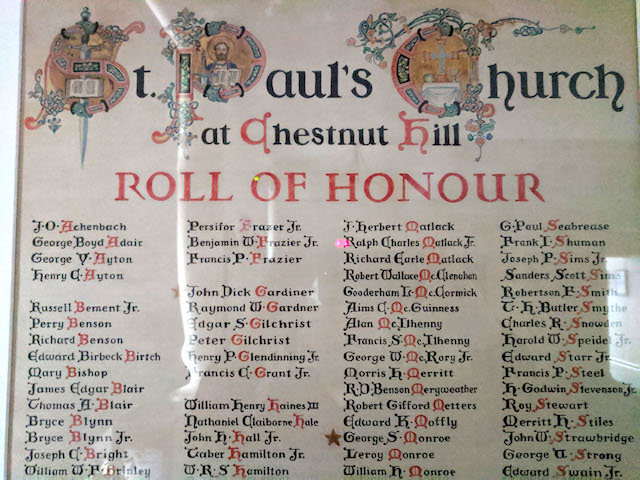 A photo of a handwritten "Roll of Honour" scroll that will be rededicated at St. Paul's.

Each year, many churches pause on All Saints Day to remember loved ones who are no longer with us. That day is typically the Sunday nearest to Nov. 1. A list of the departed (a necrology) is either printed in the church bulletin or read aloud as the congregation gives thanks for their lives, service and legacy.

On Sunday, Nov. 3, St. Paul’s Episcopal Church will celebrate All Saints Day by rededicating a handwritten Scroll of Honor to the local veterans who served in World War II. Their sacrifice and courage to fight for freedom and democracy against the forces of bitter nationalism and religious persecution has not been forgotten. The families of many of the soldiers included still live in our community and will be joining the service.

We invite everyone to gather at 10:30 a.m. as we remember them, their courage and belief in a better future for all of us. What we enjoy and many of us even take for granted will be remembered at St Paul’s, and the Scroll will move from its original place in the parish hall to a more prominent location in the church sanctuary.

Coincidentally, St. Paul’s also recently celebrated the anniversary of the building of our second church, which was consecrated on Oct. 15, 1865, six months after the assassination of President Lincoln. As the nation began to heal from the ravages of civil war, the consecration of a little sanctuary on top of Chestnut Hill was a powerful symbol of reconciliation.

Around that time, almost 20,000 young Civil War soldiers were cared for just down the road at the huge Mower General Hospital, which then occupied 27 acres in what is now the east side of Chestnut Hill. Many local residents visited and took care of the veterans of America’s worst war.

Similarly, last year on the 11th day of the 11th month at the 11th hour, the world stopped for a few moments of silence to honor those who died in World War I.

These anniversaries offer us all an opportunity to remember the continued human, emotional, spiritual and economic cost of war, and those who return from foreign wars, their families, friends and neighbors. Let us support them as we all strive to live in peace and build a more just world.