Springfield Township resident Sue Crathern (right) received a standing ovation after sharing the story of the loss of her son to opioids in February. Crathern was one of nine panelists to speak to a … 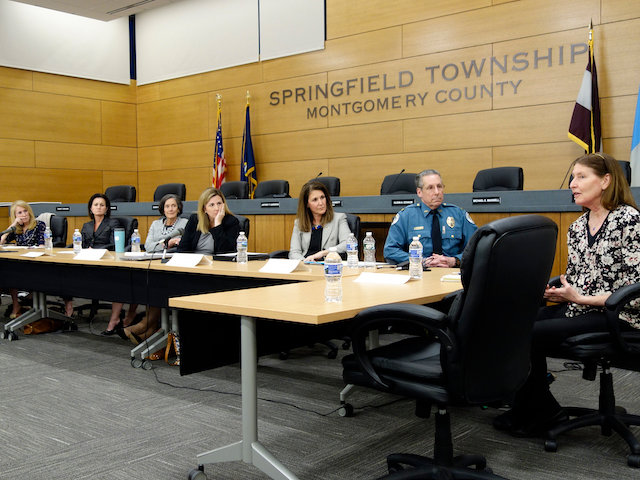 Springfield Township resident Sue Crathern (right) received a standing ovation after sharing the story of the loss of her son to opioids in February. Crathern was one of nine panelists to speak to a standing-room-only crowd at a town hall meeting on opioids on May 23. (Photo by Barbara Sherf)

While much attention has been given to the opioid epidemic in Philadelphia, officials in Montgomery County say the suburbs have not been spared the heartache of the disease of addiction and the fallout on families.

In a standing-room-only crowd in Springfield Township last Thursday night, May 23, nine panelists participated in a forum set up by local District Justice Kate McGill. The purpose was to inform the public about the local crisis and get the message out about efforts to provide support for relatives and friends of addicts. While there were many numbers bandied about, there were also parents who put faces to the stats in hope of taking the stigma out of opioid abuse and addiction.

Springfield resident Sue Crathern, who lost her son to opioids, was the only township panelist to speak in the two-and-a-half hour forum. Crathern said she felt compelled to share her story publicly in an effort to shine a light on a newly established parent support group to help other families deal with all kinds of addictions.

“My journey started four years ago when my son got a DUI, and upon leaving the courtroom he threw the paperwork in the trash,” she said. “He had periods of sobriety and relapse, and I knew I needed to get help for myself. I stumbled into a parent support group that was life-changing for me as I heard from other parents who had traveled a similar journey.

“My son overdosed on heroin last Valentine’s Day and, while my heart is aching, my head knows addiction is a disease, and I encourage anyone suffering from a similar situation not to isolate themselves, even if your loved one isn’t ready to face up to their addiction.”

Crathern found and is active in a group called Springfield Township Opioid ACTION Committee started by Barbara and Robert Senst, who lost their son, Jake, in November of last year after the 18-year-old overdosed on fentanyl, morphine and opioids.

“If someone had stepped up and told us about our son’s addiction, there might have been a better outcome,” Barbara said during a question and answer session after the panel discussion. “We tried to intervene, and drug addicts are never willing to ask for help. As parents, when he turned that magical age of 18, we had no jurisdiction. We were waiting in the lobby of hospitals and weren’t able to advocate for him directly.”

Robert continued, “While I appreciate all of the efforts of you panelists, there is a lot of dysfunction in the system. The information shared here tonight did not filter down to us, and we are trying to get this information down to other families at the local level to hopefully make a difference.”

After Crathern shared her story, county and township officials discussed the state of the local opioid crisis.

Val Arkoosh, a Montgomery County Commissioner, Springfield Township resident and physician, said the county formed a task force in 2014 to combat the problem.

“The number of overdoses spiked in 2016 with 249 lives lost,” she said. “In 2018, that number came down to 210 lives lost, but just ask any parent or family member, because even one death due to a drug overdose is one too many.”

Arkoosh said that all of the police departments in the county’s 50 municipalities now carry the life-saving Narcan spray and that 2,000 doses have been delivered since 2017, saving a thousand lives.

Arkoosh said that if someone is treated for an overdose in one of the nine county hospitals, trained and certified recovery specialists are now in place in a pilot program with the state to help manage the addiction and get the individual into treatment before being discharged from the hospital. The goal of the program is to have one hospital that has a recovery specialist in place 24 hours a day, seven days a week while continuing to expand the drug courtroom so that those with addictions wind up in treatment and not in jail.

“This is a disease,” Arkoosh said. “It is not a moral failing or bad parenting. We need to combat addiction just like we would with any other disease like asthma, high blood pressure or diabetes – with public education and forums like this.”

Springfield Police Chief Michael Pitkow noted that even though the township is only 6.5 square miles with 20,000 residents, by sitting on the Emergency Medical Services Committee at the county level, he had access to the numbers that illustrated the township’s opioid problem.

Pitkow said that since the inception of the Naloxone program in 2015, Springfield Township is ranked 17 of 38 reporting police departments.

While those numbers have been in decline, Pitkow noted that the problem is far from over and related the story of how officers responded to an overdose last month near the Paper Mill Road exit of Route 309.

“We administered not one, but four doses of Naloxone to revive the individual who probably had fentanyl in his system,” Pitkow said.

Dr. Nancy Hacker, superintendent of Springfield Township schools, detailed public education programs put in place in recent years to give students information about addiction as early as the sixth grade.

During the question and answer period, Katie Quigg, a 2016 graduate of Springfield High School, who was friends with Jake Senst, said the education programs put in place needed some real-world input.

“The way they educate in Springfield is all wrong,” she said. “It should not be about scaring the kids, because that doesn’t work. People come out of Springfield and they are still doing massive drugs. We need to get someone in who has the track marks and who has dealt with addiction.”