Spring cleaning that mountain of e-waste

Americans are addicted to their electronic gadgets. Even I have to admit that I secretly long to buy a new iPhone, despite having a relatively new Samsung Galaxy S6. According to the Environmental …

Spring cleaning that mountain of e-waste 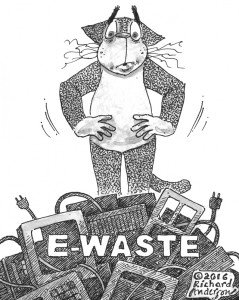 Americans are addicted to their electronic gadgets. Even I have to admit that I secretly long to buy a new iPhone, despite having a relatively new Samsung Galaxy S6.

According to the Environmental Protection Agency, the average American household owns more than 20 electronic products. In fact, according to Earth911, the United States produces more e-waste, short for electronic waste, than any other country.

Many people may not know that, thanks to the Pennsylvania Covered Device Recycling Act (CDRA) passed in 2010, it is illegal to throw out electronic devices such as televisions, old VCRs, DVD players, stereos, copiers, fax machines, tablets, monitors, laptops and cell phones.

The law also requires that manufacturers of the devices provide for the collection, transportation and recycling of these devices by establishing one-day events, permanent collection programs or mail-back programs for consumers. Under the law, manufacturers are required to work with an electronics recycling company that is properly licensed and certified to handle and process electronic waste.

Unfortunately, more often than not, these items end up in landfills creating toxic dumps. Many electronic devices contain hazardous substances that when burned at low temperatures release extremely toxic materials, such as halogenated dioxins and furans, which are some of the most toxic substances known to mankind. Research has shown that toxic materials in electronics can cause cancer, reproductive disorders, brain and kidney damage and many other health problems.

Despite this, only about 12.5 percent of e-waste is recycled, according to the EPA. And those that are recycled are not always recycled safely. In the U.S., it is still legal to export e-waste to developing countries like India, where –  too often –  children end up digging through heaps of burned plastic and contaminated soil searching for anything salvageable.

Even more shocking, by not recycling electronics responsibly, Americans are literally throwing away billions of dollars a year.

According to the EPA, for every one million cell phones that are recycled, roughly 35,274 pounds of copper, 772 pounds of silver, 75 pounds of gold and 33 pounds of palladium can be recovered.

According to an article posted on www.techrepublic.com, “One ton of circuit boards is estimated to contain 40 to 800 times more gold than one metric ton of ore.”

People would never throw away gold jewelery and other valuable items, so why do we do it with our outdated electronics?

As Earth Day approaches, I am reminded of the three Rs: Reduce, Reuse and Recycle. As I attempt to responsibly recycle the iron mountain of discarded electronics in my basement, I challenge you to do the same.

Many stores like Best Buy and Staples will recycle electronic equipment for free. Instead of purchasing new electronics, consider buying refurbished or second-hand electronics. Consider donating your gently used mobile phone to help soldiers call home by donating them to the Cell Phones for Soldiers organization by going to its website at www.cellphonesforsoldiers.com/get-involved/donate-phone or emailing info@cellphonesforsoldiers.com. Consumers can find more information on registered manufacturers and where to recycle their covered devices at www.dep.state.pa.us, keyword: Electronics Recycling.