When Skirt Boutique owner Maureen Doron had an opportunity to donate funds to Emlen Elementary through her ‘Skirt for School’ fundraiser, it was a chance she couldn’t pass up. 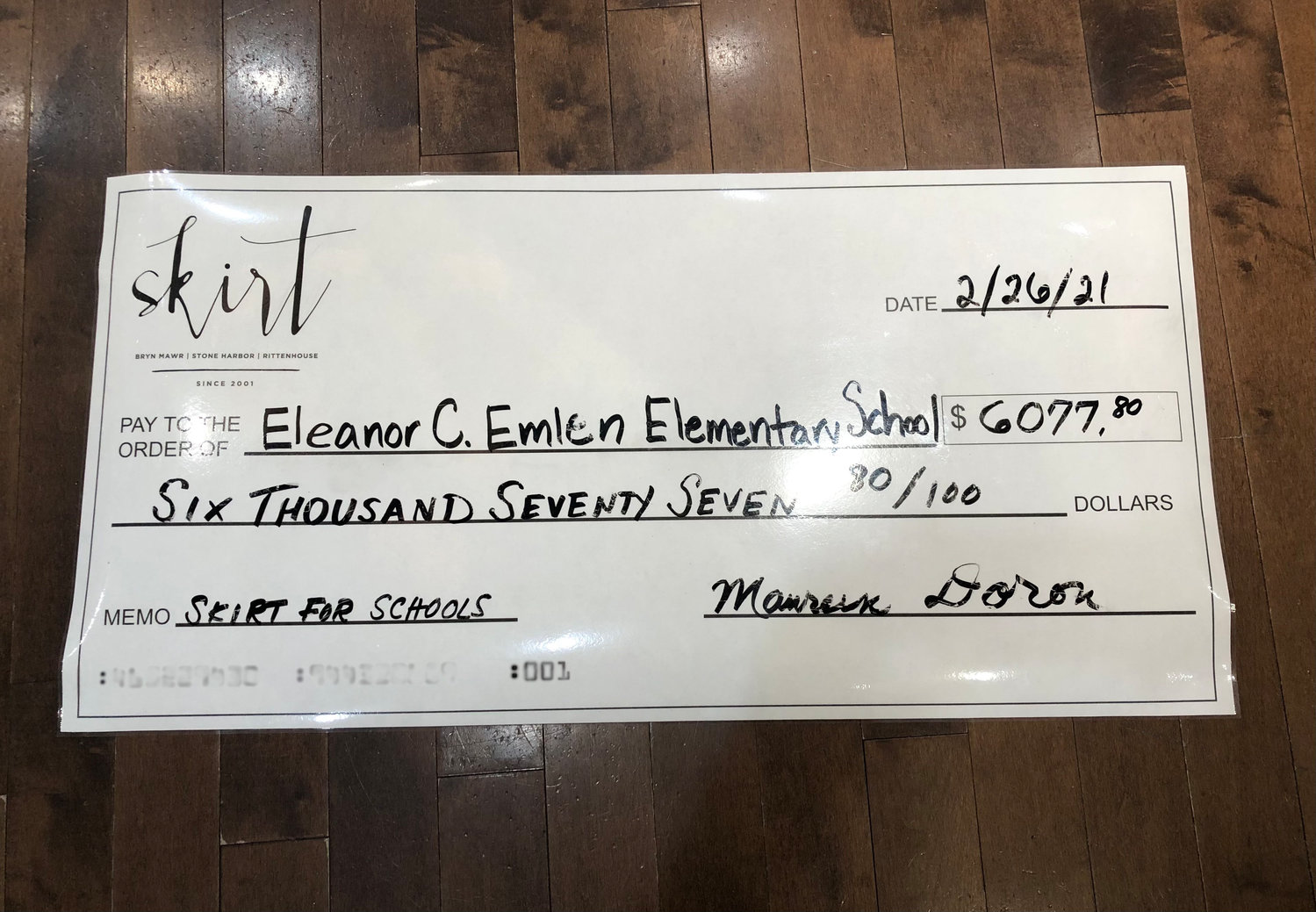 Maureen Doron, whose brother Chris Conallen teaches at Emlen School, donated $6,000 to the school through her shop’s annual Skirts for School fundraiser.
Posted Thursday, March 25, 2021 10:06 am
by David Hunt

When Skirt Boutique owner Maureen Doron had an opportunity to donate funds to Emlen Elementary through her ‘Skirt for School’ fundraiser, it was a chance she couldn’t pass up. Her brother, Chris Conallen has been a fourth-grade teacher at the Mt. Airy school for nine years.

“We love hearing about his school, students, and his principal, who he loves and respects so much,” Doron said. “We are very proud of him. It was great to see him do what he was really meant to do, which is be an awesome teacher, so that was really touching for me.”

The $6,000 donation was presented by Doron and her colleagues during a Black History Month program at Emlen that took place on Zoom. Conallen saw the donation as an opportunity to explain percentages and fractions to his students in a real-world manner, Doron said.

Skirt Boutique is a women’s clothing boutique with two locations: one in nearby Bryn Mawr and another in Stone Harbor, NJ. Doron, who lives in Gladwyne, started the business 20 years ago.

Six years ago, as Doron’s clients came and went from her store, she noticed their passion for raising money for their school’s academic and athletic program. Doron decided to get involved with the ‘Skirt for School’ program.

The program is a five-day fundraiser that allows local families to raise money for their children’s schools. During the fundraiser, Skirt Boutique will donate 10% of each purchase made to the school of the client’s child. At the end of the fundraiser, and when a winner is chosen, Skirt Boutique will match the total amount raised by the winning school’s families. This gives the winning school a 20% donation, while all participating schools still receive the 10% donation.

‘Skirt for School’ has become a popular promotion, according to Doron. For each five-day fundraiser, there is a leaderboard in the store updating clients on the school currently winning. Clients get their friends, family, and fellow community members involved in the action by sharing pictures of themselves shopping at Skirt Boutique on social media in hopes it will increase their chances of winning the contest, according to Doron.

Throughout the ‘Skirt for School’ program’s six-year run, it has benefited 20 different schools in the Greater Philadelphia area. Even with such a long list of beneficiaries, Doron knew there were other schools in her area that needed help.

“I loved being involved with my community and writing all these big checks to schools, but there were definitely schools close to us that needed the resources even more,” Doron said. “I took the winning donation of 20% and matched that number to both the winning school and a school in Philadelphia’s School District (Emlen Elementary).”

The winner of this year’s ‘Skirt for School’ program was The West Hill School, a preschool in Bryn Mawr.

This is the first time ‘Skirt for School’ has donated to a school in the Philadelphia School District.

“We were super excited when Maureen reached out to us to let us know that she decided to pick a Philadelphia School District school this year to contribute the funds that her ‘Skirt for School’ fundraiser had raised,” Principal Thomas said. “We were honored to have her and her colleagues with us.”

The $6,000 donation will be used to purchase hands-on science kits along with a collection of books centered around diversity and different cultures, according to Principal Thomas.

For more information on Skirt Boutique and their ‘Skirt for School’ fundraiser:  shop-skirt.com/