December 7, the girls of Germantown Friends School and Springside Chestnut Hill Academy met on the basketball court for the second time in less than a week. With many reserve players on the floor for both teams as the final frame wore on, the gap between the teams grew by just two points for the 51-33 final. 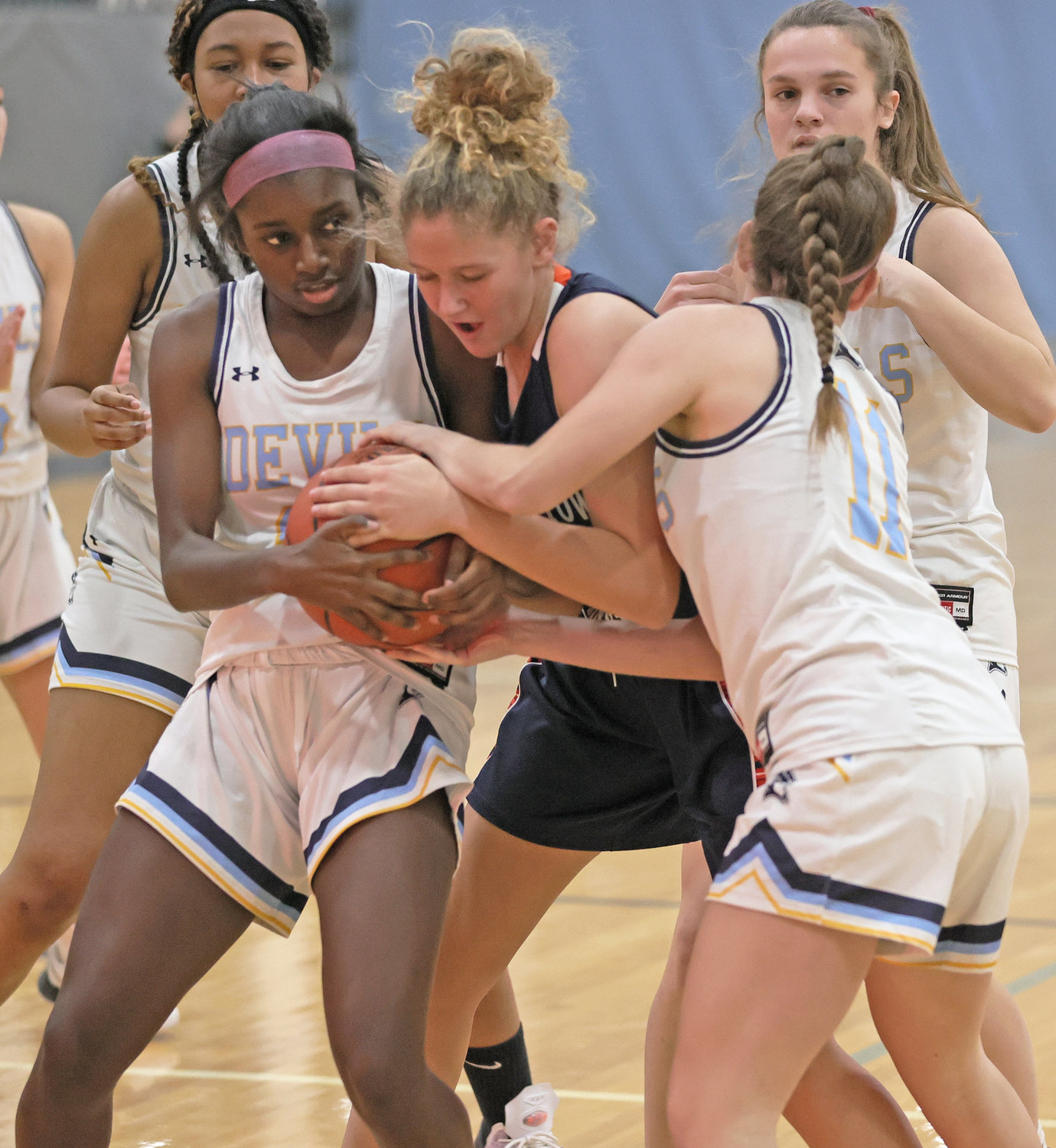 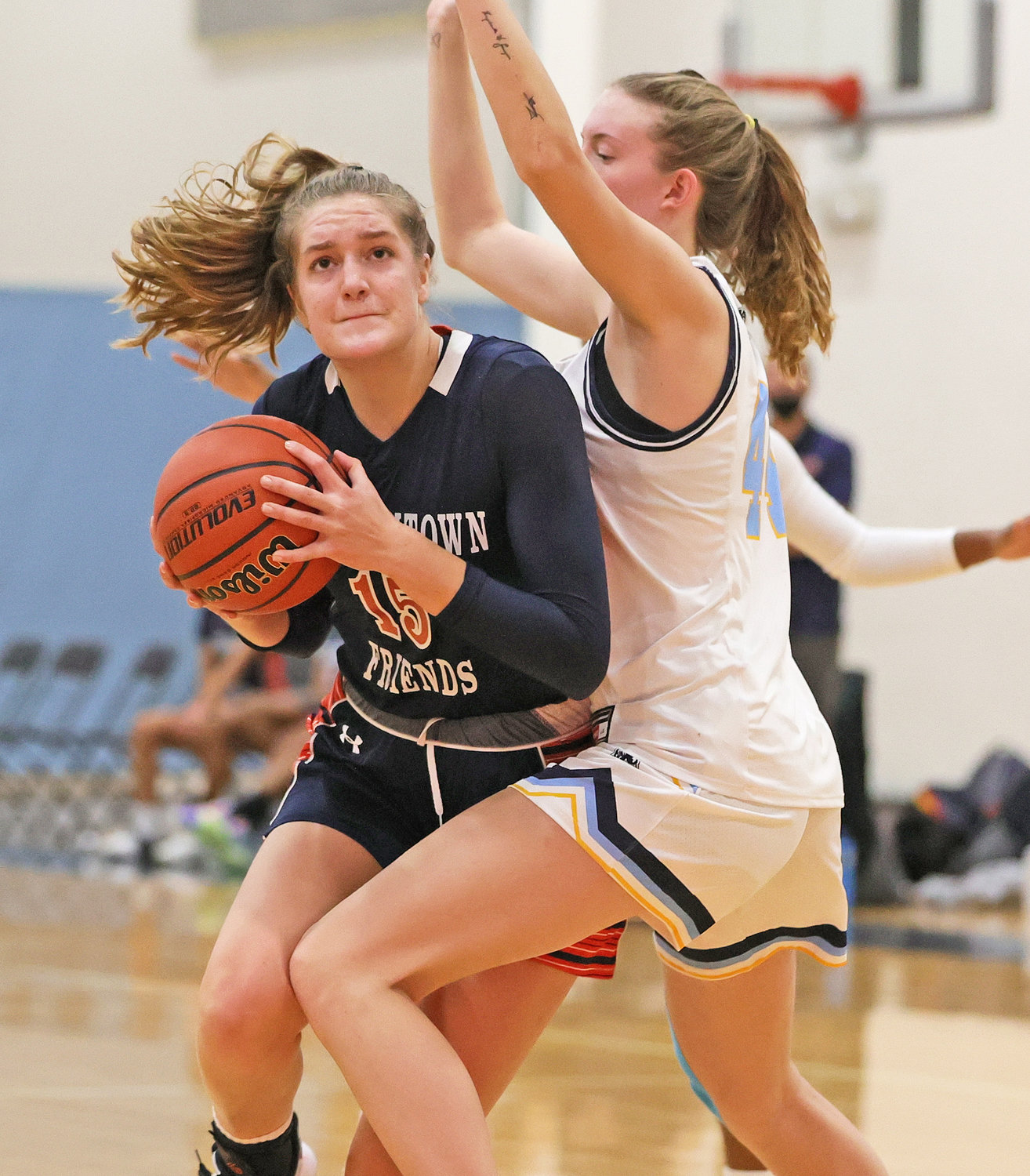 Tuesday, December 7, the girls of Germantown Friends School and Springside Chestnut Hill Academy met on the basketball court for the second time in less than a week. In the initial encounter on a neutral court at Shipley School on December 3, the GFS Tigers prevailed 42-24 in a game that was part of the annual Friends-Inter-Ac Challenge.

The Blue Devils were hoping to fare better in SCH's Vare Field House four days later, but the final margin for the victors turned out to be exactly the same, with Germantown winning 51-33. The Tigers came away with a 3-1 overall record, while SCH was 0-3.

One of the players Germantown Friends graduated from last season was guard Desiree Norwood, who began playing for the Tigers' varsity as an eighth-grader. This year a close-knit senior class includes two other athletes who are now five-year varsity players, 6'3" center Clare Meyer and guard Martina Kiewek.

Meyer will go on to play at Dartmouth College, joining current Big Green freshman Grace Niekelski from Mount St. Joseph Academy. Kiewek plans to study in the Netherlands, and is looking into the possibility of playing professional basketball there.

Three more current GFS seniors, Cadence Kelly, Caroline Rickels, and Allyson Katz, appeared on the varsity roster as freshmen, so the Tigers' team leaders are very used to playing with one another. Five juniors and

three freshmen round out the line-up this winter.

Head coach Mike Lintulahti and longtime assistant Justin Minter are back for their sixth go-round with the Tigers, and joining them is former GFS player Ajai DeBose ('17).

Flo Hagains is heading into her sixth season at the helm of the SCH squad, and assistant coach Antowine Graham has been associated with the program even longer than that. Joining the staff a few years ago, assistant Martine Fortune played at Shipley School and at Georgia Tech ('19). SCH faculty member Jared Tang, a Californian who has a background in basketball and soccer, is helping out this season.

Blue Devils shooting guard Ava Chavez, a junior who made her varsity debut in eighth grade, is a rarity in the SCH ranks for being a primary basketball player.

Two of the team's four seniors will be playing different sports in college. Soccer standout Maya McDermott already committed to Syracuse University as a junior, and Brooke Gyllenhaal will be playing lacrosse at Sacred Heart. Their 6'2" classmate, Layla Sawyer, did not play basketball last winter, but was on the team when she was younger. The fourth senior, guard Caroline Chiliberti, plans to focus on nursing school after leaving SCH.

The Blue Devils' soccer team, which ended its season ranked eighth in the Prep Soccer national poll, has also contributed a tough defender to the hoop squad in the person of junior guard Julia Thomson.

Two new arrivals at Springside Chestnut Hill started in last Tuesday's home game. Junior Faith Scally found herself looking for a new school after John D. Hallahan Catholic High School in center city closed for good at the end of the 2020-21 school year. A basketball guard, Scally is also a softball shortstop. Another guard, still only an eighth-grader, is Mikaiya Durham, who came to SCH from Wissahickon Charter School in northwest Philadelphia.

Giving SCH height in the paint along with Sawyer is six-foot sophomore Zahkiyyah Frazier, a returning varsity player. Also back is junior guard Tatyana Hall, who has logged a lot of varsity minutes.

Last Tuesday, the Blue Devils kept pace with the Tigers throughout the first quarter. Early baskets by visitors Kiewek and Meyer were answered with two by Chavez. A trey by Kiewek was matched by Durham for the host team, and then Frazier scored to give Springside Chestnut Hill its first lead, at 9-7. It would turn out to be the Devils' only lead.

Germantown got out of the first quarter with a 10-9 edge thanks to a late three-pointer from the top of the key by Kiewek. Meyer scored from the paint to open the second round, and Kelly put in a field goal for a 14-9 advantage for the Tigers.

SCH saw Sawyer score in transition off a pass from McDermott, then Kelly connected for the Tigers on an inbounds sequence and Kiewick made good on a driving lay-up and on a free throw awarded on the play. The Blue Devils' inside game was hampered when Frazier committed her third foul and had to come off the court with 3:36 remaining in the first half, when the score was 19-11.

A 6-2 closing run for Germantown Friends set the halftime tally at 25-13, with the Devils missing some late free throws that could've trimmed the gap to an even 10 points.

Kiewek led all scorers at the break with 13 points, then Meyer came on for 17 after halftime. The GFS post only scored once in the first six minutes of the third stanza, but Kiewek and Kelly kept the Tigers' lead in low double digits. It was 33-23 with two minutes remaining in the third, then Meyer put in three straight field goals, with two inside scores followed by a short baseline jumper.

Once more SCH ended a quarter with a frustrating offensive possession, this time missing two shots from the paint to see the score settle at 39-23 for the start of the fourth period.

With many reserve players on the floor for both teams as the final frame wore on, the gap between the teams grew by just two points for the 51-33 final. All of Germantown Friends' points came from three players, Meyer (23), Kiewek (19), and Kelly (nine). The SCH scoring was spread out among eight different Devils, led by Chavez with seven points and McDermott and Sawyer, with six apiece. Chiliberti and Durham and each scored four.