SCH wrestling leads late, then gets passed by Fords

For SCH's Inter-Ac League contest against Haverford School, because in half of the 14 weight classes, no more than one wrestler stepped out onto the mat.

SCH wrestling leads late, then gets passed by Fords 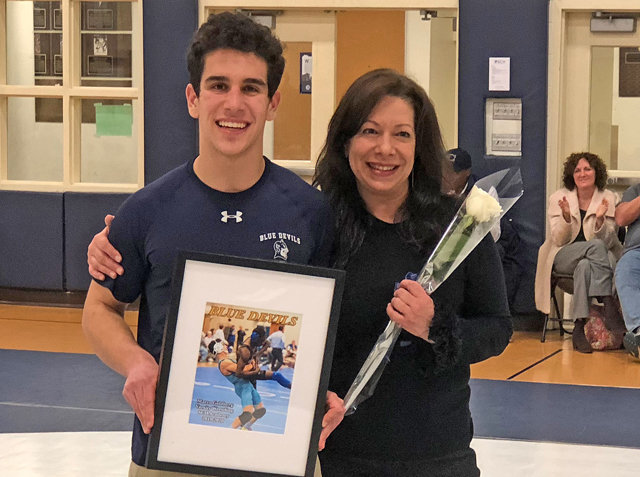 It seemed appropriate accompaniment for SCH's Inter-Ac League contest against Haverford School, because in half of the 14 weight classes, no more than one wrestler stepped out onto the mat.

Even though SCH forfeited four matches to Haverford's two (there was a double forfeit in the 160 lb. weight class), the host Blue Devils were leading the meet, 30-27, with two bouts to go. The Fords went ahead with a pin and then captured the last match by technical fall to win, 38-30.

The outcome allowed Haverford to finish the single round of league meets with a record of 2-3, while SCH wound up 0-5. The Blue Devils still finished with a winning record in dual meets overall, at 10-9.

The last match won by the Blue Devils on Friday ended with a pin at 195 lbs. by one of two seniors on the team, Will Neverosky. Concussion problems have hampered the other 12th-grader, Marco Goldberg. A varsity wrestler since eighth-grade, Goldberg registered his 100th career victory at the very start of the season, then retired.

Last Friday's league finale began at the light end of the scale, and in the first four weight classes wrestlers made solo trips to the center of the mat to accept forfeits. SCH sophomore Jack Sanderson got one at 106 lbs., but then three in a row were picked up by Haverford, which sent out Jay McConnell (113), James Campbell (120), and Andrew Parente (126).

Although this put the visitors' up 18-6 in the team score, the Blue Devils recouped a couple of points at 132 lbs. thanks to freshman Tylor Stubbs. He recorded two takedowns during the first two periods, while the Fords' Zach Powell picked up one for an escape. The 4-1 score held up through the third period, when Stubbs started on the bottom and could not escape, but also refused to be turned by Powell.

The Blue Devils dropped farther behind again, 24-9, when they forfeited at 138 lbs. to Haverford's Drew Loughnane.

Following a scoreless opening round at 145, SCH freshman Micah Ford and Haverford senior Sam Reisbord started on their feet once more in the second period. Reisbord scored a takedown with just over 50 seconds elapsed for the only points of the period. He was allowed to escape by Ford at the start of the third frame, then neither grappler could complete a takedown and Reisbord claimed a 3-0 decision.

Springside Chestnut Hill acquired six team points and tightened the tally to 27-15 when freshman Tre Stubbs accepted a Fords forfeit at 152 lbs. The score didn't change as neither team chose to perform in the 160 lb. weight class.

Blue Devils 10th-grader R.J. Moore led 2-1 after the opening period at 170, scoring a takedown but then giving up a penalty point for locking hands. It was 2-2 after two rounds after an escape by Ben Trucksess of Haverford, but Moore escaped himself at the start of the third and went on to a 7-5 decision.

The Blue Devils now gathered momentum. At 182 lbs., SCH junior Tyler Guzik used a headlock to take Sean Dougherty down onto his back, and Guzik got the pin with 36 seconds left in the first period. 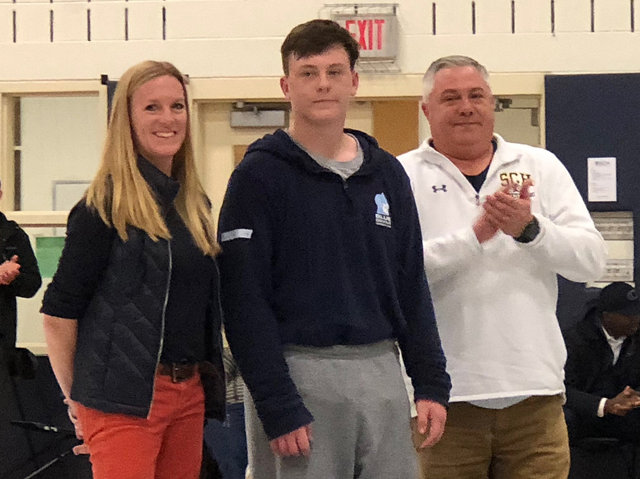 Neverosky followed with another first-period pin, matting the Fords' Ian Rush with 20 seconds to go. The home team now held the lead (30-27) for the first time since the very beginning of the meet.

This didn't last long, as Haverford moved back in front 33-30 with Bill Brosko's second-period pin at 220 lbs. Piling up back points in the first period against SCH freshman Grant Guzik, Brosko led 13-0. From a neutral start in the second round, he took Guzik down onto his back, and the official had the discretion to signal a pin without first awarding takedown points that would've ended the bout through a 15-0 technical fall.

Haverford's 285-pounder, Kwaku Adubofour, also built up a 13-0 advantage in points, this time over the course of two periods. From the bottom position, SCH sophomore Mac Levin escaped at the start of the third period. After being taken down, he escaped again, making the score 15-2. Just before the middle of the period, Adubofour scored another takedown, creating the 15-point gap required to end the match by tech fall.