Good things came in threes for the girls of Springside Chestnut Hill Academy last Friday, when the varsity field hockey, soccer, and tennis teams all hosted rivals from Penn Charter. 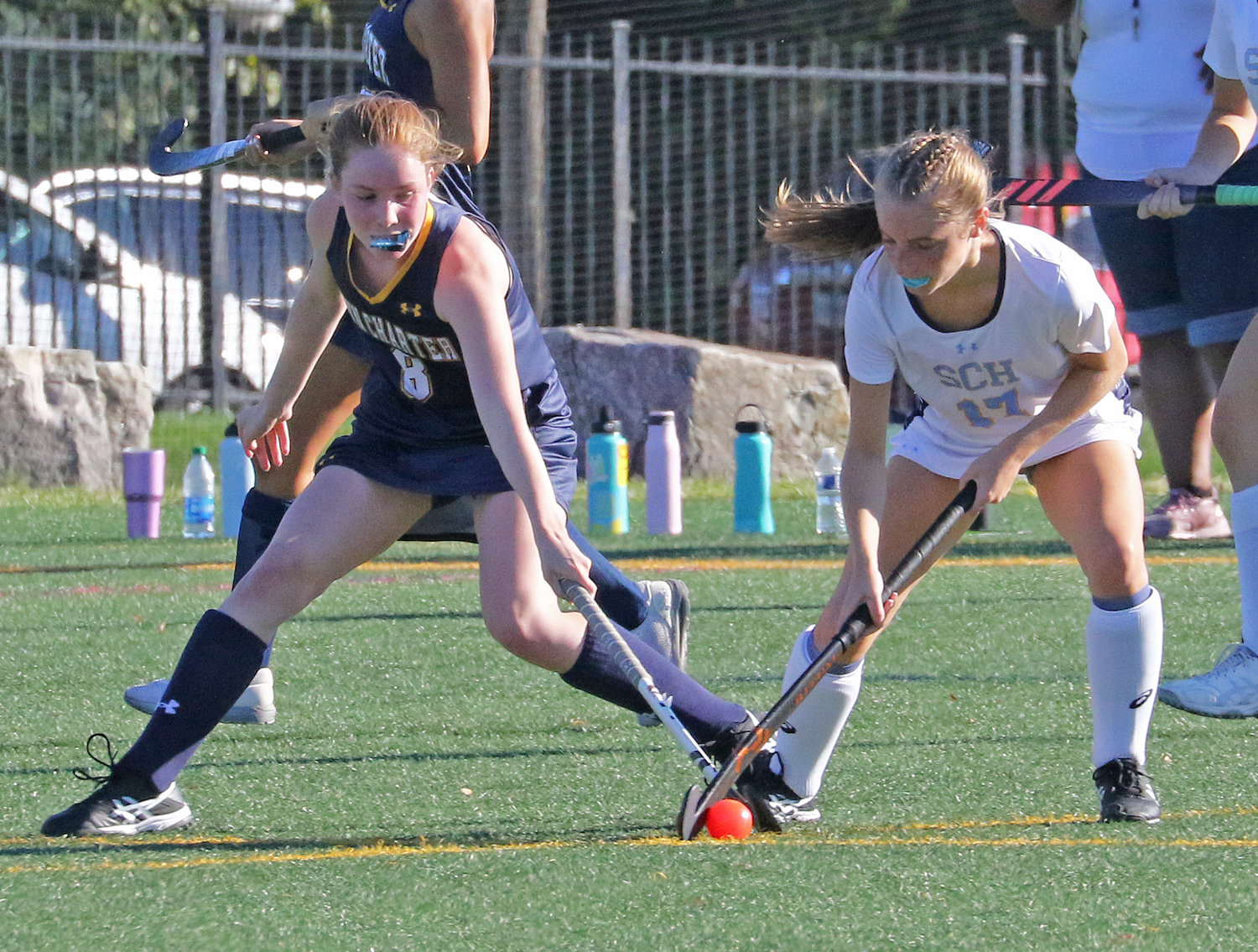 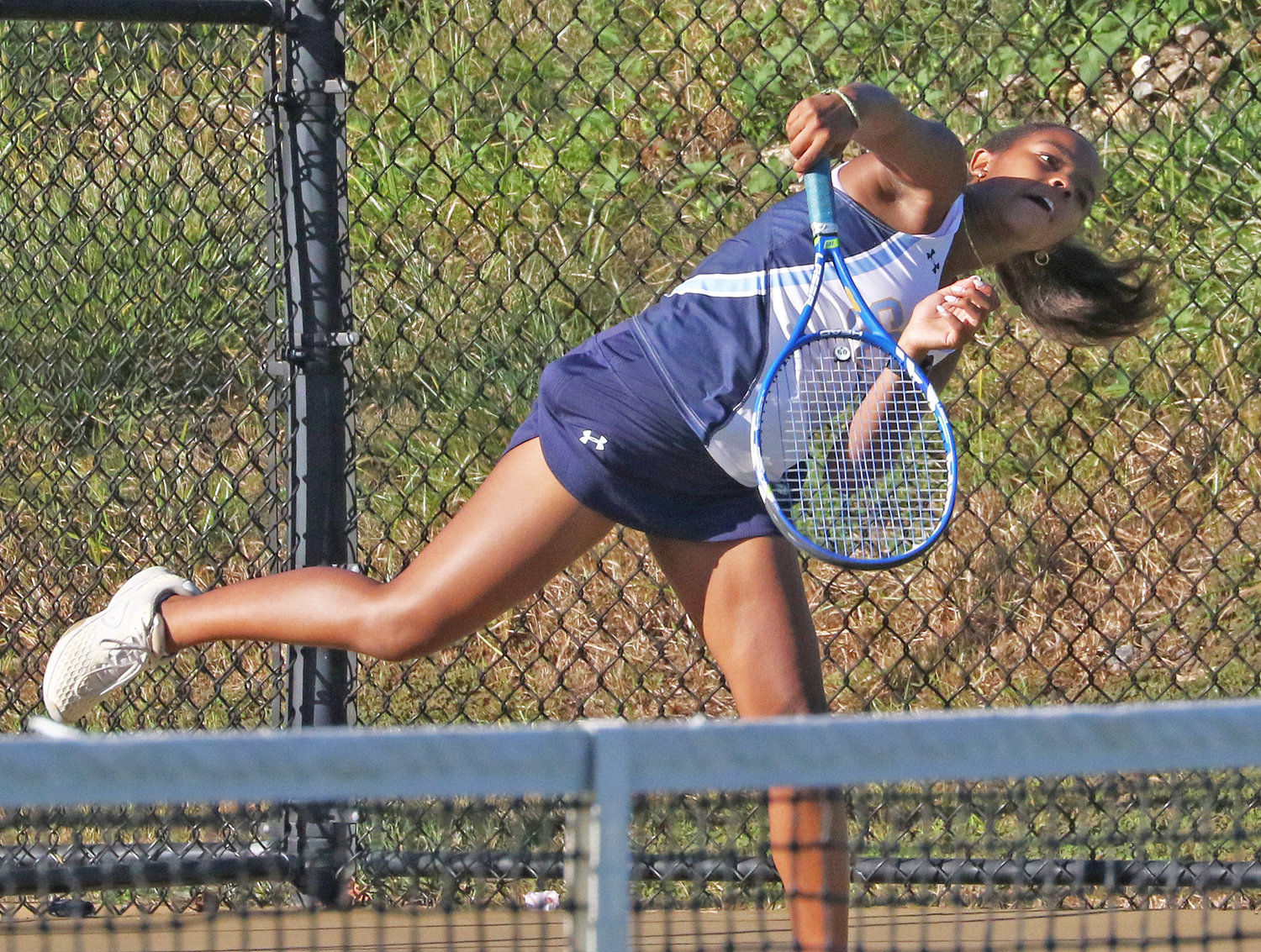 On her way to a pivotal victory, SCH sophomore Ameara Smith follows through on a serve in the third singles match.
Tom Utescher 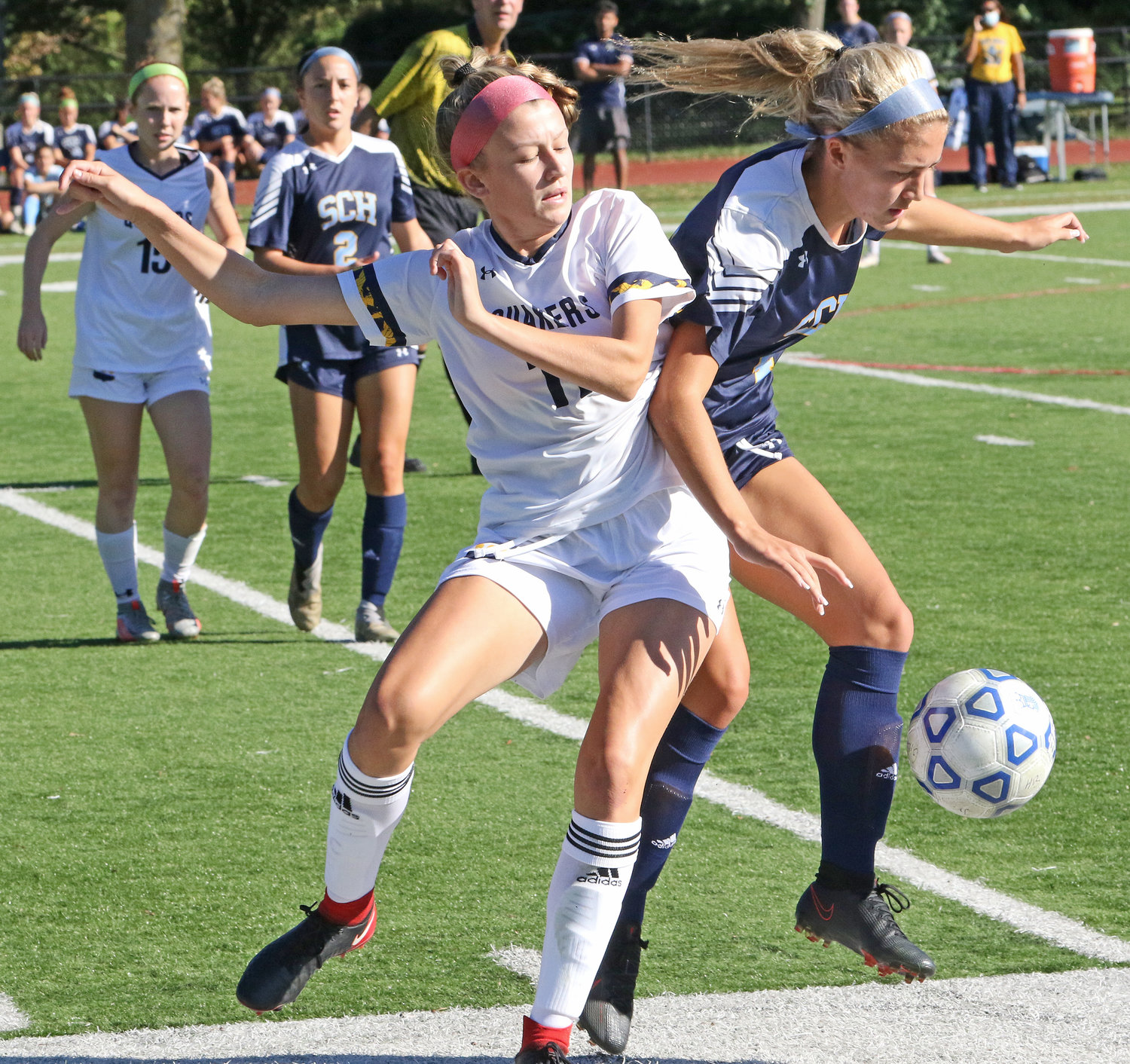 Good things came in threes for the girls of Springside Chestnut Hill Academy last Friday, when the varsity field hockey, soccer, and tennis teams all hosted rivals from Penn Charter.

Although the Blue Devils got it done in different ways on the fields and the courts, all three squads emerged victorious against the visiting Quakers.

The soccer team remained unbeaten, not scoring before halftime, but then finding a way to make the offense click for a 5-0 win. On the hockey field, the Devils found the Quakers' cage in the opening quarter and then added an insurance goal in the third for a 2-0 outcome, while on the tennis courts it took an uplifting effort from a determined sophomore to give SCH a 4-3 decision over PC.

Penn Charter sophomore Colleen McLafferty (left) crosses sticks with senior Hannah Pierce of Springside Chestnut Hill.
Emilee Ehret is now in her third season as head field hockey coach. A new assistant this year is Kate Toll, who was a year ahead of Ehret over at Mount St. Joseph Academy. Overall it's a young squad with only four seniors, and two of the mainstays, twins Colleen and Devyn Conlan, started for the varsity last fall as eighth-graders.

The Penn Charter sticksters arrived on Friday with a 4-0 record that included a 2-1 win over Shipley School on Wednesday. The Blue Devils had opened their season with a 4-1 victory over Shipley, but then they suffered consecutive shutouts. After losing a non-league bout against Lawrenceville School, 2-0, they fell 3-0 at Agnes Irwin last Wednesday in their Inter-Ac League opener.

On Friday the score remained 0-0 through much of the first quarter, but with 1:58 remaining Springside converted on a penalty corner. Junior Caroline Foley earned an assist on the marker by senior Hannah Pierce. The two are team tri-captains along with senior Bella Tulio.

The 1-0 count held up until halftime, then Devyn Conlan scored just 45 seconds into the third quarter to lock in the final score. The other Conlan sister accumulated five saves in goal for the winners, while Penn Charter junior Chloe Pinto made four stops at the other end.

On her way to a pivotal victory, SCH sophomore Ameara Smith follows through on a serve in the third singles match.
Last Friday's contest was the Inter-Ac opener for SCH (now 3-1 overall), while the Quakers (2-3) had launched their league campaign three days earlier with a 2-5 loss to Baldwin School.

The first bout won on Friday went to the host Blue Devils, who had junior Elena Martinez and senior Lauren Gregson cruise through at fourth doubles, 6-3, 6-1. The Quakers then came back to take the lead in the team scoring with victories at the top two singles spots. Junior number one Lexi Bari won, 6-3, 6-1, and in the second spot freshman Mariah Mays triumphed, 6-2, 6-0.

The team score levelled off at 2-2 when SCH seniors Avery Allen and Katie Filshil came off the second doubles court after taking a two-sets-plus-tiebreaker contest, 3-6, 6-2, 10-4. Next, Penn Charter seemed on the verge of victory overall when senior Marissa Bruckner and freshman Bridgette Gold captured a tough third doubles bout, 6-7 (1), 6-1, 10-4.

The Quakers needed to win just one of the two matches still in progress to carry the day, but the Blue Devils wouldn't allow it. Two juniors for the host team, Winslow Tracy and Isabella DeCesare, prevailed at first doubles, 6-2, 7-6 (4) to lift Springside into a 3-3 tie.

Meanwhile, SCH sophomore Ameara Smith secured the first set in the third singles match, 6-4, but then she rolled her ankle during the second set, losing that round, 4-6. Taped up by one of the excellent athletic trainers at Springside Chestnut Hill, she returned to the court for the super tiebreak session and gutted out a 10-8 victory, putting the Blue Devils over the top.

Smith has a 3-1 record so far at third singles. Even this early in the season, the Blue Devils' line-up has changed around in various matches, and the head coach, Ryan Gargullo, says that a number of players have performed well no matter what the configuration.

First doubles is 3-1, with Tracy in that combo for all three victories, just as Filshil has been part of three second doubles wins. Fourth doubles has gone 3-1 with Gregson playing in that flight in every match.

In Soccer, offensive momentum belonged to Blue Devils in first half

The Blue Devils' Lauren Sullivan (right) tries to maintain possession of the ball as fellow senior Maddie Shoup of Penn Charter cuts in.
Going into the soccer contest last Friday, Springside Chestnut Hill was 4-0 overall and Penn Charter was 1-1; both teams had won their Inter-Ac League openers. PC was edged by Archbishop Ryan in early September, 3-2, then won 4-2 in its Inter-Ac debut at Baldwin School last Tuesday. SCH had also played Ryan, winning 3-0. The Blue Devils' closest game in three non-league contests was a 3-1 victory over Archbishop Wood.

Last Wednesday, SCH kicked off its league season with a 6-2 road win over Agnes Irwin. It took the Devils' offense a while to fire on all cylinders, with head coach Maria Kosmin reporting that her team only led 1-0 at halftime. Having gone 12-0 in the last official Inter-Ac season in 2019, the Blue Devils are aware they have a target on their backs every time they take the field against a league opponent.

Darci Borski, who has coached Penn Charter for the past eight seasons, took a leave this fall. Ashley Maher, an assistant coach throughout Borski's tenure, is running the team this fall, and another familiar assistant, Chelsea Czarnik, is back on the PC sideline.

Junior goalie Bella Toomey injured an ankle and was unable to play, so senior Gabrielle Polite had to go it alone in the Quakers' cage. She and her defense kept the high-powered SCH attack off the scoreboard for about 50 minutes.

Still, much of the offensive momentum belonged to the Blue Devils in the first half, with junior Lisa McIntyre and senior Maya McDermott (who'll sign with Syracuse) posing threats almost from the get-go. Junior defender Julia Thompson provided excellent support in transition along the left wing.

Midway through the first period, a PC foul above the middle of the 18-yard-line gave SCH a free kick. and Charter set up a defensive wall. The hard-hit Springside kick by senior Lauren Sullivan caromed sideways off the face of Quakers senior Maddie Shoup. Whether on the hockey and lacrosse fields or the basketball court, Shoup tends to get banged around a lot but plays on, undaunted. She brings to mind Chumbawamba's song "Tubthumping" (I get knocked down, but I get up again; you're never gonna keep me down!).

The senior had a chance to extract a measure of revenge later on when she carried the ball across the SCH 18. Her shot tracked wide of the right post though, and eventually halftime arrived with the tally still 0-0.

It remained so for the initial 10 minutes of the second half, and then a Penn Charter offensive sortie was stymied by Sullivan and the Blue Devils countered. In the SCH transition, the ball made it up to senior Virginia Perry, who assisted on the opening goal by McIntyre.

The home team rode that 1-0 edge through the middle of the second half, and then erupted for four goals in an 11-minute span. The first two in the string came from McDermott, who first scored off of an assist from Thompson and then served in a corner kick that glanced off of a Charter defender and into the net.

A little later, Bella Brown used her solid ball control skills to deliver an assist to fellow junior McIntyre for her second goal of the day. SCH remained in control, and junior Abby Fitzmaurice converted on a free kick to cement a 5-0 final score. Yet another member of the strong 11th-grade class, Ellie Stratz, earned the shutout in goal.