GA freshman Caroline Antonacio (right) looks to pass the ball ahead to a teammate while guarded by SCH senior Grace Rorke. (Photo by Tom Utescher) by Tom Utescher A regular 50-minute lacrosse match … 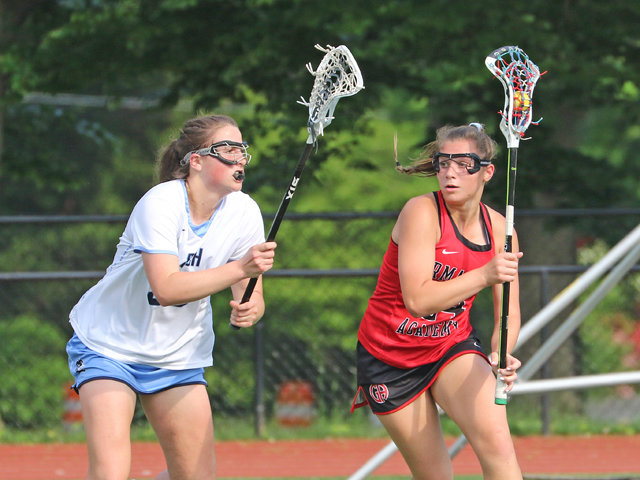 GA freshman Caroline Antonacio (right) looks to pass the ball ahead to a teammate while guarded by SCH senior Grace Rorke. (Photo by Tom Utescher)

A regular 50-minute lacrosse match turned into a two-day affair for the girls of host Springside Chestnut Hill Academy and visiting Germantown Academy in the middle of last week. The first round of last week’s heavy weather caused the contest to be discontinued about six minutes into the second half on Tuesday just as the SCH Blue Devils attained a 9-7 lead.

When the action resumed Wednesday afternoon from the point at which the clock had stopped the day before, GA scored first to pull within a point of the leaders, but that was it for the Patriots. The last four goals of the day belonged to the Blue Devils, who prevailed, 13-8.

Springside Chestnut Hill, which had won with a late goal, 9-8, in the first meeting between the teams at GA in mid-April, lifted its overall record into winning territory at 10-9, while finishing with a 4-8 mark within the Inter-Ac League.

Another 11th-grader, Zoe Torrey, made six stops in the GA goal. The Patriots, who led by three goals early in last week’s encounter, marked down a hat trick for junior Olivia Doody and two goals for sophomore Maddie Burns (a Norwood Fontbonne Academy alum). Leaving SCH, the Patriots had a 1-10 league record, with a match against the Academy of Notre Dame still on the regular season schedule.

In the Inter-Ac, GA had split in its home/away series against Baldwin School, while SCH’s four wins came from sweeps of Baldwin and GA.

Half-a-minute into the game that began last Tuesday in Chestnut Hill, GA’s Burns circled all the way around the SCH crease, emerging on the left side to score. GA won the next draw but quickly turned the ball over, and the Blue Devils’ offensive transition produced a tying goal by Prochniak.

The Patriots then put in three quick goals to go up 4-1 with only three minutes and 15 seconds elapsed in the game. The high-scoring Doody deposited the first two, then after sophomore Elizabeth Van Blarcum brought the ball across midfield and up to the attack, GA freshman Mackenzie Smith scored the visitors’ fourth goal.

With the contest still only a little over four minutes old, SCH picked up a second goal when Prochniak drove into the middle of the arc and dished the ball off to her left to the scorer, Brook. 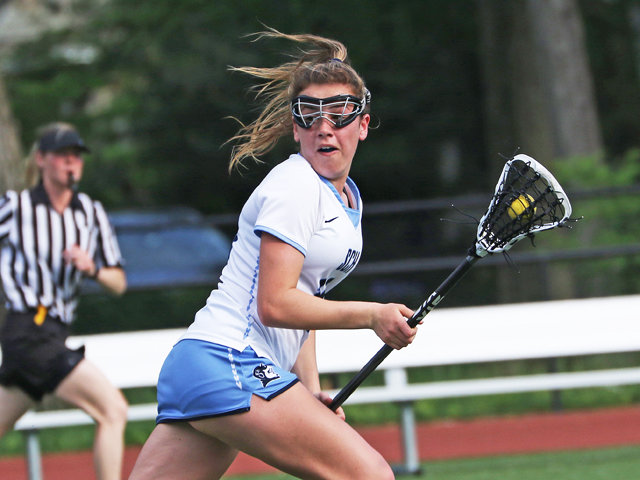 Bringing the ball upfield against GA, SCH freshman Ashley Lynch checks behind her for pursuing Patriots. (Photo by Tom Utescher)

With an assist from Burns, GA’s Doody completed a personal hat trick to put the Patriots up 5-2. The visitors came down on the attack once more, then after SCH keeper Sweitzer saved a quick-stick shot by GA, the Blue Devils put together a stretch of productive offense at the other end of the field.

Receiving the ball from junior Riley Redpath, SCH senior Grace Rorke scored on a bounce shot. The Blue Devils’ Carter, who has many moves to twist her way through a defense, recorded back-to-back goals, pulling the home team up into a 5-5 tie with 11:22 remaining in the first half.

A few minutes later, sophomore Ella Henry moved Germantown ahead again. Fouled an instant before firing into the GA goal, SCH’s Rorke was set up for a free position, since there was no continuation of play on this type of violation. On the free position shot, though, GA’s Torrey saved the ball.

SCH did get a sixth goal before the end of the first period, though, as sophomore Maggie Pearson found the net to make it 6-6 with just 15 seconds remaining.

Springside Chestnut Hill acquired its first lead of the day when junior Kianah Watson split the Patriots’ pipes 46 seconds into the second half. A few minutes later, GA’s Torrey stopped another Blue Devils shot, but the Pats then turned the ball over on their clear and SCH’s Brook scored to make it 8-6.

Three minutes in, the visitors moved the numbers on their side of the scoreboard as Doody assisted on a strike by 11th-grade classmate Charlotte Rapp. Germantown’s Torrey kept her team within one point of the leaders (8-7) by foiling a free position shot by SCH’s Redpath.

This occurred with a little over 20 minutes remaining, and at this point the thunderstorm predicted in the weather forecasts appeared imminent. As the sky darkened in the west and the wind gusted up, Springside Chestnut Hill levered its lead back to two points, 9-7, thanks to Prochniak. After the goal was recorded, the officials decided to suspend play with 19:06 left on the clock.

Since the storm wasn’t expected to blow over quickly, it was decided that the contest would be resumed the following afternoon.

When the teams went back out on the field on Wednesday, a light rain was falling, but there was no threat of the type of violent weather seen on Tuesday afternoon. GA junior Charlotte Rapp won the draw and the Patriots went up on offense. Sweitzer saved their first two shots, but GA kept possession of the ball and Burns scored with 17:28 remaining to make it 9-8.

The Blue Devils went on the attack, but sent its first few shots either over the crossbar or wide of an upper corner. One of the freshmen, Lynch (a Norwood alum like GA’s Burns), then stepped up to score back-to-back goals, sending SCH into the final 10 minutes with an 11-8 advantage.

Torrey then kept Germantown’s deficit from growing by saving several SCH shots, including one by junior Savannah Sweitzer (Delaney’s twin sister) and one from point blank range by Brook.

Still, the Blue Devils had possession of the ball for much of the remainder of the game, and the Patriots seldom displayed a great sense of urgency in trying to get it back. Springside Chestnut Hill added its last two goals in the final minute, one by Brook with an assist from her junior classmate Redpath, and one by Carter off of a feed from the outside by Savannah Sweitzer.