At the outset, Blue Devils head coach Noelle Powell stated, "This is the week when we find out what we're made of." 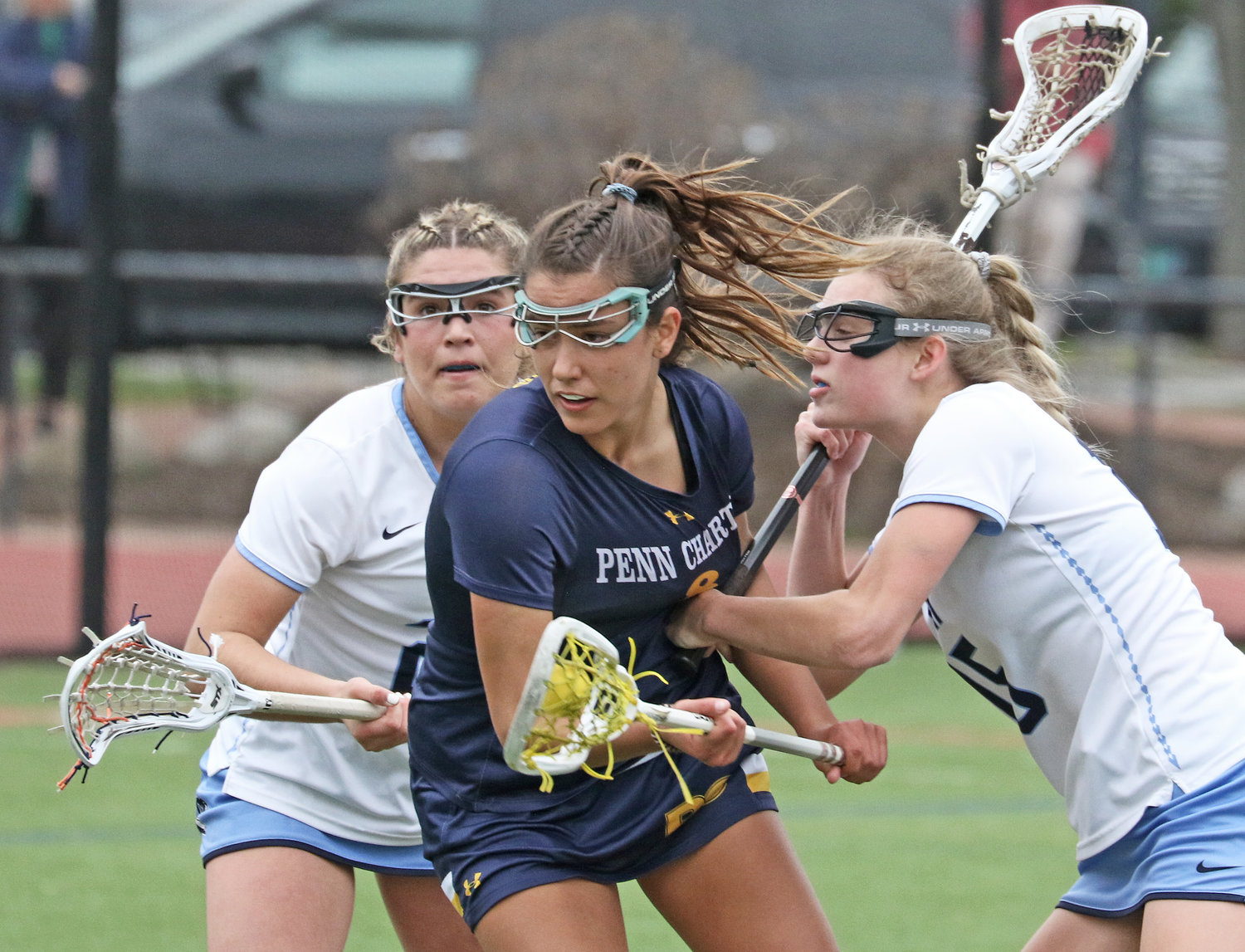 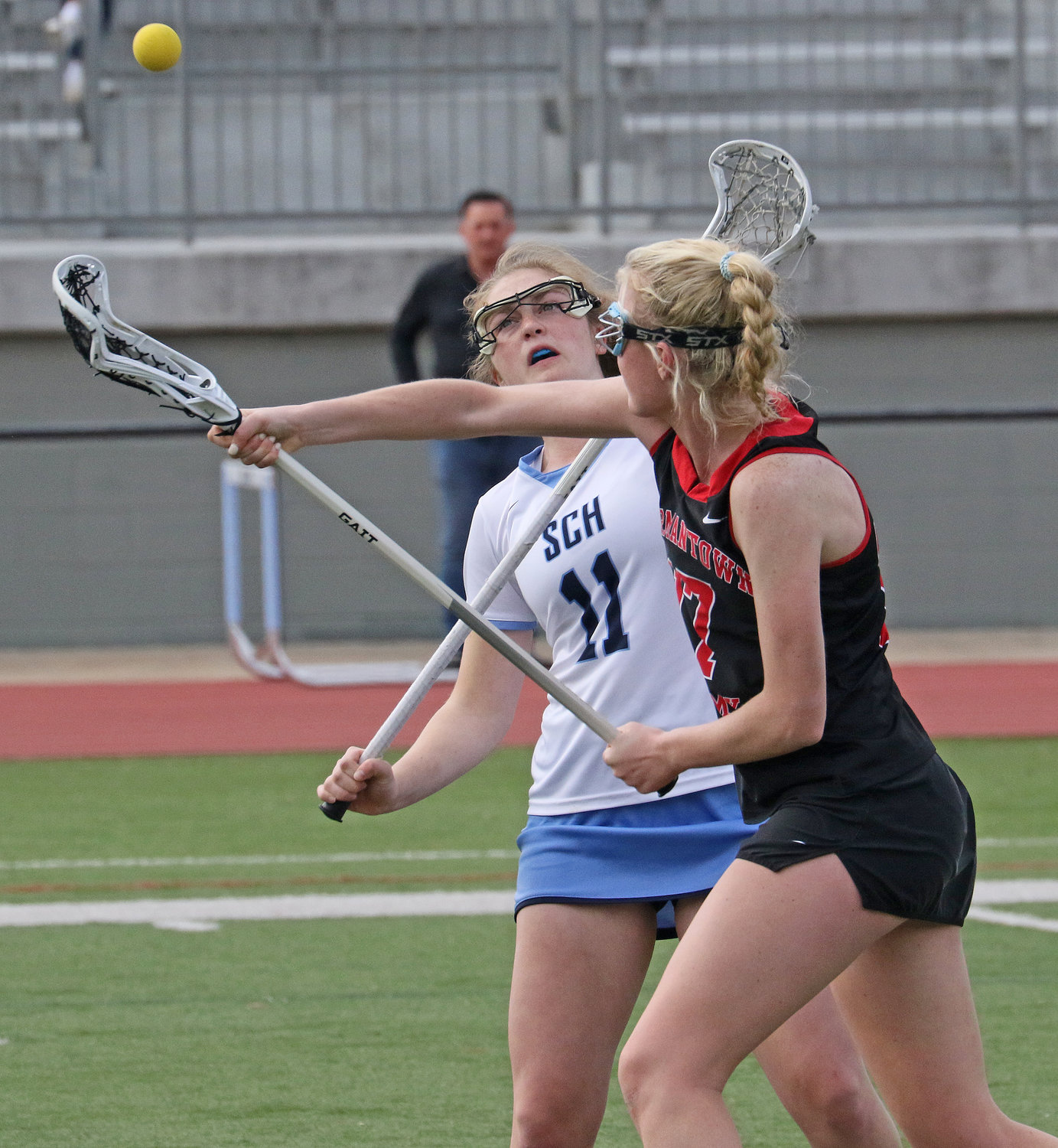 In the first full week of April, the girls of Springside Chestnut Hill Academy faced two Inter-Ac League lacrosse rivals from the area and one non-league opponent in a three-game homestand in Maguire Stadium.

At the outset, Blue Devils head coach Noelle Powell stated, "This is the week when we find out what we're made of."

SCH would pass all three phases of the test, defeating defending Inter-Ac champ Penn Charter on Tuesday, 12-9, downing Cardinal O'Hara the following day, 14-10, and then returning to league play on Friday with an 18-11 victory over Germantown Academy. The Devils ended the week with a record of 2-1 in the Inter-Ac and 6-1 overall, their lone loss coming against Agnes Irwin, 12-9, on March 22.

Penn Charter head coach Colleen Kelly runs the Big 4 Triple H club organization that Pearson plays for outside of school, so she is well aware of the SCH senior's talents.

"Lucy played unbelievable," she said after Tuesday's match. "They played great and they deserved to win. They put the ball in the back of the net and they won draw control. Honestly, you perform well in those two areas and you win the game."

Neither squad led by more than two goals until SCH separated by three points at the end of the affair.

After Penn Charter junior goalie Kayla Joyce saved a shot by SCH senior Cece Reilly in the opening minutes, the visiting Quakers went ahead on strikes by senior Darcy Felter and junior Gracie Shoup. Reilly put the Blue Devils on the scoreboard six-and-a-half minutes into the action, and might have tied the game on a free-position play if not for a timely stick check by Shoup.

With 15:49 left in the first half, Charter went up 3-1 on a marker by senior Lane Murray, a swimming recruit who will perform in the pool at Dartmouth College.

Three of the next four goals were scored by Springside's Bradbury, who demonstrated her versatility by finding the back of the next on an overhand shot, a shovel shot, and a bouncer. She scored twice, junior Bea Buckley got a goal for PC, then then Bradbury fired a third goal to tie the match at 4-4 with just under 10 minutes left in the half.

Markers by Buckley and Reilly created another tie, then the hosts' Sarah Scollin, a sophomore, cashed in off a free position to give the Devils their first lead, at 6-5.

Penn Charter, however, would enjoy a halftime advantage after finding the net twice in the last minute-and-a-half. Seniors Maddie Shoup and Murray were the scorers as the Quakers went into the intermission with a 7-6 edge.

For a second time, the Blue Devils' Scollin converted off of a free position to forge a 7-7 tie two minutes into the second half.

Maddie Shoup moved PC ahead again less than a minute later. On the next PC assault, SCH's Pearson stopped a hot by senior Charlotte Hodgson, but the Quakers kept possession and Hodgson (a senior headed for Harvard) scored on a second attempt.

This gave the visitors a 9-7 lead with 16:03 left to play, but the Quakers would not score again. After another three minutes, free position opportunities had allowed SCH to balance the board at 9-9. Sophomore Maddy Caliendo scored directly off of her free-po, and on another restart for Scollin, she passed to the front of the cage to Bradbury, who netted her fourth goal.

The goalkeepers held sway for the next five minutes or so. PC's Joyce saved a shot by SCH sophomore Alex Reilly (Cece's sister), and at the far end Pearson made stops on Charter's Felter and Shoup.

On an extended possession for the Devils, Joyce made saves for Penn Charter against Cece Reilly and Bradbury, but SCH scooped up both rebounds. Bradbury went to a sidearm shot to score the eventual game-winning goal (her team's 10th) with 6:52 remaining.

At 4:11, Alex Reilly dodged a defender at the top of the offensive set and drove in to fire a hard overhand shot, making it 11-9. When the Devils got the ball back, they ran it around in the offensive third to drain the clock. Eventually, sophomore Madison Freeman moved across the face of the goal from left to right and shot the final goal of the day for a 12-9 tally with 1:15 remaining.

PC's final attack began off of a free possession in the defensive end with 10 seconds left, but the Quakers didn't get off a shot before the horn.

In the second phase of Springside Chestnut Hill's three-game homestand, the Blue Devils hosted a Wednesday match with a Cardinal O'Hara team that has become a force within the Philadelphia Catholic League. SCH had a 6-2 lead at halftime and still led by four goals at the end, winning 14-10.

Pearson had a busy day in the cage, piling up 16 saves. Freeman finished with four goals, the Reilly sisters each shot two, and Scollin scored one.

Once again, Bradbury funneled in five goals to lead the SCH attack. One of several players on her team to take the center draw, she accumulated eight draw controls; she had won 10 in the Penn Charter game, and would add seven more against GA at week's end.

Coach Powell agreed with the proposition that Bradbury may be the best player that relatively few people talk about.

"She's probably the most underrated player in the Inter-Ac," she said. "She's a workhorse, and she's an absolute rock star on the draw - I think she's proven that. She's got a great stick, a great sense of the field and the game; her IQ is extremely high. She's definitely not undervalued by us - we adore her."

On Friday, Germantown Academy arrived in Chestnut Hill with an overall record of 5-2-1 and a league mark of 1-1. The Patriots found themselves trailing 0-2 after three-and-a-half minutes, as Alex Reilly first assisted on a goal by sister Cece and then scored one herself.

Six minutes in, GA junior Mia Raven netted the first of her game-high six goals, putting in a low shot off of a free position. After that, the Germantown attack wouldn't be heard from for awhile as the Blue Devils pumped in four consecutive goals over a five-minute span.

Scollin accounted for the first two, scoring with an assist from Alex Reilly and then again off of a free position. After Cece Reilly converted off of a feed from Freeman, GA called time-out, down 5-1 with 13:58 remaining in the first half.

When play resumed, Bradbury seized the draw for SCH and steamed straight up the field to deposit a shot just under the GA crossbar. That made it 6-1 at 13:44, but this time the Patriots responded just 15 seconds later as Raven dodged through the middle and fired from near the crease.

Riley Kling, a junior defender for the Blue Devils, came all the way upfield in transition to post a seventh goal for the hosts, but GA then put away back-to-back goals for a 7-4 tally 10 minutes before halftime. Sophomore Emma Goodwin shot the first one off of a free position on the right, targeting the lower left corner. On the Patriots' next possession SCH's Pearson fouled and was moved out of the cage for a GA restart. Patriots sophomore Lucia Smigiel sent the ball into the open net to get the visitors back within three points of the leaders.

Over the last five minutes of the half, markers by SCH's Bradbury and Alex Reilly were sandwiched around a successful drive by GA's Raven, setting the score at 9-5 for the intermission.

The Patriots needed to get to work trimming back the SCH lead as the second half began, but instead Springside Chestnut Hill netted two more goals in the opening minute thanks to Bradbury and CeCe Reilly. A little later, Bradbury was awarded a free position, and she whipped in a low sidearm shot to make it 12-5 with just over three-and-a-half minutes elapsed in the second half.

GA battled gamely, though, putting together a 3-0 run in which two goals by Raven were separated by one from Goodwin. Unfortunately for the Pats, the Blue Devils responded with an offensive spurt of their own, spreading the score to 16-8 in a two-minute flurry of shots. Freeman accounted for the first two (assisted on one of them by sophomore Cortney Neverosky), and the other two belonged to Bradbury and Alex Reilly.

GA called time-out at the end of this string, with 13:43 left to play. A little over a minute after the action resumed, Goodwin bounced in a shot for the Patriots, and resulting 16-9 tally stayed on the scoreboard until the clock dipped below two minutes.

Then, Raven scored her sixth goal of the day with an assist by sophomore Gigi Ippoldo. Cece Reilly deposited the last two of her five goals to round out the Blue Devils' total, and with 23 seconds remaining GA netted the final goal of the afternoon, courtesy of sophomore Kaitlin Pokorny.

Reilly's fifth goal for SCH had been assisted by senior Brooke Gyllenhaal, part of the Devils' stalwart defensive unit along with Kling, senior Ava Schreiber, and junior Caroline Foley.

"They all play their roles well, and hold the fort in the back so that the middies can do their work," Coach Powell said.

"We're a young team, and we just have to continue to believe in ourselves," he remarked. "It's always a challenge when you have a new coaching staff coming in, putting in a new system with new terminology and a different emphasis on aspects of the game.

"We came up against a really good SCH team today," he continued. "They're deep with talent and their draw control unit is impressive. Then when you do get the ball up on offense, you're going up against an All-American goalie in Lucy Pearson. We were able to score 11 goals, which is pretty good. There was no quit; we played hard the whole time. There are obviously things we need to keep working on, but I'm proud of them."