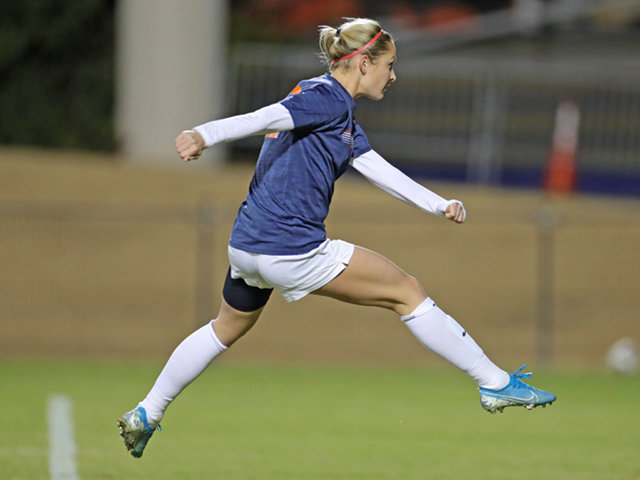 SCH alum Meghan McCool warms up before a 2019 NCAA tournament game at the University of Virginia. (Photo by Tom Utescher)

Meghan McCool's senior season at the University of Virginia drew to a close last fall in the NCAA tournament. That wouldn't be the end of the talented forward's soccer career, though.

Last week, the former Springside Chestnut Hill Academy star signed a contract to play professionally for the Washington Spirit of the National Women's Soccer League, the premier pro league in the United States.

"I'm super excited, and it's fun so far," she exclaimed. "I decided I wanted to stay kind of local, and this was the best opportunity for me. I had been training with them for a while, and when the quarantine lifted, they offered me a contract."

McCool will begin to enjoy real competition with the Spirit toward the end of June, when the NWSL launches a month-long series of games outside of Salt Lake City called the Utah Challenge Cup.

At the University of Virginia McCool played in 88 games, starting in half of those and serving as a team captain as a senior in 2019. She was named to the All-Atlantic Coast Conference First Team last fall, when she shared high-scorer honors in the conference with her UVA teammate, Diana Ordonez.

During her high school career, Springside Chestnut Hill had yet to develop into the Inter-Ac League power that it is today. McCool was double or triple-teamed by most opposing teams, but still scored 136 goals as a Blue Devil.

The highlight of her college career was her senior season. Virginia entered the NCAA tournament with a record of 16-1-3, its lone loss coming in overtime against North Carolina in the ACC tournament finals. A regional number one seed for the NCAA's, the Cavaliers began the tournament with a 3-0 victory over Radford (Va.), but then their season ended unexpectedly in the second round with a 3-2 to loss to the Cougars of Washington State University.

After that, McCool wasn't sharply focused on the continuation of her soccer career, but in March she was invited by the Spirit to attend their pre-season training camp in Florida. This occurred largely during her spring break at UVA, and due to the pandemic, the school year never resumed.

"I went back home," said the Glenside native, "and I was able to spend a lot of time with my family, which was super nice."

On the pro soccer front, she related, "It all began to happen pretty fast from the middle of May. I hadn't been sure what I wanted to do, and this opportunity just kind of came about and I went for it. For the time being, I'm living with a host family in an apartment in their house."

McCool's classmate and teammate at UVA, defender Phoebe McClernon out of the Academy of Notre Dame, was drafted by another NWSL franchise, the Orlando Pride. During their high school years, the two Inter-Ac League stars played club soccer together for Penn Fusion.

It had taken McCool a little while to adjust to the transition from high school to college soccer, but now she said she's finding that the professional game "is a whole new ball park. This is the biggest jump I have seen in levels."

At present, she explained, "I'm focusing on keeping up with the speed of play. It's so fast, and when you think you have a minute to think about what you're going to do with the ball, there's somebody on your back instantly, somebody making a tackle. I've always had the advantage of being very fit, but obviously everybody here is in fantastic shape, and they're strong."

The former SCH standout summed up, "It's definitely been an adjustment, but every day I play, I feel more comfortable and more confident."