SCH golf opens up with league series against Notre Dame

On SCH's home course at Sunnybrook Golf Club (par-36 for the front nine holes), a three-over round of 39 by a seventh-grader led the Irish of Notre Dame to a 246-274 victory over the host Blue Devils.

SCH golf opens up with league series against Notre Dame 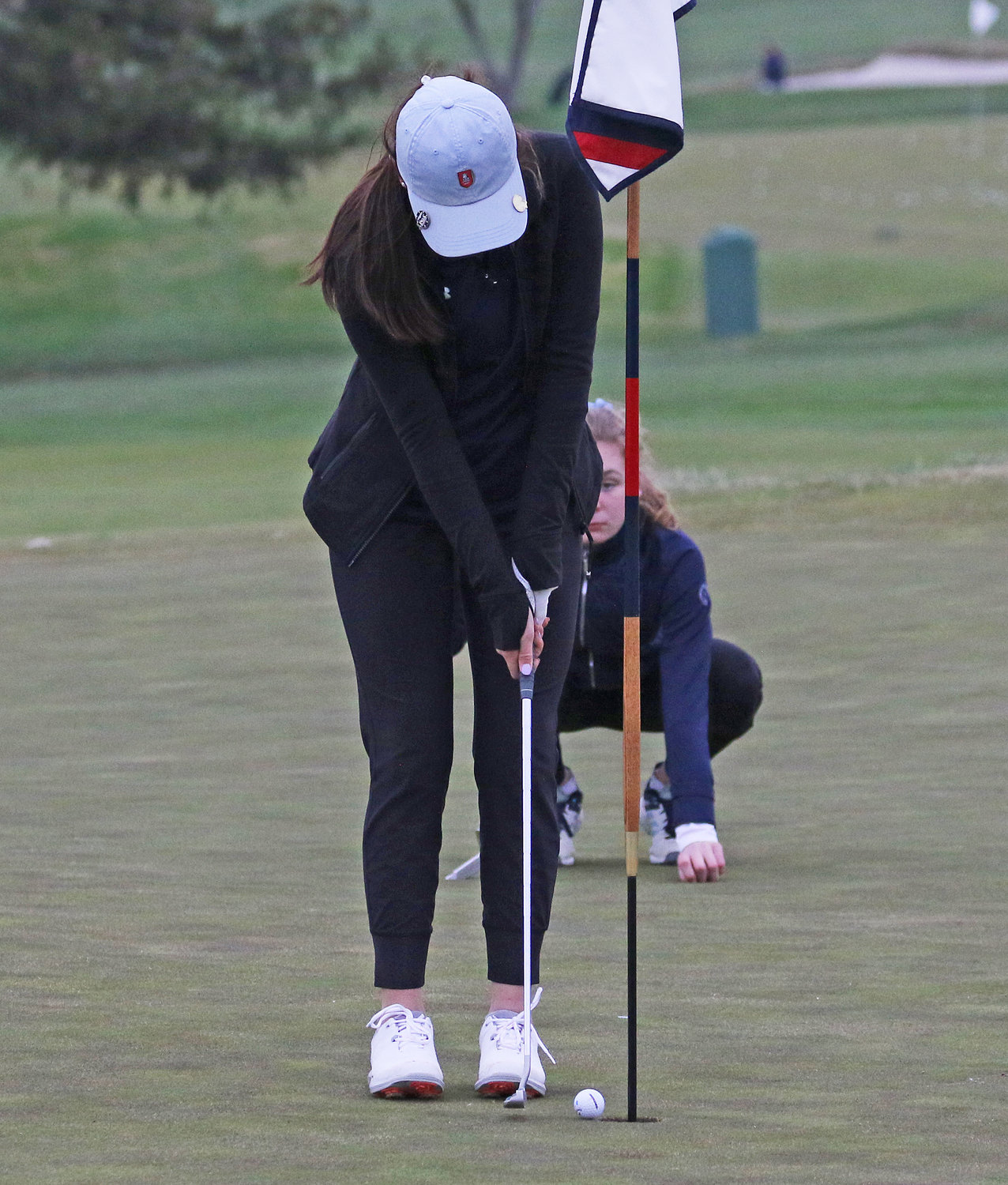 Evelyn Lauerman, an SCH junior, taps the ball in on the ninth hole. Photo by Tom Utescher 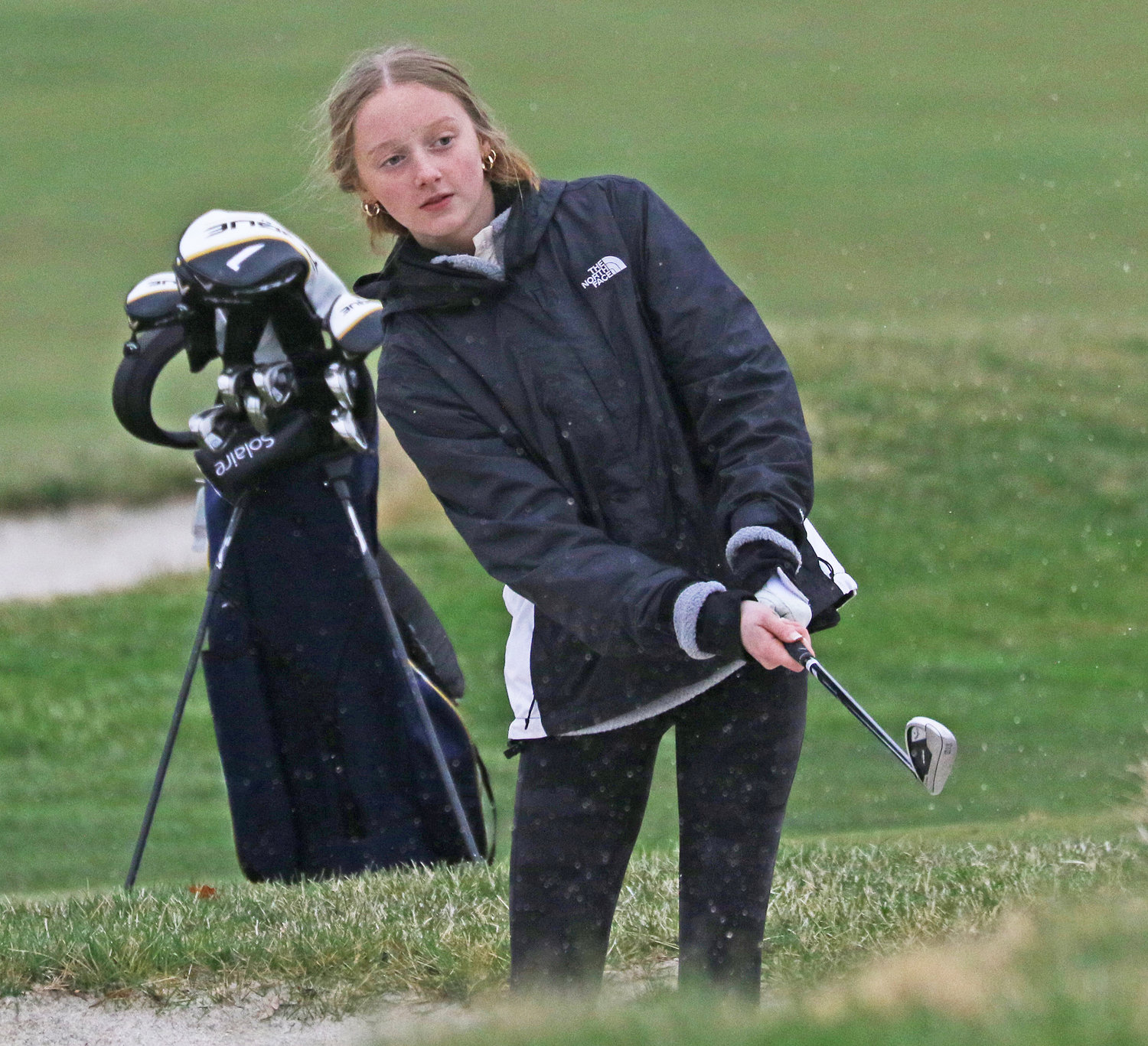 Steady rain had been forecast for last Wednesday just a day earlier, but Springside Chestnut Hill Academy and the Academy of Notre Dame waited to see what actually happened, and were able to go forward with the second match in their home/away Inter-Ac League series.

On SCH's home course at Sunnybrook Golf Club (par-36 for the front nine holes), a three-over round of 39 by a seventh-grader led the Irish of Notre Dame to a 246-274 victory over the host Blue Devils.

For the Devils, this was an improvement from Tuesday's match over on Notre Dame's home course (Overbrook Golf Club). SCH only had five players for that contest, and in the play-eight, count-five match format, they had to count a very high score (in strokes) which resulted in a 238-297 loss.

That was the first outing of the 2022 season for Springside. Notre Dame had gotten in one earlier match, soundly beating Baldwin School, another Inter-Ac League team.

On Wednesday, while nothing but an occasional fine drizzle came down from the clouds, the course at Sunnybrook was definitely soggy for the young golfers. SCH turned out seven players, still short of the full eight, so in the first group of golfers junior Isabella DeCesare was the lone representative of the home team.

DeCesare has been playing on the Blue Devils' varsity team since she was an eighth-grader, and her score of 44 would be the best for her school and the second-best of the afternoon. Playing with her, Notre Dame senior co-captains Onca Urban and Catherine Chapman turned in scores of 49 and 52, respectively.

Although Notre Dame's grade school and upper school share the same campus, in team sports there has always been a clear division between the two. The upper school teams compete in the Inter-Ac, but the grade school belongs to the Girls Catholic Academies League, along with schools like Norwood Fontbonne Academy and Gwynedd Mercy Elementary.

In golf, an exception was made for seventh-grader Kiersten Bodge this spring, and it's not hard to see why. She eclipsed all of her older competitors by producing the best round of the day, a 39. Along with her in the same foursome was her freshman colleague, Ciara Kelly, who carded a 55. The Blue Devils in this quartet were junior Evelyn Lauerman, who finished with a score of 47, and sophomore Ava DeCesare (Isabella's sister), with a 53.

Out of the next foursome, only one individual score went towards the team totals, a 61 fashioned by Tess Fairle, an SCH senior. Out of the final foursome, each team counted one individual score and discarded the other. A 69 from freshman Hope Kelly rounded out the Blue Devils' team score, while a 51 from junior Claire Gerardi locked in the final total for Notre Dame.