Springside Chestnut Hill Academy and Germantown Friends School were back at it last Tuesday,November 30,  when the SCH Blue Devils hosted the Tigers in the dual-meet season opener for both schools. 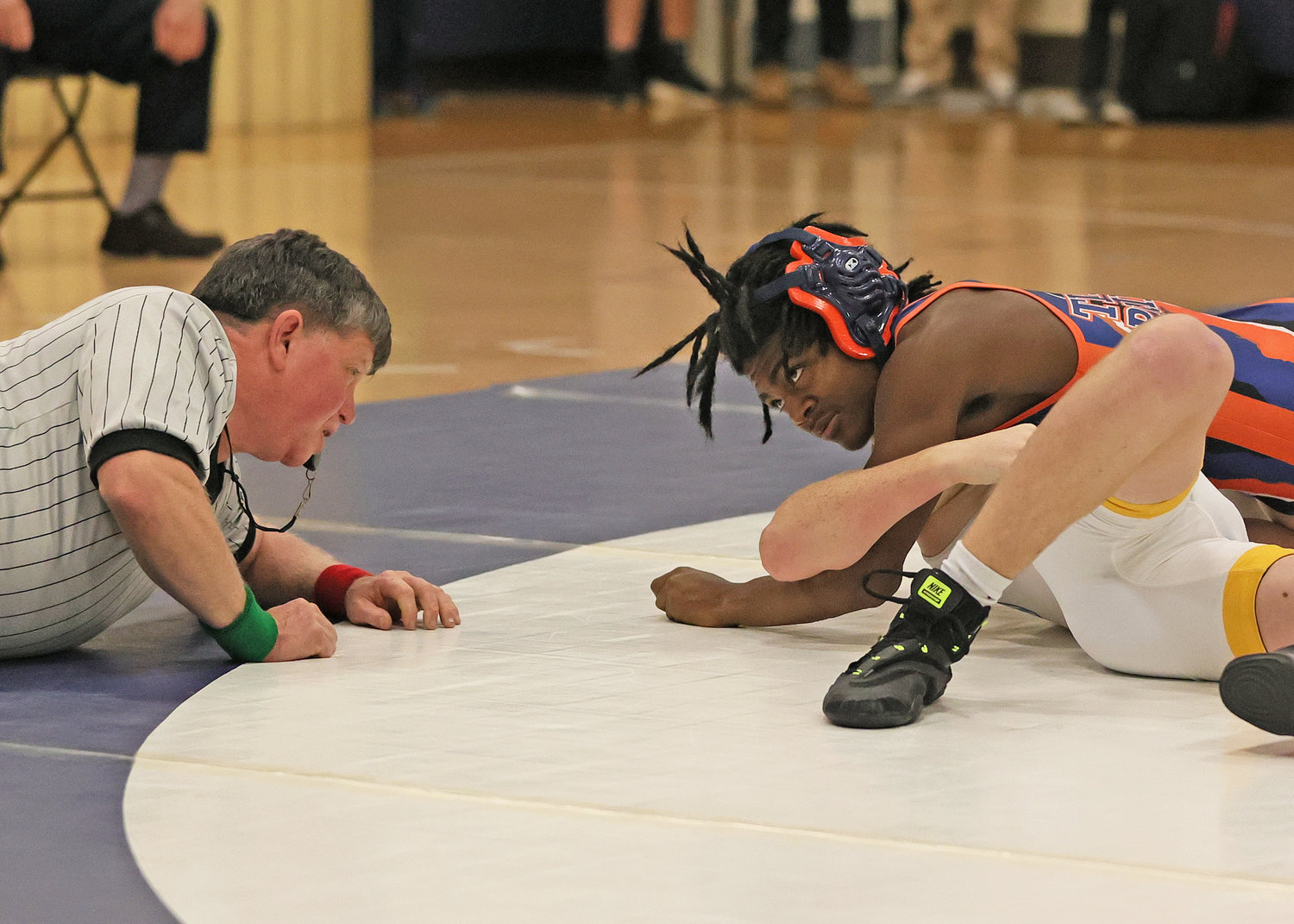 Germantown Friends senior Will Jiggetts looks to the official to signal a pin in the 145 lb. match.
Tom Utescher 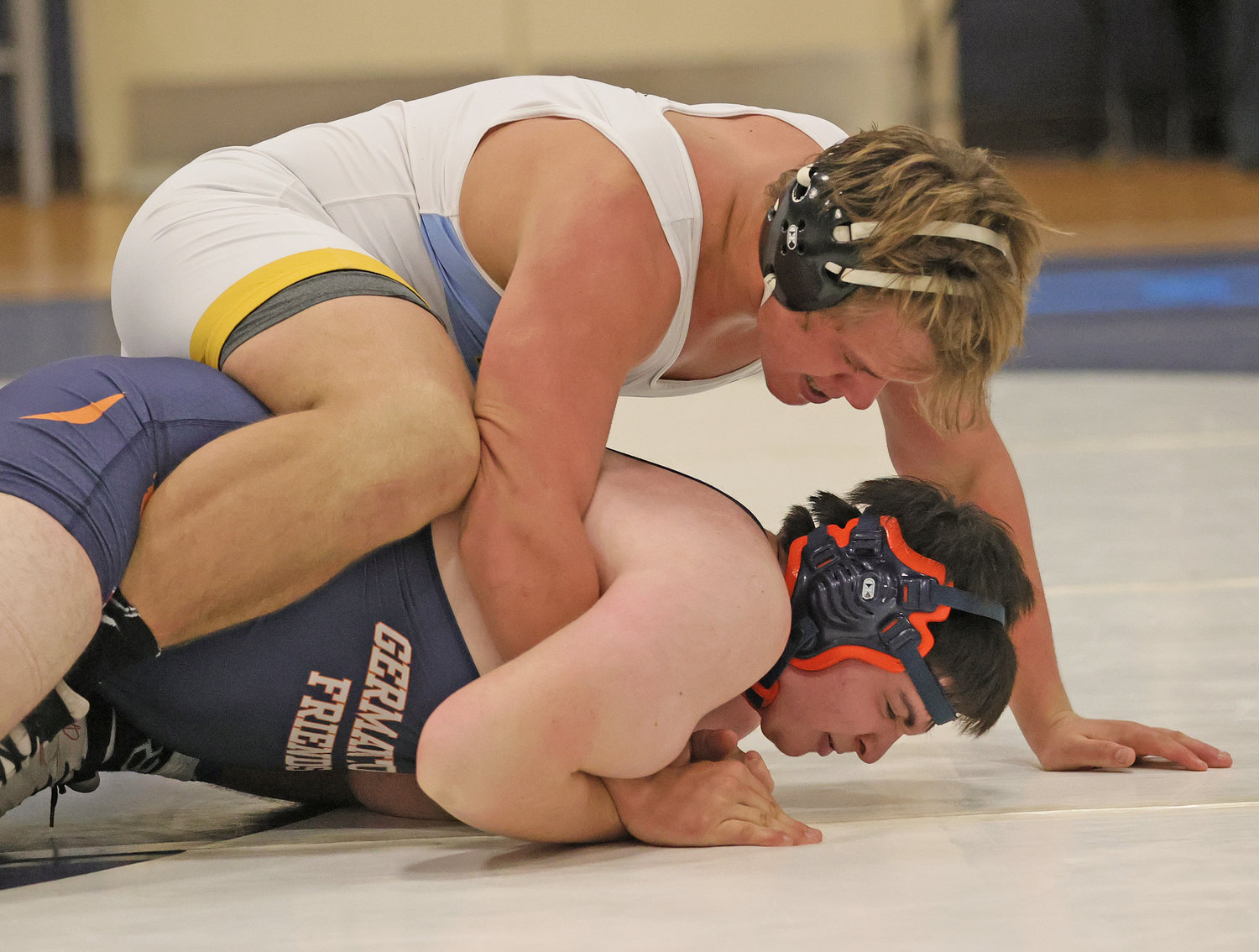 Most winter sports teams were able to play at least a limited game schedule last winter, but no form of social distancing was possible in wrestling competition. Just now, grapplers are getting back on the mat to officially compete for the first time since the 2019-2020 academic year.

Springside Chestnut Hill Academy and Germantown Friends School were back at it last Tuesday,November 30,  when the SCH Blue Devils hosted the Tigers in the dual-meet season opener for both schools.

Neither team had a full line-up in the 14 weight classes, and this turned out to be a very competitive contest. The teams were tied 30-30 when in the final match, the 285 lb. bout, senior Mac Levin secured a pin to boost the Blue Devils to a 36-30 victory.

Springside Chestnut Hill picked up one other pin during the afternoon, collecting the rest of its team points through four GFS forfeits. Germantown Friends won four matches through pins, and one more through an injury default.

There were double forfeits in three other weight classes, and two of them began the day's proceedings in the 106 and 113 lb. flights. SCH then took a 12-0 lead in the meet score as forfeits by the Tigers were accepted by Blue Devils senior Jack Sanderson at 120 lbs., and by sophomore Andrew Mahony at 126. After that, there was a mutual forfeit in the 132 lb. class.

The first actual action on the mat, in the 138 lb. category, featured SCH's Jorge Bonvicini and fellow sophomore Levi Rudick of the Tigers. Rudick quickly scored a takedown and remained in control until pinning his rival with 37.3 seconds left in the opening period.

Another first-period pin followed for GFS at 145 lbs. Here, Blue Devils freshman Finn Whittle was pinned with 16.2 seconds left by Will Jiggetts, just one of two seniors on the Tigers' roster (along with Dante Billups).

Facing Germantown Friends freshman Garnet Ramsey, SCH sophomore Thomas Strain injured a knee early in the 152 lb. match and was unable to continue. His withdrawal resulted in an 18-12 lead for the visitors in the team score.

The Tigers' advantage continued to grow through several more matches. At 160, SCH freshman Nasir Yard scored an early takedown, but by the end of the first round, Tigers 10th-grader Simon Labor had engineered a 5-3 lead in points. Late in the second period, Yard was once more in the controlling position, but Labor scored a reverse and then a pin with 25.1 ticks to go.

Billups, one of the visitors' most experienced grapplers, built up an 11-2 lead in his first period against a junior for the host team, Micah Ford. Starting on the bottom for the second round, Billups reversed and pinned Ford with 1:29 still to go in the period.

The visitors' fortunes began to change when they had to forfeit to SCH senior R.J. Moore in the 182 lb. class. Next up at 195, Blue Devils senior Ben Rodgers pinned GFS sophomore Dean DeSeve 34 seconds into the match, bringing the home team closer to the Tigers in the team score, 24-30. A Germantown forfeit at 225 lbs. to senior Joe Cassidy of Springside Chestnut Hill tied it up at 30-all.

In the deciding match at 285 lbs., the action quickly went to the mat with a takedown by a senior veteran for the Devils, Mac Levin. GFS sophomore Leo Katowitz stayed on his stomach for awhile, but eventually Levin turned him and got the pin with 29.6 seconds left in the opening period.

Outside of the circle, Ed Dingley returns for his seventh season as head coach of the Blue Devils, and back as his assistant is former Chestnut Hill Academy wrestler Joe Aversa ('07).

GFS also has a former wrestling alum, Jared Lazorko ('16) back to help out sixth-year head coach Paul Hammond. Anthony and Idris White have come on board the coaching staff, as well. Both brothers are products of the Philadelphia Catholic League who wrestled in college, Anthony at Millersville University and Idris at the University of Maryland.