Springside Chestnut Hill Academy's field hockey players had an extension tacked onto the end of their 2021 season, courtesy of the PA Independent Schools Athletic Association. PAIS introduced a Commonwealth Cup Division tourney this year for teams with more modest records. 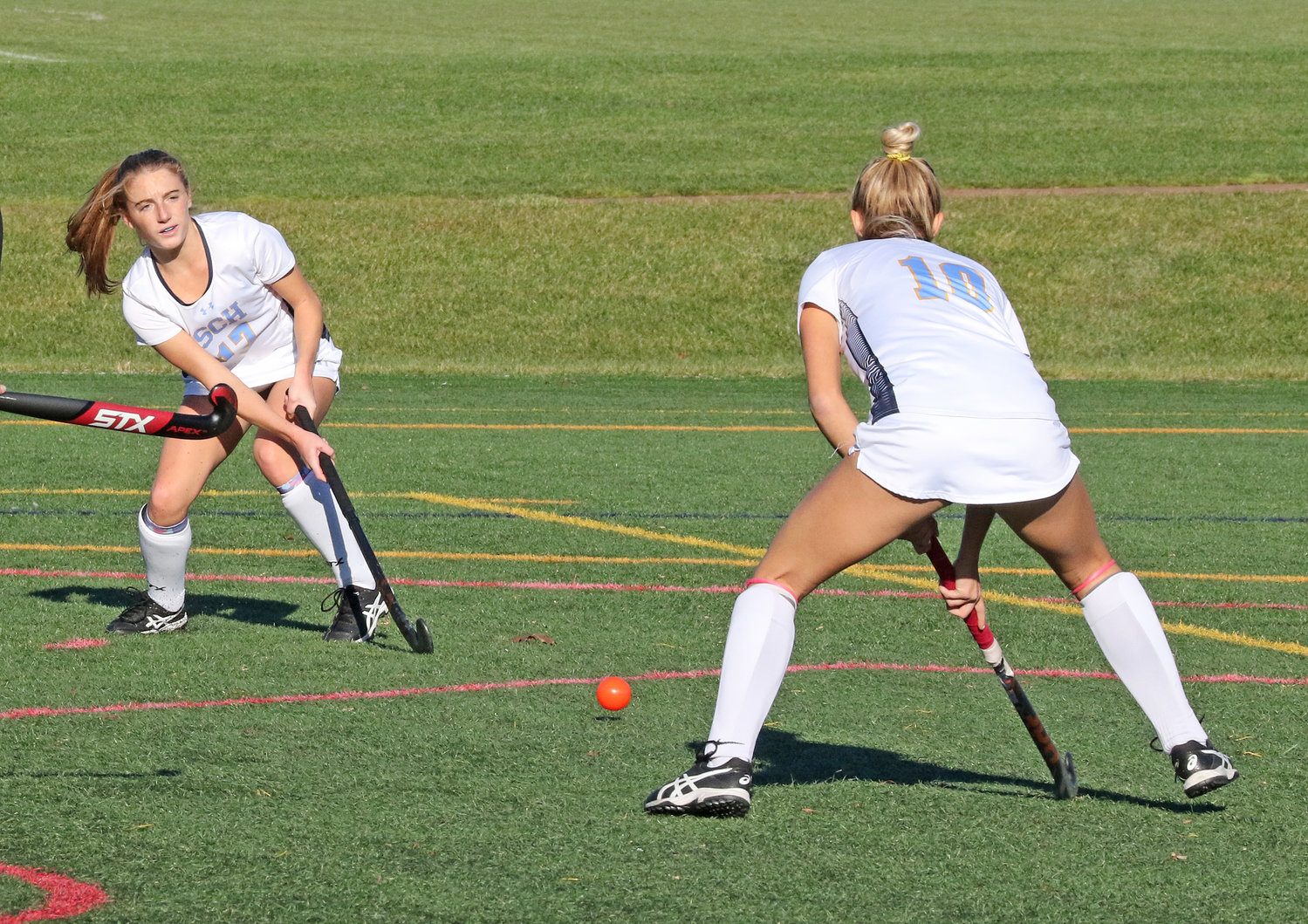 From the right side of the circle, Hannah Pierce (left) centers the ball to fellow senior Bella Tulio, who would drive it home for the Blue Devils' second goal.
Tom Utescher 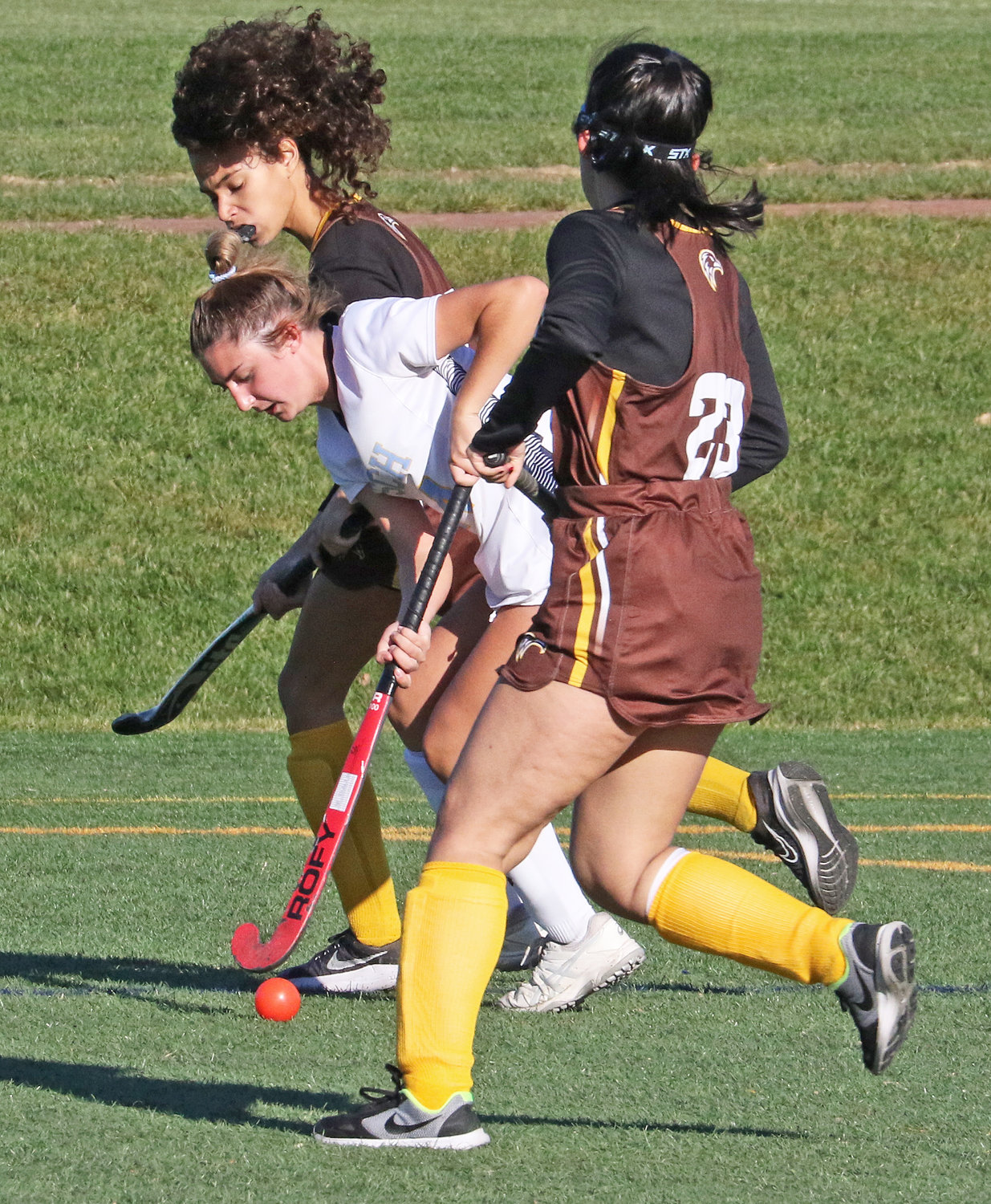 Springside Chestnut Hill Academy's field hockey players had an extension tacked onto the end of their 2021 season, courtesy of the PA Independent Schools Athletic Association.

While high-caliber hockey squads were seeded into the regular PAIS tournament, the organization introduced a Commonwealth Cup Division tourney this year for teams with more modest records.

The four-team tournament got underway last Friday, with Springside's Blue Devils winning a semifinal game at home over Friends Select School, 7-0. In the other semi, Penn Charter took a 1-0 decision from Friends Schools League champion Shipley School thanks to a goal by senior Amanda Ehrenhalt.

During the regular season, SCH had won a non-league bout over Shipley, 4-1, and in the home/away Inter-Ac series with PC the Blue Devils won 2-0 at home and then tied the Quakers, 0-0, in the rematch.

The hosts had the visiting Falcons on their heels as soon as the match began, and Pierce had soon put away the eventual game-winning goal with an assist from sophomore Maddie Caliendo. The senior then assisted a strike by her classmate, Tulio. As the final minute of the first quarter approached, a shot by Conlan came back off of FS goalie Lila Milliken, and Pierce was there to put the ball away, giving the Devils a 3-0 lead.

The home team caged one more shot during the second period to enjoy a 4-0 cushion at the half. This one came in the aftermath of a penalty corner, with Conlan driving the ball in from about eight yards out on the left side of the circle.

Junior Kaitlyn Melinson stood out as a playmaker in the third period, assisting on goals by Pierce and Conlan to help the home team ride a 6-0 lead into the fourth quarter. The Falcons generated some offensive activity of their own in the third round. They earned two corners and got off a shot each time, the first one straying wide to the left, and the second meeting the pads of Colleen Conlan.

Devyn Conlan completed her hat trick with just under four-and-a-half minutes remaining in the game, getting an assist from junior Caroline Foley. Foley is an SCH team captain this fall, along with Pierce and Tulio. After a very busy afternoon in the Friends Select goal cage, the Falcons' Milliken came away with 22 saves.

Emilee Ehret, now in her third season as SCH head coach, remarked "We kept the ball in our attacking end, and the seven goals today was the most we've had since I've been here. Our corners have gotten a lot better, and our attacking unit has really stepped up. We were able to get a lot of our younger players into the game today, and they did well."

Throughout the season, Ehret related, "Our whole relationship on the team kept getting better. When you hear the girls on the field, they're super positive with each other. They support each other, and that's how you build success."