If you didn't glance at the scoreboard and simply watched the ebb and flow of action in last Saturday's soccer game at Springside Chestnut Hill Academy, you might have been a little surprised at the 3-0 final score. 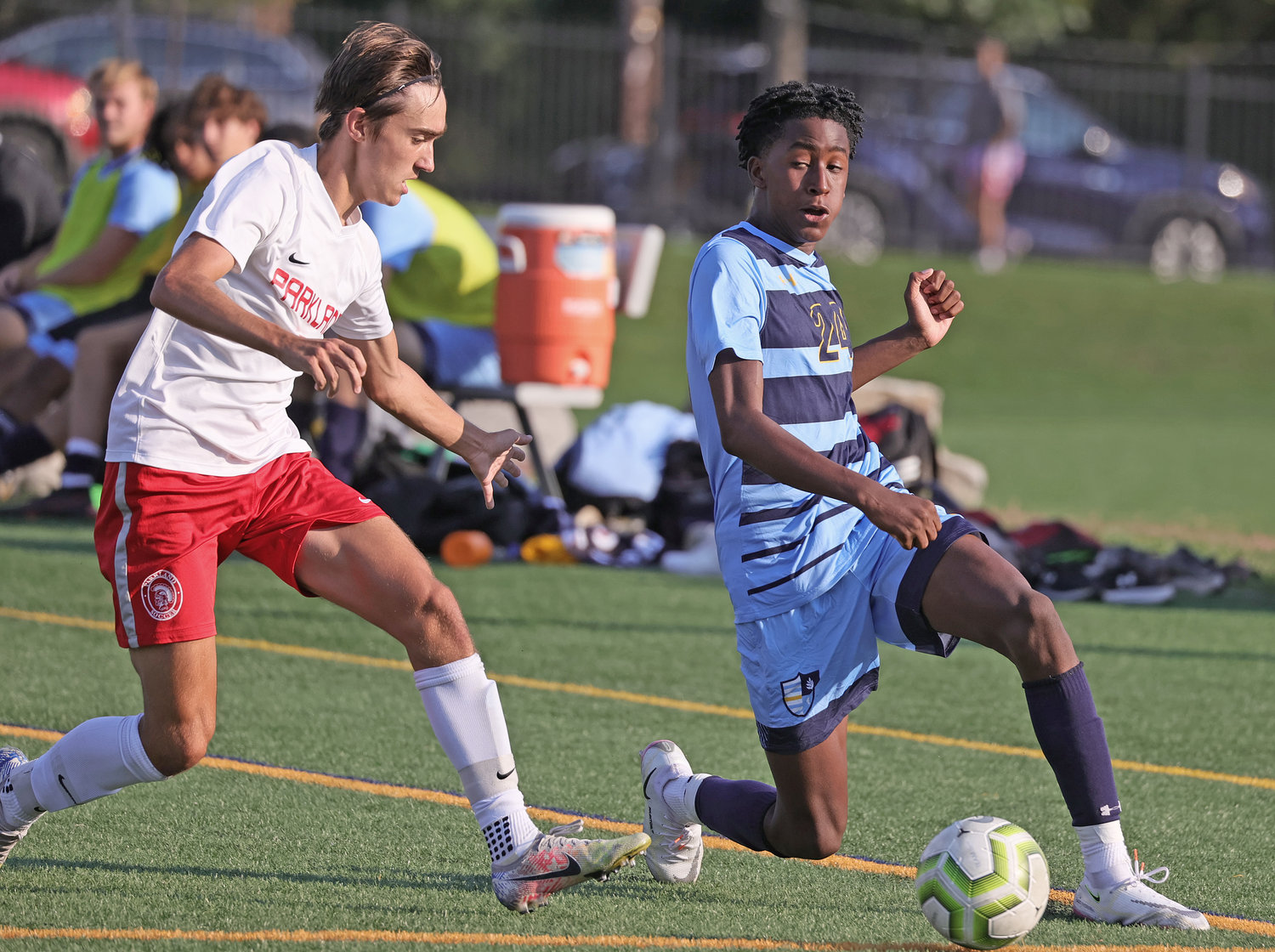 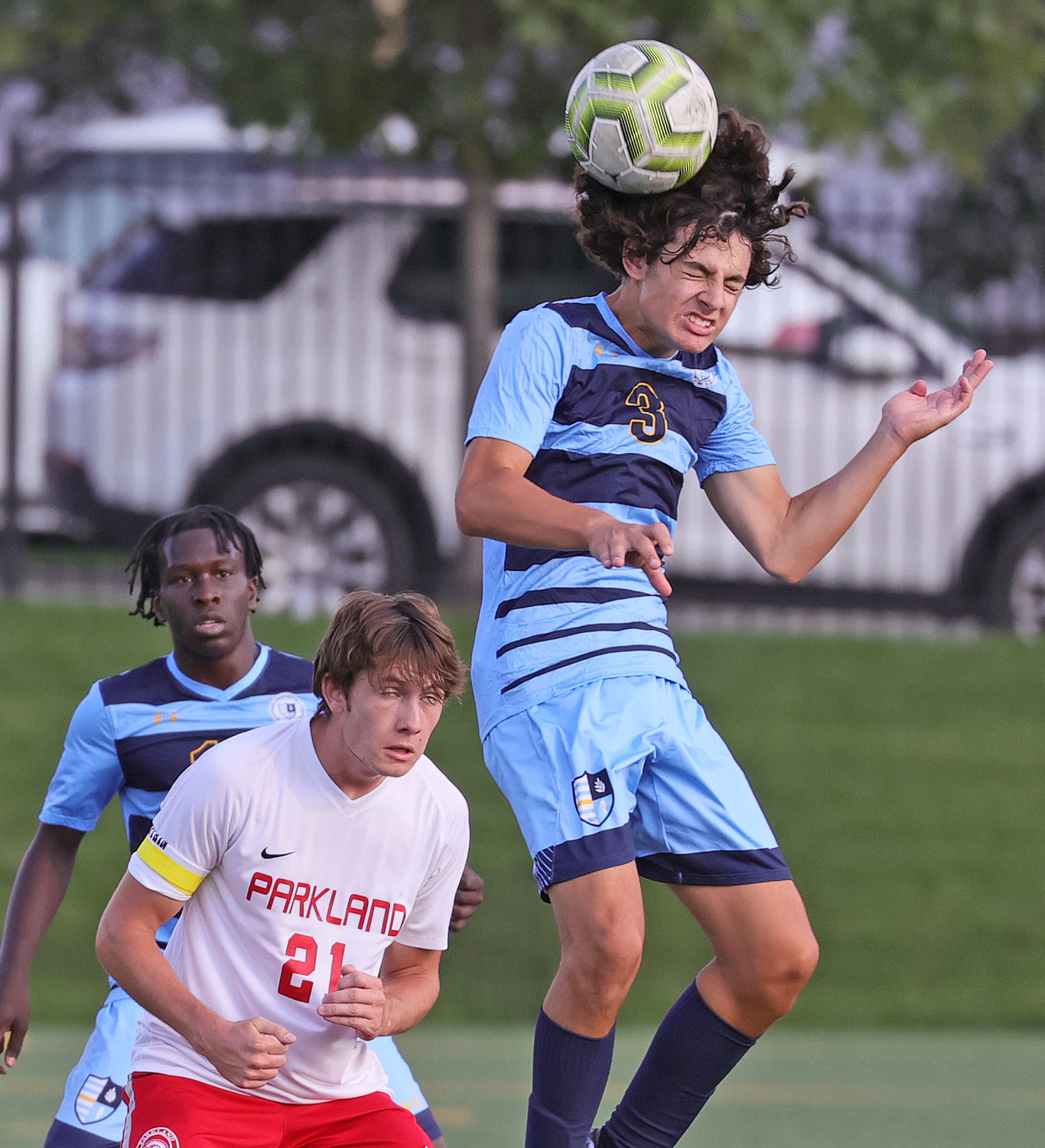 If you didn't glance at the scoreboard and simply watched the ebb and flow of action in last Saturday's soccer game at Springside Chestnut Hill Academy, you might have been a little surprised at the 3-0 final score. That was the official outcome, though, as the lads of visiting Parkland High School capitalized on three first-half scoring opportunities and the host Blue Devils were unable to ruffle the net at the other end of the pitch.

SCH slipped back to the .500 mark, having overcome Germantown Friends School back in the season opener on September 3. Parkland (from just north of Allentown, PA) moved into winning territory at 2-1. The Trojans play in the large-enrollment public school category in the PIAA, and have made many state tournament appearances. Their head coach, Patrick Birns, coached at Delaware Valley High School in Milford, PA, when SCH's Zalasky played there.

The Springside Chestnut Hill program graduated eight players from the 2020 squad, several of whom had been on two championship teams in both Inter-Ac League and PA Independent Schools competition. A few hours before game time last Saturday, it was learned that two experienced players on the current squad would miss the game as they began COVID quarantine.

Zalasky admitted, "That put us in a weird headspace before the game, and we had to rejigger things at center back and center mid. We were jittery early in the game."

The Blue Devils started Ben Rodgers in goal, with fellow senior Moje Badejoko in front of him on defense and their classmate Sean Stackhouse in the midfield. Jameson Callas, Danny Heep, Christopher Metsikas, Ryan White and Colin Woehlcke were the junior starters, and the sophomores who began the game are Zayd DeVeaux, Abdoul Diallo, and Joseph Nelson.

Nelson has arrived from the U.K. as a new SCH student this fall. Back in 2019, the Blue Devils' Stackhouse went abroad to play for a club soccer academy at Fleetwood in Lancashire, England.

Prior to the start of Saturday's game, the playing of the National Anthem was followed by a minute of silence to honor the victims of the 9/11 attacks, including 1994 Springside School graduate Johanna Sigmund.

Springside Chestnut Hill found itself trailing a little less than three minutes into the match, as Parkland's Will Wagstaff drove the ball in from 11 meters out a little left of center in the box. The Blue Devils made their first trip across the Parkland 18 about nine minutes in.

Later on, SCH's Metsikas fired a hard shot from the middle of the box that was deflected wide to the right of the cage by Parkland goalie Matt Link (eight saves). The ball could not have followed the trajectory it did if Link had not touched it, but the officials stupefied onlookers by calling a goal kick instead of a corner.

The transition sequence for Parkland that followed led directly to the visitors' second goal, scored from close range on the left by Zack Reighter with 22:10 remaining in the first half.

When Reighter scored again with 10:39 to go, the game's final score of 3-0 was up on the board. The Blue Devils generated a number of attacks in the last 10 minutes of the half. On one of them, a hard-hit shot from the right by Heep angled a little outside of Parkland's far post. He was active along the right wing all day.

The Devils had another scoring chance early in the second half, when they were awarded a kick a little above the 18 on the left. The shot by the Devils' Woehlcke smacked off the face of a defender in the Trojans' wall, and the net result was a do-over. Heep took the shot this time, and after the ball skirted the right side of the wall it was scooped up by Parkland's keeper, Link.

For the start of the second half, the host team had eighth-grader Cole Carberry in goal, a young talent who had arrived at SCH a year earlier.

Zalasky described his performance as "impressive for a guy his age. You have to respect his attitude and his ability to handle a high-pressure situation in his first varsity game."

After a good deal of possession time by the Blue Devils through a lot of the second half, Parkland made a push down the stretch to try and add to its three first-half goals. Carberry made both standing and diving saves back-to-back on one sequence with about eight minutes remaining, and later on he leapt up to deny the Trojans on a strong outside shot.

Zalasky commented, "In the second half we had some great glimpses of our guys keeping possession and getting into their attacking third."

The Blue Devils' boss will be assisted once again by assistant coach Tom Stackhouse (Sean's oldest brother), who is now starting his ninth season with the SCH varsity. A new member of the staff, Mike Bray, is not new at all to Zalasky; they grew up playing youth soccer and high school soccer together. Bray played college ball at Roger Williams University in Rhode Island. When he moved to the Philadelphia area recently, Zalasky was quick to reach out and bring him o