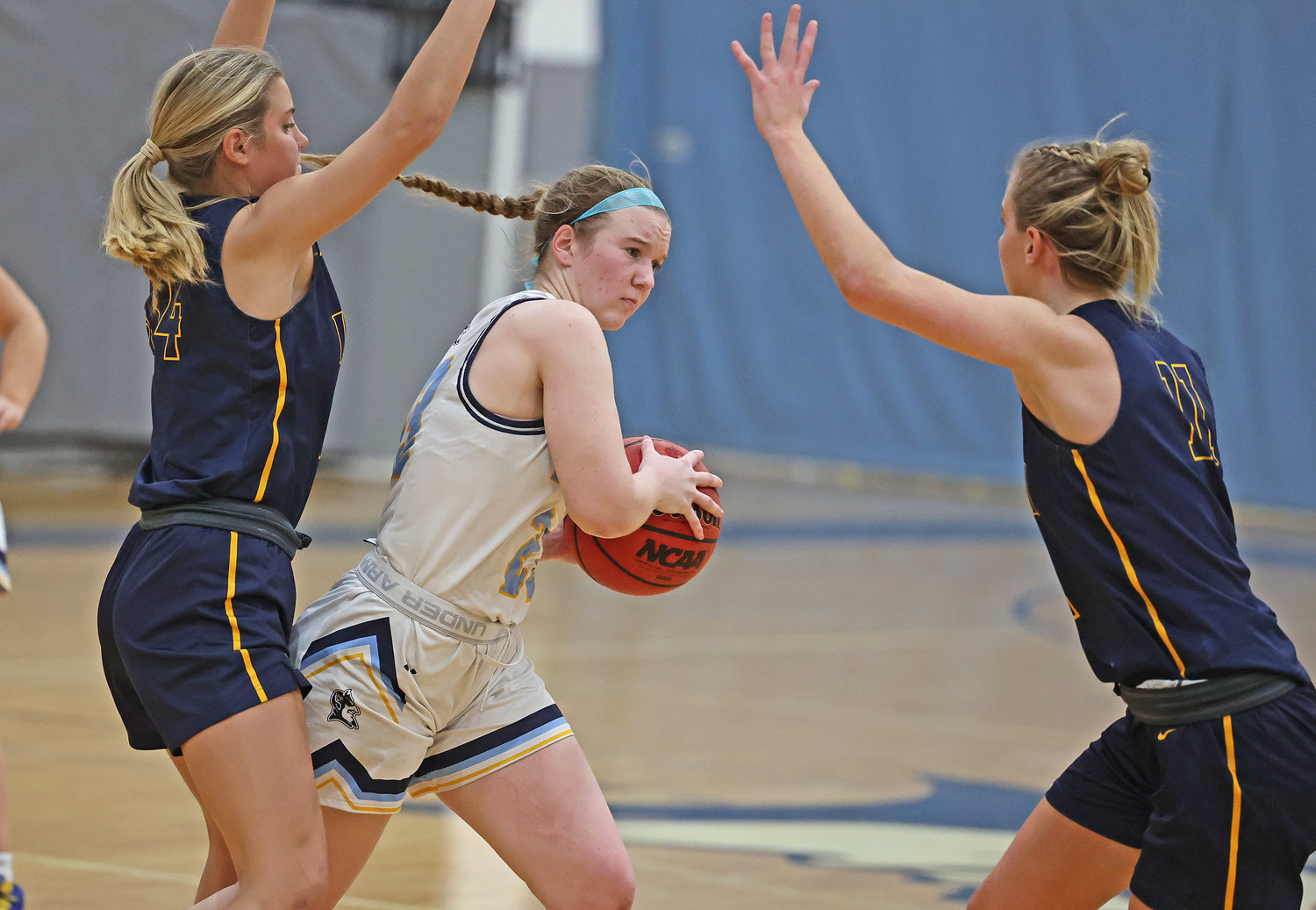 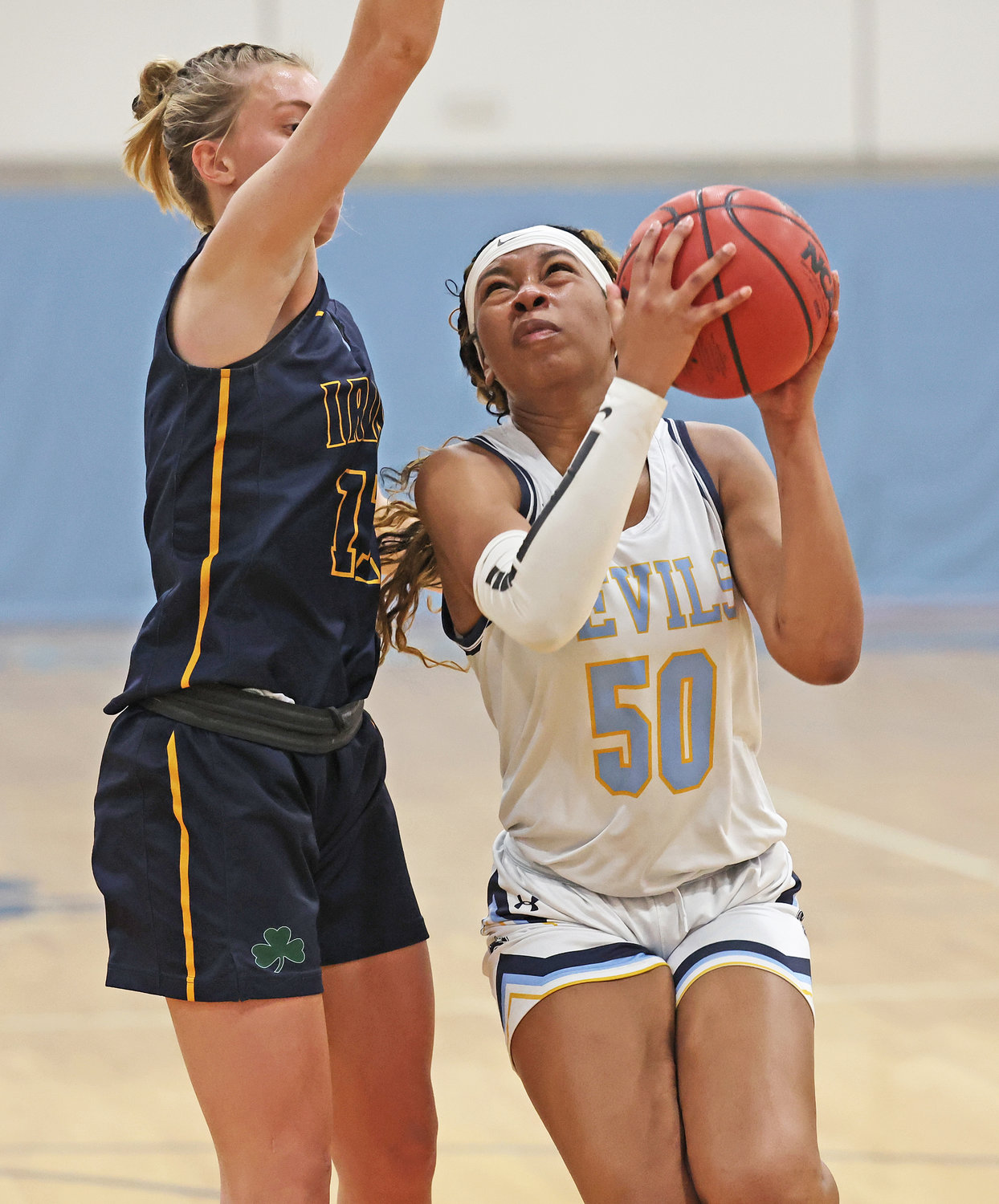 Zahkiyyah Frazier (with ball), an SCH junior, goes up for a shot against Notre Dame's Lizzie Halligan.
Photo by Tom Utescher
Previous Next
Posted Thursday, January 19, 2023 12:00 am
by Tom Utescher

The situation deteriorated after that, as the Blue Devils scored only one more point in the first half while Notre Dame ended the first quarter with a 13-6 edge and went on to a 29-7 halftime lead.

The Blue Devils' closest loss in league play was a 50-45 setback against Agnes Irwin School. The last contest for the Devils in the first round of Inter-Ac games pits them against the mightily struggling Baldwin School on January 17.

Immediately after that comes the rematch with Agnes Irwin, a team to whom SCH lost while still getting organized under new head coach Bartley Jeannoute. A 2-0 showing next week would improve the Blue Devils' fortunes considerably.

"It's tough for us rotation-wise," Coach Jeannoute said after the Notre Dame game last Friday. "There are a lot of players still finding their shot, finding their rhythm. In this game, in particular, we had some early fouls that forced us to shift line-ups often."

Notre Dame had its two tallest players sidelined for medical reasons, but SCH could not take advantage of this after two of its own strongest post players each picked up two fouls in short order. A third starter also had two fouls by the time the first half ended.

Lay-ups by freshman Zoe Thompson, junior Zahkiyyah Frazier and senior Fallon George kept the Blue Devils in contention until the aforementioned 10-6 score in Notre Dame's favor, then Irish senior Annie Greek made one of two free throws and also drove the lane to score for a 13-6 tally at the quarter.

When SCH's bigs began to get into foul trouble, the visitors scored off of offensive rebounds and also in transition. A lone free throw by Thompson provided the only point for the hosts during the second quarter, and the Blue Devils trailed by 22 points at the intermission.

Notre Dame freshman Chloe Knox opened the scoring in the second half, then SCH picked up five consecutive points on a jump hot by senior Tatyana Hall, a free throw by Frazier, and a driving lay-up by Thompson.

That made it 31-12 midway through the third quarter, but the Blue Devils would only add six more points during the last 12 minutes of the game.

Jeannoute, the SCH coach, said his squad is working on "Pushing the tempo, picking up the pace, and getting all five players comfortable handling the ball at least a little bit to get us up the court. We need to be able to handle ball pressure, because we don't have that much height and other teams will be looking to trap us."

Thompson, the freshman starter, can handle the ball on the open floor, and at 5'10", she can also be an asset down in the paint.

"She's got a great motor and a good head on her shoulders," Jeannoute said.