At first glance, it didn't appear that the Quakers were meeting a particularly daunting league foe. It turned out to be a different game than many people had envisioned. 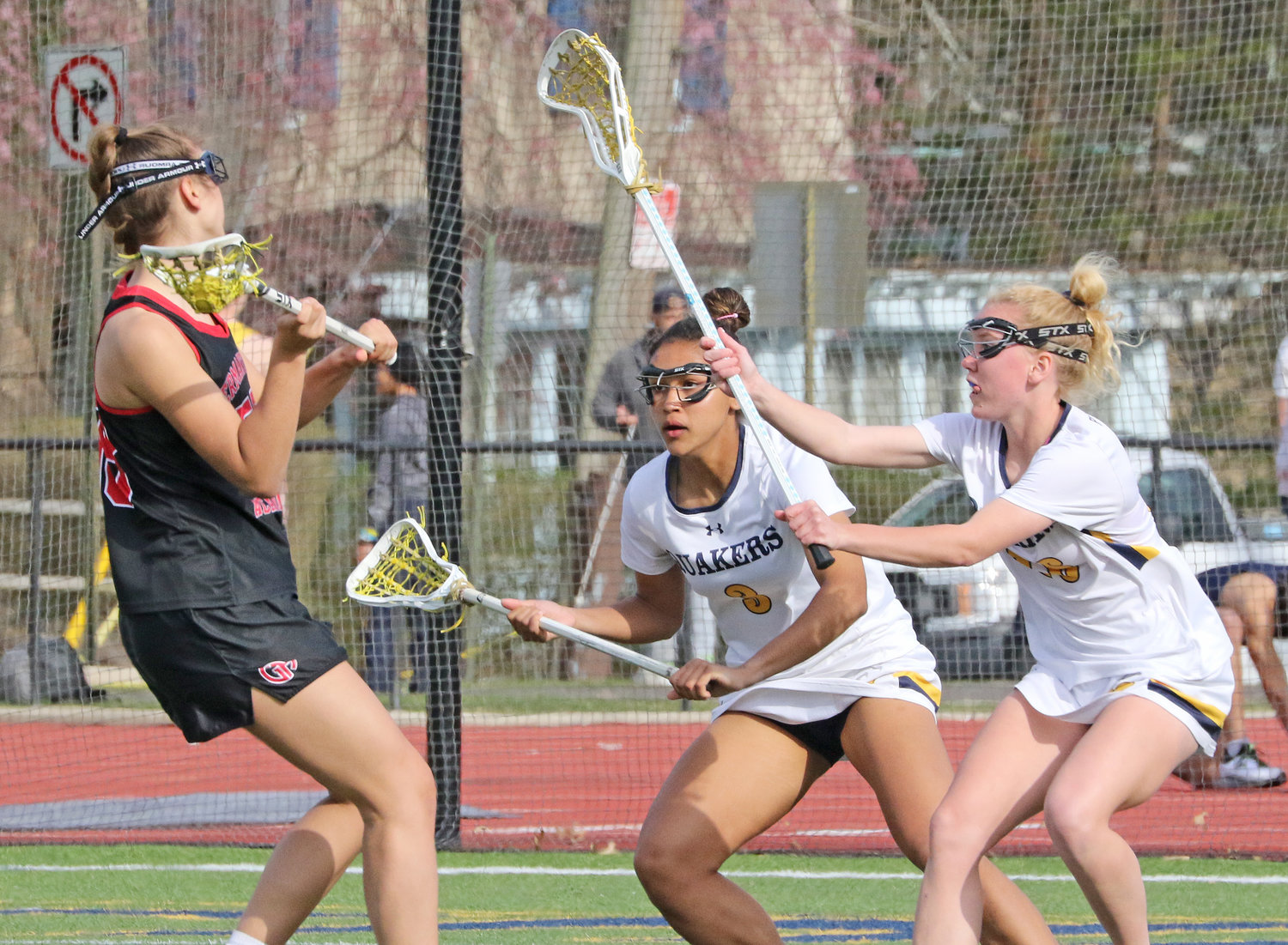 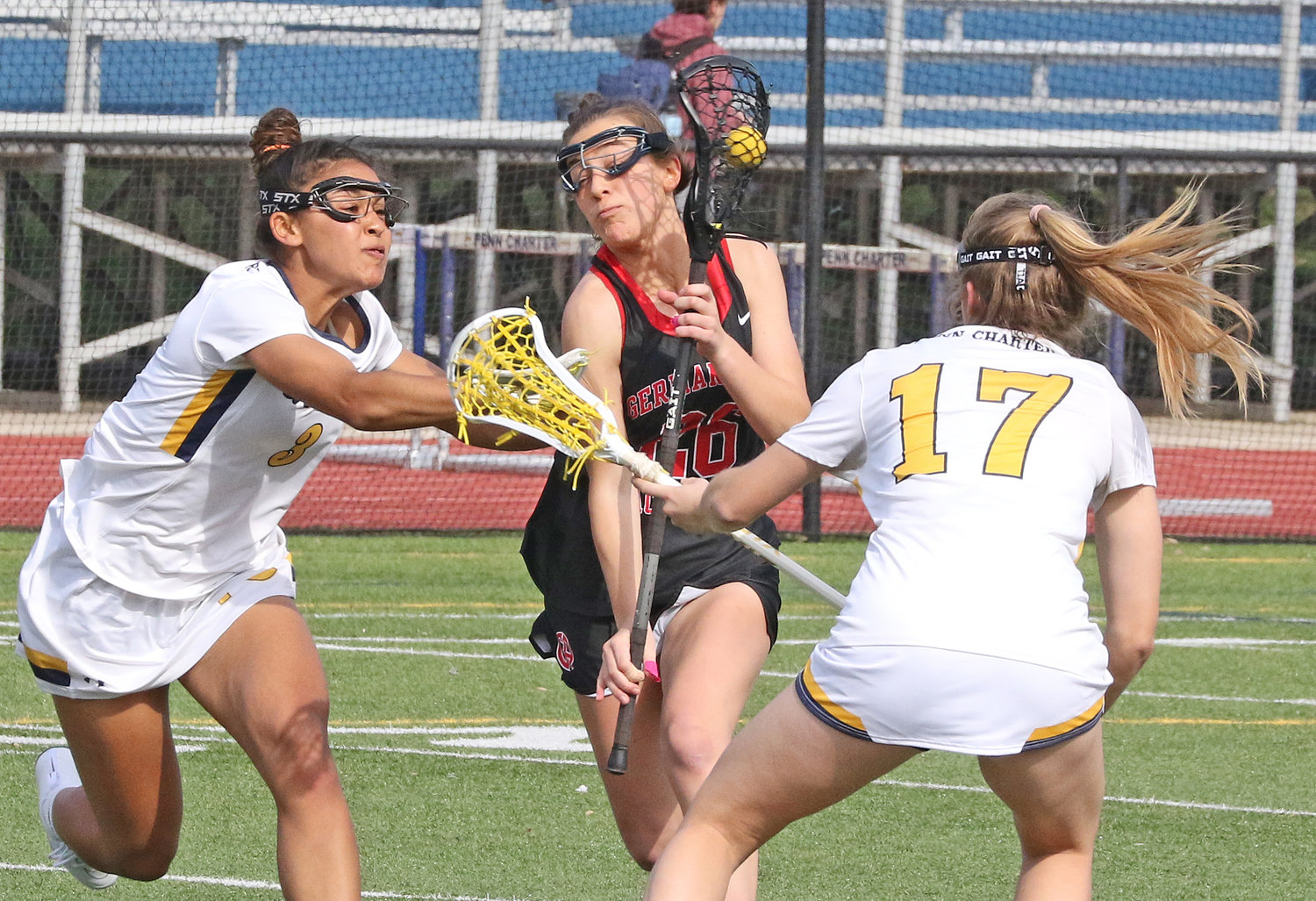 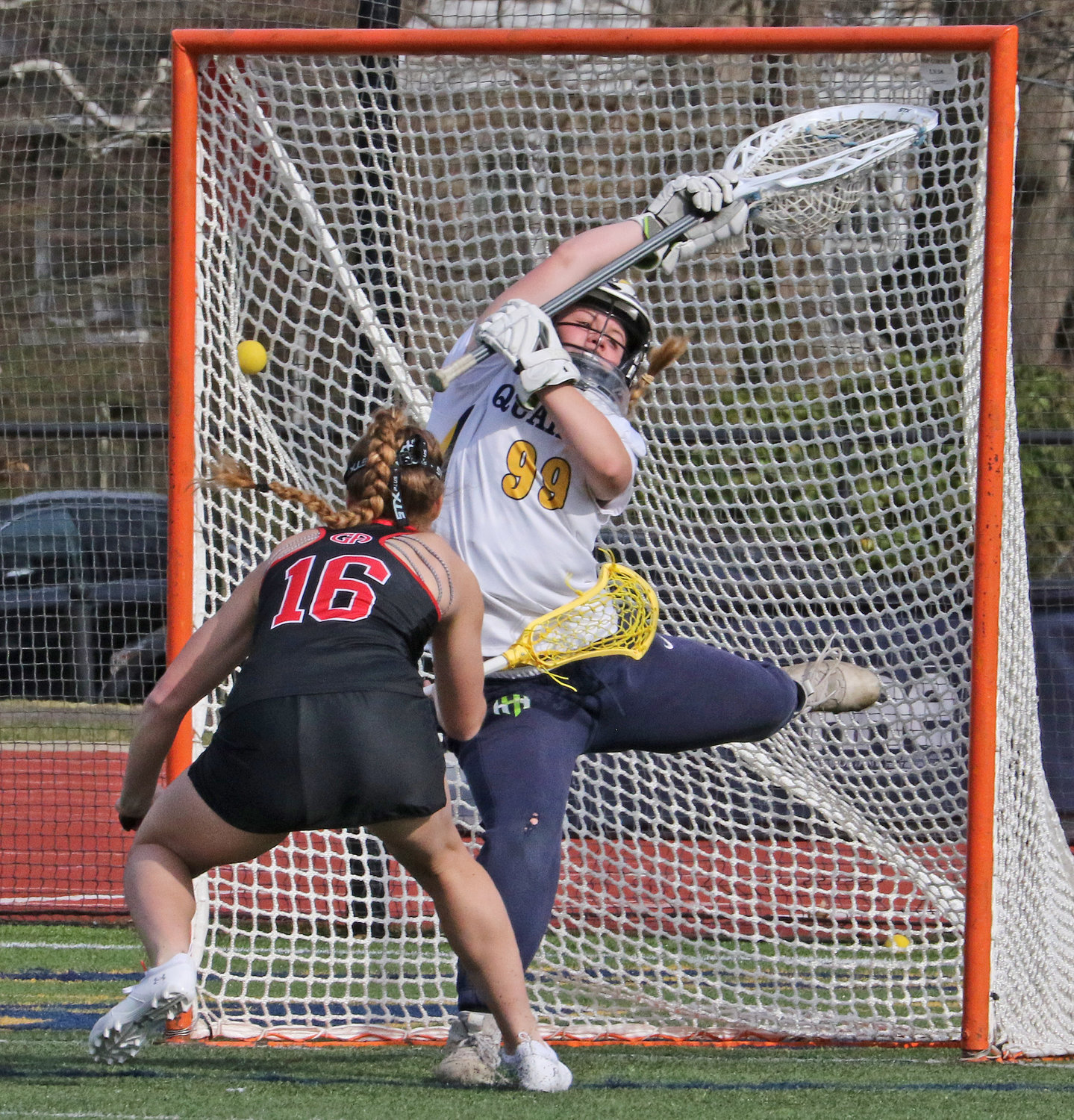 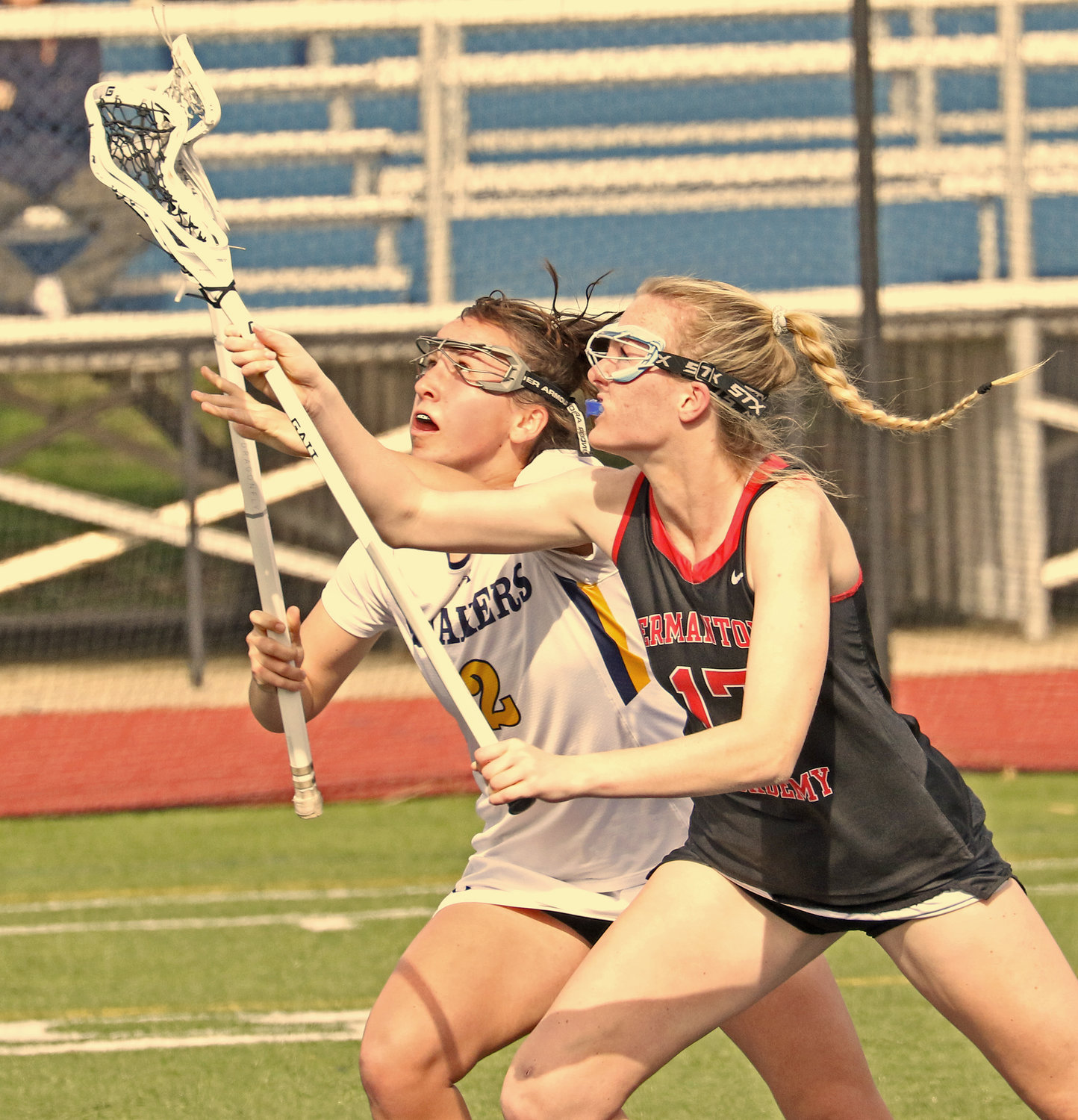 Darcy Felter of the Quakers (left) and Emma Goodwin of the Patriots focus on an airborne ball. Photo by Tom Utescher 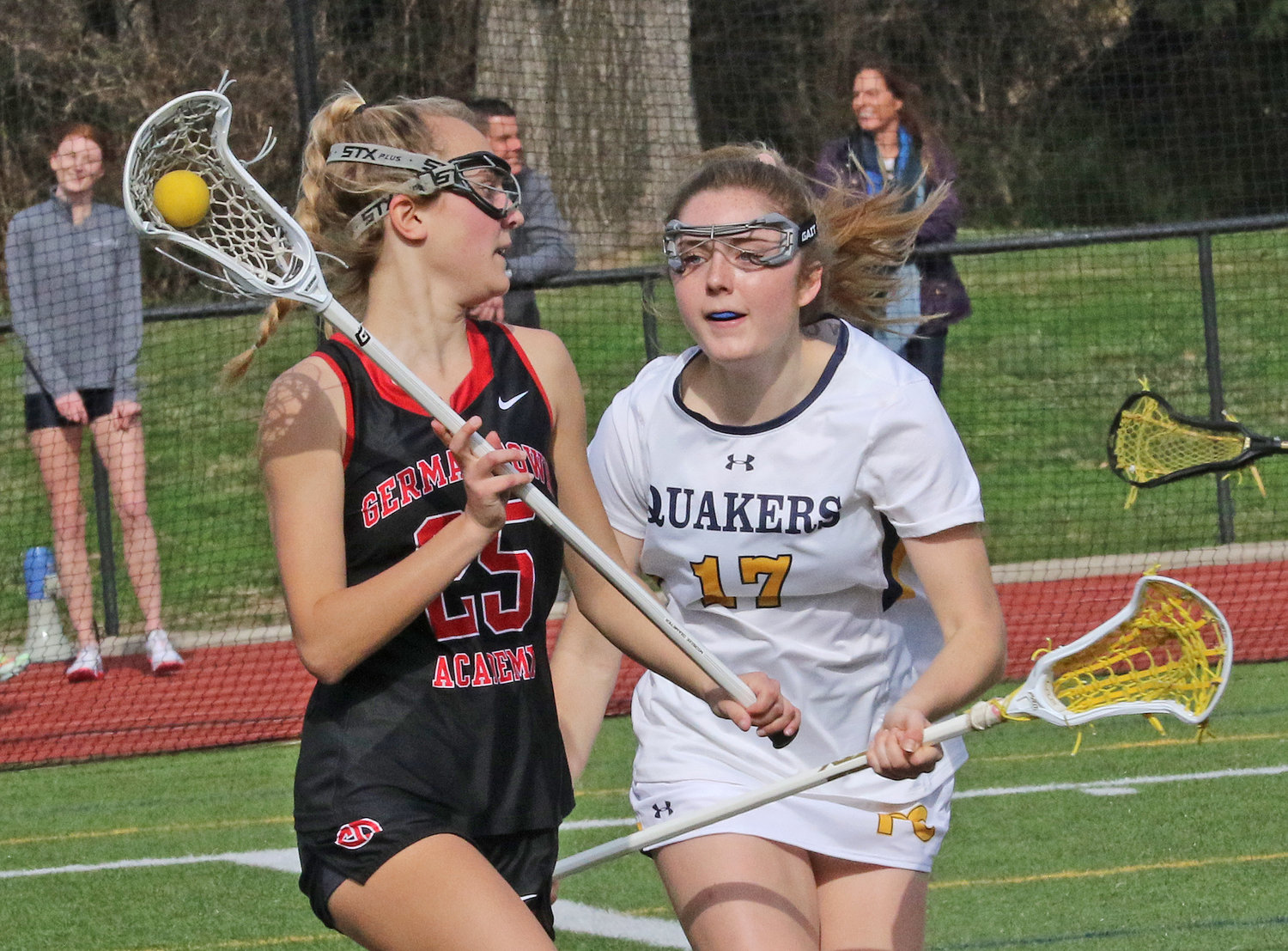 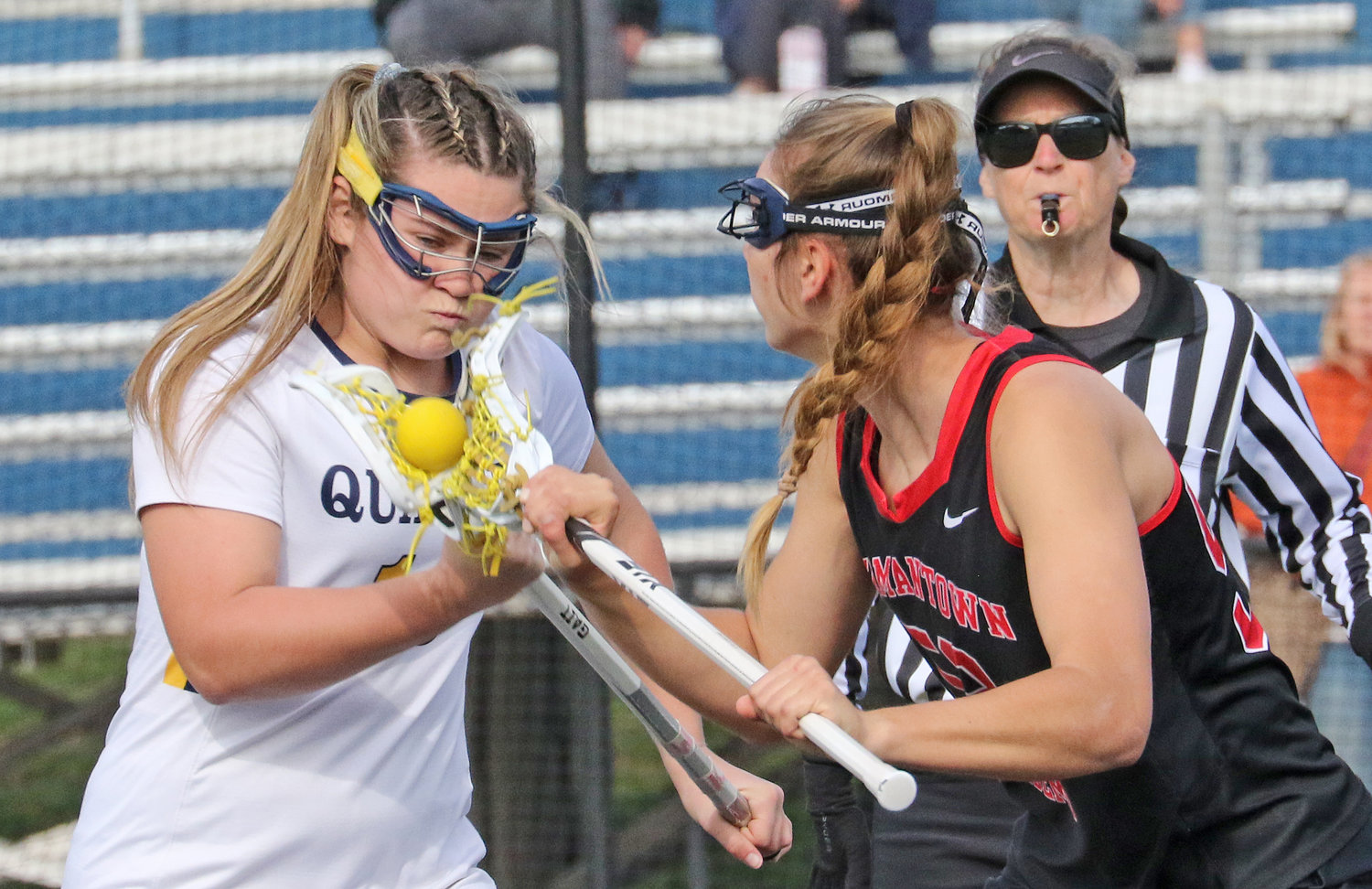 For 2021 Inter-Ac League girls' lacrosse champion Penn Charter, the defense of its title began last Tuesday with a visit from Germantown Academy. At first glance, it didn't appear that the Quakers were meeting a particularly daunting league foe; GA had finished well under the .500 mark in league play last spring and had lost to Charter by scores of 22-9 and 14-6.

It turned out to be a different game than many people had envisioned, except for the GA Patriots. After falling behind early, Germantown came back to lead 9-8 late in the contest. The Quakers pulled even and then scored with 16 seconds remaining for a 10-9 victory in what was the first official game of 2022 for both sides.

A senior who is headed for the University of North Carolina, Darcy Felter, scored both the tying and winning goals for Penn Charter. She and junior Bea Buckley each finished with a hat trick, while senior Maddie Shoup (University of Colorado) scored twice.

When Penn Charter scored three times in the first two-and-a-half minutes of Tuesday's game, it looked like this match might follow the pattern of last season's encounters. Felter got the scoreboard rolling in the opening minute and soon after that came strikes by juniors Gracie Shoup (who has verbally committed to Ohio State) and Bea Buckley.

However, with four minutes and 18 seconds elapsed, sophomore Giada Ippoldo struck back for GA, scoring from in front of the Quakers' cage. A second goal, by junior Sarah Marvin, was added just over a minute later.

When Smigiel converted off of a free position at the middle of the arc, the Patriots had erased their early deficit with 15:14 still remaining in the first half.

The deadlock stayed on the scoreboard for almost four minutes, then Penn Charter took control, for the time being, with a 4-1 run over the course of the next nine minutes. Felter fed Buckley for the first marker in this sequence, then the Quakers came right back down the field and went up 5-3 thanks to sophomore Grace Walter.

With the clock down below six minutes, Smigiel got one back for GA, but Maddie Shoup netted a goal for Charter, and Buckley then completed a personal hat trick to make it 7-4. The visitors would be back within two for halftime, though. Goodwin looped up top from the left side and then drove down the middle to score with 37 seconds left. PC led 7-5 at the half.

Penn Charter is in its seventh season under head coach Colleen (Magarity) Kelly, who returns an experienced coaching staff. The Quakers won the Inter-Ac championship and were ranked among the top 20 teams in the nation for many weeks in 2021.

Germantown Academy had a 3-9 record in the league last year, but the Patriots seem to be responding well to a new coaching staff. Listed as Interim Head Coach, Jay Foster played in high school, college, and internationally, and has many years of scholastic and club coaching experience. His assistants are Penny Sawyer and Kitty Morrissey. Morrissey's name will be particularly familiar over at Springside Chestnut Hill Academy; she graduated from SCH in 2013 and went on to play for Duke University.

In last Tuesday's game, the Patriots' momentum carried over from the end of the first half to the start of the second. Penn Charter was getting hit with some yellow cards, and after GA Sophomore Caitlin Luviano scored in the second minute of the new half, the Quakers were playing shorthanded when Goodwin tied the match at 7-7 with 3:37 elapsed.

Soon after this, Maddie Shoup shot Charter's first goal of the second half, but with 17:31 remaining in the game the visitors drew even again.

Here, junior Mia Raven was a little behind the goal on the left and fed the ball at the proper height for the six-foot Smigiel to score on an unstoppable quick-stick.

Following a PC time-out, the Quakers had possession on attack for several minutes, and GA's freshman goalie, Sadie Hess, had to come up with two good saves before the Pats finally cleared the ball out. At the other end, sophomore keeper Kayla Joyce made a deft stop on a free position shot by GA's Raven.

Eventually, though, Raven beat Joyce on another free position, and Germantown moved ahead, 9-8, with 7:41 left to play.

Unfortunately for the Patriots, Raven was slapped with a yellow card less than a minute later. When Charter attacked Felter was fouled, and she made sure her free position didn't go to waste as she slammed a shot into the GA cage. The match was tied again, now 9-9, with 6:44 to go.

Soon there was another momentum shift, as Shoup was sent off the field with a yellow card. This was Charter's fourth as a team, which meant the Quakers would be short one player for the rest of the game.

The Patriots held the ball up on offense for a long stretch, apparently draining the clock to have the last shot for themselves. They maintained their keep-away scheme for quite a while, but with 1:15 left they turned the ball over out-of-bounds behind the Penn Charter cage.

The Quakers brought the ball up the field and set up on offense instead of dashing straight at the GA goal. With 20 ticks to go they fired a shot from the left and the ball was blocked by GA, but not held. Felter was ready on the weak side to scoop up the rebound and score with 16 seconds remaining.

GA now had one last chance to tie the game in regulation. Felter controlled the ball off the draw but it was jarred loose. The Pats' Ippoldo scooped up the ground ball, but she, too, lost possession and Felter got the ball back as the final seconds blinked off the clock.

Penn Charter had made the first step in the defense of its league title, but it was already clear that there were going to be challenging obstacles on the path ahead.