An artist's rendering of a “Birds eye view” of the proposed redesign from the West. The view shows[/caption] by Sue Ann Rybak Many Chestnut Hill residents consider the Children's Playground at … 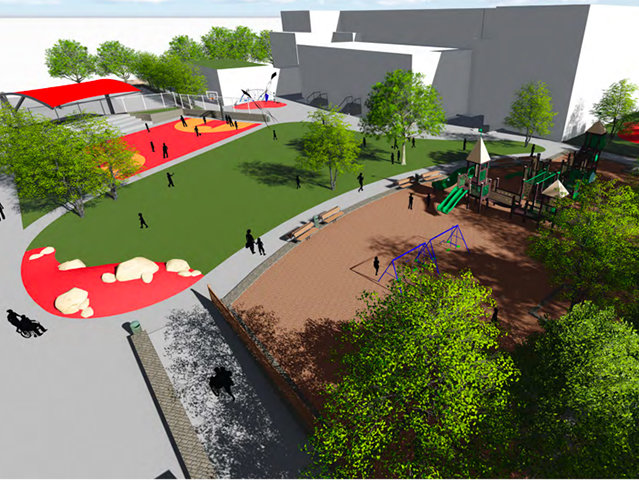 An artist's rendering of a “Birds eye view” of the proposed redesign from the West. The view shows[/caption]

Many Chestnut Hill residents consider the Children's Playground at Jenks Academy for the Arts and Sciences an essential thread in the fabric of this community. It was, after all, funded and built by members of the community as a lasting commitment to the children of Chestnut Hill.

“Learning Landscapes look at the schoolyard environment holistically,” he said.

Gaffigan said research has shown that outdoor education and school garden programs “increase student achievement and contribute to positive attitudes towards science and their environment.”

“The process of developing a Learning Landscape is a community undertaking as local residents provide input during the design process and then participate in the build,” he said. “No two Learning Landscapes are exactly the same, but they do share similar goals. They all support play and exercise in both structured and unstructured settings. Whenever possible, elements that support the curriculum are integrated into the landscape as well.”

The initiative models the Learning Landscapes program in Denver, founded by Lois Brink, chief strategist for The Big SandBox, which transformed 96 dilapidated elementary schoolyards into vibrant healthy green playspaces that can be used as neighborhood parks after school and on weekends. The multi-million-dollar project was funded with philanthropic, private and public dollars.

Brink, a Mt. Airy native who said “it takes a village to raise a child,” hopes to do the same thing in Philadelphia.

“The financing structure that currently exists for public schools will not change if there is not broad public community support,” she said. “In Denver, our work was founded on a grass roots/grass tops approach. When a community supports its local school the political pressure follows and so does the funding. I believe the same thing can happen in Philly. It might take a little longer but we believe it will.”

The Big SandBox hopes to raise a portion of the funds needed for the Mt. Airy Schoolyards Redesign Initiative at its annual fundraiser on April 19 from 5:30 to 8 p.m. at the African American Museum, 701 Arch St. in Philadelphia.

Brink, who grew up on Nippon Street next to Allens Lane Train Station, said while many of her neighborhood friends attended the Houston School, she attended Germantown Academy.”

“I began when the school was in Germantown, but by first grade the school had moved to Fort Washington,” she said. “During my entire K-12 education, I felt disenfranchised from my neighborhood. I always had to be driven to school to attend events. While my neighborhood was very close knit and I have fond memories, there was always a disconnect. I raised my daughters in Denver and they attended our neighborhood public school. They walked to school everyday with friends, sans adults, and it was a wonderful experience and one that I wished I could have had.”

Brink said the average child spends about 1,300 hours at school each year.

“Schools can be a valuable resource in the fight against childhood obesity, but the social and built environment of most public schools fails to support healthy development, and limits access to outdoor play opportunities for sports and physical activity,” she said.

While the majority of School District of Philadelphia's playgrounds fit this description, Jenks' playground has long been the exception to the rule. In fact, this year marks the 20th Anniversary of the playground.

Joyce Lenhardt, whose two adult children attended Jenks, was one many residents who spearheaded the project. She said before the current playground was built there was almost no play equipment except for a small set of monkey bars on the side of the building. The area where the older kids now play used to be concrete.

The Chestnut Hill resident said students at the school were “amazed” to see the community come together to build the playground for them.

“Seeing and participating in the build gave them – and all of us who were involved –  a real sense that when people are committed and come together, they really can accomplish the seemingly impossible,” she said.

Lenhardt said if the current playground was to become neglected and fall into a state of disrepair, it would have a “detrimental effect” on the neighborhood because it is in a highly visible area.

“Many families come to Chestnut Hill with their kids and then stay to go shopping or eat lunch,” she said. “I think everyone appreciates the funding difficulties of the school district and the tenuousness of what we have. We are fortunate that the Friends of Children's Park has continued to fund the sealing of the wooden playground structure, which needs to be done regularly. This is the key to maintaining the life of the structure.”

Haviva Goldman, president of the Friends of Jenks, whose daughter attends Jenks Academy, said local residents have been very receptive to creating a green schoolyard. She said several residents have attended planning and community meetings to discuss proposed changes to the schoolyard.

“Neighbors want to be part of the process and we want to make sure that happens,” she said. “We eagerly welcome young families who utilize the playground to join in to provide energy and ideas to help this redesign gain momentum.

“We see the potential of the schoolyard as both a community space and a learning space for Jenks' students, but in  many ways they are intertwined. We want to make sure that the students feel the space reflects their needs.”

She added that last fall, during the design process, Dr. Bambi Yost and her students from Iowa State University met with Jenks' staff and students multiple times “to get feedback in terms of their wish list for outdoor spaces.”

Martha Sharkey, executive director of the Chestnut Hill Business District, said the BID “looks forward to continuing to build a strong partnership with the Friends of J.S. Jenks and the school district” to help create “a strong public school.”

Sharkey, whose two daughters love the Jenks playground, said the playground is located in “the heart of the commercial corridor” and BID wants it to continue to be “full of life and energy.”