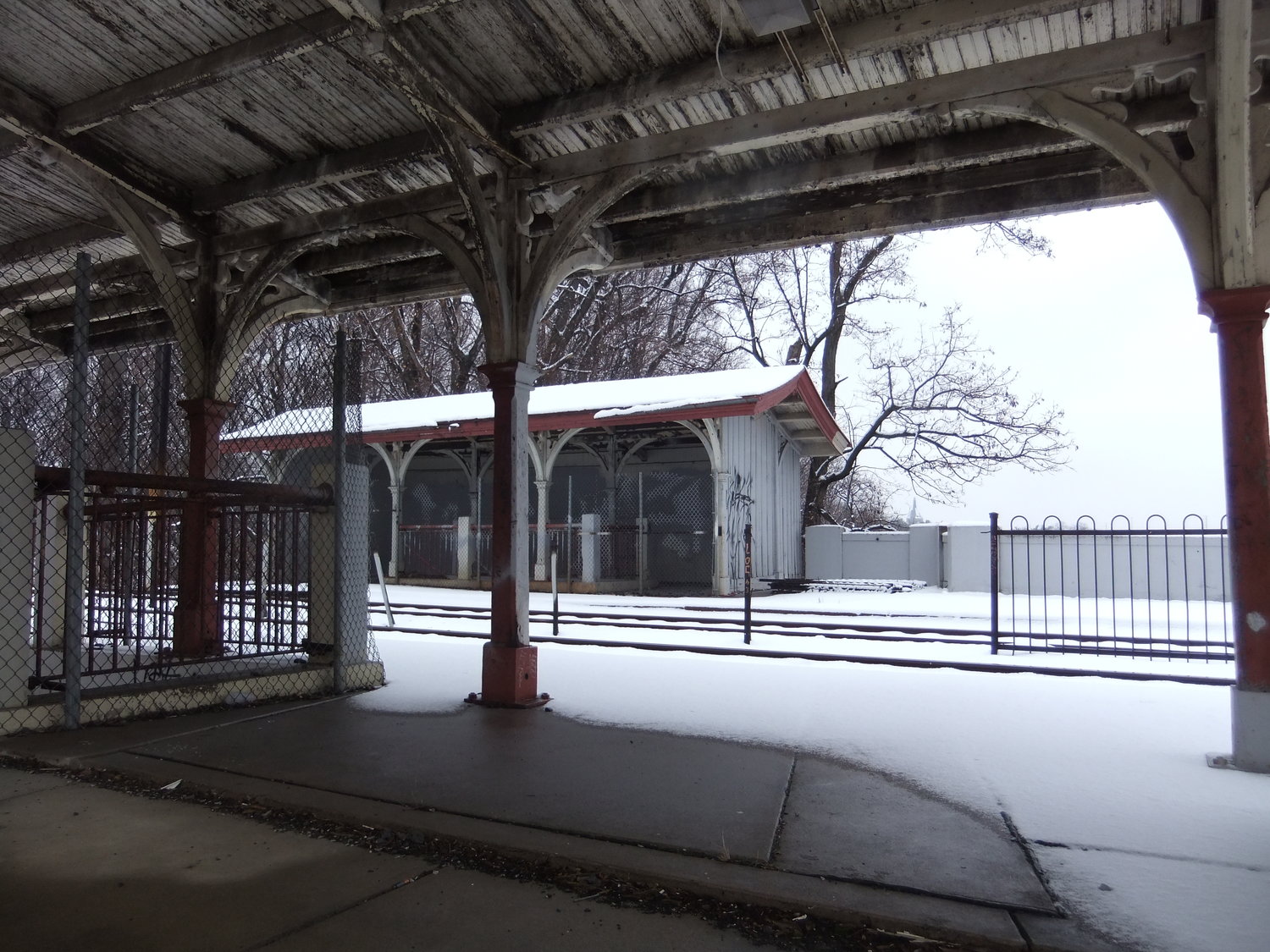 A 2011 view of the inbound canopy, which was demolished earlier this summer, from the perspective of the outbound shed, which remains standing. Photo by Edward J. Picardy 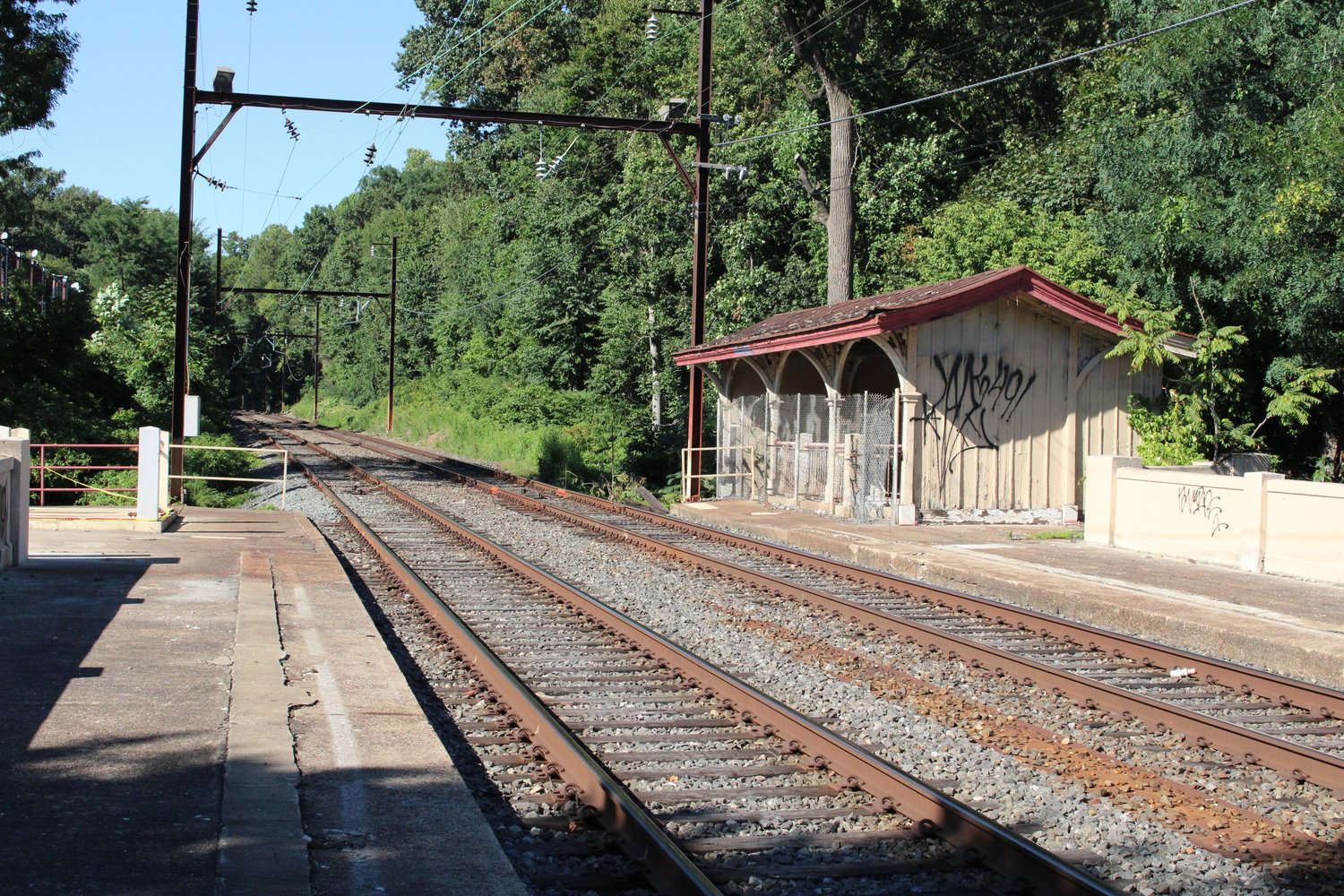 The outbound shelter, which can be seen from the train window when traveling along the Chestnut Hill East Line, is all that remains of Fishers Station. Photo by Tom Beck 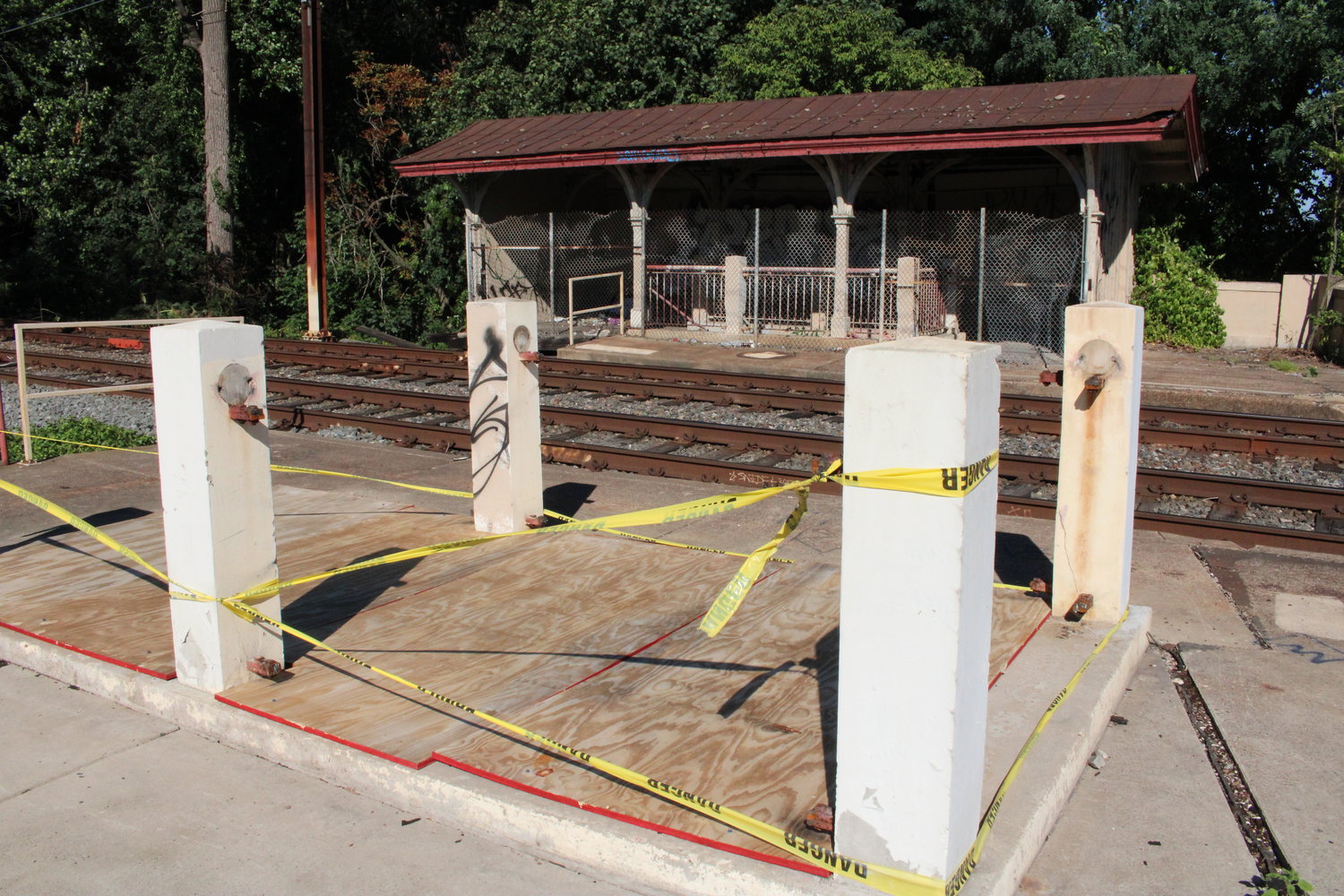 All that remains of the inbound passenger shelter at Fishers Station is a boarded up pedestrian tunnel. The outbound shelter is in the background. Photo by Tom Beck
Previous Next
Posted Thursday, September 29, 2022 10:20 am
by Tom Beck

“That’s the second oldest commuter line in the country, and the first few stops were Germantown, Wissahickon, Wingohocking and Fishers Lane,” said historian and preservation activist Oscar Beisert, who said the shelters were the only remaining traces of those stations, all of which have already been demolished - except, as of earlier this summer, the inbound and outbound shelters at Fishers. Now, just the outbound shelter at Fishers remains.

Although service was discontinued at that station in 1992, passengers on that line can still see the remaining outbound shelter, which is located just outside the boundaries of the East Logan Lane Historic District, between Wayne Junction and Germantown stations.

“You see these terracotta shingles,” said Roz McKelvey, who lives one block from the station. “It’s a reminder that it was one of the first stations on the east side.”

Adding insult to injury, McKelvey said she and many other Germantown residents feel that the station doesn’t get the respect it deserves because it’s in a predominantly Black and low-income neighborhood.

“Because we’re people of color, it's not on somebody’s priority list,” McKelvey said. “It’s not part of the culture they want to highlight.”

“Once again, in Germantown, there’s the feeling of being neglected, the poor stepchild,” said another resident, Joe McCarthy, who is also the vice president of the Baynton Hill Neighbors Association. “There’s always the feeling that if that were to happen in another neighborhood, say Chestnut Hill, it wouldn’t happen. There’d be money and resources to overcome any objections.”

SEPTA spokesperson Andrew Busch apologized on his organization’s behalf for how the situation was handled, but said the canopy’s structural integrity was at risk..

Beisert compared the Fishers Station canopy to the one on Germantown Avenue in Chestnut Hill, which is located right in front of the Chestnut Hill West station, and is clearly leaning slightly to one side.

“They wouldn’t tear down that canopy in Chestnut Hill no matter how much it was leaning,” Beisert said. “It doesn't take a rocket scientist to figure out why [they tore down the one in Germantown]. It’s a poor Black neighborhood and they can get away with it.”

Beisert’s best guess is that the station was constructed in the third quarter of the 19th century. At the time, it also had a full-size building attached on the southern side of the tracks in addition to the two passenger sheds that were connected by an underground walkway.

Beisert said he doesn’t know who designed the main station building, which was demolished in 1983. But he thinks the shelters could have been designed by Joseph Hoxie, who is also believed to have designed both the Germantown Depot and Norristown Station, which were on the same line. Other possible architects are Samuel Sloan and J.C. Sidney, who were known for Italianate architecture and were designing similar structures in that time period.

“But this wasn’t just an Italianate-style passenger shed,” Beisert said. “The eye can see the influence of a pagoda and possibly even Moorish overtones. It is clearly architect-designed. It’s not like they just hired a carpenter to come out and build the station.”

Beisert, who said he was “blindsided” by the demolition, said that makes him furious.

“It's ridiculous we can’t even count on SEPTA to preserve things that are really obvious historic resources,” Beisert said. “There was no real meeting with the community.”

“It’s horrible to take down another piece of American and Germantown history because they think people aren't going to say anything,” said McKelvey, who called the canopy “a staple of the community.”

Busch said that SEPTA had liability concerns because people suffering from homelessness were using it as a shelter.

“It’s not a safe place for people to take shelter in,” Busch said. “We have to be careful of that and balance how much we can put into that, as for resources.”

That answer did not satisfy residents.

“They said they want to tear it down because people might be sleeping in it,” McKelvey said. “Well, put a fence around it. Do something to deter that.”

Busch said SEPTA also had planned to take down the outbound shelter, but has now put a hold on those plans due to community opposition.

“We’ve put a halt to anything further, but we do have to figure out a path forward because it is a station that’s not coming back to service. It’s been 30 years,” Busch said. “If something does come up where we have to move on the outbound side, we’re going to make sure we learn some lessons from this and closely consult with the community. But those are decisions SEPTA has to make based on conditions on the site.”

SEPTA has limited resources, Busch explained, and those resources have to predominantly be dedicated towards stations that are in operation.

“It obviously can’t be maintained like we do our in-service stations,” he said.

SEPTA has offered one of the braces from the shed to the Germantown Historical Society, according to archivist and librarian Alex Bartlett.

According to Bartlett, Fishers Station was one of the busiest train stations in the region at the turn of the 20th century, during the height of the Industrial Revolution.

“It was fairly close to a series of mills and factories that were somewhere on Belfield Avenue and others on Stenton Avenue,” he said.

But the de-industrialization that followed World War II brought the closure of most of those factories.

“That meant that fewer people needed to use the station,” Bartlett said. “It was used less and less as the 50s, 60s and 70s went on, and SEPTA slowly began to phase out the station.”

Towards the end of its life, the station was a flag stop before its closing completely in 1992.

“Someone would have to be visually standing on the platform, otherwise it would just zip right through,” Bartlett said.