For the girls on the Springside Chestnut Hill Academy field hockey team, last Thursday's Breast Cancer Awareness Month event meant a lot more than simply donning pink knee socks for their game against visiting Agnes Irwin. Gretta Ehret, Wyndmoor native, Penn Charter graduate, and sister of SCH head coach Emilee Ehret, talked to the Blue Devils about her own personal experiences dealing with the disease, and also its impact on women in general. 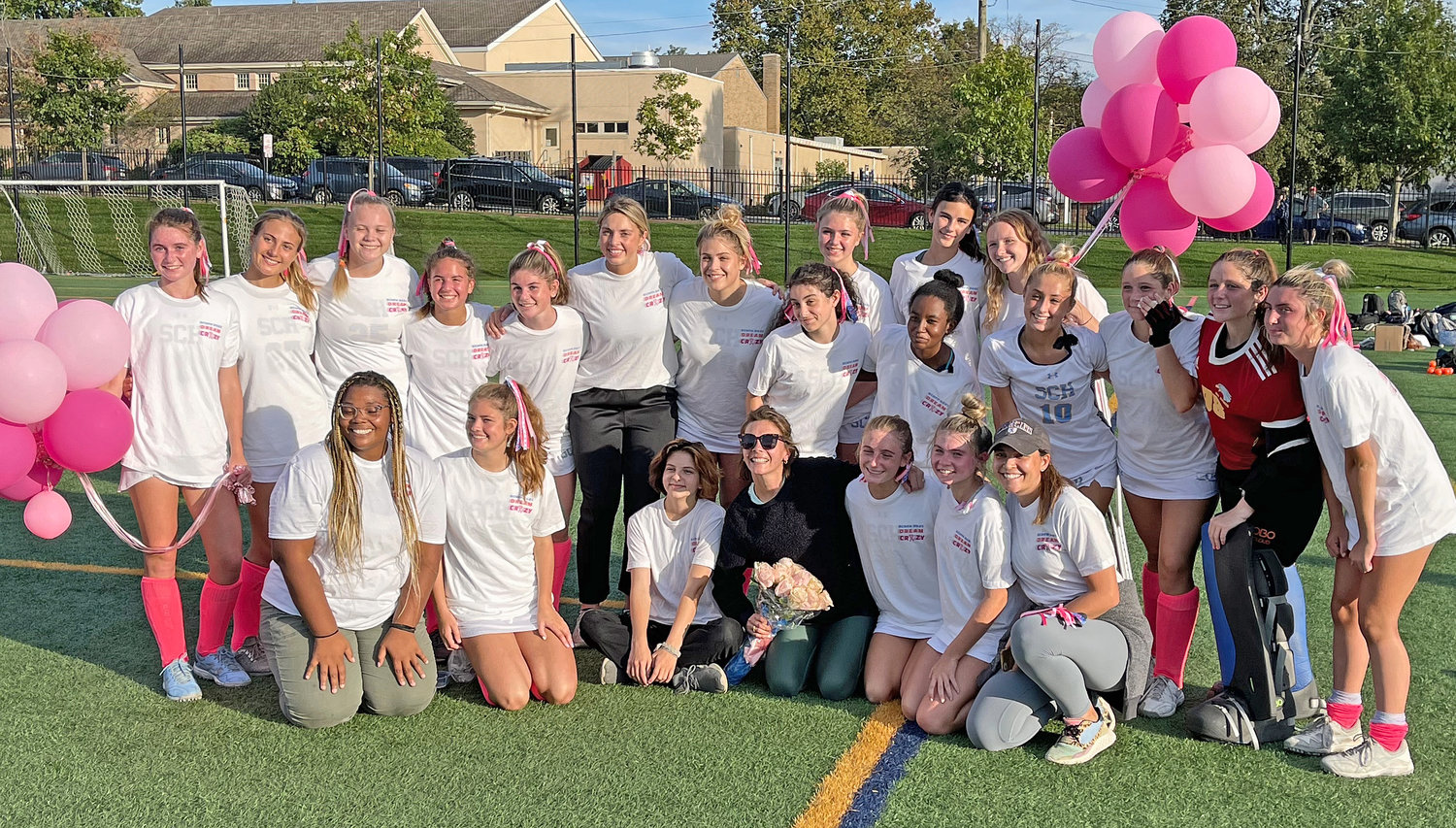 Gretta Ehret, Wyndmoor native, Penn Charter graduate, and sister of SCH head coach Emilee Ehret, talked to the Blue Devils about her own personal experiences dealing with the disease, and also its impact on women in general.

Just as she was preparing to guide the team she coached at Merion Mercy Academy into the 2019 season, Ehret was diagnosed with stage four metastatic breast cancer. The 2005 Penn Charter graduate made progress with treatment, but her trials are not over.

She was able to coach at Merion in 2019 and 2020, and she is now a volunteer assistant coach at her collegiate alma mater, the University of Pennsylvania. She was looking remarkably well during her recent visit to Springside Chestnut Hill.

The fundraisers Ehret is involved with this fall benefit METAvivor, which she noted is a non-profit organization that raises awareness and also funds research and grants specifically to tackle stage four breast cancer. The SCH hockey team undertook various projects, including a bake sale, to raise $500 for the project. Additionally, field hockey teams around the Philadelphia area generated several thousand dollars through T-shirt sales.

The SCH hockey players faced two strong Inter-Ac League opponents in home games last Tuesday, October 12,  and Thursday, October 14. First up were the Irish of the Academy of Notre Dame, who took away a 5-0 victory. The contest against the Agnes Irwin Owls two days later was much closer, with the visitors prevailing 2-1. Springside's overall record of 5-8 includes three games lost by a single goal.

Notre Dame has been a league powerhouse for decades, always fielding a large complement of club players and college recruits. At SCH last week, the Irish were led by sophomore Saylor Milone, who recorded a hat trick with her team's first, fourth, and fifth goals.

Although under pressure most of the time, the SCH defense didn't give up a goal until six minutes remained in the first quarter, when Milone made a tap-in for the eventual game-winner. Milone then assisted on a marker by Reese Czajkowski for a 2-0 count at the end of the period.

A few minutes into the second round, SCH freshman Devyn Conlan spearheaded an attack that ended with her sending a strong shot into the pads of Irish goalie Mia McCloskey. Notre Dame came back to double its lead to 4-0 for halftime, with Aly Maguire and Milone scoring.

The Blue Devils were able to keep the visitors' side of the scoreboard from budging for almost the entire second half. Milone completed her hat trick with 52 seconds remaining for the 5-0 final.

On Thursday, Conlan scored first to give the Blue Devils a lead in the opening quarter. She was already a starter for the varsity last year as an eighth-grader along with her twin sister Colleen, the SCH goalie.

A little less than five minutes into the second quarter, sophomore Kate Sharkey got Agnes Irwin on the board, and the 1-1 tie held up until halftime.

Sharkey struck again late in the third quarter, depositing the decisive goal for the Owls. There were occasional offensive rushes for SCH, but Irwin attacked much of the time during the second half. Credit for keeping it a one-goal game goes to the SCH defense and most of all to Colleen Conlan, who amassed 17 saves for the afternoon.