Piffaro, Philadelphia’s world-acclaimed Renaissance Band, presented its final series of concerts under the direction of its longtime artistic directors Joan Kimball and Robert Wiemken on May 13-15. 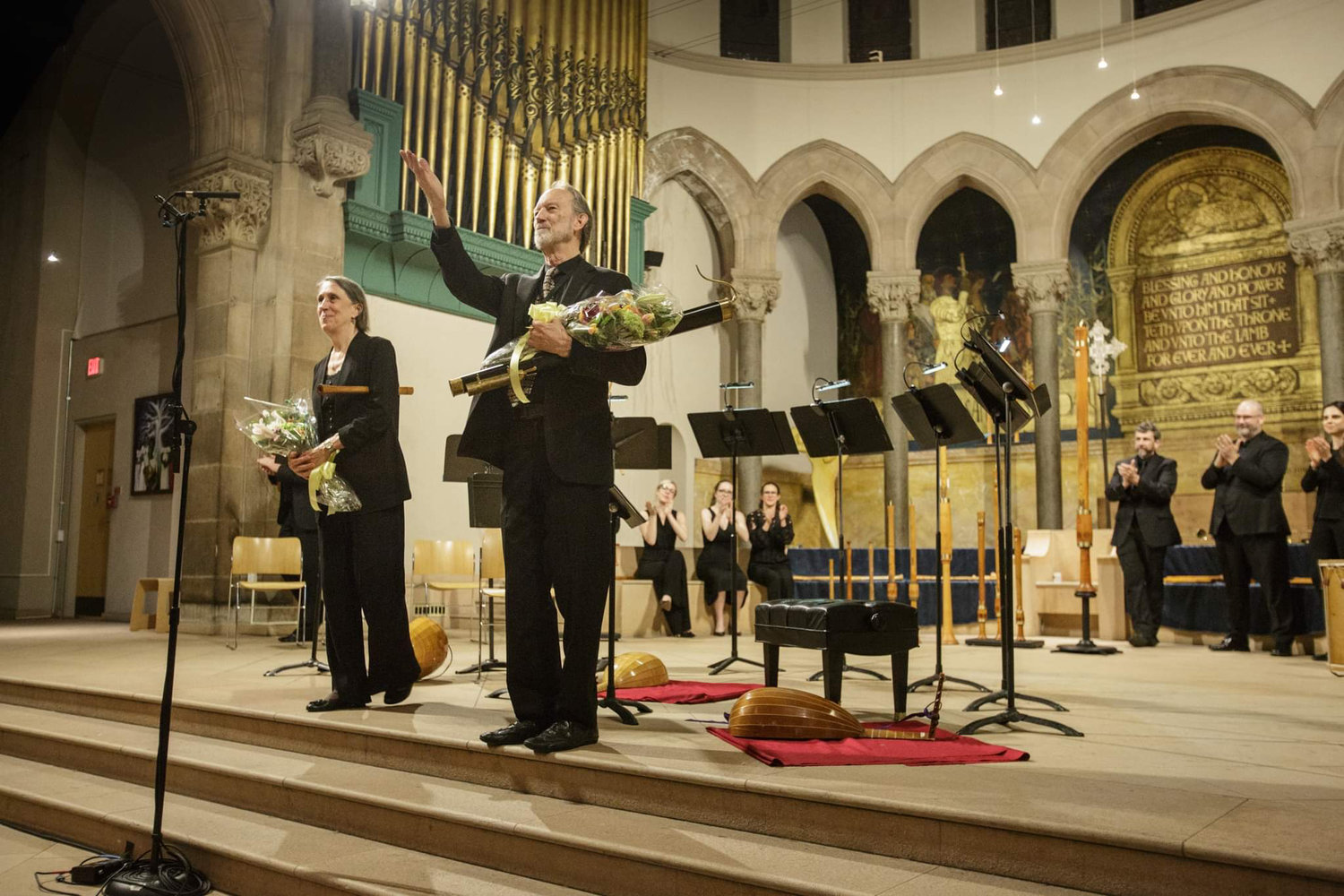 Piffaro, Philadelphia’s world-acclaimed Renaissance Band, presented its final series of concerts under the direction of its longtime artistic directors Joan Kimball and Robert Wiemken on May 13-15. The performances were given at the Episcopal Cathedral of Philadelphia, located in University City; Christ Church Christiana Hundred in Wilmington; and the Presbyterian Church of Chestnut Hill. Along with a good 200 longtime supporters, I heard the Saturday evening performance in Chestnut Hill and loved every moment of the music-making.

When Piffaro was founded in 1980, most of the period instruments ensembles in the United States focused on the Baroque era, which stretches from about 1650 until 1750. The music of Johann Sebastian Bach, George Frideric Handel and Antonio Vivaldi (the era’s “big three”) were relatively well known in America, but a vast trove of forgotten treasures beckoned musicologists and performers.

The earliest Baroque specialists, such as Marc Mostovoy’s Concerto Soloists of Philadelphia performed on modern instruments. But it wasn’t long before newly-minted ensembles began playing on re-creations of the period instruments of the 17th and 18th centuries.

Piffaro was one of the first American bands to reach even further back into music history to uncover scores composed during the 15th, 16th and early 17th centuries. Those were the years, following the Middle Ages, when the European nations threw off the “darkness” of those centuries following the collapse of the western half of the ancient Roman Empire in 476 A.D. to re-embrace the classical culture of Rome and Athens. Hence the term “Renaissance” – “rebirth,” as in civilization following barbarism.

In order to perform the music of the Renaissance, Piffaro’s musicians had to research what the era’s instruments were and how to make them in the modern world, and then literally resurrect the scores, which often existed in nothing more than scraps of manuscripts. Kimball, Wiemken and longtime member Grant Herreid set about this monumental task. Over the past four-plus decades, they have succeeded beyond even their own most optimistic dreams.

As has almost always been the case with Piffaro programs, the weekend’s concerts focused on a particular historic event or personage. This time around it was “The Musical Legacy of Charles V,” first King of Spain and then Holy Roman Emperor.

The audience was shepherded through his birth, regency, crowning, coronation, empire-building, “New World” exploration, death and legacy via the composers who worked during the years between 1501 and 1558.

These were seminal decades in the history of Spain. The previous century of exploration by both Spain and Portugal had prepared the way for both nations’ empires in the Americas. For Spain in particular, these discoveries produced untold wealth in gold that made it the richest nation in Europe as well as the center of one of the world’s largest  and most diverse empires. When its king became the Holy Roman Emperor, that election signified Spain’s position as Europe’s most powerful nation.

The magic of a Piffaro concert has always been the musicians’ ability to transcend music history and become an enlivening musical experience that’s “live and in the flesh.” This is the enduring legacy of Joan Kimball and Robert Wiemken.

‘The Month of Moderns’ at PCCH

The Crossing, the Grammy Award-winning choir founded and directed by Donald Nally, will return to the Presbyterian Church of Chestnut Hill in June and July to present its acclaimed series of new music “The Month of Moderns.”

Dan Spratlan, PCCH’s director of music, will conduct the church’s own Gallery Choir and the Drexel University Chorus and Chamber Singers in concert Sunday, June 5, at 12 noon. The program will include music by Edie Hill, Eriks Esenvalds, Alonso Lobo, Heinrich Schutz, Lewis Spratlan and J.S. Bach.