Senior guard Kait Carter will be leaving Penn Charter but won't be going far; she has signed with Chestnut Hill College. (Photo by Tom Utescher)[/caption] by Tom Utescher Near the end of the 2019-20 … 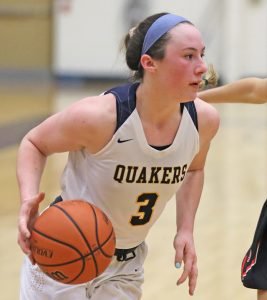 Senior guard Kait Carter will be leaving Penn Charter but won't be going far; she has signed with Chestnut Hill College. (Photo by Tom Utescher)[/caption]

Near the end of the 2019-20 basketball season, one of the top female players at Penn Charter decided to continue her hoops career right here in Northwest Philadelphia.

Senior Kait Carter, a 5'10" guard, has signed with Chestnut Hill College, a member of the NCAA Division II Central Atlantic Collegiate Conference. A four-year starter and 1000-point scorer for the Quakers, she also played AAU basketball for the Philadelphia Belles.

Among the other colleges she considered were CACC member University of the Sciences, East Stroudsburg, and New York's Adelphi University.

Jim Connolly, who just completed his first season as head coach of the CHC Griffins, concurred with Maguire's assessment of Carter.

"She's a really good all-around player," he noted. "She can help do multiple things on the court. She's physically ready for college; she's athletic and she's got good size. She defends well, she rebounds, and being a 1000-point scorer in high school, obviously she can score the ball."

With the end of Carter's career at PC, Maguire reflected, "You think about the talent and skill that you have to replace, but then there are also the intangible things off the court. I probably communicated with her more than anybody on the team, knowing she'd let all the players know where they had to be and when. It was the way she handled everybody, the way the young kids looked up to her."

In the same vein, Carter said, "I think one of my characteristics is being a leader, not being afraid to speak out to people."

In getting to know the Chestnut Hill College program through the recruiting process, she related, "I liked the coaches a lot, and when I did my overnights there I really had fun with the team."

Of course, it didn't hurt that an athlete who recently played on the CHC squad, Shannon Glenn, became an assistant coach at Penn Charter last fall.

"Shannon was a really big influence on why I picked Chestnut Hill," the Quakers standout said. "She told me about how close the team is, and that their whole athletics program is like a family."

CHC's Connolly said, "She's a really nice kid who's been great through the whole recruiting process. When she visited, she got along really well with our players, and they had nothing but nice things to say about her."

The Griffins' mentor probably won't sign more than one additional player due to the youth of this year's squad. Chestnut Hill will have all of its current players back next season, and even then there will only be two seniors on the roster.

Preparing for the next level, Carter said she's striving to improve her ballhandling even more, and to speed up the release of her shots.

She related, "I've been working out with Jimmy Dillon, who's a trainer out my way, and also with Coach Kevin White at Gwynedd Mercy."

White is an assistant coach for the men's team at Gwynedd, where Carter's brother, Matt, has just completed his junior season.

Skills aside, one of her best assets is being willing and able to perform whatever role her team needs her to play in a given contest.

"She probably sacrificed some of her scoring this year," PC's Maguire said, "but her assists and rebounds and steals all went up. She's always trying to get the most out of herself, and she also pushes everybody else to work as hard."