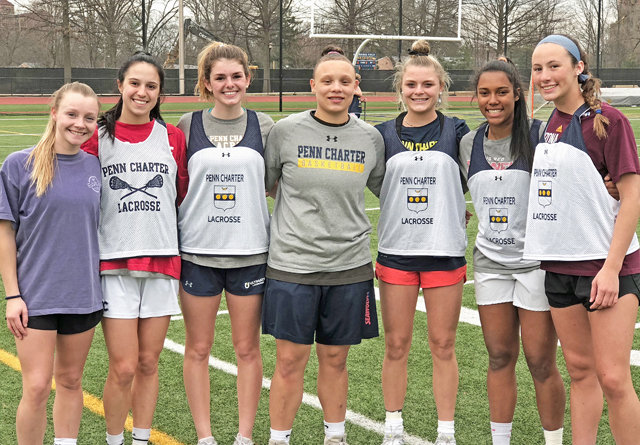 The fact that the girls' lacrosse team at Penn Charter is coming of age is clear just from a glance at the roster. For the past several seasons, a number of freshmen and even some eighth-graders have been listed for the Quakers, but this year just a single ninth grader's name appears.

There are seven seniors on the team who will share captains' responsibilities. Goalie Hayley Hunt already committed to play for Stoney Brook University as a freshman, and Brooke Baker will be playing for North Carolina. Vanessa Ewing, Lizzie McLaughlin, and Leah Sax will join the teams at the University of Pennsylvania, St. Joseph's, and Ohio State, respectively.

Kait Carter recently signed with the basketball team at Chestnut Hill College, and Mackenzie McDonough has not finalized her college choice.

The other juniors are reserve goalie Jamie Kubach and Lilly Avrigian, one of PC's top field hockey players.

Sophomores make up the largest class on the team; there are 10 on the 2020 roster. Three of them, Darcy Felter, Lane Murray, and Grace Turner, already played on the varsity as eighth-graders. Charlotte Hodgson, another Norwood graduate, was named to the USA Select Under-15 Team last year. Lauren Anderson, Ella Curci, Lydia Maione, and Maddie Shoup were all on the varsity roster as freshmen last year. Kayla Bradby saw some varsity time as a swing player, and Brenna McCafferty has moved up from the JV this year.

The lone freshman at this early stage is Maddie Shoup's sister, Gracie, who will probably swing between varsity and JV. Both attended St. Philip Neri School in Lafayette Hill.

The Quakers' program has seen steady improvement under Colleen Magarity, now in her fifth season as head coach. Kirsti Paavola and Debbie White return as assistant coaches, while Rachel Dyer and Bridget Michener are coaching the junior varsity.

Donate now to CH Local
The Latest
Fall for the Arts returns, a tradition intact
This fall, as life in our area gets back to a new normal, one of the surest signs is the return of the Fall for the Arts Festival coming September. 26.