Penn Charter had been a close second to champion Germantown Academy. 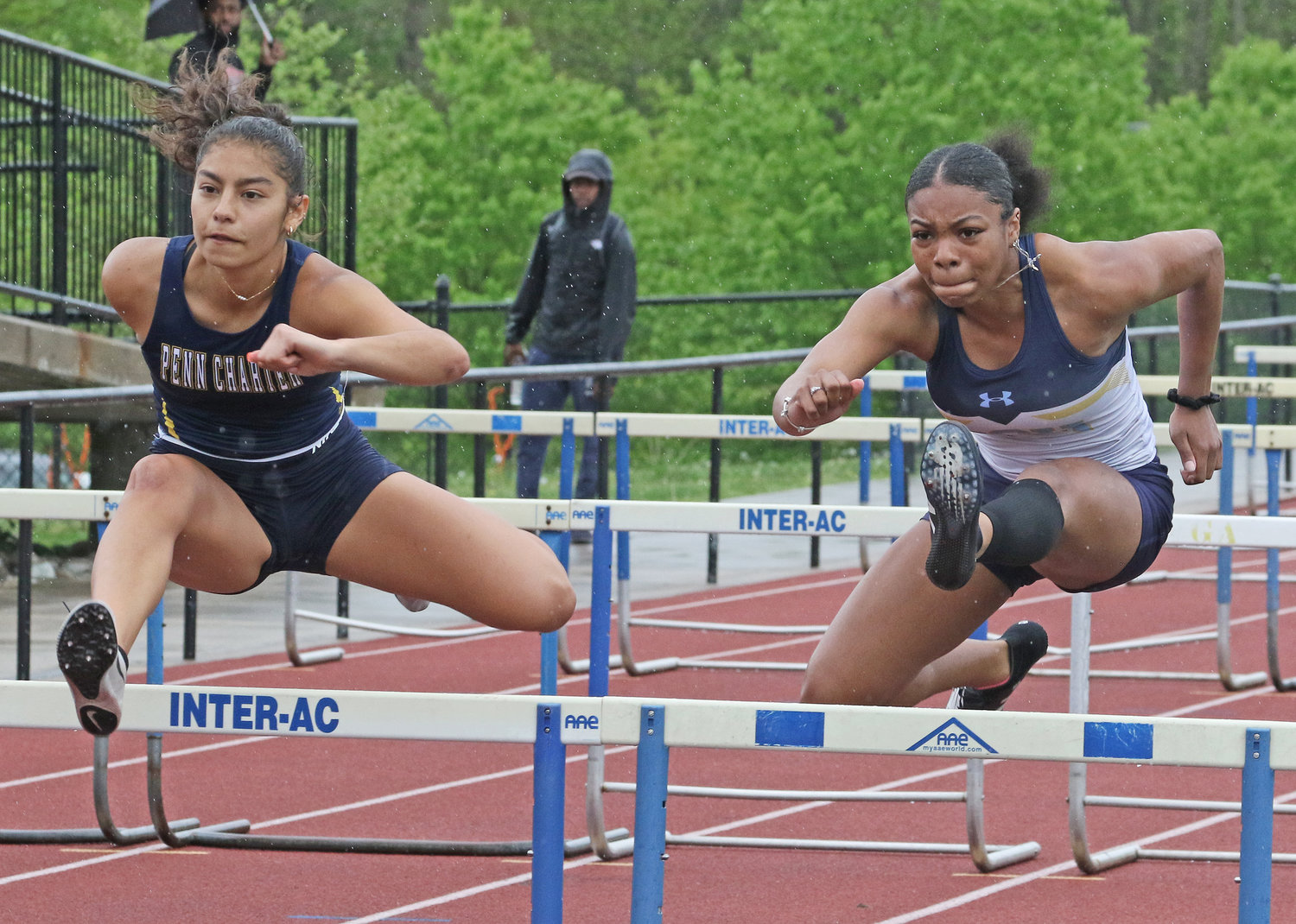 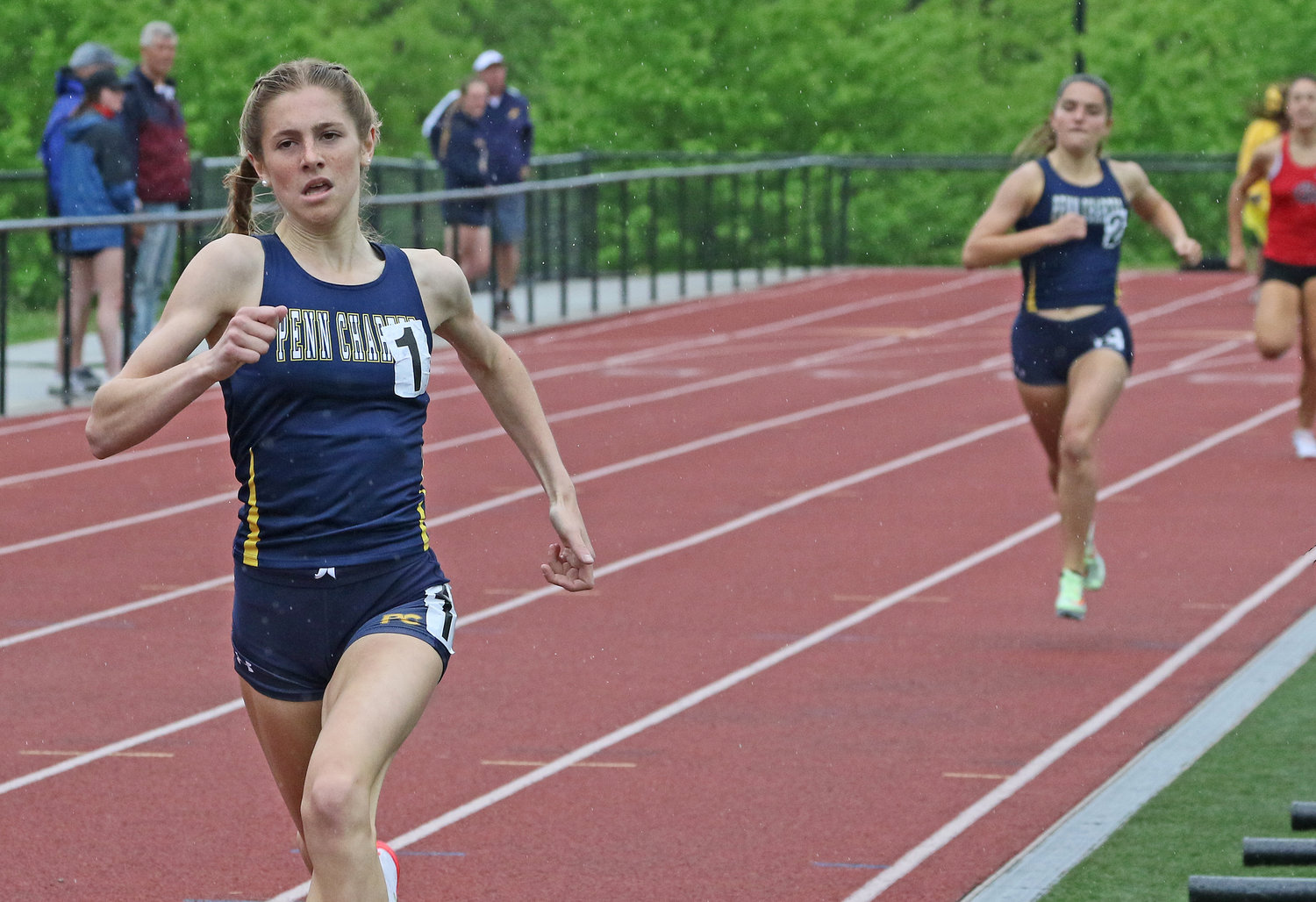 Going down the home straight in the 800-meter run, PC freshman Alli DeLisi (left) has left the field behind.  Photo by Tom Utescher 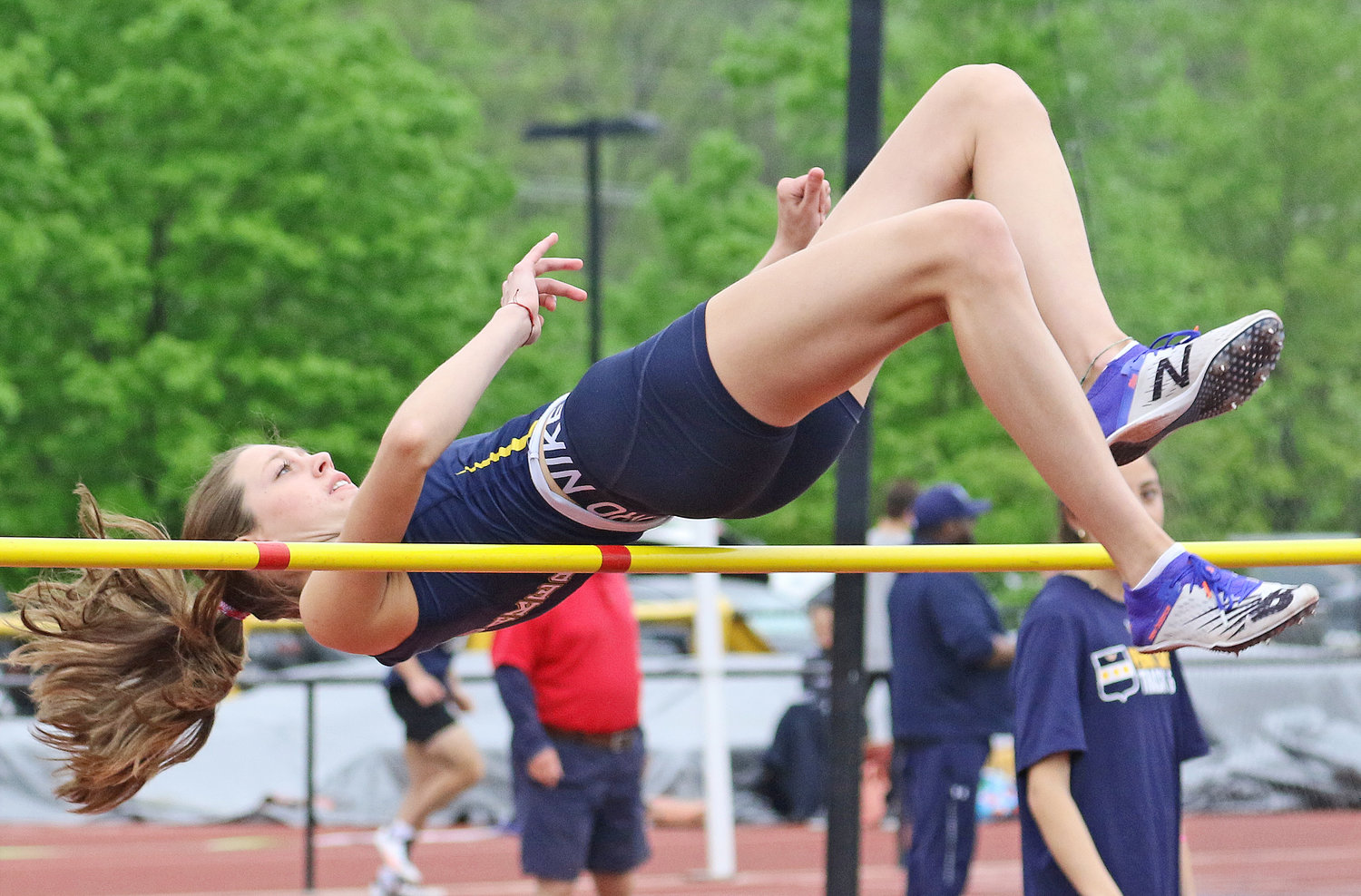 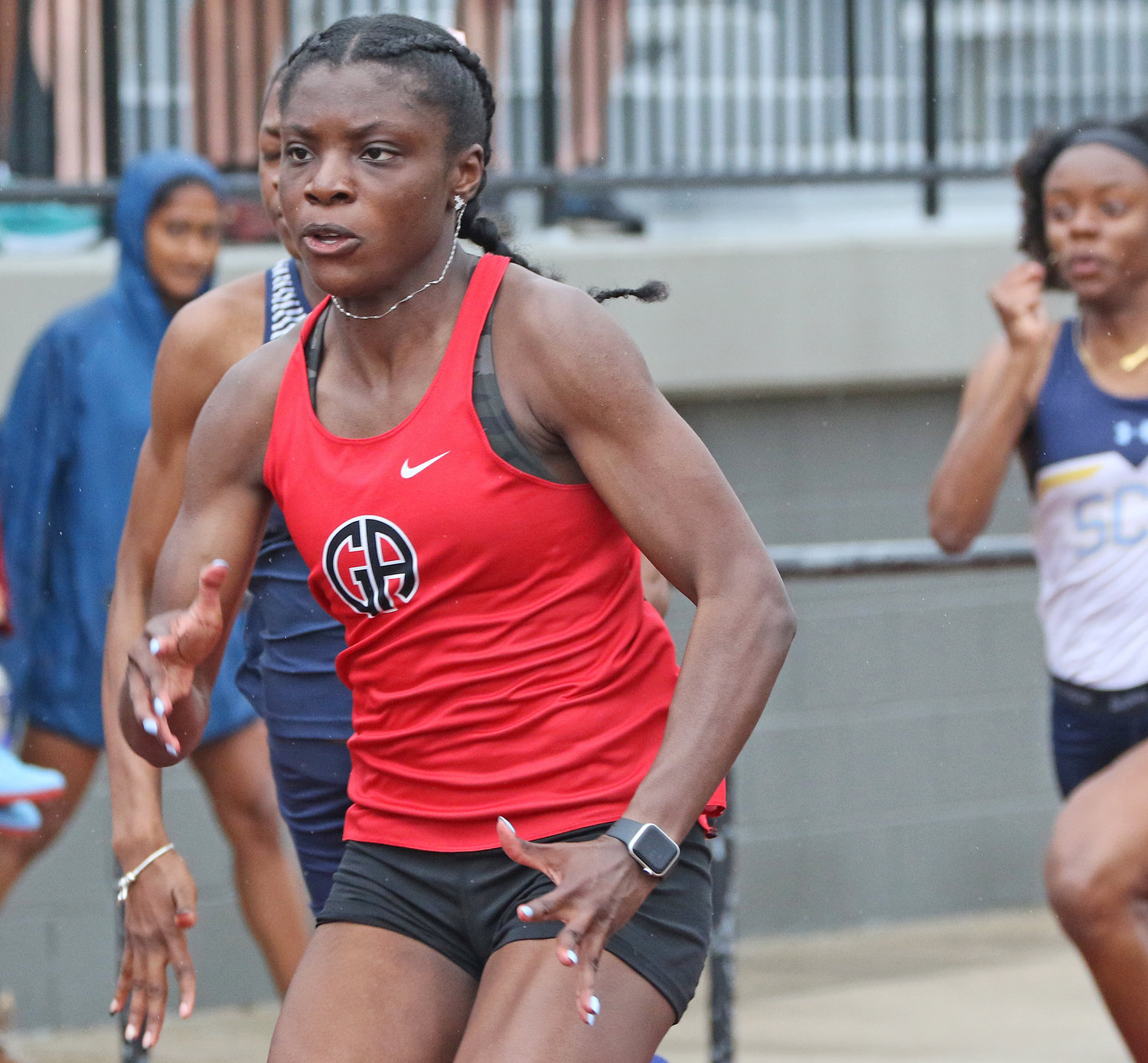 A GA senior headed for Penn, Moforehan Abinusawa won both the 100 and 200-meter dash events.  Photo by Tom Utescher
Previous Next
Posted Wednesday, May 18, 2022 10:07 am
by Tom Utescher

In the last official Inter-Ac League girls track and field meet, in 2019, Penn Charter had been a close second to champion Germantown Academy. In 2021 GA repeated as the top team (although no official champion was declared due to COIVD-19 disruptions), while PC slipped to fifth.

The Quakers were not to be denied in 2022, though. After winning the Inter-Ac cross country title last fall and putting up impressive results in the indoor season, Charter won eight events last Saturday and scored 166.5 team points while Episcopal Academy collected 135.5 to become the runner-up, as it was in 2021.

Germantown Academy, which hosted the 2022 championships, placed third with 81 points and Springside Chestnut Hill was fourth, with 43. After that came Academy of Notre Dame, with 26 points, Baldwin School, with 17, and Agnes Irwin, with 12.

Penn Charter scored in every event except the pole vault, where two Episcopal athletics were the only ones to make the opening height.

"We had too much depth for the other teams," noted PC head coach Candice Lee, "so I knew I could spread them around and they would step up to the challenge."

The field events, as usual, were at the start of the schedule, and Episcopal was expected to build a sizeable early lead in the team scoring. However, Charter managed to come away the five field events with 44.5 points, well over a quarter of its team total.

"I was surprised with the points we got there," Coach Lee admitted. "All of my high jumpers scored, we won the triple jump, and then my triple jumper came back to get second in the long jump."

The triple and long jumper was senior Cassidy Scott, who won the triple at 33'6". Sophomore Olivia Roland was second in the high jump, clearing the winning height but needing more jumps along the way than her EA rival. Senior Amanda Ehrenhalt was third in the high jump; both she and Roland would be heard from later on the track. The Quakers also bagged first place in the shot put, with freshman Mariah Mays (31'1.75") coming through on her final throw.

Penn Charter started out on the track with a win in the 4 x 800 meter relay. Junior Aisling Brady, sophomore Zady Hasse, senior Elena Coupas and freshman Alex Jaffe logged a time of 10:07.00.

Ehrenhalt placed third in the 100-meter hurdles, then eighth-grader Michaela Poland ran the 100 meters, posting the first of her three third-place performances. After Montini's victory in the 1600, PC took third in the 4 x 100 relay.

The 400, which was the sixth of the 11 events on the track, gave the Quakers a big boost over Episcopal. Thanks to DeLisi, Poland (third place), and Shipon (sixth), PC collected 17 points while the Churchwomen did not score.

PC was not only grabbing top places, it was also adding depth points, such as Roland's fifth place in the 100 and her sixth place in the 300 hurdles.

Ehrenhalt emerged as the champion in the 300 hurdles in 44.77 seconds, then the one-two finish by DeLisi and Shipon in the 800 helped The Quakers pile on 19 more points while the EA Churchwomen got none.

Episcopal got a little closer by outpointing PC in the 200 in the 3200, but the gap had already been daunting.

Charter finished the day with its victory in the 4 x 400 relay (4:03.21), going with Brady, freshman twins Alex and Sam Jaffe, and DeLisi.

Throughout the day the skies had been overcast, and in the afternoon there was occasional light rain. The only time it really pelted down was when a group of unlucky girls ran the first section of the 1600.

Sprinting standout Moforehan Abinusawa, a senior, placed first in the 100-meter dash (11.81) and also won the 200 meters, with her time of 24.36 breaking her own meet record that she set as a freshman. She also anchored GA's second-place 4 x 100 relay, where she was preceded in the order by McBride, senior Sydney Cameron, and Goodridge.

Germantown received third-place points from senior Juli Gonzalez in both the 800 and 1600-meter races, and in the 100-meter hurdles McKenna captured second place.

Both athletes also performed in the second-place 4 x 400 SCH foursome, along with freshman Jolie Kaoma and junior Julia Thomson. Grace Hannigan, yet another 11th grader, grabbed second place for the Devils in the triple jump.