They won the 2021 PA Independent Schools championship meet with a team total of 53 points. 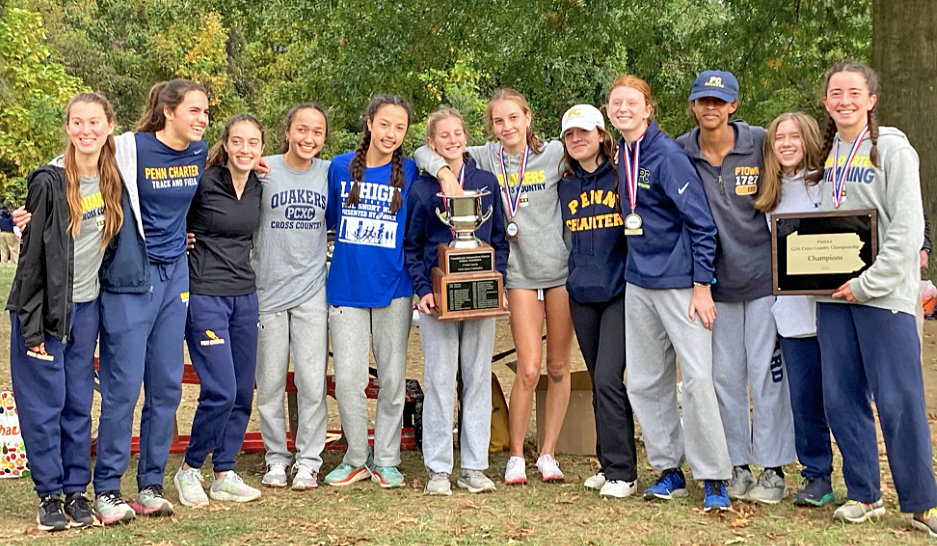 Back on October 18, the girls of Penn Charter found themselves just a few points shy of winning the Inter-Ac League cross country championship, getting edged out by the Academy of Notre Dame, 40-42.

They were determined to do better a dozen days later, and they did, winning the 2021 PA Independent Schools championship meet with a team total of 53 points. This time that put them well ahead of Notre Dame, with its score of 85, while Germantown Friends School was third with 108 points.

The head coach for the PC Quakers, Candice Lee, related, "That Inter-Ac meet left a bad taste in all of our mouths, losing to Notre Dame by two points. The girls were determined to come back and get them in States. Our top five girls [whose results made up the team score] placed in the top 20, and that's really an important factor in the big meets."

Like the Inter-Ac's, the PAIS meet was held on the storied course at Belmont Plateau in Fairmount Park. The league's individual champion was Quakers freshman Alli DiLisi, a new student at Penn Charter this year. At the Indy Schools meet, she finished second with a time of 19:39.30, coming in between a pair of GFS seniors. Anna MacDonald of the Tigers was the individual champion in 19:26.60, while her classmate Annika Marcelis placed third in 19:47.30.

However, all five Penn Charter scorers would be across the line before another GFS runner finished. While PC senior Olivia Montini came in fifth overall (20:16.00), Notre Dame had no one in the top 10. A trio of Irish runners, led by junior Therese Trainer, took 11th, 12th and 13th.

Just after them, in the 14th spot, came Charter senior Lane Murray (who will be swimming in college), turning in a time of 21:22.80. Another 12th-grader, Julia Dolce, secured 16th place for Penn Charter (21:25.50), and the team's score was locked in when freshman Alex Jaffe finished 18th

The Jaffe sisters had come up through Penn Charter's middle school, and they and the new classmate, DiLisi, complimented a solid core of older runners in the cross country program.

The team's coach, Lee, was new to the team as well, but not to Penn Charter. When PC had to find a new skipper for the cross country squad at relatively short notice, it was natural to appeal to Lee, who had begun to coach indoor track at the school just before the start of the COVID-19 pandemic, and who took charge of the girls' outdoor track program, as well.

While in high school, Lee had run for Philadelphia's well-known Mallery Challengers Track Club. She went on to become a middle-distance runner at Virginia Tech, also performing as a jumper and a hurdler. She is an experienced coach, as well, having joined the staff of the Infinity Track Club in 2010.

There is a fair amount of crossover between the track and cross country teams at Penn Charter, and Lee explained that the restrictions imposed at the start of the COVID pandemic had resulted in disappointment for some of her indoor track runners.

"We were set to go to Nationals and run two big relays that would've placed up at New Balance," she said. "Some girls who are seniors now were a part of that, and it was taken away from them the day before we were supposed to go. That made them even more determined to accomplish as much as they could in their time left in high school."

The 2021 cross country team ran well all season. The Quakers were third in their division at the Briarwood Invitational and second at the Paul Short Run, and they were team champions at the George School Invitational.

After their near miss for a title at the Inter-Ac meet, Lee noted that at the PAIS championships, "Our runners were more aware of their placing, and they pushed each other for higher places."

Citing an important asset for any group of athletes, Lee said, "There was good chemistry on the team; they looked on it as a family. They always motivated each other to do better in meets, and in practice, as well."