On December 1 the Quakers launched their 2021-22 season playing the Abington Friends Kangaroos, and PC prevailed, 55-22. It was the team's first appearance in Penn Charter's new Graham Athletics and Wellness Center and the 100th win with the Quakers for head coach Joe Maguire, now in his seventh season with the squad. 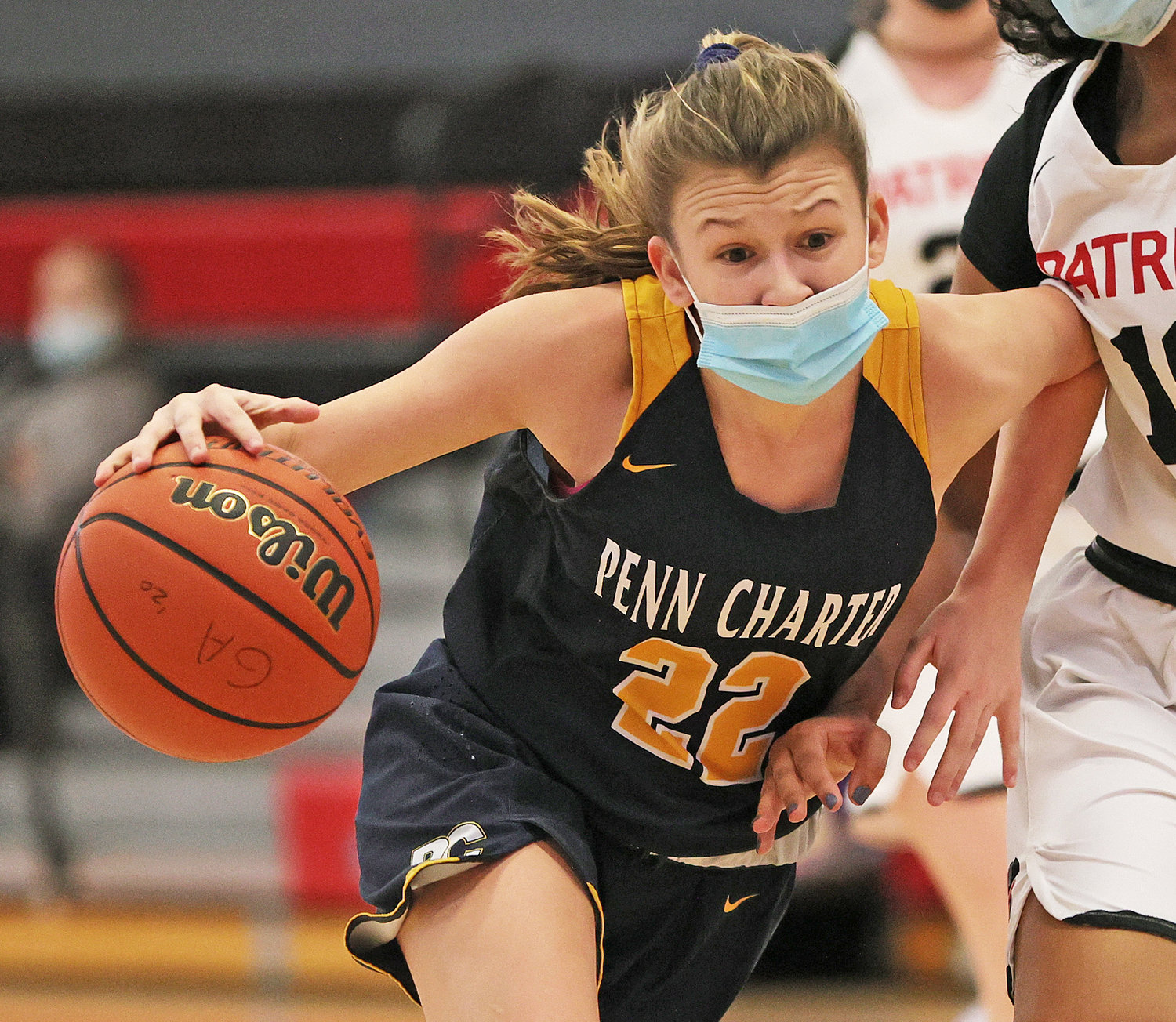 One of three seniors on a young Penn Charter squad, guard Maddie Shoup should be able to lose the facemask this season.
Tom Utescher
Posted Tuesday, December 7, 2021 6:30 am
by Tom Utescher

In early 2020, the last time the Pennsylvania Independent Schools Athletic Association held a girls' basketball state tournament, Penn Charter ended its season with a 65-59 loss to Abington Friends in the championship game.

Last Wednesday, the Quakers launched their 2021-22 season by playing those same Abington Friends Kangaroos, and this time PC prevailed, 55-22. It was the team's first appearance in Penn Charter's new Graham Athletics and Wellness Center and the 100th win with the Quakers for head coach Joe Maguire, who is now in his seventh season with the squad.

The game was also distinguished by an impressive varsity debut for freshman guard Kaylinn Bethea, a new student at Penn Charter this year. She led all scorers with 19 points while collecting seven rebounds and eight steals. The returning junior tandem of Aleah Snead and Bella Toomey also made a significant mark on the stat sheet. Snead, a tall guard, recorded 15 points, eight boards, and five steals, while Toomey, a forward, logged 10 points, eight rebounds and five steals.

In an abbreviated 2020-21 season, no official Inter-Ac League champion was crowned, but Penn Charter shared first place with the Academy of Notre Dame. Each team won on its home court in the home-away series, while winning all of their other contests against league rivals. Germantown Academy, which captured outright or shared the Inter-Ac championship from 2015 to 2020, finished third last winter, losing twice to both the Quakers and the Irish.

Charter was ready to go for the 2021-22 season tip-off last week, bolting to an 18-3 lead over the first five minutes and settling in at 23-7 at the end of the opening quarter. Abington Friends played better in the second period and saw only two points added to its deficit for a 34-16 tally at the half. PC pulled away again in the second half, outscoring the 'Roos 21-6 as Maguire filtered his entire roster onto the floor during the fourth quarter.

Senior forward Amani Rivers, sidelined by injury for much of the past two seasons, contributed four points and five boards, and the Quakers received three points from fellow senior Kayla Bradby, who also plays soccer and lacrosse for PC. The other four points were provided by freshman guard Kendall Small.

The third senior on the PC roster is tenacious guard Maddie Shoup, a three-sport athlete. Both she and her junior sister, Gracie, were out of town last Wednesday. Each of the siblings has committed to play lacrosse in college, and they were starters on PC's top-20 nationally ranked team last spring.

The Quakers graduated five players from their 2020-21 team, but only guard Kaitlyn Hnatkowski was a regular starter. Unfortunately, Penn Charter will be missing an impact player who is still a junior at the school. Kelsey Bess, a guard/forward who has been on the varsity team since she was in eighth grade, has been sidelined with an ACL injury.

This winter Coach Maguire will once again be assisted by former Penn Charter standout Brianna Butler, who started for Syracuse University in the 2016 NCAA championship game. Assistant Lauren Gold is an Abington Friends grad who both played and coached at Shippensburg University. Her younger sister, Camryn, played for Penn Charter for one season. The third Quakers assistant this year, Chris Burnett, is a member of the Penn Charter faculty who has experience coaching boys' basketball.

While vying for the Inter-Ac title this season, the Quakers can expect challenges from the usual suspects. Notre Dame returns a strong team headed by prolific shooting guard Maeve McErlane, a DePaul signee.

Germantown Academy, still the official defending league champion, also has a talented squad and will be looking to step back into the limelight.