In the first few weeks of September, Penn Charter's field hockey team has been dominating the Friends Schools League. While a Quaker school, PC actually belongs to the Inter-Ac League, but in non-league matches prior to the start of league play, the Quakers have defeated three FSL teams in a row. 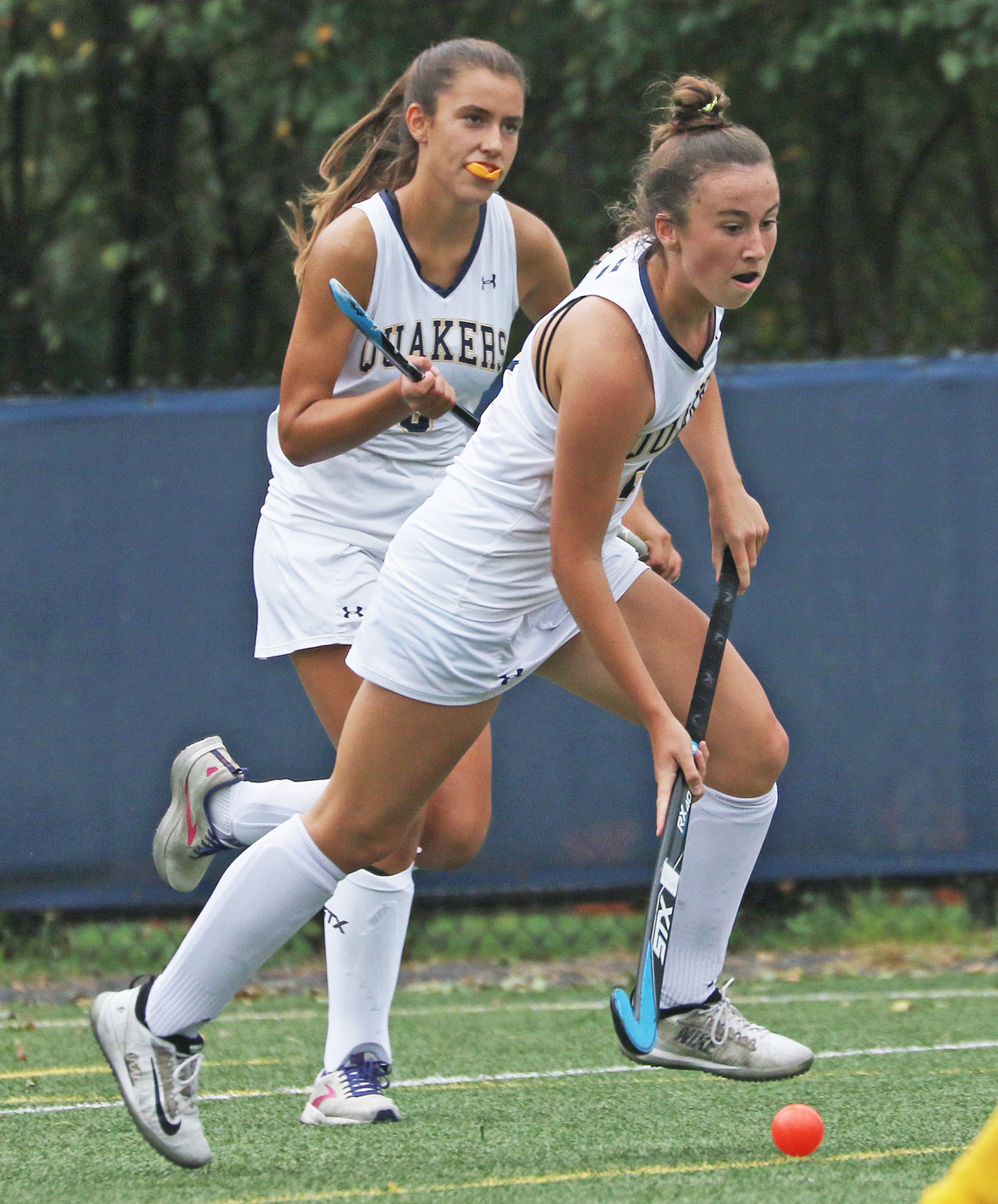 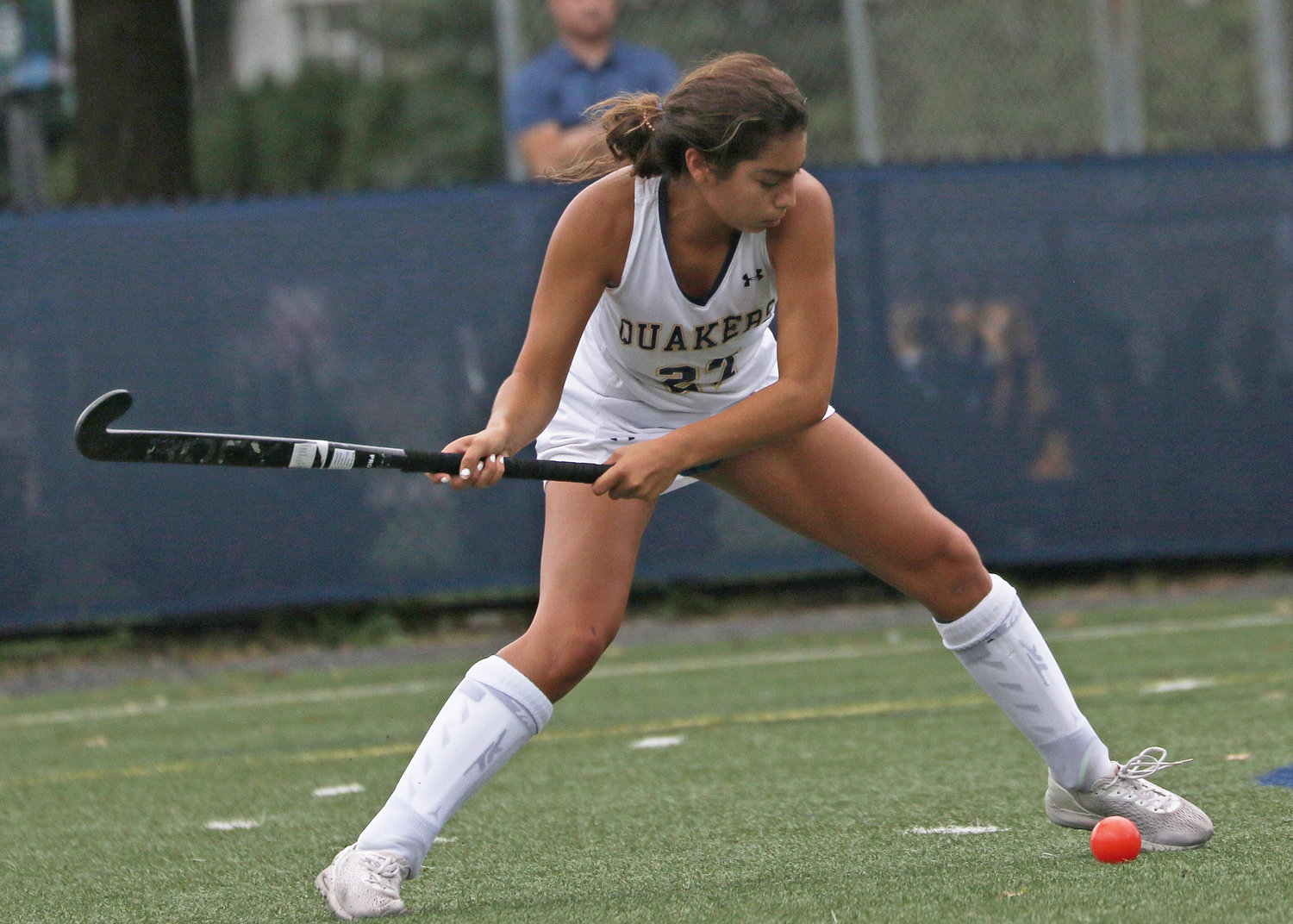 Amanda Ehrenhalt, a PC senior, winds up for a whack at the ball.
Tom Utescher
Previous Next
Posted Monday, September 20, 2021 8:00 am
by Tom Utescher

In the first few weeks of September, Penn Charter's field hockey team has been dominating the Friends Schools League. While a Quaker school, PC actually belongs to the Inter-Ac League, but in non-league matches prior to the start of league play, the Quakers have defeated three FSL teams in a row.

The first to fall were the Academy of the New Church (1-0) and Friends Central (8-0), and last Friday afternoon Charter took down visiting Friends Select School, 5-1.

Junior Alexa Glomb and sophomore Colleen McLafferty each scored twice, and junior Sydney DelBello added a goal as PC took a 5-0 lead over the first three quarters of play. It was the season opener for the visiting Falcons, who scored their lone goal with about a minute-and-a-half remaining.

The Quakers' regular starting goalie, Chloe Pinto, was away, so fellow junior Kayla Joyce (also a lacrosse keeper) stepped in and made two saves for the winners.

The three scorers and Joyce were all in last Friday's starting line-up. Among the other Quakers who either started or who played a lot of minutes coming off the bench were seniors Ella Curci, Hailey Dykstra, Amanda Ehrenhalt, Darcy Felter, Lauren Martz and Grace Turner, juniors Ashlee Bucksar, Emelia Malhotra, and Bea Buckley, sophomores Zady Hasse and Grace Walter, and freshman Eva Walter.

One of the Quakers' coaches this year, Tracy McLafferty, is the mother of 10th-grader Colleen McLafferty. The other, Rachel Dyer, was an assistant for many years; her daughter Kaylee ('21) played hockey for PC and is now in the lacrosse program at the University of Michigan.

Last Friday Penn Charter was on the scoreboard just 17 seconds into the game. Bucksar centered the ball from the right to the scorer, Glomb, whose mother, Frannie (Maguire) Glomb, wielded a hockey stick for the University of Pennsylvania.

McLafferty, who made the penalty corner insertions for Charter, earned an assist on the second goal, the eventual game-winner. She delivered the ball high in the circle to DelBello, who drove it in with 9:38 still remaining in the first quarter.

Early in the second period there were two fruitless corners for Friends Select, and when the hosts were awarded one later on, they didn't get off a solid shot. The Quakers did post a third goal before halftime, though, striking with 2:35 on the clock. From the middle of the circle, Bucksar made a reverse-stick pass down to the left post, where Glomb was in position for the tap-in.

PC attacked relentlessly through much of the third quarter. It was impossible not to notice the high work-rate of Felter on defense and in the midfield. Committed to the University of North Carolina for lacrosse, she's the Energizer Bunny® of Penn Charter stick sports.

The goalie for the visiting Falcons made three nice saves over the first four or five minutes. Next, a long drive into the circle found Glomb, who was fouled to bring up a corner for the Quakers. On this play, DelBello's shot went wide to the right, and another corner failed to produce a fourth goal for the home team.

Number four eventually came with 7:14 remaining in the period. A shot by DelBello from the middle of the circle was blocked, and McLafferty got right on the rebound and scored. The sophomore struck again less than a minute later (6:18), and the final score was on the board.

In the fourth quarter Penn Charter's reserves saw a lot of playing time, but the Quakers were still often in control of the action. They would not come away with a shut-out, though. On a corner sequence, Friends Select's Kate Gunther scored off an assist from Margot Schneider with 1:34 left in the game.

This week, Charter is slated to take on yet another FSL team, Shipley, before opening league play at Springside Chestnut Hill Academy on Friday afternoon. The SCH Blue Devils (1-1) defeated Shipley 4-1 last Tuesday, getting two goals from freshman Devyn Conlan and eight saves in goal from her twin sister, Colleen. The other goals came from junior Kaitlyn Melinson and senior Hannah Pierce.