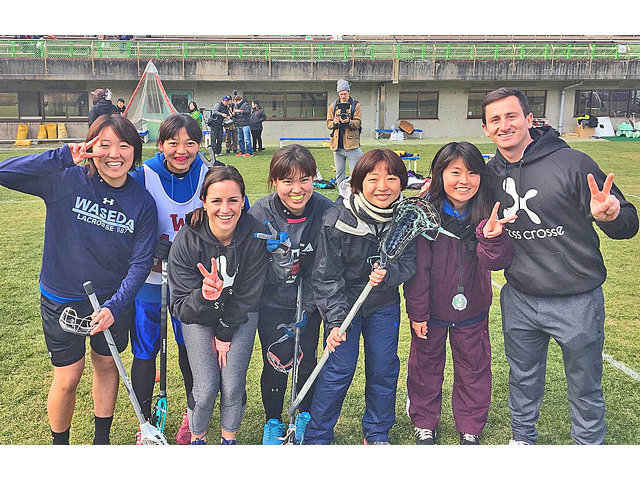 Penn Charter lacrosse coaches Joey Sankey and Colleen Magarity were fortunate enough to travel to Japan to coach lacrosse last month. Magarity, a graduate of Germantown Academy who played on three NCAA championship teams at Northwestern University, is entering her second season as head coach of the PC varsity girls. Sankey, who played for Penn Charter ('11) before becoming the all-time points leader at North Carolina, has returned to the Quakers as an assistant coach for the boys' varsity.

Their recent trip to Japan was organized by Sachiyo Yamada, owner of the Japanese concern Cross Crosse, with the goal of having have some of the best male and female lacrosse players from the U.S. teach at Japanese universities.

Magarity and Sankey started the trip coaching at the Lacrosse Sunflower Cup in Okayama, where there were 600 male and 600 female Japanese college players. At the end of the tournament, the top three teams were able to play against the U.S. coaches and players from the Japan National Team.

The American entourage then went to Kyoto for sightseeing and to meet with the mayor of Kyoto, whose city has never had lacrosse clinics or games on its playing fields. They explained to the mayor the rapid growth of the sport of lacrosse across America and the rest of the world. The mayor approved the Cross Crosse company's request to use the Kyoto playing fields for clinics and games in the future.

After this, it was on to Tokyo to run one last men's and women's training session at the city's main soccer stadium.

"This was truly an amazing experience and trip," Magarity said. "Every single person I met was so kind and respectful. The Japanese players were the most hard working, diligent, and appreciative group of girls. They showed such a desire to learn and try exactly what I was coaching. They were extremely talented and it was an honor to meet and work with so many teams."

Magarity said that, despite the language barrier, "people would go out of their way to help and make sure we had everything we needed at all times. I learned so much from the culture and the people that I will take with me for the rest of my life."