Adina, who started Queenie’s Pets nine years ago, passed up a career in Washington politics to surround herself with canine energy. She is seen here with her own rescue dogs MeloDrama, 4 (right), … 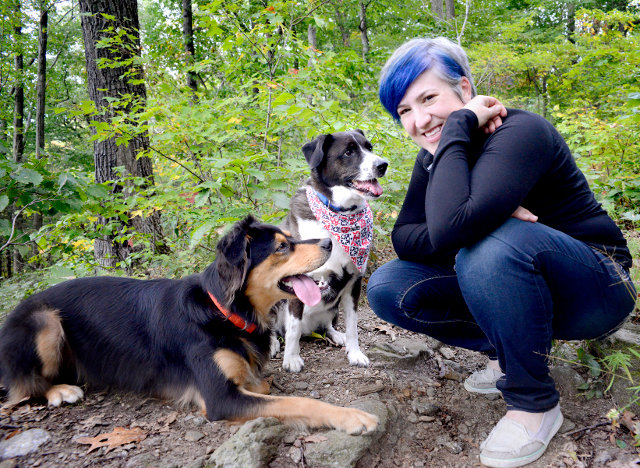 Adina, who started Queenie’s Pets nine years ago, passed up a career in Washington politics to surround herself with canine energy. She is seen here with her own rescue dogs MeloDrama, 4 (right), and Governor Monkey, age 7.5.[/caption]

It's often been said that every dog has his day, but the lucky ones spend their days with Adina Silberstein or her dog walkers, even in a dog-eat-dog world. Adina's Mt. Airy-based company, Queenie's Pets, is part of a phenomenon gaining a toe-hold (or a paw-hold) in upscale neighborhoods around the country. That trend is the professional dog walker and pet sitter, once the purview of the teenager next door but now one of the fastest growing businesses in the country.

This is where Silberstein, who founded Queenie's Pets in 2006, comes in. Adina, 39, grew up in Mt. Airy and still lives there. She graduated from Central High School in 1994 and American University in 1998 with a degree in anthropology and linguistics. (Adina has two sisters who are also Central High grads. Heidi, 42, is an audiologist who lives in Adelaide, South Australia, and Meg, 39, who was adopted, is a pharmaceutical representative living in New Jersey.)

Silberstein, who was the commencement speaker at her college graduation ceremony (with more than 5,000 people in the audience), is clearly a multi-talented and peripatetic individual.

She worked for the late U.S. Sen. Paul Wellstone in Minnesota and was a teacher of special education children in New Orleans, a “back-packer” across the U.S. at age 18, a bike messenger in center city Philadelphia (that career ended when her bike was stolen), a student in Denmark for one year (she even speaks Danish), a counselor of victims of domestic violence in London, a director of catering and sales and a wine buyer for the former Cresheim Cottage Café in Mt. Airy, a member of the Mt. Airy Learning Tree board and a feature writer for an internet “webzine” geared to lesbians and gays.

For nine years Adina operated Queenie's Pets out of her home in Mt. Airy, but last month she moved her business into a storefront at 7174 Germantown Ave., next door to McMenamin's Tavern, at the corner of West Mt. Airy Ave and Germantown.

“With the growth of our company,” Adina explained, “to a current staff size of 16, and projected to continue to at least 20 this year, it was time to move out of my private home office. More importantly, our commitment is to be far more than just 'the other end of the leash.' Having a storefront will allow people to begin to see that what was once a 'cottage industry' is now a true profession with standards, a code of ethics and a solid foundation.

“Our staff members aren't just people looking to pay their way through school. in fact, most of my staff are in their 30s or older and have long since graduated from school, but they are trained in behavior, health and wellness.” 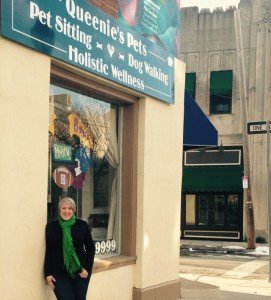 Last month Adina moved her business into a storefront at 7174 Germantown Ave., at the intersection with West Mt. Airy Avenue.

Queenie's goal is to be a community center for pet owners/pet parents. They will be offering workshops on a variety of pet-related topics such as natural approaches to wellness and health care, pet nutrition, canine massage, positive reinforcement behavior/training, pet first aid certification, etc.

They have also officially just partnered with the West Laurel Hill Cemetery, who will be opening a pet cemetery later this year. This partnership has allowed Queenie's to bring on a professional pet grief and support facilitator, and they are now offering a free monthly support group, which started March 12. (The only other pet loss support group offered in Philadelphia is at the U of P Veterinary School.)

Queenie's serves the communities of Mt. Airy, Chestnut Hill, Germantown, East Falls, Wyndmoor, Erdenheim and Flourtown. They have approximately 350 active client households and perform an average of 105 visits per day. When asked how long her lease is for, Adina would only say, “It is our intent to remain in this location for the long, foreseeable future!”

Stephanie Ball, a Chestnut Hill resident and one of Queenie's customers, commented, "I have always been so impressed with Adina, both her love and understanding of animals, her professionalism and good humor."

According to Nancy Elfant of Glenside, “Adina is a wealth of information about pet food, its contents and quality and availability, and she'll help you brainstorm solutions to your pet's problems. She's become my go-to source of information about what and how much to feed my dogs. Invaluable.”

Queenie's staff retention rate is more than seven times the national average for the industry. Among other staffers are Dave Pap, a Queenie's caregiver for eight years as well as a drummer in his band, Sweatheart. Michelle Satchell has been with Queenie's for five years and is also a caregiver, staff manager and window display designer. Beth Monahan escaped the grips of the corporate world two years ago to join their team.

Adina's mom, Marilyn, formerly a Realtor with Elfant Wissahickon, recently started working as Realtor with Weichert. Her dad, Ed, a former social worker who now lives in New Jersey and is awaiting a heart transplant, raised champion German Shepherds, and her parents insisted that Adina, who often accompanied her parents to dog shows, and her two sisters take care of them. They also had two Bernese Mountain dogs, a bearded collie, six cats, gerbils, hamsters, fish (pets, not dinner) and hermit crabs (ditto).

At one time Adina was also a long-distance bicyclist. She once rode the length of Alaska as part of a fundraiser for an AIDS vaccine. She used to wear a pedometer which showed that she walked 12 to 15 miles a day. “But it's my illustrious staff logging those miles now,” she said.

“I had a woman working for me who lost almost 35 pounds in four months because of all the running and playing with the dogs. But for me, running the company is my daily task now, so now I have to log my miles on the gym treadmill.”

His Royal Highness has something to say to Chestnut Hill