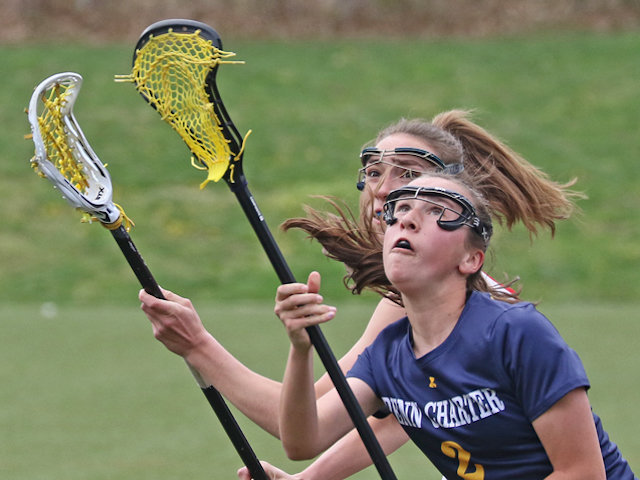 Girls’ lacrosse fans who gathered at Germantown Academy last Thursday were treated to a number of shifts in momentum and some dramatic final moments as the Patriots took on the visiting Quakers of Penn Charter.

Coming back from an early three-goal deficit, PC led by a goal at halftime and later went up 8-5. Germantown then rallied to go ahead late in the second half, and although Charter had the ball up on attack several times in the last two minutes, the Patriots held on for a 9-8 victory.

“It was a very exciting win for us,” said Mary Dean, GA’s second-year head coach.

She talked about how her team had gained confidence progressing from a lopsided Inter-Ac League defeat at the hands of Agnes Irwin to a much closer loss to the Academy of Notre Dame.

“Agnes Irwin is obviously very good, but we were so nervous that we didn’t play like ourselves at all,” she related. “We talked about that, and then when our score with Notre Dame was 11-13, we realized we can hang with very good teams.”

GA, whose four official games thus far have all been played against Inter-Ac opponents, came away from last Thursday’s encounter with a 2-2 record. Senior attack Olivia Doody registered four goals, and one of the two deposited by junior Maddie Burns was the game-winner. Senior goalie Zoe Torrey came up with a dozen saves, several of them on very challenging shots.

Penn Charter, which has seen a good amount of non-league action, left Fort Washington with a 1-3 league record and a 5-5 mark overall. Scoring multiple goals for the Quakers were sophomores Kaylee Dyer (four) and Mia Ferraro (two). Another 10th-grader, Jamie Kubach, is normally the team’s reserve goalie, but she started and went the distance in this one, making eight saves.

“We needed her to step up for us today and she did,” commented Penn Charter skipper Colleen Magarity.

The coach said that while her team was aware of who GA’s most dangerous players are, “We were focusing more on ourselves and trying to bond together. We haven’t quite clicked yet as a unit.”

There would be two Norwood Fontbonne Academy graduates on each side; Burns and sophomore Elise Smigiel for GA, and Ferraro and freshman Charlotte Hodgson for Penn Charter.

After Doody put Germantown on the board during one of the Patriots’ first forays up the field, her freshman teammate Cassidy Palazzo converted off a feed from Burns to make it 2-0 just over four minutes into the contest.

A low free position shot by the Quakers was saved by GA’s Torrey, and almost midway through the first half Doody circled out from behind the Charter goalcage on the left to make it a 3-0 affair. 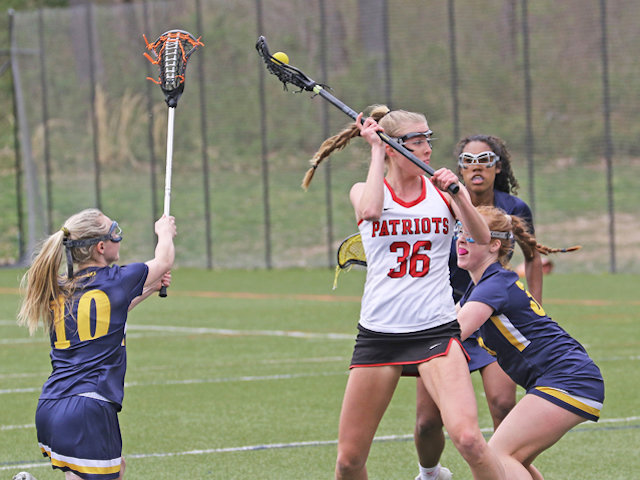 GA senior Charlotte Rapp (center) looks for a cutter near the goal while protecting the ball from the PC players below her. (Photo by Tom Utescher)

Before long – with 14:32 still remaining in the opening period, Ferraro broke the ice for Penn Charter. She made another promising drive soon after that, but Torrey stopped her shot. The Patriots regained a three-point advantage with 10 minutes remaining, when Smigiel scooped up a loose ball near the Charter creased and stuffed it in.

Penn Charter stopped its slide at this point, and only allowed GA to score one more goal during the middle 20 minutes of the contest. The Quakers earned a halftime lead by chalking up four goals in the last six minutes and 14 seconds of the first half.

First, a three-second call against the GA defense set up a free position for PC’s Dyer. She converted with a bounce shot, then scored again with 4:32 on the clock.

Just 19 seconds later, GA’s early lead had vanished entirely, as Ferraro dodged her way past several defenders to tie things up at 4-4. The Patriots called a timeout, but the last goal of the half would also belong to the Quakers, with Dyer completing a personal hat trick with two-and-a-half minutes to go.

“I think once they scored a goal or two, it got into our heads a little bit,” GA’s Dean remarked. “Then they’d get another draw control, and another goal. One thing that’s different about our team from last year, though, is that that sort of mental letdown doesn’t last the rest of the game. We’re able to recover.”

Germantown’s Burns scored off of a free position as the second half got underway, but the 5-5 tie did not last long before Dyer pushed PC ahead once more, also off of a restart. Just 30 seconds later, the count rose to 7-5, with Charter junior Vanessa Ewing slipping the ball into the Patriots’ pen from close range on the right.

Next, a Penn Charter ball lofted into the middle in front of the GA goal led to a sort of one-handed quick-stick by Quakers freshman Darcy Felter. The visitors now had their largest lead of the day at 8-5, but more than 18 minutes still remained.

GA netminder Torrey kept the situation from deteriorating further by turning aside a free-position shot with a little over 15 minutes to go. Now, the Pats began to take pressure off their keeper by carrying the play down to the far end of the field.

Doody assisted on a strike by junior Elizabeth Van Blarcom (almost universally known as “EVB” for obvious reasons), then the senior scored herself about 40 seconds later off of a feed from behind the goal by classmate Cammy Korman. With 11:16 remaining, Doody looped out from behind the cage on her own to pull the Patriots even at 8-8.

The Patriots were resurgent on offense, but they invented problems for themselves on defense. They appeared to weather one Penn Charter possession with under eight minutes to play, but Torrey’s clearing pass was blocked as the ball came out of her stick.

There were no consequences from this on the scoreboard, though, and at the far end Burns put in the eventual game-winning goal. Starting from a free-position, she faked a shot, evaded converging defenders and scored from near the crease on the left just as her shooting angle was about to disappear.

In the final two-and-a-half minutes, a pair of GA turnovers on clears gave the Quakers extra opportunities to go for the equalizer. Their best chance came when a free-position was awarded to Maddie Shoup (a freshman out of St. Philip Neri School), but Torrey held the line in the GA cage.

“I think this is the best game that I’ve seen her play,” the Patriots’ Dean said.

Playing in front of Torrey, sophomore defender Caroline Antonacio has already earned all-star status in her age group, and her older teammates have worked to make the defense mesh into a solid unit.

Dean noted, “Grayson Gross [a senior] had several ground balls, and she had two interceptions, which was big. Annabel Brewer [a junior] has been doing a good job with her transition passes, connecting our defense and our attack. We also have a senior Gabby Hearn, who has earned a starting spot. She has incredible footwork and she’s really good on crease defense.”

PC’s Magarity had been hoping to see a little more consistency throughout the game from her charges. The day before, the Quakers had given a solid 60-minute performance in a convincing victory over Germantown Friends.

“Yesterday, we played the way we’re capable of playing for the whole game,” Magarity said. “That’s really the first time that’s happened, because we’ve kind of been up and down.

“We really just need to learn to finish,” she continued. “I think we’ve outplayed most of the teams we’ve faced, but late in a lot of games we couldn’t put the ball in the back of the net.”