Once had a studio in a funeral home: Osborne's enchanting animal paintings now at Woodmere

Elizabeth Osborne, 81, is seen with her dog, Ramsey, a subject in a few of her paintings now at Woodmere. by Len Lear When my wife and I went to Woodmere Art Museum on March 16, it was to hear their …

Once had a studio in a funeral home: Osborne's enchanting animal paintings now at Woodmere 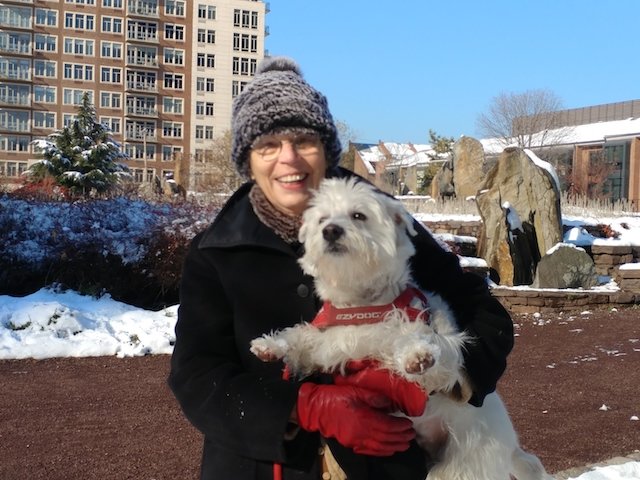 Elizabeth Osborne, 81, is seen with her dog, Ramsey, a subject in a few of her paintings now at Woodmere.

When my wife and I went to Woodmere Art Museum on March 16, it was to hear their weekly Friday night concert that featured jazzy interpretations of the songs of country music legend Patsy Cline.

Before the concert started, however, we walked around checking out the current art installations (after all, it IS a terrific art museum), and we were both blown away by the exhibit entitled “Elizabeth Osborne: Animal Paintings and Watercolors,” which will be continuing until June 24.

Since we are both animal lovers, we would probably be enamored of any group of photos or paintings of animals, even if they were done by elementary school children. But Osborne, 81, a Lansdale native who turns out to be just as charming as her paintings, is a giant in her field whose talent has been lauded repeatedly by her peers throughout her long career.

According to Edward Sozanski, art critic for the Philadelphia Inquirer, “Every shape (in an Osborne painting) is meticulously in its proper place, every brushstroke calculated for maximum effect. Impulse is banished: The paintings are constructed like Swiss watches designed by Matisse. The Matisse allusion isn't hyperbole or flattery ... As with Matisse, especially in his pre-Nice paintings, color for Osborne is more than sensation; it also creates structure … ”

How does it feel to be compared to Matisse, one of the legendary giants of French Impressionism? “Very humbling,” Osborne said in an interview last week. “I have admired him greatly for many years and have several images of his work posted up in my studio.”

After graduating from the Pennsylvania Academy of the Fine Arts (PAFA) and the University of Pennsylvania in 1959 for her undergraduate studies, Osborne was awarded a Fulbright Scholarship and traveled to Paris to study art. In 1963, she became the third woman to join the faculty at PAFA and for many years was the sole female faculty member. She retired from teaching at PAFA in 2011. 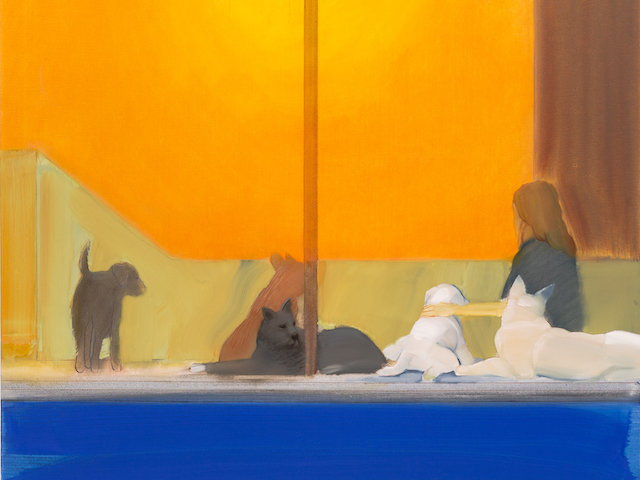 Osborne’s favorite subjects, dogs, are seen often in her wonderful collection now on exhibit at Woodmere until June 24. This painting is of a local doggy day care center.[/caption]

“Usually I have made drawings of animals because they move around quickly,” said Osborne. “I did recently do two paintings that are in the Woodmere show: one of a doggy day care center near my home and one of my daughter's dog, Midnight.”

In 2008, Elizabeth was honored with a career survey exhibition at the museum of PAFA organized by curator Robert Cozzolino, bringing together works from all periods of her career and accompanied by a major monograph publication. Osborne currently lives in Fairmount and is represented by the prestigious Locks Gallery. Her work is in numerous public collections including the Philadelphia Museum of Art, PAFA, the Reading Art Museum, the Delaware Art Museum, Woodmere Art Museum and the Palmer Museum of Art at Penn State U., among others.

Osborne's work is distinctive, but one thing that no other artist in the country may be able to claim is that Osborne once kept a studio in a former funeral home. “As a faculty member at the Academy for many years, I was given a studio,” she told us. “At one point, the Academy during renovations of the Peale House where I worked moved us into the Oliver H. Bair Funeral Home building until the renovations were completed. It was not my favorite studio as it was rather dark and gloomy,” which is ironic since her own canvases are drenched with bright colors.

A writer for the University of Pennsylvania Gazette magazine wrote about another of Osborne's former studios, this one in Old City: “Sun pours through four skylights, illuminating 20 years of spattered paint on the blue wooden floors, which her Cairn Terrier mutt, Jasper, romps across. The colorful stripes of the dog’s plush dumbbell toy echo a stunning motif that runs through many of her paintings — both wide and skinny bands of rainbow colors that seem to represent, in turns, book spines, paint cans — and the artist herself.”

A Locks Gallery spokesman has described Osborne as a gifted colorist who fluidly crosses the boundaries of representational, figurative and abstract art. Both her representational and abstract works are stunning. Does she feel more comfortable with one or the other? “I enjoy exploring both points of view,” she replied, “taking from them what pushes me forward. I tend to lean towards some imagery in my work rather than completely abstract. I like to combine the two often in my work.” 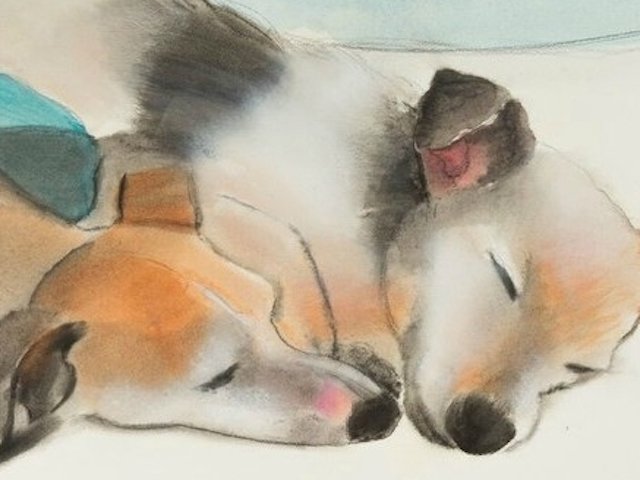 Osborne has also repeatedly been praised for her use of light and color. “I feel that light in painting, whether abstract or representational, is essential,” she said. “Without it, a painting is dead.” According to a publication of the Pennsylvania Academy of Fine Arts, “Unique among Philadelphia painters, Osborne used her rigorous PAFA training in concert with a life-long exploration of the meaning, metaphorical power and spiritual associations of light and color. Clearly composed and impeccably designed, Osborne's compositions integrate the intensely observed world through a study of minimalist and color field painting. The result is a body of work that ... challenges the viewer to rethink distinctions between these ways of seeing and depicting the world.”

Osborne admires many other artists, such as Piero de la Francesca, Cezanne, Gauguin, Matisse, Diebenkorn, Howard Hodgkin, Lucien Freud and David Hockney. Since she is 81, she admits that she does “not work as long hours as I have in the past.”

What is the best advice Osborne ever received? “Keep challenging yourself, set goals, never give up.” What is the hardest thing she has ever done? “Transitioning from realism to abstraction and back again was challenging.”

Elizabeth has a daughter, Audrey, 46, who also went to the University of Pennsylvania and is a ceramic artist.