Father Mark Plaushin, who was both a soldier and a chaplain in the U.S. Army, discusses those experiences in his office at Our Mother of Consolation Church. (Photo by Mike D’Onofrio)[/caption] By … 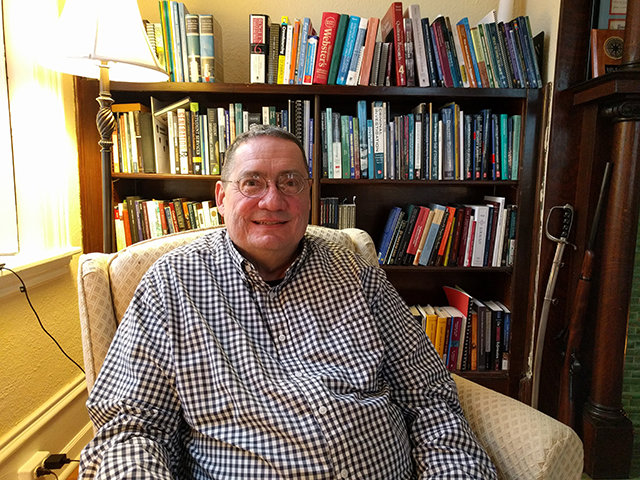 Father Mark Plaushin, who was both a soldier and a chaplain in the U.S. Army, discusses those experiences in his office at Our Mother of Consolation Church. (Photo by Mike D’Onofrio)[/caption]

Rev. Mark Plaushin has borne both bullets and Bibles for the U.S. military, although not at the same time.

On a recent afternoon, Father Mark, 62, sat in his office on the second floor of the rectory at Our Mother of Consolation, a Catholic church and school on East Chestnut Hill Avenue. (OMC opened to the community on  Nov. 11, 1855. Prior to that, Roman Catholics in Chestnut Hill and surrounding areas walked several miles to attend Mass at St. Vincent de Paul Parish in Germantown or St. Matthew’s Parish in Conshohocken.)

Father Mark served as an infantryman in the Army shortly after the end of the war in Vietnam and then went on to become a priest and Army chaplain. That position would bring him to desert villages in Iraq and Kuwait after the terror attacks of Sept. 11, 2001.

“I know what it is to hold a hand of a kid that is dying,” he said, speaking about his military experience. “I know what it’s like to be with young people when they’re dying, falling apart, having terrible issues, and that helps because some people in the congregation have kids who are also going through that.”

Father Mark has always been driven to help young people. After becoming a priest in 1989, the Pittsburgh native spent most of his time helping young people in Philadelphia and the suburbs, where, among other things, he taught in private schools.

The veteran/priest re-enlisted in the Army reserve as a chaplain in the early 1990s. During that time, he also founded and ran a nonprofit that recruited graduating college students to dedicate themselves to a year of service in Philadelphia.

“I was called to active duty immediately after that,” he said. “Once I got deployed to Iraq, you know, my life kind of changed in a million ways.”

Father Mark served multiple tours during the wars in the Middle East during a two-and-a-half-year period. While on active duty in Iraq and Kuwait, he was a cultural affairs officer (basically a chaplain) and was able to provide spiritual guidance to those in the armed forces, regardless of their religious affiliation.

He followed men and women into combat, but unlike his time as an infantryman, Plaushin did not carry a weapon. Instead, he was assigned a “body guard” who was armed.

While some religious leaders questioned the rectitude of the war and refused to serve as chaplains because of their anti-war beliefs, Plaushin said he felt compelled to serve, even though he also questions the morality of the wars.

“I looked at it like, yeah, but who is going to care for the soldiers? Who is going to be there when they need someone? Men and women who place themselves in harm’s way are particularly vulnerable to spiritual and emotional stress. They need ministers. They need people to look after them, to help shepherd them. I mean, I started off as one myself, as an Army infantry officer, and I have continued to have enthusiasm to work with them.”

Plaushin also served as a chaplain at the Walter Reed Army Medical Center in Washington, D.C. The daily scenes of young men and women scarred physically and emotionally from the wars and the attempts to help them and their families cope was more difficult, he said, than his time overseas in combat. “Every day seeing these young people who had been so savaged by war took a greater toll on me emotionally than being in the combat zone.”

Plaushin, who retired from the Army in 2015 as a colonel, has now turned his attention to a new crisis: opioids. Although he leads Mass and provides other services at Our Mother of Consolation, he is currently on sabbatical as he pursues a doctorate in public policy administration and emergency management.

Father Mark, who expects to finish his doctorate in the spring, is developing a survey to assess the prevalence of opioid use on Philadelphia college campuses. “It is the big epidemic, the thing that we need to get a handle on,” he said.

Father Mark said that after finishing his doctorate, he is eager to go to hard-hit areas where he can provide assistance, like the hurricane-ravaged areas of Texas and Puerto Rico.

Microscope inspiration for art based on life