Norwood seventh grader Lucia Smigiel (center) tries to get past Notre Dame’s Alessandra Cherian (left) and Morgan Carra. (Photo by Tom Utescher)[/caption] by Tom Utescher Back on Jan. 17, the … 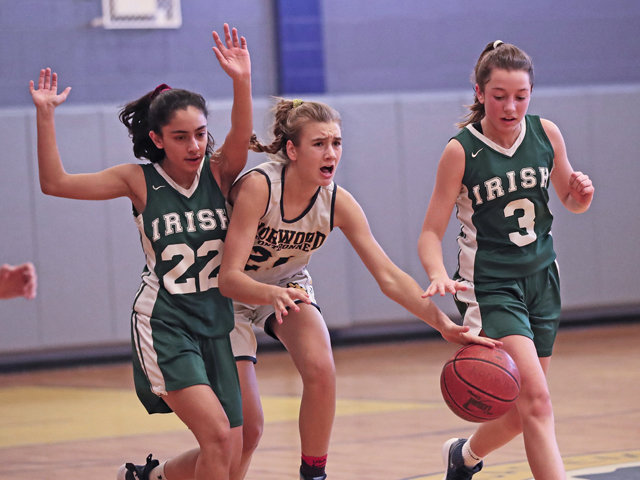 Back on Jan. 17, the varsity girls from Norwood Fontbonne Academy lost 36-24 to the Academy of Notre Dame, the defending basketball champions in the Girls Catholic Academies League. Prospects didn’t look good for the NFA Bears for last Monday’s rematch, especially since the Irish would have on hand a few good players who had missed the first game between the two teams.

The Norwood girls surprised even themselves by keeping pace with the visitors up to a 6-6 score in the second quarter, and then taking the lead and holding it for most of the rest of the game. With around a minute left in the fourth quarter, Notre Dame edged ahead, 19-18.

Bears eighth grader Devin Loome tied it up with a free throw, then with less than five seconds left Notre Dame’s Therese Trainer made a pair of foul shots to give the Irish a 21-19 victory.

Norwood, led by seven points from seventh-grade forward Lucia Smigiel and six from eighth-grade guard Ava Rossi, came away with a 4-5 record in the GCAL, while Notre Dame improved to 7-3.

Rossi started off the scoring on Monday with a layup in transition almost three minutes into the action. Later, a baseline jumper by eighth-grader Kayleigh Howard helped the home team finish the opening period in a 4-4 tie with the Irish, who got two jumpers from Mary Kate McGill.

Smigiel got going with a layup at the beginning of the second quarter, and added a free throw later on. This gave Norwood a 7-6 edge, and the lead would grow to 13-7 by halftime. Loome put in the rebound of her own shot, and then Rossi scored one layup on a drive and another on a steal and fast break.

The Bears could’ve had an even more substantial lead if they’d done a little better at the free throw line, where they shot one-for-eight over the first two quarters.

Notre Dame came out of the halftime huddle to score a field goal almost immediately, and solid defense by the Irish kept the Bears scoreless during the third quarter. Two more buckets by the visitors had them back within one point of NFA, 13-12, for the start of the fourth round. 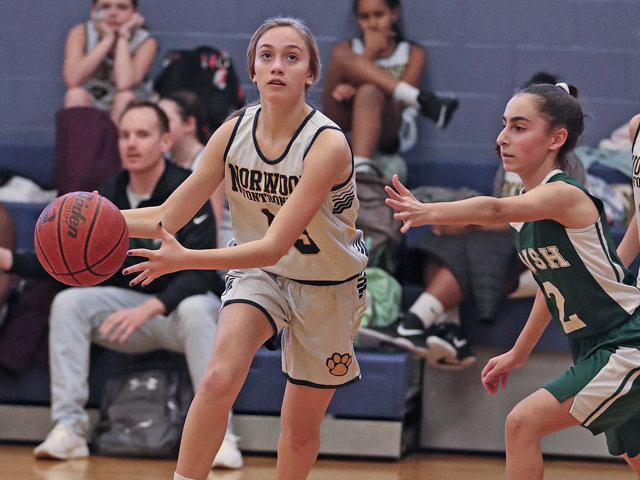 Ava Rossi (left), an eighth-grade guard for the Bears, penetrates toward the basket while guarded by Lindsay McBride of the Irish. (Photo by Tom Utescher)

The period got underway with opportunities for Norwood to widen the gap with free throws, but the Bears came up empty on two two-shot fouls and then a one-and-one.

However, from the open floor Loome scored on a baseline drive and then stole the ball back for the hosts. This led to a missed layup, but Smigiel was there to put in the rebound. Notre Dame called timeout with 2:36 left to play and Norwood leading 17-12.

After a Notre Dame timeout, Brooke Hippert scored off an offensive rebound, and then a Norwood timeout was followed by a steal by the Irish that led to a breakaway layup by Trainer. The visitors were now just one point behind, 17-16.

Maia Mocharnuk, an eighth-grader for the home team, hit the front end of a one-and-one to bump the Bears’ lead to two points with 1:46 left to play. Norwood missed a pair of free throws, and then Hippert made the second of two for Notre Dame.

On their inbounds play, the Bears turned the ball over, and with 1:02 on the clock a layup by Hippert moved Notre Dame in front, 19-18. The home team could not score at the other end, but as the visitors were coming back up on offense, NFA’s Smigiel tipped the ball away from an Irish player and Loome grabbed it.

Loome was fouled with 16 seconds left, and in a double-bonus trip to the line, she made the second of her two free throws to produce a 19-all tie.

On what looked to be the last possession for the Irish, the Bears’ Smigiel committed her fifth personal foul, sending Trainer to the line to make two free throws with 4.6 seconds left.

Norwood got the ball across halfcourt and Mocharnuk heaved it up at the basket. It actually hit the rim, but then bounced away, and the buzzer signaled a 21-19 Notre Dame victory.

After top scorers Smigiel and Rossi, Norwood had Loome score three points, Howard two and Mocharnuck one. Trainer turned in a game-high 10-point performance for the Irish, who also received five from Hippert, four from McGill and two from Kira Harrington.