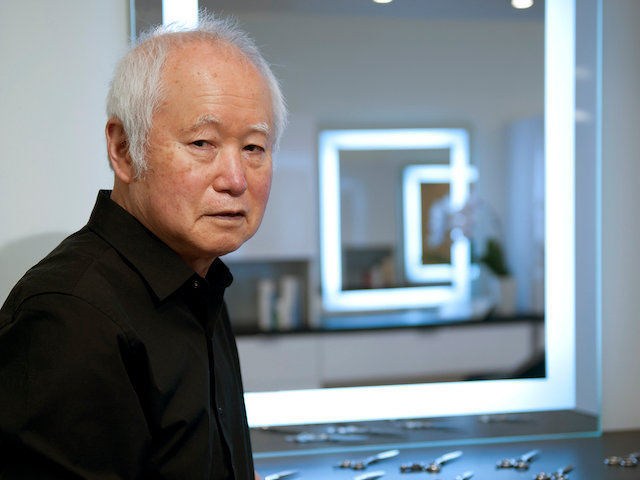 Ariumi never intended to open a salon in Chestnut Hill, but fate had other plans. He accidentally took a wrong turn while driving through the neighborhood one day and saw a For Rent sign at 8024 Germantown Ave. In an earlier interview with the Chestnut Hill Local article in 2018, Ariumi, who came to the United States by himself as a young man from Japan, said at the time he barely had $300 in his pocket.

Lower Gwynedd resident Maryam Lavasani, Ariumi’s business partner, said he decided to open the salon because “he trusted his hands” and “he trusted himself.”

In an earlier interview with the Local, he recalled how got a job sweeping floors in a hair salon where he was eventually trained to cut hair. As a young man, he cut hair at professional shows across Japan before deciding to move to America – “the land of opportunity.”

Lavasani, who is also an immigrant, said Ariumi is an extremely humble man and hard worker. In fact, he didn’t want much made of his retirement, leaving Lavasani to speak for him.

“Everybody loves him,” she said.

She recalled meeting him for the first time in 1989.

“I was still in beauty school,” Lavasani said. “He called the school to post a job for an assistant, and because I lived in Chestnut Hill, they called me into the office and said there is a salon around the corner from you that is looking for an assistant. It was a great opportunity. I just thought, I did not speak much English. And he asked me right away, if I could start working tomorrow, and I said ‘I have one more month of school left.’ He said, ‘Well, you can work on Saturdays after school. After school, you can work full-time.’ I started.”

Mt. Airy resident Kari Hart, a longtime client, said Ariumi has been doing her hair for more than 25 years.

“As a person, Norio is one of the kindest and most gracious people I know,” she said. “He pays such close attention to people sitting in and out of his chair. And he is just as kind and gracious to my hair as he is to me. There is an artistry to cutting hair. When I was sitting in his chair, I felt like I was being so carefully taken care of. He is such a lovely person, and he is so skilled at what he does.”

When Lavasani was asked if the salon was planning to throw a retirement party for Ariumi she said he is a shy man, who doesn’t like attention. She said, however, that, she was planning a small affair with a few longtime clients.

“Norio has a very big heart, but he doesn’t show his emotions,” she said. “I think that is part of his culture. I feel like he is such a big part of my life, and I don’t know how I am going to do it after 30 years. It’s going to be very emotional to say goodbye.”

She added that Ariumi doesn’t like to say goodbye.

“Even when he sees his customers and its their last appointment, he will say, ‘Well, we are not going to say goodbye. I am still going to be around Chestnut Hill. You are going to see me, and we will have lunch sometime,’” Lavasani said.

Lavasani, who is going to become the new owner of the salon, added that when she tells customers Ariumi is retiring many don’t believe it because he is a workaholic.

“In his job, you are on your feet all day,” she said. “Unfortunately, the day comes when your mind may work, but your body doesn’t work anymore.”

She added that he asked her to change the name of the salon because he doesn’t want to mislead people. So the Norio of Tokyo will become Maryam’s Salon.

Ariumi told the Local in an interview last year that he is often asked why he kept his business in Chestnut Hill.

He replied simply, “I am only here because of my clients. I have many very happy memories here.”