The Len Pierro Jazz Orchestra just released “The Third Quarter,” a CD of jazz standards like “Jitterbug Waltz” by Fats Waller and originals by Pierro. 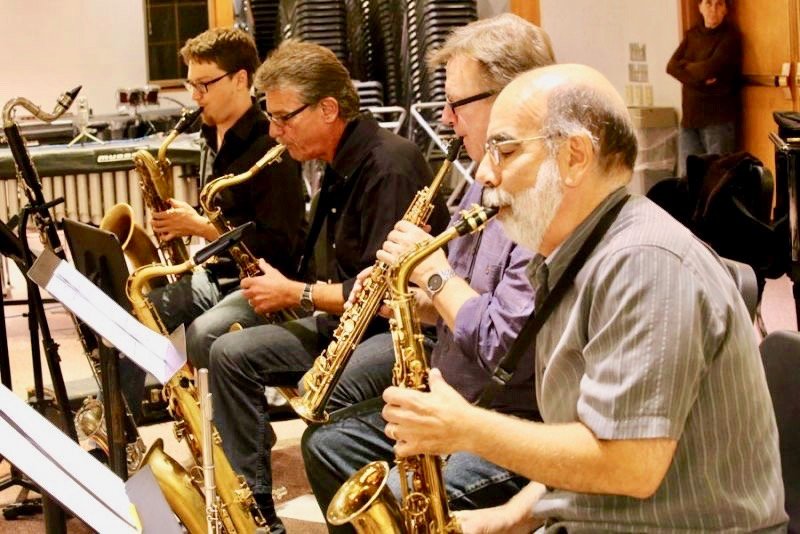 “Fish gotta swim, birds gotta fly, I gotta love one man till I die” are lyrics from “Can't Help Lovin' That Man of Mine,” from the classic Broadway musical, “Show Boat” (Jerome Kern and Oscar Hammerstein, 1927). If I may tinker with a classic, I would add the words “Musicians gotta make music, even in the face of a pandemic.”

One terrific jazz musician from Flourtown who certainly embodies this truism is Len Pierro, 63, who recently played his first show since the pandemic started at the Willow Valley Retirement Community in Lancaster with his wife of 31 years, singer Katie Eagleson. It was an hour-long jazz/cabaret show performed to an empty room with cameras rolling, and it will be shown on the retirement community's in-house TV at a later date. (Len and Katie have lived in Flourtown for 23 years and before that, seven years in Glenside.)

Pierro and his Len Pierro Jazz Orchestra also just released “The Third Quarter,” a CD of jazz standards like “Jitterbug Waltz” by Fats Waller and originals by Pierro, recorded at MorningStar Studios in East Norriton. The jazz orchestra features a virtual army of local musicians, including several local residents who have been profiled in the Local such as Larry McKenna (literally a local legend), Tom Lawton and Grant MacAvoy. Now I am definitely no jazz aficionado, but I do know great music when I hear it, and this CD sets the greatness bar very high.

According to Ron Kerber, a prominent local jazz saxophonist, “'The Third Quarter' is an autobiographical reflection of Len's musical life to this point ... Though his inspiration for this material is a look back at his artistic journey thus far, this is the work of the composer and arranger he is today at the top of his game … It is a marvelous milepost in his career as a composer, arranger and band leader.”

A native of Bristol, Bucks County, Pierro plays soprano, alto, tenor and baritone saxophones, piccolo, flute, alto flute, clarinet and bass clarinet. In 1983 he received a Bachelor of Music from Philadelphia College of the Performing Arts, and he studied improvisation, primarily with Brian Trainor.

Professionally he has played in a wide variety of combos including small jazz groups, big bands, commercial bands in clubs and at society parties, pit orchestras and recording sessions. He has had the opportunity to travel widely for gigs and is currently involved in projects such as a saxophone quartet and his own small jazz band, the Len Pierro Group.

In the mid-'80s, he met Eagleson while playing in a band together. A few years later they began working as a duo and in small ensembles at hotels and restaurants in the Philadelphia area, most notably a two-and-a-half year run at "Between Friends" restaurant at the Wyndham Hotel. They have also done numerous shows at social clubs, libraries, retirement communities, etc.

How did Pierro wind up in Philadelphia? “Most of the musicians I knew early in my career were either from Trenton or Philadelphia. Bristol, geographically, is located between the two cities. When Katie and I decided to get together, she was living in Mt. Airy, and we have stayed in this general area ever since.”

During the pandemic, Pierro's new CD will be distributed by CDBaby, a company designed for independent musicians.  “They no longer have a store, but their focus now is distribution,” said Lenny. “They provide distribution to all the digital sites like iTunes, Spotify, Pandora, etc. As far as press and airplay are concerned, since I do not have a publicist, I need to do it myself. There are resources out there to help, websites like All About Jazz, for example, that reach a targeted audience. My music is displayed there.”

Regarding Pierro's wife, although she studied music and voice at two colleges and privately, her real training began in the family station wagon. "My earliest memory is riding in the car with my mom, singing along with the radio, to a Patti Page song called 'Let Me Go, Lover,' except I was singing 'Ging Ging Go, Gover' because I was two years old," recalled Katie in an earlier interview. "My mother taught me and my sisters a lot of songs we could sing in harmony." Katie, the youngest of seven children, graduated from Ravenhill Academy in Germantown and then attended several colleges.

For more information, visit lenpierro.com. Len Lear can be reached at lenlear@chestnuthilllocal.com