Cheese Shop owners Dan Weiss (right) and his wife, Susan, help customers on the shop’s last day in business. (Photo by Pete Mazzaccaro)[/caption] by April Lisante They came by the dozens, some … 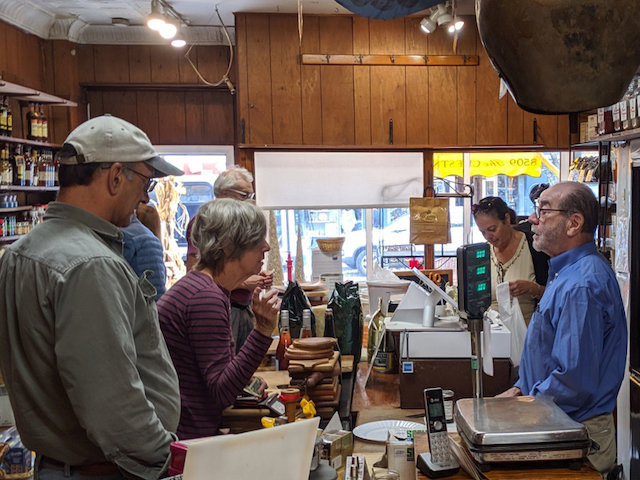 They came by the dozens, some toting celebratory bottles of wine and well wishes, others barely able to walk through the door before tears came to their eyes.

And from behind the counter, at the register one last time, Dan and Susan Weiss greeted them all.

Standing side by side amid a backdrop of empty shelving and anemic looking refrigerator cases, they were making the best of a difficult day – their last as proprietors of the Chestnut Hill Cheese Shop.

“We’re not saying goodbye,” Susan Weiss said, bagging cheese for a customer, while others queued up to purchase what little pasta, crackers and specialty foods were left on the shelves. “I’m not going to act like this is goodbye.”

But the tears flowed nonetheless. Customers shook their heads and hugged the couple. Owners of Hill businesses came in a steady stream to wish them well. Outside sat a multitude of cases of wizard-themed Butterbeer for sale, another sad reminder that the shop would not be here in two weeks for the Hill’s Witches and Wizards Festival.

The Weiss’ youngest daughter, Gabrielle, 22, who took a train from New York City where she lives, walked into the shop about an hour into the goodbye party and dissolved into tears as a customer hugged her.

“My sister and I grew up in this shop,” Weiss said, choking back her grief. “I remember my father picking us up to reach the Swiss cow bells. My parents stopped here when my mom was in labor with me on the way to the hospital to let everyone know. That’s just how it was here.”

This is what the end of an era looked like this past Friday, when the Chestnut Hill Cheese Shop, one of the Avenue’s oldest businesses, held an afternoon retirement party from 2 to 7 p.m. for owner Dan Weiss, 70. Last week, the shop closed its doors to the public forever, leaving many with a roil of emotions. Some damned online shopping, others lamented the precarious future of retail shops in general.

“I came here with my mother when I was just a boy,” said Hill resident Seth McDowell, as he bought cheese one last time on Friday with his young son. “It is sad and it’s also concerning. I wonder what retail is going to look like in Chestnut Hill.”

Weiss started the business at 8509 Germantown Ave. back in 1963 with his father, Joseph, who began a small grocery shop in Germantown in 1927 and moved up to the Hill in the 1960’s, where the shop boomed with business.

He carried coffees, cheeses and small grocery items. It was an instant hit. Dan Weiss took over in the late 1970’s and ran it seven days a week almost single-handedly with his wife, Susan, then later with his two daughters. He incidentally met Susan and married her shortly after she came into the shop as a food rep years ago. The girls, now 22 and 24, worked there throughout high school.

Ask anyone who shopped there in the 80s and even 90s, before Whole Foods and other specialty food stores had cropped up, and you’ll hear the same thing: it was one of a kind.

It was always known as the friendly neighborhood food shop, a place where Hill residents would order their holiday gift baskets, or stop off after work to grab the perfect cheese to pair with the perfect bottle of wine. But it was more than that. Susan’s recognizable, smiling face would greet customers on the sidewalk on a nice day, even before they set foot in the shop.

“I’ve been coming here for years to get my cheese for the holidays,” said Samantha Green, who works across the street at Mango clothing store. “She was always so wonderful, would come over and say hello. It was just a nice sense of community, even sisterhood, really.”

But within the past five years, Dan Weiss said the physical nature of the job began to take a toll on his already questionable health. His rheumatoid arthritis caused several autoimmune flareups, including bouts with staph infections.

“My physical strength was really diminished,” said Weiss. “I was working seven days a week, on my feet all day.”

He said he began to think about retirement in earnest five years ago, but kept plugging away at the shop. It was a recent three-week stint in the hospital with bout of pneumonia that finally gave him pause.

“I’ve got a lot of mixed feelings” he said, as customers made their way through the crowded store to hug him. “There’s a lot of nice people I’ve known for so many years. I’m sad about that.”

Now, he says, he’s contemplating what he’ll do during retirement. He says he might just have that shoulder surgery he’s been putting off for, oh, about a decade.

And he may work as a drug and alcohol counselor in a rehab facility. He’s been sober for more than three decades himself now. He’s not sure what he’ll do. But for the first time in a long time, he won’t be seeing his familiar, window-frame view of Germantown Avenue every day.

“Time marches on, you know?” he said. “One door shuts, and another door opens.”