Musical 'elephant in the room' at St. Paul's concert

Roxborough resident Oksana Maslova and newly named principal Zecheng Liang were among the standout performers in the Pennsylvania Ballet's performance of "Connection." (Photo by Alexander Iziliaev) …

Musical 'elephant in the room' at St. Paul's concert 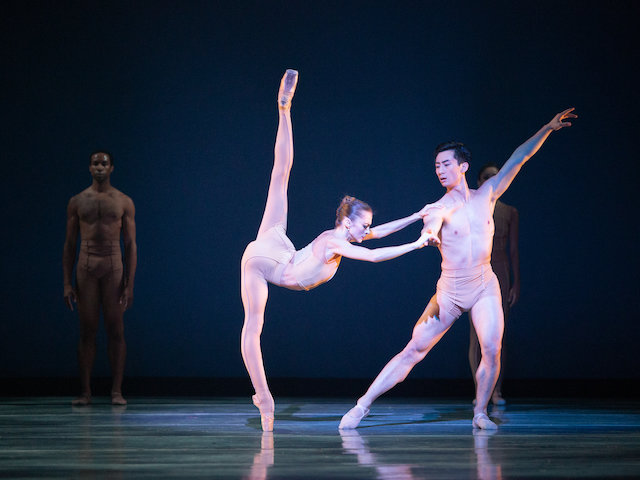 Roxborough resident Oksana Maslova and newly named principal Zecheng Liang were among the standout performers in the Pennsylvania Ballet's performance of "Connection." (Photo by Alexander Iziliaev)

St. Paul’s Episcopal Church, Chestnut Hill, hosted the second in its 2019-20 season of “Five Fridays: Concerts for the Community” Nov. 8. The featured musician was Artral Artists’ pianist Zhenni Li, who was heard in one of the most unusual programs of solo piano music I’ve encountered in many a season.

Li chose to perform the kind of roster of selections that was once quite common among concertizing pianists: a compilation of character pieces with only one major work among them. For Li, that substantial piece of music was Ludwig van Beethoven’s Sonata No. 23 in F minor, Opus 57, “Appassionata.” The rest of her program, however – and notwithstanding the basic attractiveness of all of the other pieces of music it included – were trifles that would have served better as encores than as parts of an actual recital program.

The sole exception to that observation was Lowell Liebermann’s 1989 four-movement suite, “Gargoyles.” Not only is it a substantial piece of music, it’s imaginative, evocative, humorous, technically demanding, distinctive, and thoroughly entertaining. Not surprisingly, Li gave it her finest reading of the evening. She played with a broad swathe of colors, a deep reservoir of dynamics, a scintillating palette of touches, and an interpretive sparkle that was mesmerizing.

Of the program’s other works, the most successful was heard at the opening: four excerpts from Sergei Bortkiewicz’s “Ein Roman,” Opus 35. Their point of interest, however, was not found so much in and of themselves as in what other composers they recalled.

The first sounded an awful lot like a solo piano version of a song or two by Irving Berlin, the second like a selection from Franz Liszt’s “Years of Pilgrimage,” the third like a combination of pieces by Gabriel Faure and Claude Debussy, and the fourth like it had come from the joint efforts of Sergei Rachmaninoff and Alexander Scriabin. Li played all four quite well, but they came and went leaving nary a lasting impression because all four lack even a hint of a distinct personality from their composer.

And now let’s discuss the “elephant in the room” – the piano on which Li was asked to perform. It’s time to be honest about the “vintage” Steinway & Sons grand piano that was “restored” several years ago and that is now simply beyond the pale of resurrection. The action of its keys is slow and unresponsive and its tone couldn’t be muddier than it is under the fingers of any and every pianist I’ve encountered playing it than if it were being heard beneath 20 woolen blankets in a space surrounded by heavy velvet curtains in a room two separate buildings away.

If St. Paul’s Church wants this series to attract topnotch pianists then it’s going to have to bite the bullet and purchase a Steinway concert grand piano, the universal standard for professional instruments. And surely the parish will find many other uses for such a splendid piano.

“Five Fridays” deserves nothing less. Its mission of raising funds for Face-to-Face Germantown and Philadelphia Interfaith Hospitality Network – two charities striving to help the homeless and unemployed – is one our society desperately needs. With politics as slow as molasses in Harrisburg and gripped by deadlock in Washington, the burden of helping the helpless has to fall closer to home. Friday evening’s concert was sufficiently sponsored by local business so that all the money raised by ticket sales has gone directly to both charities. That kind of success forms a model for how to get it done.

Pennsylvania Ballet continued its 2019-20 season this past weekend with a series of three world premieres performed in the Merriam Theater. Of the three, one was a boring bust, one was interesting, and one was a stunning success. In my book, that’s not a bad record, at all.

Saturday evening’s triumph was “Connection.” With choreography by Juliano Nunes to music by Ezio Bosso, it lives up to its name. All sorts of solos, pairings, threesomes, foursomes and larger groupings slide across the stage through intimate gestures and broad movements that express the universal need for connections between one and all of us. For all its sense of contemporary innovation, “Connection” resides securely within the traditions of romantic ballet in that its character is personal and expressive.

“Reverberation,” with choreography by Garrett Smith to music of J.S. Bach recomposed by Peter Gregson, focuses on the cello and some of Bach’s loveliest music composed for it. Much of it works fairly well, but it runs on far beyond its point of interest. Even the fine dancing of everyone onstage couldn’t save it from tedium.

As for the program’s opening work, “Trace of Inevitability,” the less said the better. With choreography by Yin Yue to music by Michael Banabila,” its finest moment was the second after it ended.

Thank goodness for the Christmas season. Pennsylvania Ballet will present “The Nutcracker” Dec. 6-31 in the Academy of Music. With choreography by George Balanchine to Peter Ilych Tchaikovsky’s immortal score, it remains the most popular work in classical ballet’s repertoire. Visit PABallet.org for ticket information.

The Williamson Voices of Westminster Choir College, Princeton, New Jersey, will take part in an ecumenical service Sunday, Nov. 17, from 3 to 4 p.m., at the Cathedral Basilica of Saints Peter & Paul, located at 18th St. and the Benjamin Franklin Parkway in Philadelphia. Free parking is available.