Mt. Airy sculptor, 90: her work is 'celebratory of life'

Henrietta is seen in the Roxborough home of a friend and collector of her sculptures. On the wall behind Heni are paintings by her husband, Reinhold. (Photos by Len Lear) by Len Lear Henrietta …

Mt. Airy sculptor, 90: her work is 'celebratory of life' 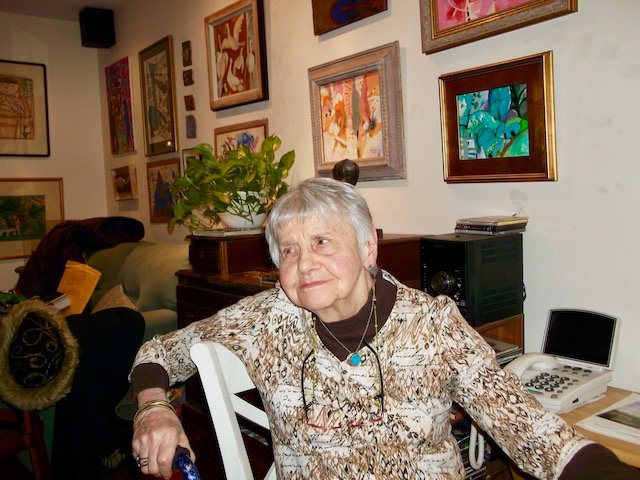 Henrietta is seen in the Roxborough home of a friend and collector of her sculptures. On the wall behind Heni are paintings by her husband, Reinhold. (Photos by Len Lear)

Henrietta “Heni” Edelschein may be 90 years old, but the acclaimed sculptor, poet, human rights activist and violinist who lived with her husband, Reinhold (“Rein”), on Sedgwick Street in West Mt. Airy for 54 years before moving to the Phoebe Nursing Home in Wyncote in 2014 with Reinhold, is just as feisty and opinionated as ever.

“I wanted to express myself in clay,” she said last week in the Roxborough home of Alice Farber, retired art teacher and collector of Heni's sculptures and Rein's paintings. “My ceramics teacher at Tyler (School of Art), Rudolph Staffel, was looked down on because he 'only did ceramics,' but he was great. Clay is so common, but it has served humanity. It has paved roads with bricks. It has held food. It is not respected like bronze, but some of the most celebrated Italian sculptors who did bronze also worked in clay. It is the most human of all materials, and my work is celebratory of life.

“Clay is so impressionable. It's so soft when you work with it. It's so hard when it's fired. And clay is more forgiving than any other medium. If you make a mistake, you can press it away and take it in a different direction. Or it may seem like a mistake, but maybe the clay has a life of its own … I am a 'reacher.' I reach to the sky. I would rather give my work away. The money is not what counts. I don't like that this country makes a god of money.”

According to Farber, a passionate advocate for children's art who was able to get her students' art exhibited at Woodmere when she was teaching, “I have been all over the world looking at art, and I can tell you that the Edelscheins' art is magnificent. When I die, I would like to leave Heni's work someplace where people can appreciate it for years. Heni is not just just a good sculptor. So much of what is in the art world today is ugly and grotesque, but Heni's work is truly great! Woodmere should keep and show this work.”

Heni said of Reinhold's work, “He painted nature. He has such a wonderful color sense. His imagination was on fire! We both love birds. He would paint them, and I would sculpt them. He played the violin every day for two hours – Beethoven, Mozart, Brahms, etc. – to keep his fingers working. He even took his violin to Europe. We loved traveling. I'm still in contact with some of the friends we met while traveling in Europe.

“I'm not inhibited in any way. No one is a stranger, just someone I haven't met yet. I talk to everyone. In Mt. Airy, if people were walking with dogs or little children, I'd stop and talk to them. We love animals and nature. Our B & B gave us the money to travel.” (The couple used their house in Mt. Airy as a bed-and-breakfast for out-of-town visitors for 30 years.) 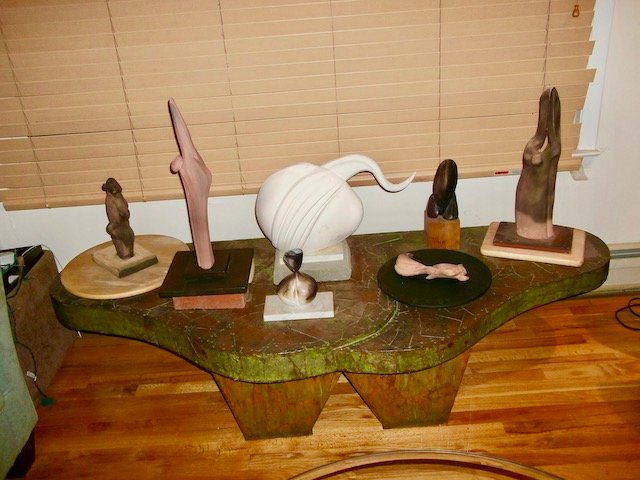 Reinhold, 94, was unable to participate in this interview because he suffers from aphasia, a brain condition that robs one of the ability to communicate, but he told us in a 2009 interview, "I spotted Heni in the registration line at Tyler, and I said to myself: 'That's the woman for me.'" On their first date, he took her to a photography exhibition of Frank Lloyd Wright's work at Gimbel's Department Store, and when she said she loved it, "I knew I'd made the right choice."

Both Edelscheins belonged to the prestigious Plastic Club, and Rein also belonged to the Philadelphia Sketch Club. They had joint exhibitions at Allens Lane Art Center and are in permanent collections of Woodmere and the Atwater Kent Museum, as well as in numerous private collections. Rein received many awards such as the Violet Oakley Prize (2006), the Hugh and Marian Scott Prize (2005) and the Elizabeth Coyne Memorial Prize (2000) at Woodmere exhibitions.

Rein grew up in Logan and Heni in North Philly. After art school, the two lived in Levittown for a few years, where Heni became an activist to help Daisy Myers, the first African American resident of Levittown and the victim of vicious racist acts. Subsequently, the Edelscheins returned to Philadelphia and moved to Mt. Airy for cultural stimulation. “There's nothing like Mt. Airy,” said Heni. “It is a wonderful neighborhood. We lived a very rich cultural life in Mt. Airy.”

Henrietta was also a violinist as well as a prolific poet, observing nature in words as precise as her sculpture. One line reads: "After a snowfall, snow-white clusters blown on bushes that never flowered before." So complete was their artistic collaboration, Reinhold typed up Heni's poems.

The Edelscheins have two sons — Richard, 58, an art teacher, and Todd, 60, a horticulturist. You can reach Len Lear at lenlear@chestnuthilllocal.com

The Sculpture Gallery: Fringe at the Circus Campus

Mt. Airy classes for older folks are a real stretch