Mt. Airy scientist to speak at SCH on conservation crisis 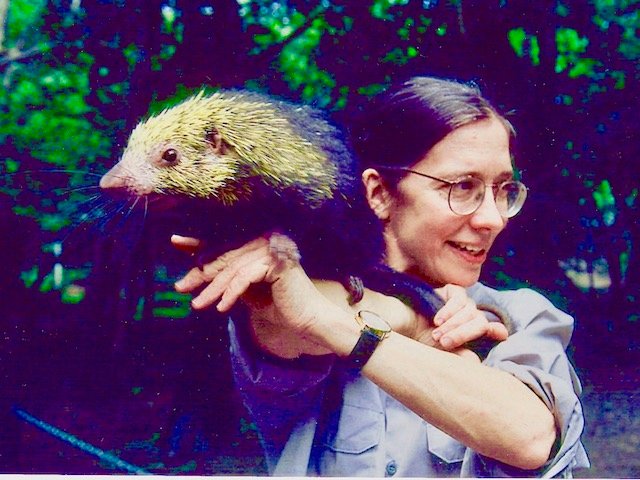 Dr. Winnie Hallwachs, tropical biodiversity scientist and Mt. Airy resident, will be giving a free public lecture on species biodiversity at Springside Chestnut Hill Academy on Saturday, Dec. 7 at 4 p.m. The friend she is holding is enjoying the winter back in Costa Rica.

It’s a struggle to hold on to optimism, but it’s crucial,” insists Dr. Winnie Hallwachs, tropical biodiversity scientist and long-time Mt. Airy resident who wishes that the biodiversity crisis would be given equal weight to the climate crisis. “What I know for certain is that the natural world needs protection and action, including but going well beyond climate change. Like many other people, I look with wonder and hope at the Parkland students and the team they built up and at Greta Thunberg and her clarity. Anyone can play a role, and roles add up to a critical mass.”

Hallwachs, 65, who earned a B.A. from Princeton University in 1976 in biochemistry and Ph.D. from Cornell University in 1994 in ecology, has lived in Mt. Airy for 50 years, but for the last 40 years she has lived in Costa Rica more than half of every year doing biodiversity research. She is responsible for 391 research works with 6,882 academic citations, and she will be giving a free public lecture titled “A Porcupine, Moth Legs and a Drive to Conserve What is Slipping Away” at Springside Chestnut Hill Academy on Saturday, Dec. 7 at 4 p.m.

Over the last four decades, Hallwachs and Daniel Janzen, 80, her husband and scientific partner at the University of Pennsylvania, have worked on tropical forest restoration and on the conservation of the biodiversity of Área de Conservación Guanacaste, in northwestern Costa Rica. A UNESCO Natural World Heritage Site, its 420,000 acres contain over 650,000 species (2.6% of total global biodiversity) and are home to wild parrots, peccaries, boas, ocelots, migrant birds from North and South America and many, many insects.

Janzen is a professor of conservation biology in the Penn biology department, and Hallwachs is a biodiversity conservation research biologist. He has been at Penn since 1976 and she since 1978.

Since 2004, Hallwachs, Janzen and their collaborators have identified thousands of new species among the more than 43,000 ACG species sequenced to date. In 1997, Hallwachs co-founded the Guanacaste Dry Forest Conservation Fund, a nonprofit organization whose mission is to promote “the long-term survival of ecosystems and biodiversity of ACG through conservation, education, science-based management and biodiversity development.”

Hallwachs told us last week that her interest in biodiversity “started with a fascination with animals and fresh water when I was young, but it only became an active part of my life in the mid 1980s, from recognizing the real danger that the Costa Rican dry forest area where I lived was facing. One of these dangers was human-set fires, but the biggest threat came from the general public feeling that parks were setaside lands with no clear importance, no value to them and no owner to defend them.”

Regarding the hot-button issue of climate change, Hallwachs insisted, “It is real. It is tremendously damaging to everything and to people in all walks of life and all economic levels. In the park where I work and live, the signs were somewhat deniable in the 1980s, worrisome in the 1990s, and it was in the year 2000 that I first heard someone will global knowledge, the director of science at The Nature Conservancy, say that biologists all over the world were reporting that their sites and research were affected by climate change

“From the biological signs all around me, the change has accelerated each decade since. We need to take action now.”

Hallwachs’ family moved from a small town in upstate New York to Philadelphia in 1967, when she was 13.

“I have vivid memories of our first short visit.” she said. It was late May, and all the azaleas were in bloom, the sun was shining, and it was so alive and colorful and lush compared to upstate New York in late spring. But the first hot and humid Philadelphia summer was a bit of a shock!”

Regarding life in Mt. Airy, however, “We really lucked out with wonderful neighbors on our block on Carpenter Lane. When we moved here, the history of West Mt. Airy Neighbors pulling together to confront white flight, panic selling and redlining was recent and vivid. Looking back now, I think I absorbed a feeling of hope and possibility about what can happen when people come together around a mission.”

Not too many other people I have ever interviewed (in fact, none) have had insects named after them, but at least eight insect species have been named after Hallwachs and Janzen.

“Usually I know the taxonomists who chose the name,” she pointed out, “and often what matters most is the friendship or intention of that person, or whether the insect lives in one of my favorite places, or who collected the first specimen found. Dan feels that there are already plenty of species named after him, and he would rather the honor go to other people who are also doing very good things.”

Visit SCH.org for more information about the Dec. 7 talk. Len Lear can be reached at lenlear@chestnuthilllocal.com