Mt. Airy food truck operator getting back in gear

Nobody goes into the U.S. military expecting to dine on gourmet food, but Nathan Baynes was probably a bit more disappointed than most.

Mt. Airy food truck operator getting back in gear 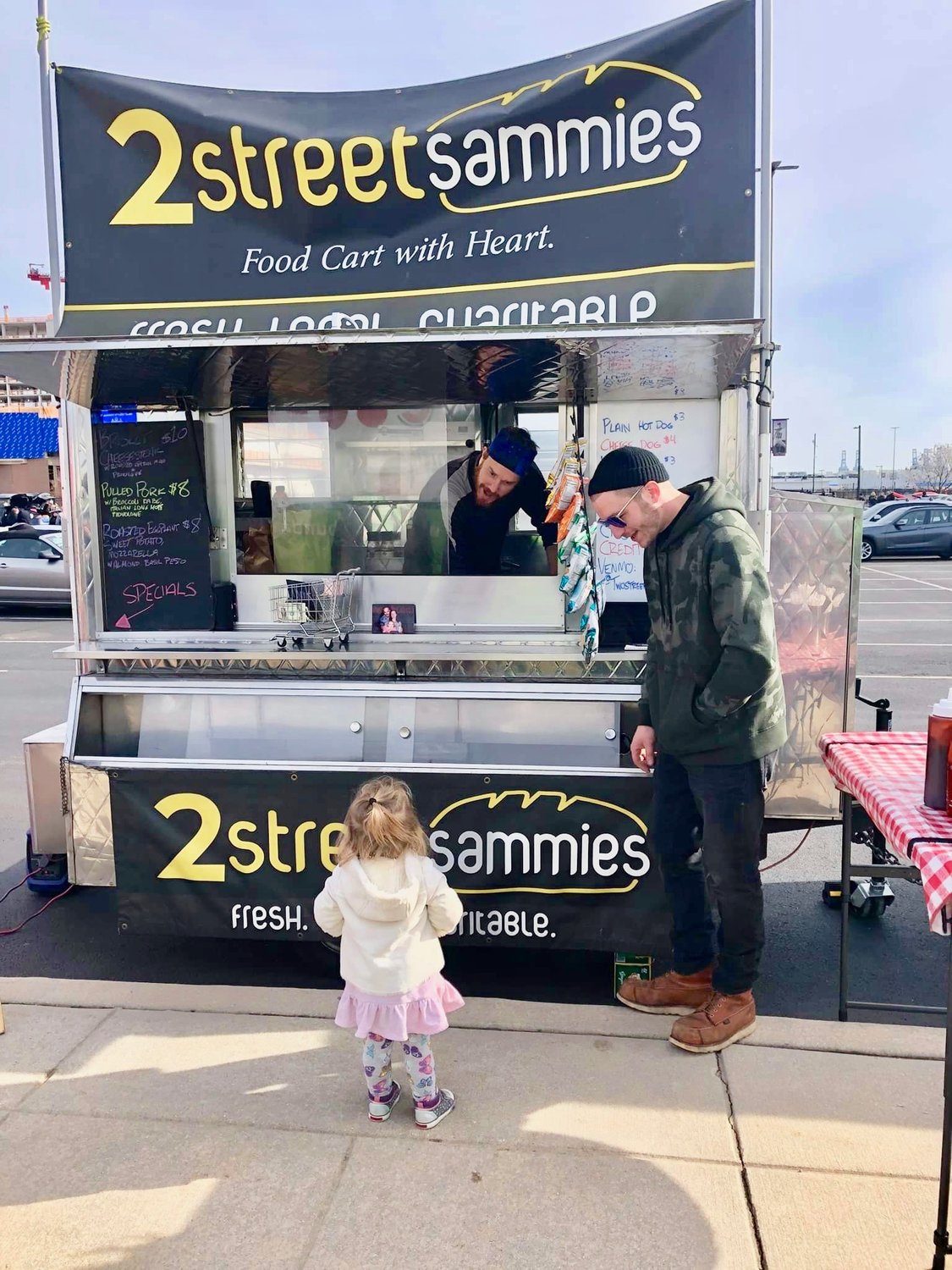 Mt. Airy resident Nathan Baynes, whose commercial kitchen is also in Mt. Airy, is the owner of 2 Street Sammies, a food truck operation that visits various locations in the Philly area, including Weavers Way Co-op in Mt. Airy on Thursdays and Saturdays, 11:30 a.m. to 3:30 p.m.
Posted Friday, April 23, 2021 10:30 am
by Len Lear

Nobody goes into the U.S. military expecting to dine on gourmet food, but Nathan Baynes was probably a bit more disappointed than most. Baynes, 44, a Mt. Airy resident, grew up in Lower Bucks County and went to Temple University, majoring in elementary education. He signed up for the Pennsylvania National Guard to help pay for tuition, but then 9/11 happened, and many reservists were called up to active duty, including Baynes, who had to leave college.

Baynes wound up serving in the U.S. Air Force in Iraq, Kuwait and Afghanistan. “I was never in a gunfight,” he said. “The air raid siren went off a few times, and there were a few sketchy and scary times, but I was never in combat.”

After eight years in the military, Baynes no longer was interested in a teaching career, although he was 20 credits shy of a degree at Temple. Instead, Baynes began a career in the restaurant industry. “One of my biggest inspirations was the bad food (in the military),” he said. “It made me want to turn out good food.”

Baynes got a job with Pete McAndrews, one of the hottest young chef/restaurateurs in the city at the time. He owned Modo Mio, an Italian BYOB at 2nd and Girard on the edge of Northern Liberties (and Paul Roller's favorite restaurant), and Monsu, an Italian BYOB at 9th and Christian Streets in the Italian Market. Both are now defunct.

Baynes started as a server in 2008 but wound up as a managing partner at Paesano's, McAndrews' sandwich shop in Fishtown, which got spectacular reviews but also went the way of all flesh. In late 2016 Baynes went out on his own and launched 2 Street Sammies, a food truck operation stationed at 2nd and Morris Streets in South Philly that also did small catering jobs and special one-time events.

The reviews on yelp.com, the nation's leading review website for restaurants and other food businesses, are almost all five stars, the highest rating, for 2 Street Sammies. For example, Mike B. wrote in January of this year: “We've been loyal followers of 2 Street Sammies for quite some time! The new 'deliver' menu has been awesome! Love the sweet potato lasagna! Nate is the best!”

Beth M. wrote: “The brisket is DELICIOUS!! I recently had Sammie's food at a catered birthday party, and everything was fantastic. In addition to being a great chef, Nate is also dedicated to helping the Philly community. There was a huge amount of perfectly good food left on the buffet at the end of the party. Instead of letting it go to waste, Nate contacted a group who picked up the food to donate to the homeless. He also attends charity events with the truck.”

A.K. wrote: “Such yummy food! Have had it both catered and have visited the truck on a few occasions throughout the city. Not only great food, but Nate is super-friendly!”

“It takes three years to establish a name and reputation in this business,” said Baynes, “but when we hit the three-year mark was when the pandemic began. I was completely shut down from March to September of last year. I am lucky that I had the love and support of my wife the entire time.”

In 2019 Baynes and his wife, Stephanie, a graduate of both Springside School (until the eighth grade) and Central High School, moved to Mt. Airy from South Philadelphia. Stephanie, a marketing director for a non-profit organization, had lots of former school friends in this area, “and it is a beautiful area,” said Nathan, who prepares his food in a converted rowhouse on Mt. Airy Avenue. The Baynes live nearby with daughter, Zoey, 3.

When Covid restrictions eased somewhat, Baynes began delivering complete meal plans to homes in Mt. Airy, Chestnut Hill, Roxborough and the adjacent suburbs that would feed an entire family for several days. “We were going strong with the home delivery meal plans until recently,” said Baynes, “but now that the weather has gotten warmer, more people are eating outside of their homes.”

Baynes hopes to get commitments from breweries in the area that do not have kitchens to partner with 2 Street Sammies for food service. His truck also shows up regularly on Thursdays and Saturdays, 11:30 a.m. to 3:30 p.m., outside Weavers Way Co-op, 559 Carpenter Lane in West Mt. Airy.

For more information, visit twostreetsammies.com or call 215-900-0595. Len Lear can be reached at lenlear@chestnuthilllocal.com.

Microscope inspiration for art based on life