Teammates and friends celebrate with Mount junior Grace Niekelski (standing, #22) after she scored her 1000th point in a big league win over Gwynedd Mercy. by Tom Utescher With more games on the … 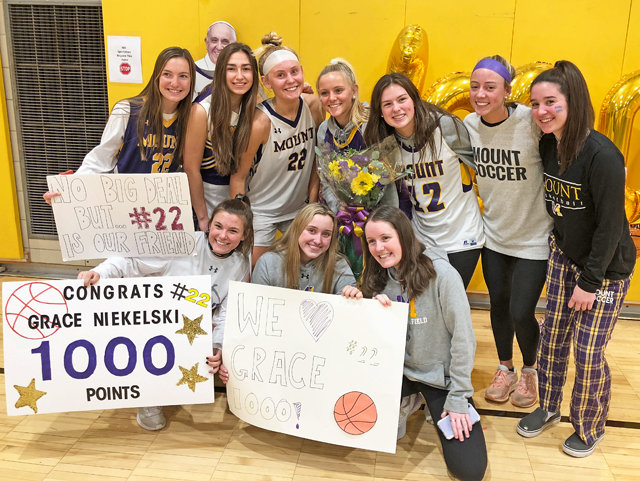 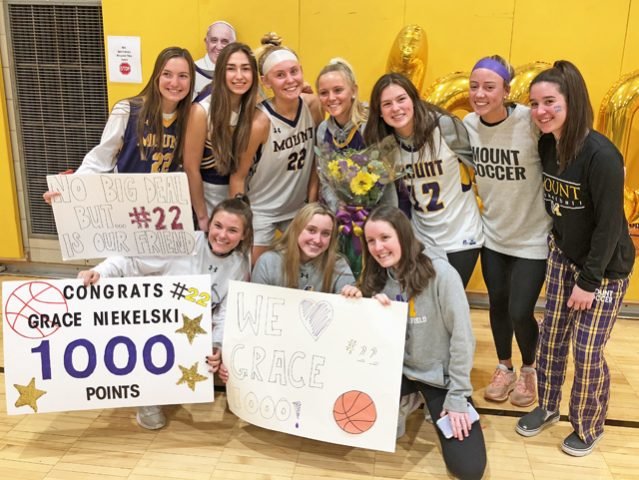 Teammates and friends celebrate with Mount junior Grace Niekelski (standing, #22) after she scored her 1000th point in a big league win over Gwynedd Mercy.

With more games on the typical high school basketball schedule than in days of old and with the introduction of the three-point field goal, it's no longer uncommon to see talented players reach the 1000-point mark in career scoring.

What is unusual is to see one do it midway through their junior season.

It wasn't an accident that the milestone was reached on the Mount's home court. Two games earlier, Niekelski had deliberately curtailed her scoring in an easy win over Merion Mercy Academy. That allowed her to unleash an 18-point performance on January 26 against a challenging non-league opponent, Cardinal O'Hara. After that close loss (56-51), the junior was just eight points away from 1000 points and was set to reach the magic number back home at the Mount in the AACA clash with Gwynedd.

Early in the game, she related, "It was on my mind, but I didn't want to rush anything just to get 1000. Audrey was doing amazing, so why not just get her the ball."

Niekelski was speaking of teammate Audrey Bryce, a senior forward. At the end, they would share the team high of 15 points, while Gwynedd junior guard Kaylee Griffin led all scorers with 21.

A packed house of mostly home fans was champing at the bit to see the MSJ standout collect her 1000th point, but the crowd would have to wait until after halftime.

Niekelski, on the other hand, commented, "I knew it wasn't all about me, because that's not how you win. I knew it would come, and I didn't care that it happened in the second half."

When she went to the foul line early in the third quarter, she revealed, "I was counting in my head, so I knew I needed one more."

The event came a little earlier in her high school career than some would have predicted, but it had been clear for some time that she would pass the 1000-point mark before leaving the Mount. Earning a starting spot as a freshman, she scored 30 points in a PIAA District 1 playoff game near the end of that season.

As the team has adapted to new head coach Matt Feeney, Niekelski has noted steady improvement in the squad and has hopes for a deep playoff run.

"We're always working on our defense, because defense leads to offense," she said. "We're friends on and off the court, so that helps us as a team. We keep improving in practice and learning to make the most of our advantages, like our athleticism. Everyone is starting to really work well together and I think we can make it pretty far."

Individually, she routinely works with the Mount coaches after practice to refine her shooting.

"I'm always looking to become an all-around inside and outside scoring threat," she said.

Outside of school, she's played AAU basketball with the Comets organization for many years. A strong student (her sister Maddie is a freshman at Notre Dame), she's being courted by colleges in the Ivy League, the Patriot League, and other conferences.

Niekelski enjoys a wide range of academic subjects, but when pressed to pick a favorite, she responded "I'd say English."

She's starting to winnow down her list of college options, although she's not going to make a decision for awhile yet.

"I haven't made up my mind, so I'm definitely going to wait a little longer until the start of AAU," she remarked.

Her four fellow starters for Mount St. Joe's (Bryce, Kelly Rothenberg, Taylor Sistrunk, and Lauren Vesey) are all seniors on their last go-round with the Magic, so for now the school's newest 1000-point scorer just wants to make this season last as long as possible.