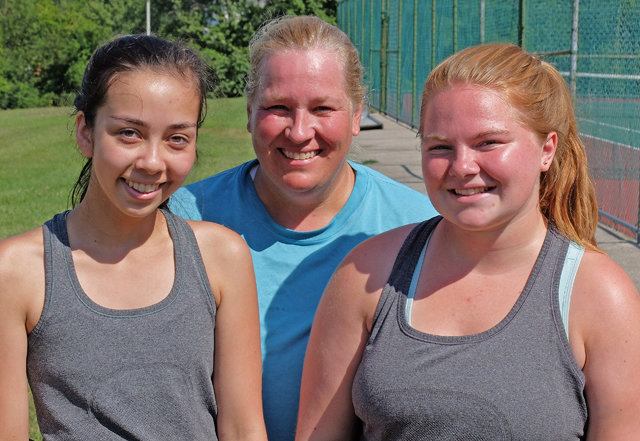 After graduating a pack of eight seniors from last year’s varsity tennis squad, Mount St. Joseph Academy was still able to start out the 2015 season with a 5-0 victory at Villa Maria on August 24.

The arrival of some talented young players helped make that possible, and there’s another new face on the MSJ racquet scene, as well.

Longtime mentor Ron Mutchnik stepped down after a successful 10-year run with the Magic, and the reins have been handed to Joy Grafenstine. She was a former Catholic Academies player herself, competing for Nazareth Academy before going on to play at Ursinus College.

A few years ago, she was the head coach for two seasons at another league school, St. Basil, in addition to her involvement in club tennis as a player and instructor. Grafenstine also coached field hockey and lacrosse at Wyncote’s Ancillae Assumpta Academy, and through her brother, Brian Stefanowicz, she has four nieces who are either former or current athletes at Mount St. Joe.

The lone senior who is back from last year’s squad is Sophia Gardell, who was a JV doubles player in 2014. She’ll be a team co-captain this fall along with current junior Katie O’Sullivan, who played first JV doubles last season with her classmate Ali Nowak.

Together again, O’Sullivan and Nowak won at first varsity doubles in the season opener, prevailing against their Villa Maria rivals in three sets. At second doubles, junior Meredith Fink and sophomore Maddie Walsh won in straight sets over their Hurricane counterparts. Julianne Dishler, a member of the varsity line-up last season, is back as a junior to play second singles, and she won her opening match 6-1, 6-3.

The first and third singles players for the Magic are freshmen who are both younger sisters of seniors from last year’s team. New arrival Stow Weiss follows her elder sibling Morgan Weiss, a former number one. Taking over the top spot, Stow breezed through her high school debut, 6-0, 6-0.

Emily Christine, a 2015 grad, is having her family legacy carried on by younger sister Elizabeth, who easily captured a win in her third singles match at Villa, 6-0, 6-1.