Mount St. Joseph Magic captured the team title for the second year in a row. 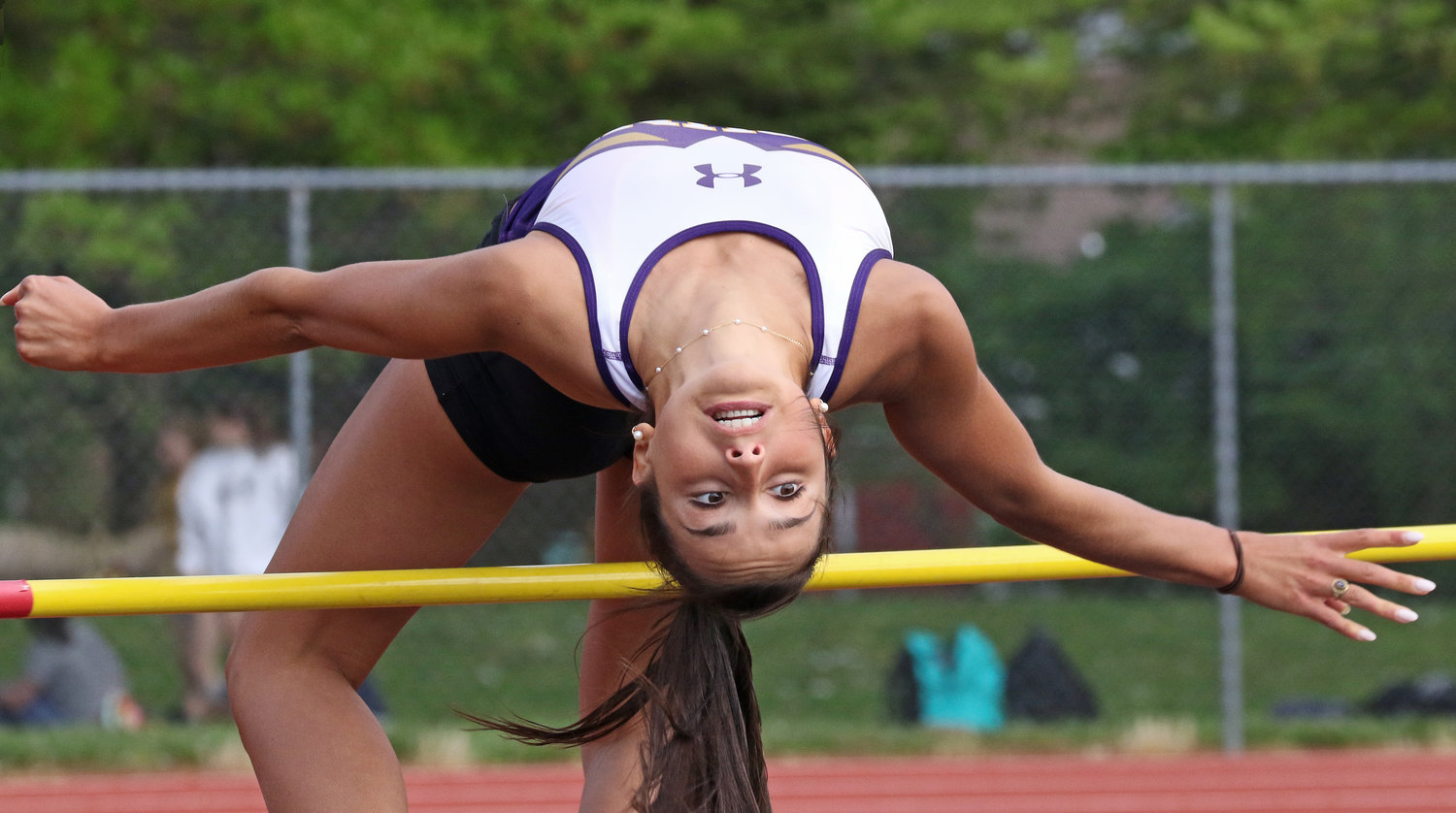 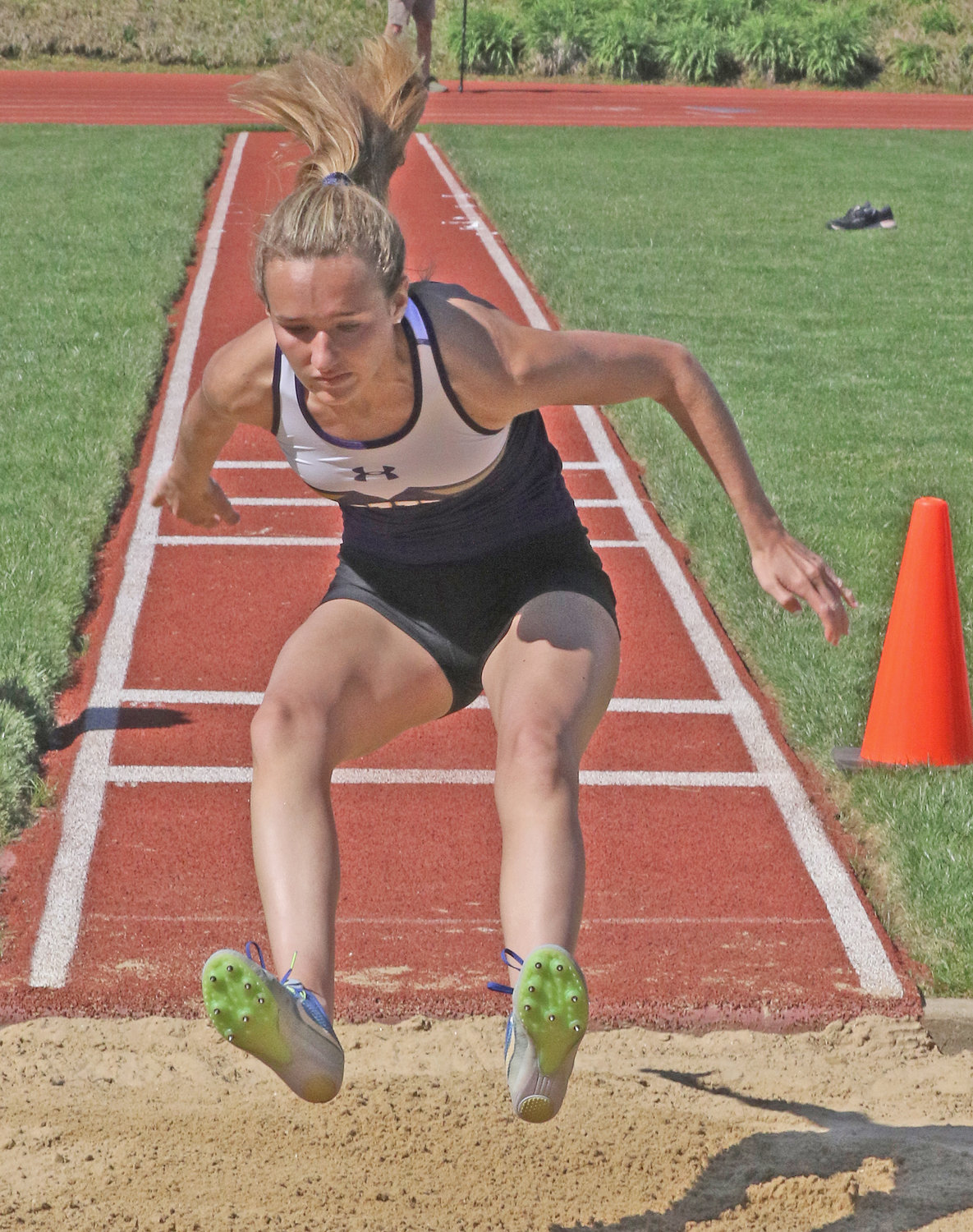 On her descent, Magic junior Katie Donahue focuses on her landing in the long jump pit.  Photo by Tom Utescher 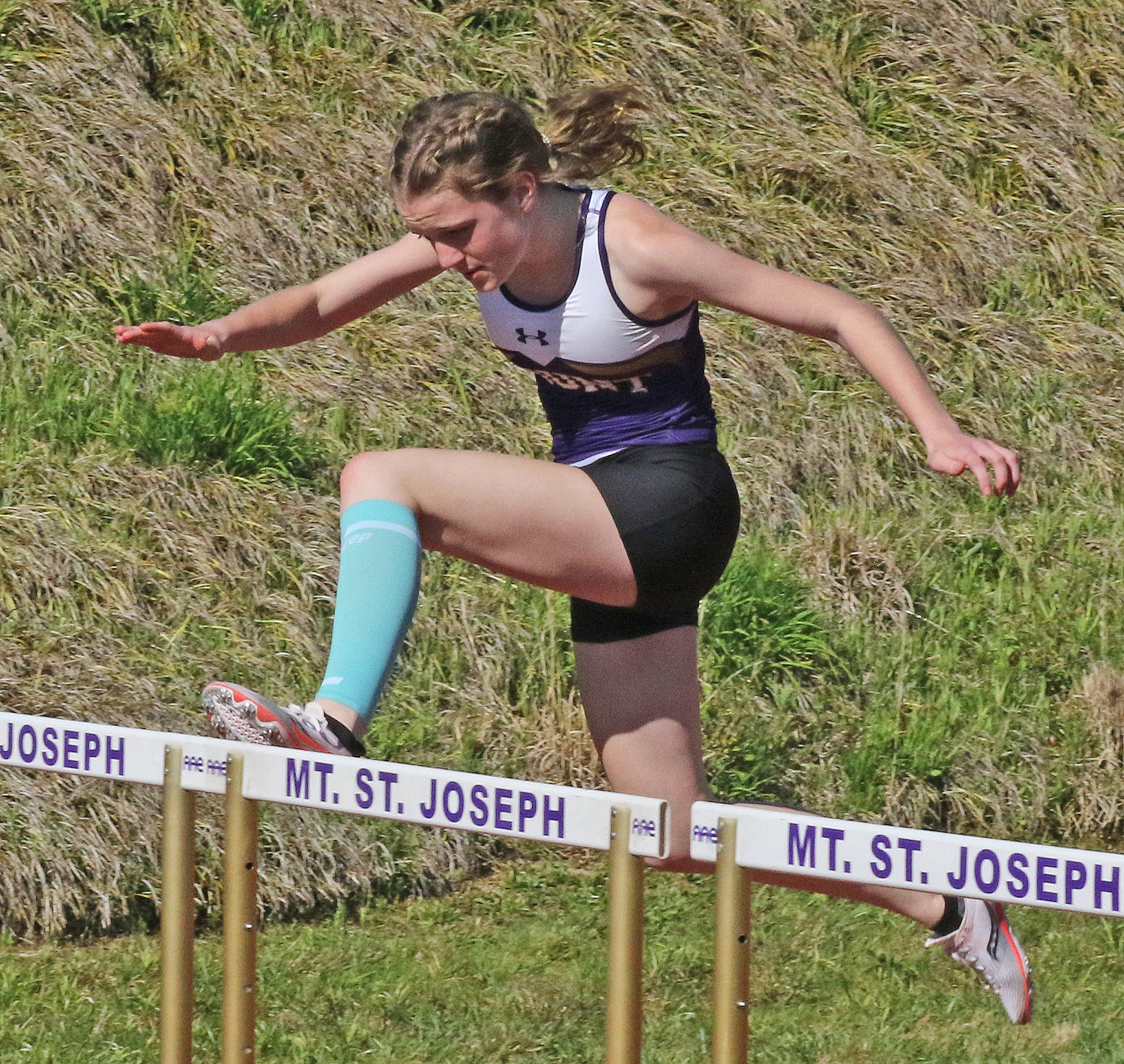 Sophomore Constance Huber heads toward a third-place finish in the 100-meter hurdles.  Photo by Tom Utescher 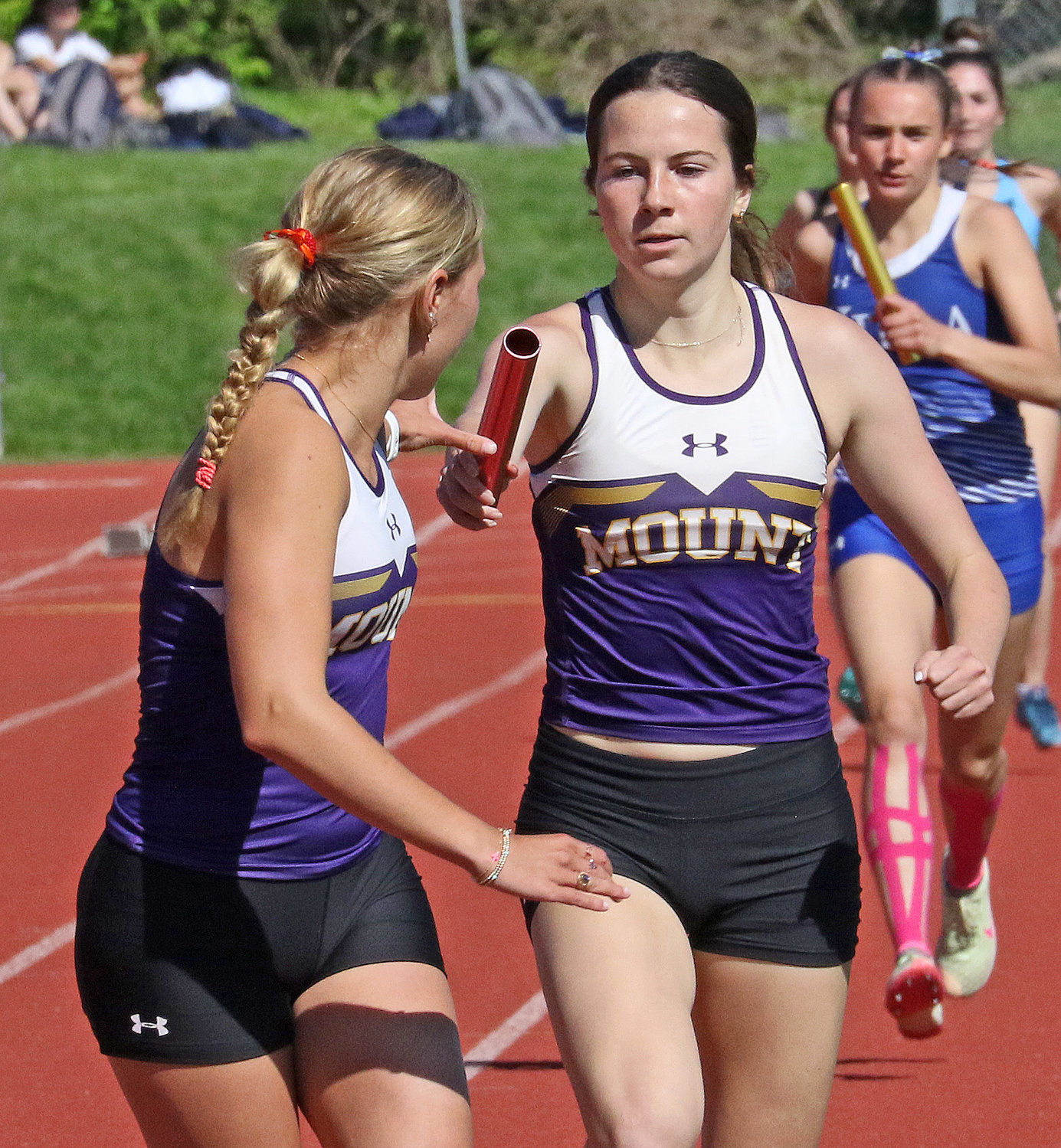 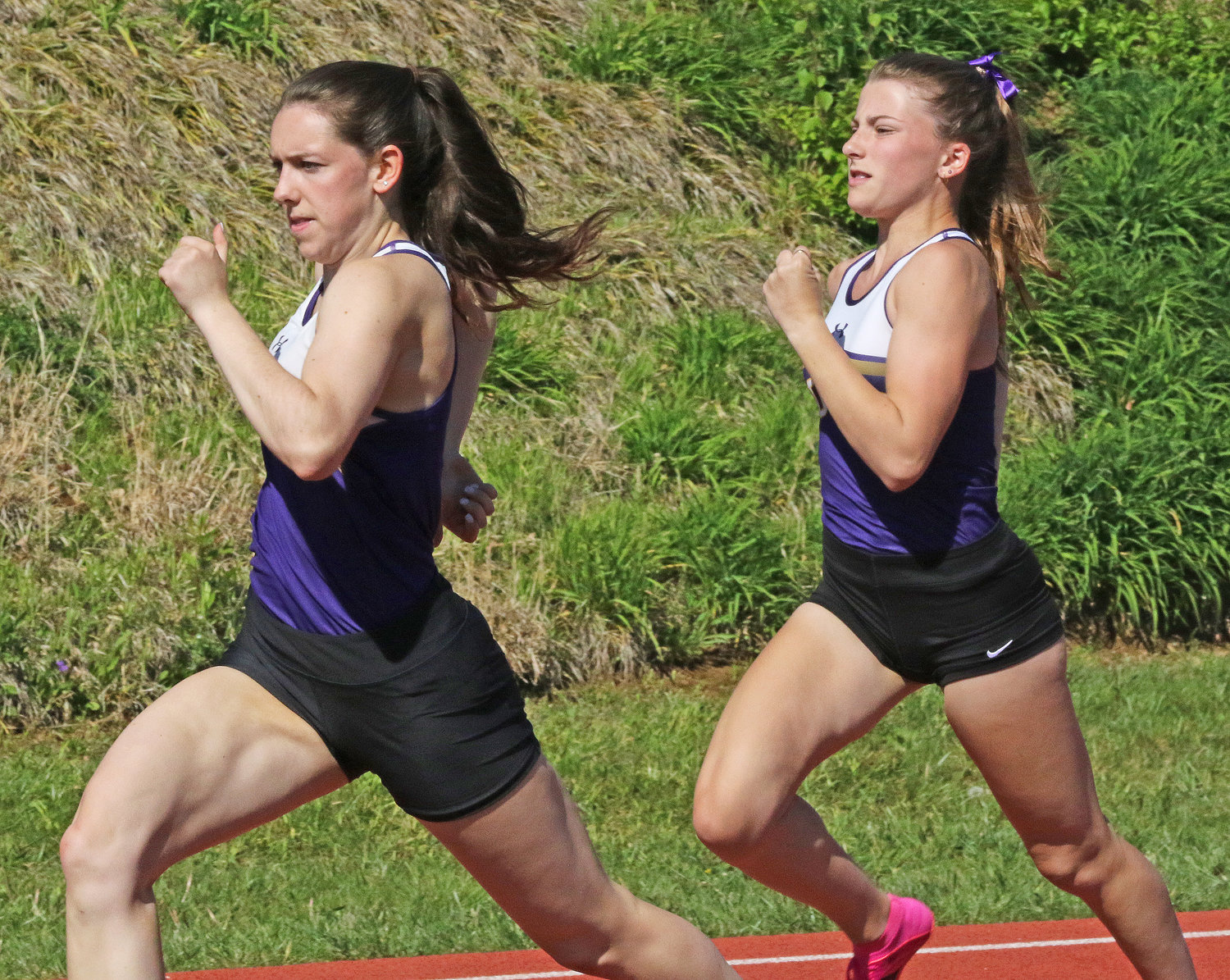 In the preliminary round, Mount senior Kathleen Downs (left) and sophomore Lilly Bradfield both qualified for the finals in the 100 meter dash.  (Photo by Tom Utescher)Mount St. Joseph repeats as AACA track and field champion
Previous Next
Posted Wednesday, May 18, 2022 10:01 am
by Tom Utescher

Hosting the 2022 Athletic Association of Catholic Academies track and field championships last Tuesday, the Mount St. Joseph Magic captured the team title for the second year in a row.

The Mounties went in ready to face a stiff challenge from Villa Maria Academy, and were able to outscore the Hurricanes, 205 to 142 in the final team tally. The Magic had beaten Villa by 22 points in 2021.

This year, Gwynedd Mercy Academy was third with 78 points, while Nazareth and Sacred Heart tied for fourth place with 34 points each. Merion Mercy ranked sixth with 33 points, and Villa Joseph Marie accumulated 26.

"There were some events where we had a lot of depth, but even in the other events we had somebody we felt could do well," said MSJ head coach Kitty McClernand. "The girls were very excited. I told them that it wasn't about PR's [personal records], it was about getting points for the team. We were able to score in every event."

In terms of personnel, there were two significant absences for the Magic at the league meet. One of the top distance runners, senior Mary McGrory (the AACA cross country champion in 2020) was taking AP exams that extended into late afternoon. This caused her to miss one of the earlier events on the schedule, the 4 x 800 relay.

Injury had sidelined ninth-grader Veronica Vacca, who set a new national record for freshmen in the pole vault and won the Nike Indoor Nationals.

In McGrory's absence, senior Christina Kelly became part of the 4 x 800 relay foursome, and the Magic won the race in 10 minutes, 49.25 seconds. The regular runners in this event were senior Olivia Forti (a Norwood Fontbonne Academy grad), and juniors Katie Bakley and Maggie Murphy.

It was an early victory over Villa Maria Academy, which had beaten the Mount in a dual meet by one point during the regular season. Near the end of Tuesday's championships, Murphy would help the Mount continue to pull away from the Hurricanes as she won the 3200 in 12:16.37 while Forti finished third.

Another double champion was senior Kathleen Downs, who won the 100-meter dash (12.85) and also the 200 (26.99), where the Magic had a one-two finish thanks to sophomore Ella Vogel.

In the 400 meters, the victor was Gwynedd Mercy sophomore Molly McCartney (1:01.12) while Mount 10th-grader Lilly Bradfield placed second. Gwynedd also picked up points in the relays, winning the 4 x 100 in 51.37 seconds with McCartney, senior Emily Morrison, and juniors Sabrina Beniquez and Ashley Kane, and capturing the 4 x 400 in 4:10.30 with McCartney, Beniquez, Morrison, and senior Ellie Perry.

Bakley, Downs and Woehlcke ran in the 4 x 400 along with junior Julia Donahue, finishing second, and the Mount was also runner-up in the 4 x 100, where sophomore Aurora Martin joined Bradfield, Donahue, and Vogel.

The Hurricanes had a strong showing in the hurdles, with one-two finishes in both the 100 and 300, but the Mounties had sophomore Constance Huber come in third in the 100's. Senior Skylar Vacca (Veronica's sister) placed fourth in each of the hurdling events.

Turning to the field events, Coach McClernand related, "In the past, we haven't been as competitive with Villa in the throws, but this year we scored pretty well."

Mount senior Sydney Okeke won the shot put (34'3.5") and sophomore Sannai Jones took third place after a Nazareth thrower. Villa Maria won both the discus and the javelin, and in the discus Okeke came in third. In the javelin, MSJ freshman Marin Stensrud surpassed the 100-foot mark for the first time to place second, while senior Haley Stefanik was third.

Villa won the long jump and triple jump and was second (behind Sacred Heart) in the high jump, but MSJ juniors Liz Sadorf and Faith DeCarlo made sure the Magic collected some points. Sadorf was second in the triple (where senior Katie McGovern was fourth) and fourth in the high jump. In Vacca's absence, Villa Maria went one-two in the pole vault, but DeCarlo placed third, as she did in the high jump and long jump.