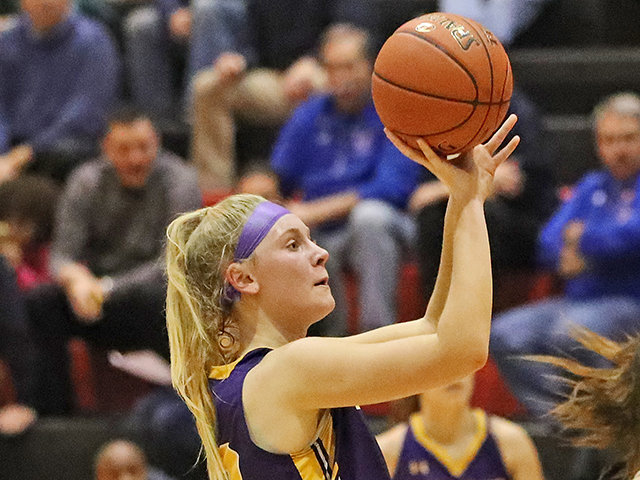 The Mount's Grace Niekelski takes a jump shot from beyond the foul line during a 2020 District 1 tournament game. (Photo by Tom Utescher)

Mount St. Joseph Academy's basketball team played its final game in early March, appearing in the first round of the PIAA Class 5A tournament. The Magic lost that game, but it turned out even the winners wouldn't get much farther, as the season was soon ended due to fears over COVID-19.

While there are still many Coronavirus clouds on the horizon, the Mount's top player has found a clear path to the college level of play. Grace Niekelski, a six-foot guard/forward who has just finished her junior year, has made a verbal commitment to Dartmouth College.

Having played organized basketball since the sixth grade and having been eyed up by college recruiters for some time, Niekelski said, "It's great to finally get the college decision done. It's exciting to really know where I'm headed, especially since my AAU season being cut short."

Niekelski has been a starter for Mount St. Joe's ever since she arrived as a freshman. This past January, only midway through her junior season, she scored her 1000th point as a Mountie, and at the end of the season

Matt Feeney, who began his first campaign as MSJ head coach last fall, remarked that as a first-year skipper, "It was great to have a player of Grace's caliber, along with an experienced team."

For opposing ball clubs, he noted, "She's a lot to handle on the offensive end. She can take the ball to the hoop, she can shoot a jump shot, and she can handle the ball well. She's big and strong, and she plays the game aggressively."

In her college search, she considered several other Ivy League schools, but eventually her "short list" came down to Dartmouth, the College of William and Mary, and Loyola (MD) University.

Academic reputation was an important factor in her final decision. She's a strong student like her older sister Maddie, a former Mount athlete who has just finished her freshman year at Notre Dame.

In addition to the academic opportunities that would be hers in Hanover, NH, she got a good feeling from the Dartmouth coaching staff.

"It seems like I've known them for so long, and I feel comfortable with them," Niekelski said. "I visited twice, and I thought it was just the best fit for me."

Dartmouth basketball is roughly in the middle of the Ivy League pack along with Harvard; the two schools split in their home-away series this past season.

"They said I could be making an immediate impact when I come in," she related. "They're trying build up the program with the class ahead of me and with my class."

Her parents have been fixtures in the stands at Mount St. Joseph games, and Niekelski projects, "They'll probably try to be there a lot when I'm in college, too."

Her academic interests at the Mount have included subjects such as English, history, and science, and she said she plans to pursue a pre-law curriculum at Dartmouth.

On the court, she now knows she'll definitely be preparing for a Division I college career.

Coach Feeney commented, "I haven't had that much contact with her since the season because we obviously weren't able to play in a summer league, but I think she be working on things like strength and conditioning, ball handling, and refining her offensive moves."

The Mount's 2019-20 team captain, point guard Lauren Vesey, has graduated, but Feeney noted, "Grace has been a leader on the floor by the way she plays basketball. She loves to play hard all the time, and kids will follow her example."

Niekelski was asked what specific aspects of her game she'll focus on for her senior season, she responded, "My ballhandling. This year I think I'll have more of an opportunity to handle the ball because we lost our point guard. That'll help me, because at the next level defenders will be faster and more up on you."

Also, she'll no longer be one of the tallest players on the court.

As she pointed out, "I'll be pushed outside a lot more."

The Mount's Feeney remarked, "I think Grace is preparing herself very well to play at the next level, and she's actually been doing that for a number of years. It's been a goal of hers, and she's put in the work necessary to achieve that goal. Congratulations to her for remaining so focused."

No comments on this story | Please log in to comment by clicking here
Please log in or register to add your comment
Donate now to CH Local
The Latest
Phase 1C eligibility for COVID-19 vaccine starts Monday, April 12
More groups have been added to Phase 1C, including people receiving home and community-based services.