Lauren Vesey, the Magic's senior point guard (center), tries to get off a shot while sandwiched between Alexa Abbonizio (left) and Alyssa Long of Springfield High School. (Photo by Tom Utescher) by … 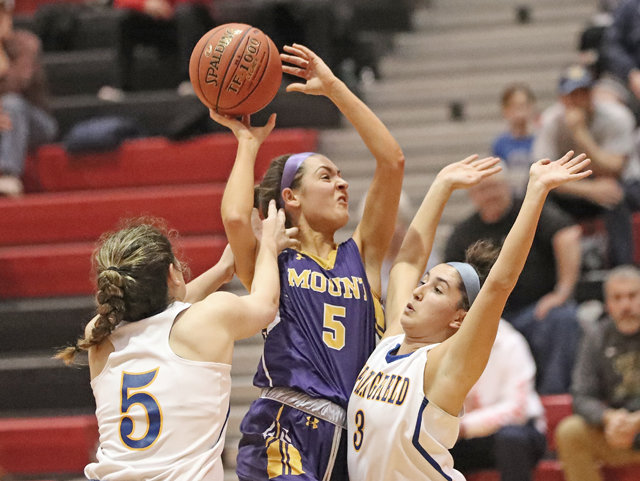 Lauren Vesey, the Magic's senior point guard (center), tries to get off a shot while sandwiched between Alexa Abbonizio (left) and Alyssa Long of Springfield High School. (Photo by Tom Utescher)

After entering the PIAA District 1 Class 5A playoffs as the fifth-ranked team, Mount St. Joseph Academy is going on to the state tournament as a third seed after splitting its last two district contests last week.

In a semifinal on Tuesday evening, the Magic lost, 52-42, to the top seed and eventual champion in the tournament, Springfield (Delco) High School. In a third/fourth seeding game over the weekend, Mount St. Joe downed 10th-seeded Radnor High School, 50-41.

In the opening round of the PIAA state tourney, the Magic will face another three seed, Archbishop Carroll from District 12. They play at 1:00 PM on Saturday at Methacton High School.

Last Tuesday in the district semi's, senior forward Kelly Rothenberg scored inside for the Mount to open the proceedings, then four different Springfield players scored inside, outside, and from the foul line to go up 11-2. Junior Grace Niekelski, who would pour in a game-high 20 points, swapped field goals with the Cougars' Rachel Conran, then one free throw by MSJ senior Taylor Sistrunk closed out the first quarter with Springfield up 13-5.

Although the Cougars were the shorter squad, their speedy guards were able to scavenge offensive rebounds by chasing down long bounces off the rim on missed outside shots. They also created Mount turnovers, especially later in the game.

In the second quarter, though, the Mount was able to erase its early deficit. On an offensive rebound at the Magic's end the ball was grabbed and put back up by freshman Georgia Pickett, and after Springfield missed two free throws Rothenberg fired a three-pointer from the right side. Senior Audrey Bryce hit one of two free throws to make it a two-point affair at 13-11, and this was the Cougars' sixth team foul. 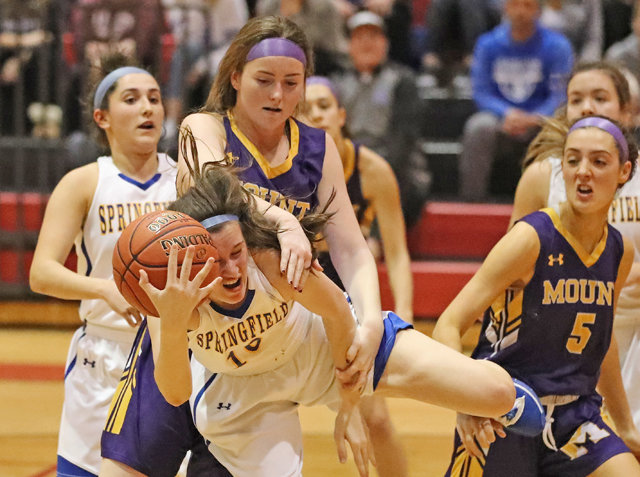 The whistles had been tweeting in both directions, and Springfield would also be in the bonus with the Mount's next infraction. The Cougars whiffed at the line again though, while Niekelski secured both points from a one-and-one to tie the contest at 13-all with 1:47 remaining in he first half.

Springfield had gone without scoring for almost eight minutes, but now Conran connected for a "three" to set the score at 16-13 for halftime. The Cougars were given a trip to the free throw line right at the end, but once more failed to connect.

The Delaware County club would shoot much better from the stripe in the second half, though, and going into the third quarter, there were two personal fouls apiece next to the names of the Magic's Bryce, Niekelski, Rothenberg, and Sistrunk.

Over the initial three-and-a-half minutes of the third frame, Mount St. Joe slipped another two points behind (24-19). Niekelski, who would score 14 of her 20 points in the second half, was fouled while making a short jumper, and then converted the free throw. In transition, Mount senior Lauren Vesey shunted the ball ahead to Pickett for a lay-up, and the game was tied at 24-all with 3:40 left in the period.

Springfield went four-for-four at the foul line during the next two minutes, but the Mount got a three-pointer from the top of the key by Niekelski and a successful drive by Vesey. The Mount had its final lead of the evening, 29-28, with under two minutes left in round three.

Springfield recovered to close out the quarter with an 8-0 run that included one lay-up and three more successful stints at the foul line. A six-for-six effort at the stripe made the Cougars 10-for-10 for the third quarter, and they led 36-29. The Mount's Rothenberg and Sistrunk each picked up a third and fourth personal foul during the period, and Bryce acquired her third.

Springfield did not shoot fouls quite as well in the fourth quarter as in the third, but still went 19-for-22 for the second half.

The final period began with a "three" by Springfield's Conran that put the Cougars up by 10 points, but a transition pass by freshman Lauren Hoffman set up Niekelski for a matching trey. Also in transition, the MSJ junior bagged a 15-footer and a shorter jumper from the lane. The Mount press was disrupting the Cougars' offense, and they called time-out with 3:36 left in the game and a 39-36 lead.

Springfield's Alyssa Long put in the first shot of a one-and-one, but with a little over two-and-a-half minutes to go a rare three-point shot by the Magic's Sistrunk found the hoop, and Mount St. Joe was just one point behind at 40-39.

Now, Alex Abbonizio hit a lay-up for the first Cougar field goal since the opening minute of the fourth quarter, and it would be their last of the night. The next Mount foul was the team's 10th, and Springfield's Carli Johnson made both shots on the double-bonus to make it 44-39.

Niekelski got one point back from the free throw line, but then Johnson put in another pair from the stripe as the Mount's Bryce fouled out of the game with 1:42 on the clock. The score was still 46-40 when Mount St. Joseph called time-out with 66 seconds left.

The Mounties missed a three-point attempt, and on the long rebound Springfield's Long grabbed the ball and drew a fifth foul from Rothenberg, who departed with 53 ticks to go. The two points Long collected at the line were matched by a put-back from the Mount's Pickett, but it was now 48-42 and all of the points the Magic would score were on the board.

In the final 40 seconds Springfield made four of six free throws for a 10-point victory.

Following Niekelski on the Mount's scoresheet were Sistrunk and Pickett, each with six points, Rothenberg with five, Bryce with three, and Vesey with two. Abbonizio and Conran led the Cougars with 17 and 16 points, respectively, and Long finished with nine.