Memeing the days away

In the future, say 50 years from now, the Ken Burns of the future will likely make a documentary about the tumultuous 2010s. He, she or they will examine the great political unrest of our times and …

Memeing the days away 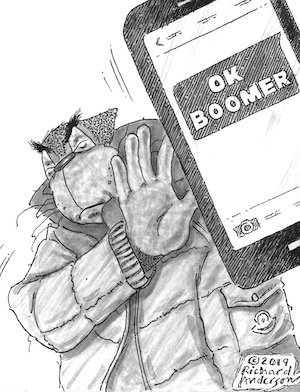 In the future, say 50 years from now, the Ken Burns of the future will likely make a documentary about the tumultuous 2010s. He, she or they will examine the great political unrest of our times and the grave issues of spiraling environmental catastrophe. They’ll wonder what we did to tackle these problems. And they’ll discover we mostly just created and shared memes about them.

A meme, pronounced “meem,” is, according to Merriam Webster, “an idea, behavior, style or usage that spreads from person to person within a culture.” Memes have always existed, from early religious symbols to ‘90s catchphrases. At their core, memes are easy to identify, share and copy.

But the meme has really taken off in the last decade with the mass adoption of social media. Anyone with a Twitter or Facebook account will encounter memes every day. They are the lingua franca of the digital age, with repeated phrases and images that pass for axioms online. Anyone who shares a meme does so as if to say, “Yes! This picture and the accompanying three sentences are truth! They are at once simple and unassailable! Share if you agree.”

Before you all “OK Boomer” me, I’m not here to scold the kids about using memes instead of engaging in rhetorical reasoning to be persuasive. Again, if anyone has been on social media lately, you’ll see memes are just as popular with the Boomers as they are with Zoomers. Boomers may have very well perfected the meme with tasty treats like “How do you frighten a Millennial? Lock them in a room with a rotary phone, an analog watch, a TV with no remote and leave the directions in cursive. Har har! Share if you agree.”

“OK Boomer,” which is now barely more than two weeks old, is a particularly great example of the cultural phenomenon of the modern meme. What began as little more than a catchphrase – an update, really, of the Gen Xer’s de facto response to adults: “Whatever” – became a political debate in which cultural institutions from the AARP to Walt Disney heiress Abigail Disney weighed in.

Many millions of words have since been poured into debating the validity of young people’s complaints against older adults, the fragility of younger people and just who is right in our new intergenerational war. The sum total of this debate? Whatever.

Perhaps these debates are worth having. Perhaps underneath every meme is some nugget of a larger truth for which discourse is appropriate. But I’ll bet any amount of money that thoughtful discussion has never been the end result imagined by the meme manufacturer. Memes aren’t invitations to conversation.

I don’t know what it all means, other than that at some point in the future, if there is such a thing, people will look back at the sheer magnitude of bandwidth we’ve dedicated to pictures with pithy pronouncements and really wonder just what on Earth we were all doing with our time.