On the surface, the first week of 2022 looked to be a good time for Chestnut Hill College's opponents to take on the Griffins' basketball team. 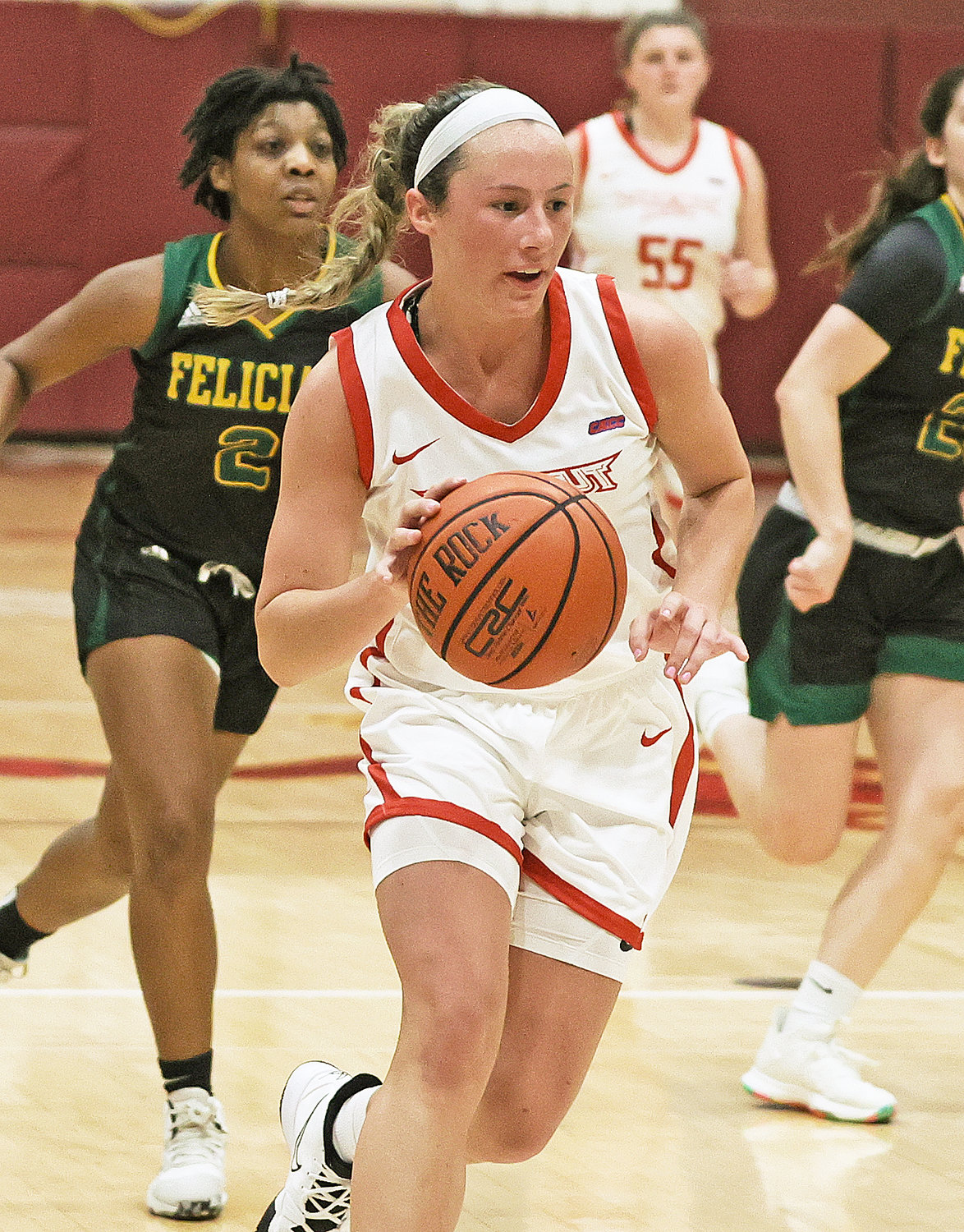 Kait Carter, a Penn Charter grad ('20), is playing her first season of basketball at Chestnut Hill College following the cancellation of the 2020-21 season.  Photo by Tom Utescher 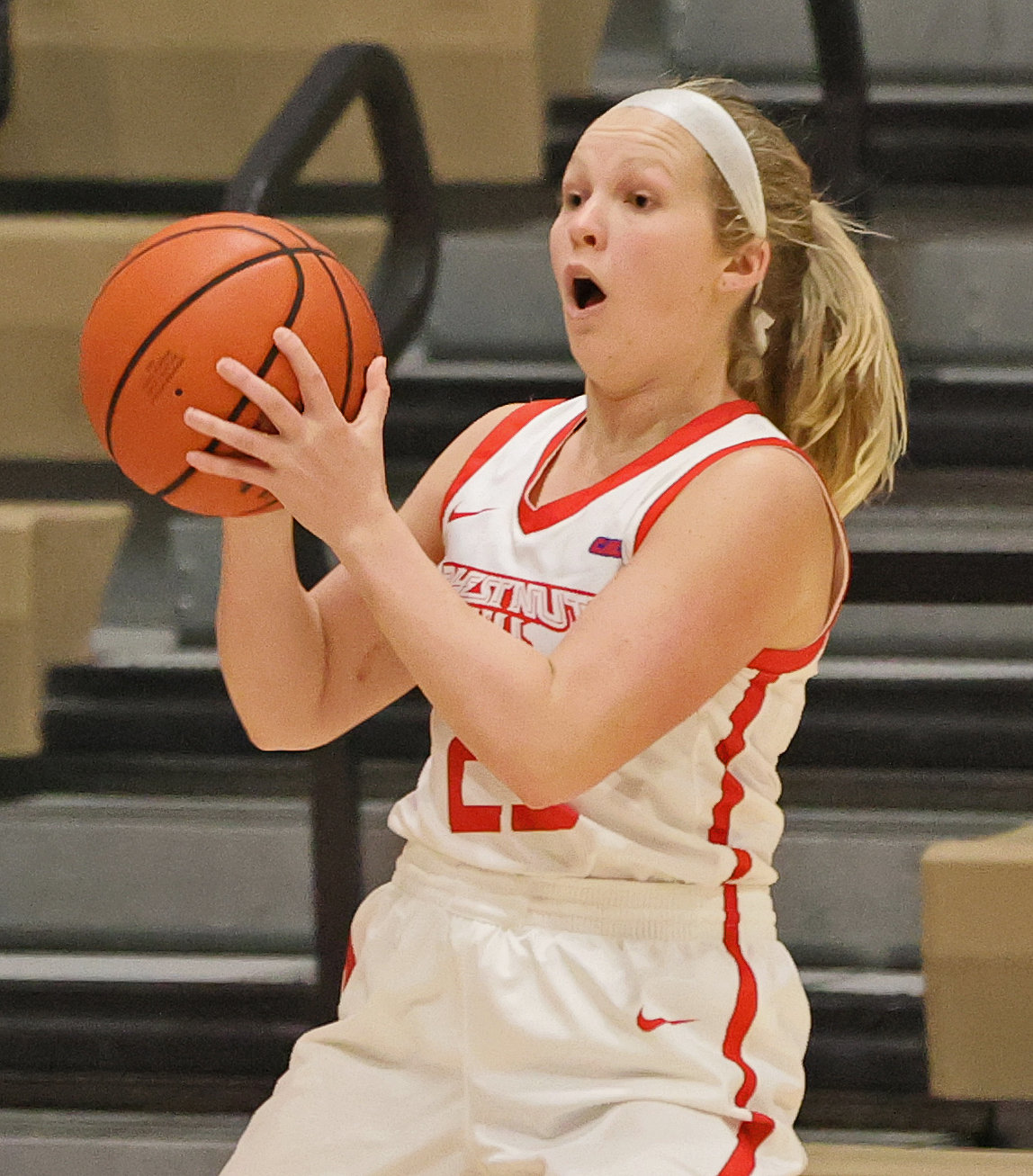 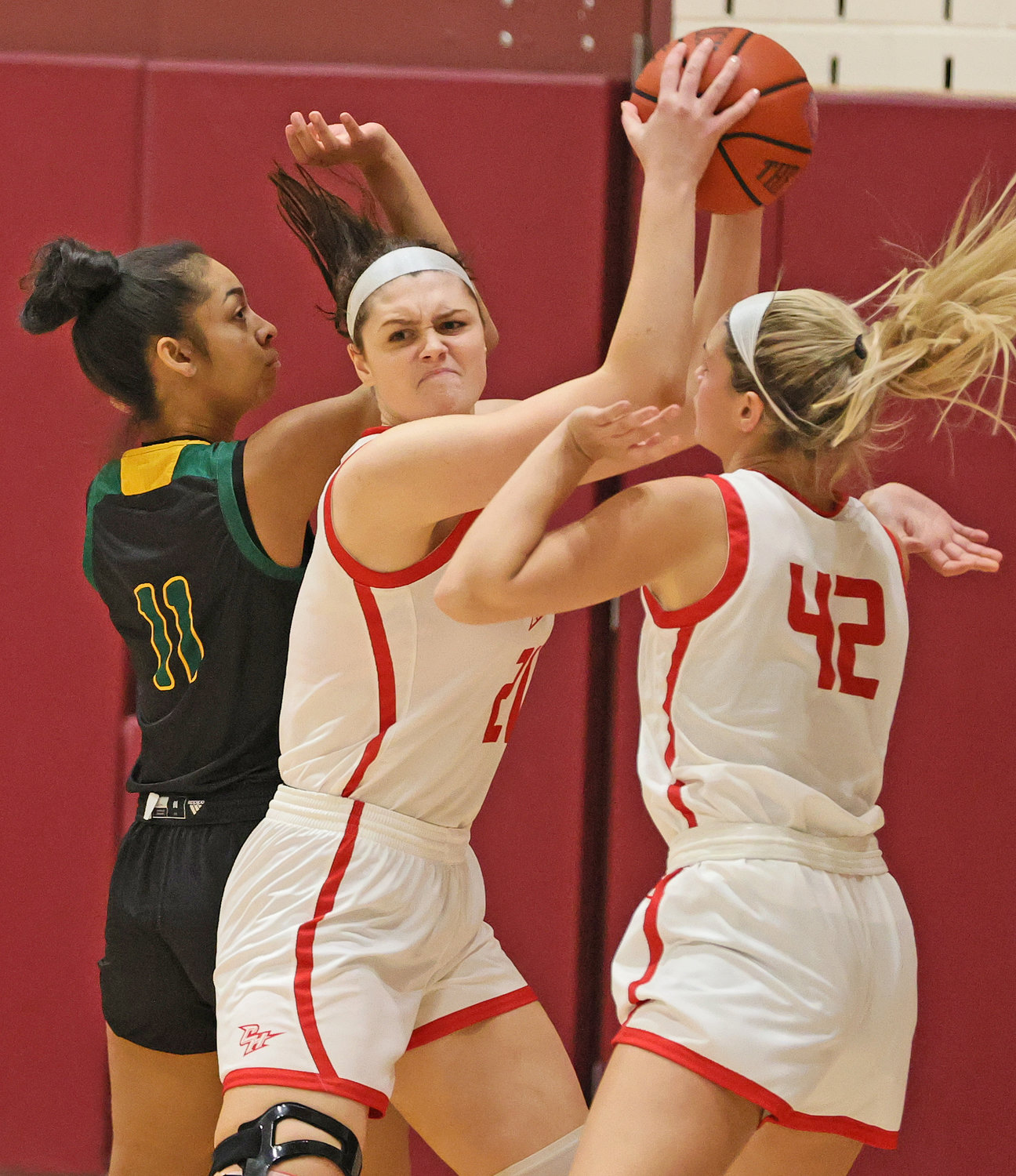 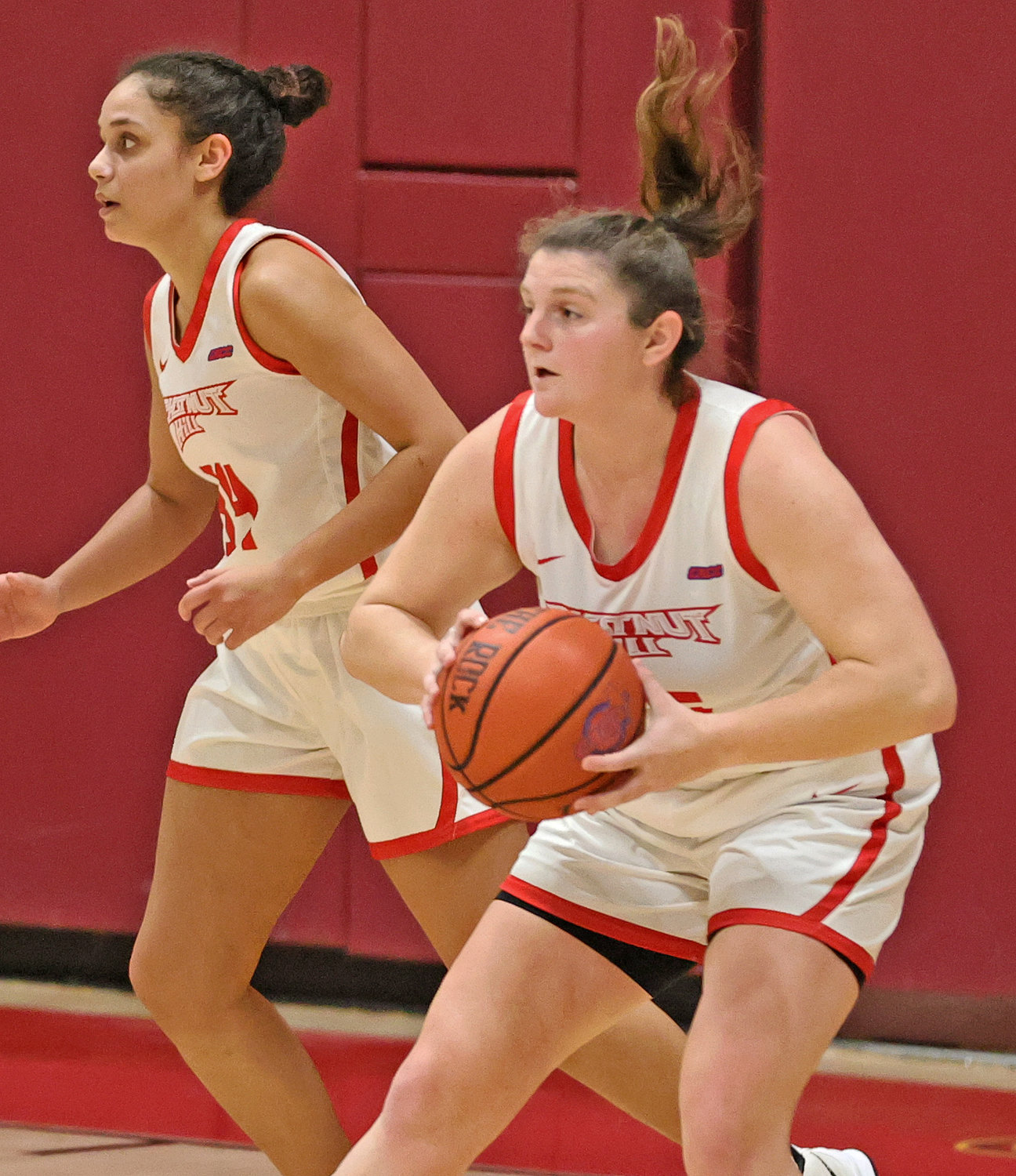 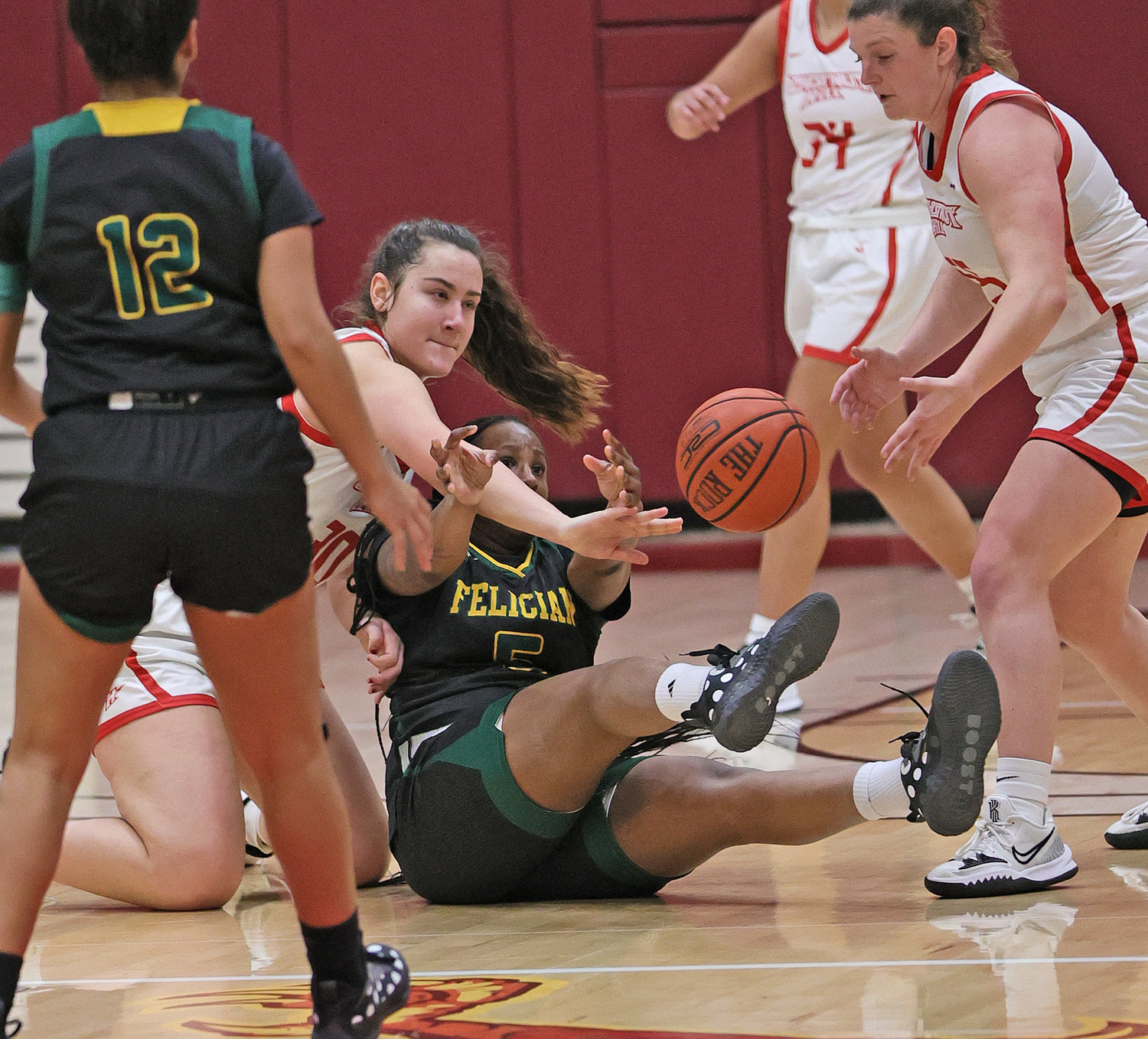 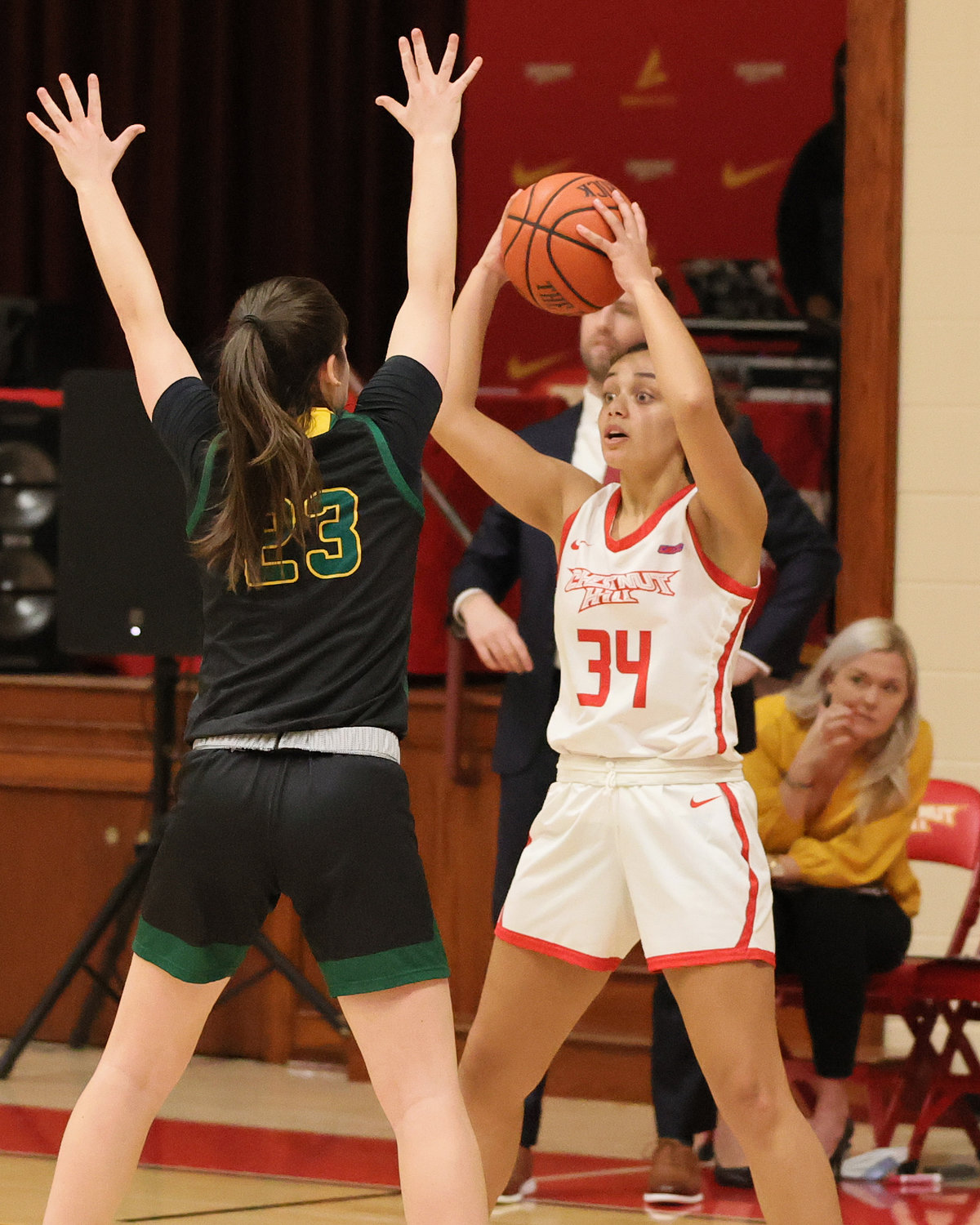 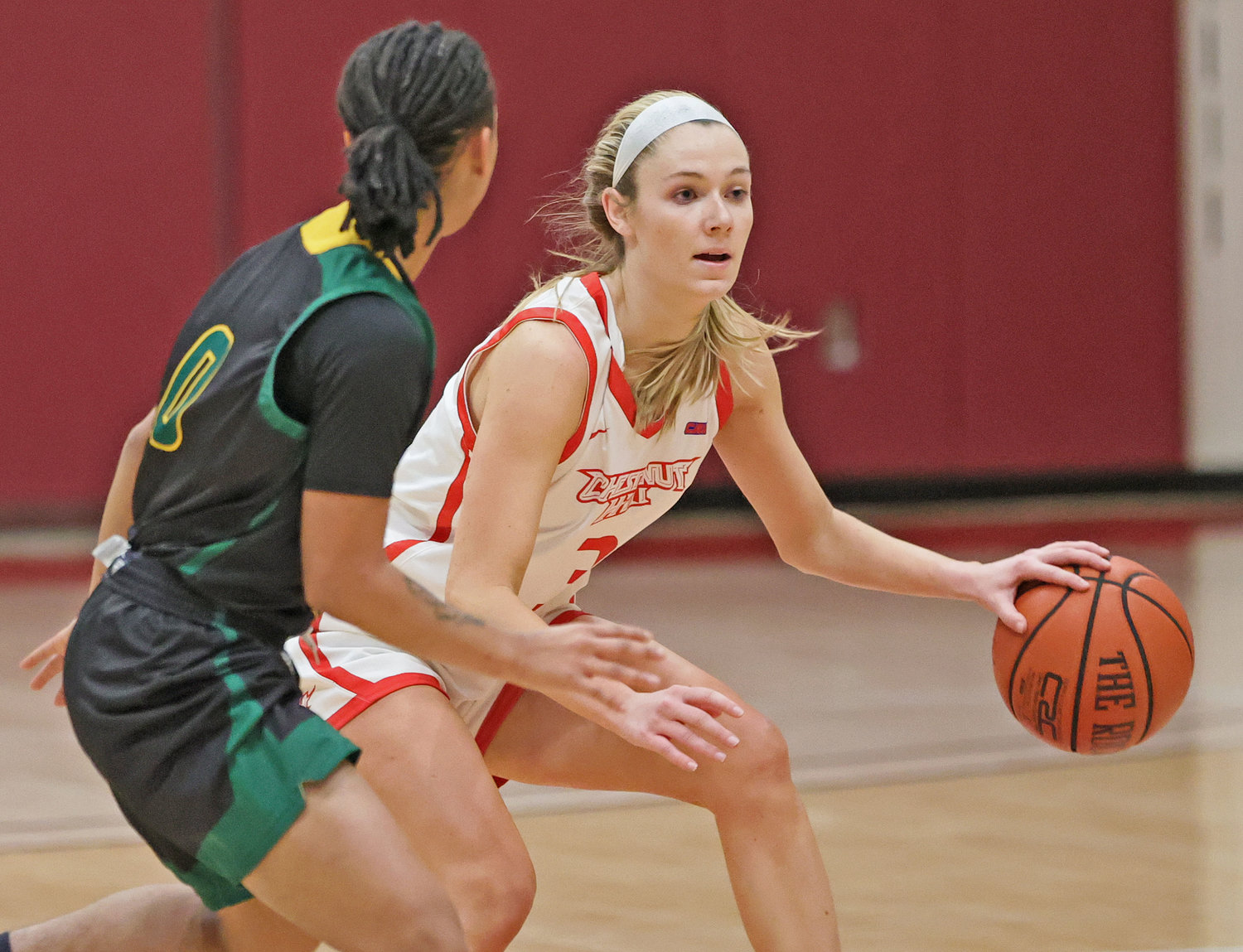 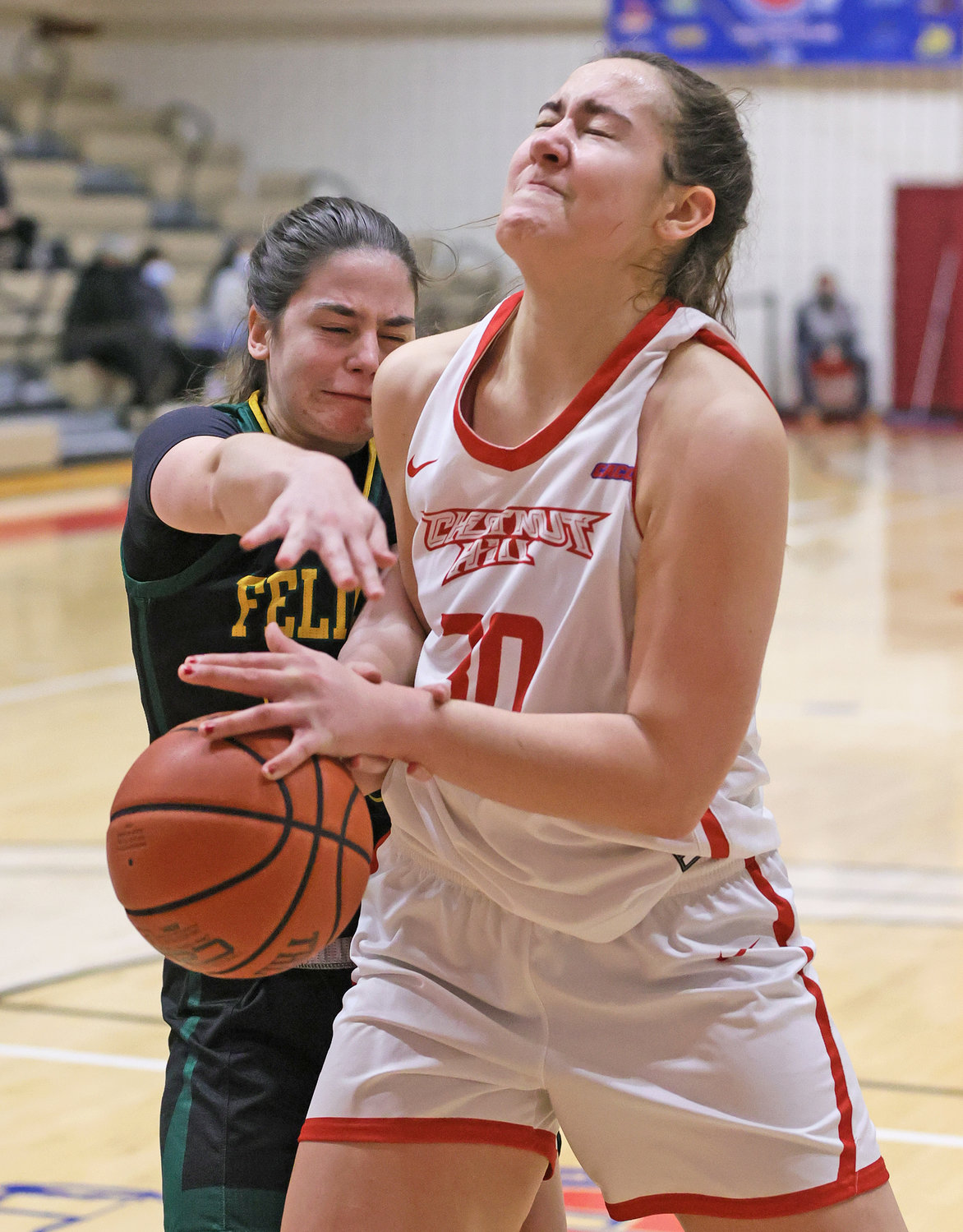 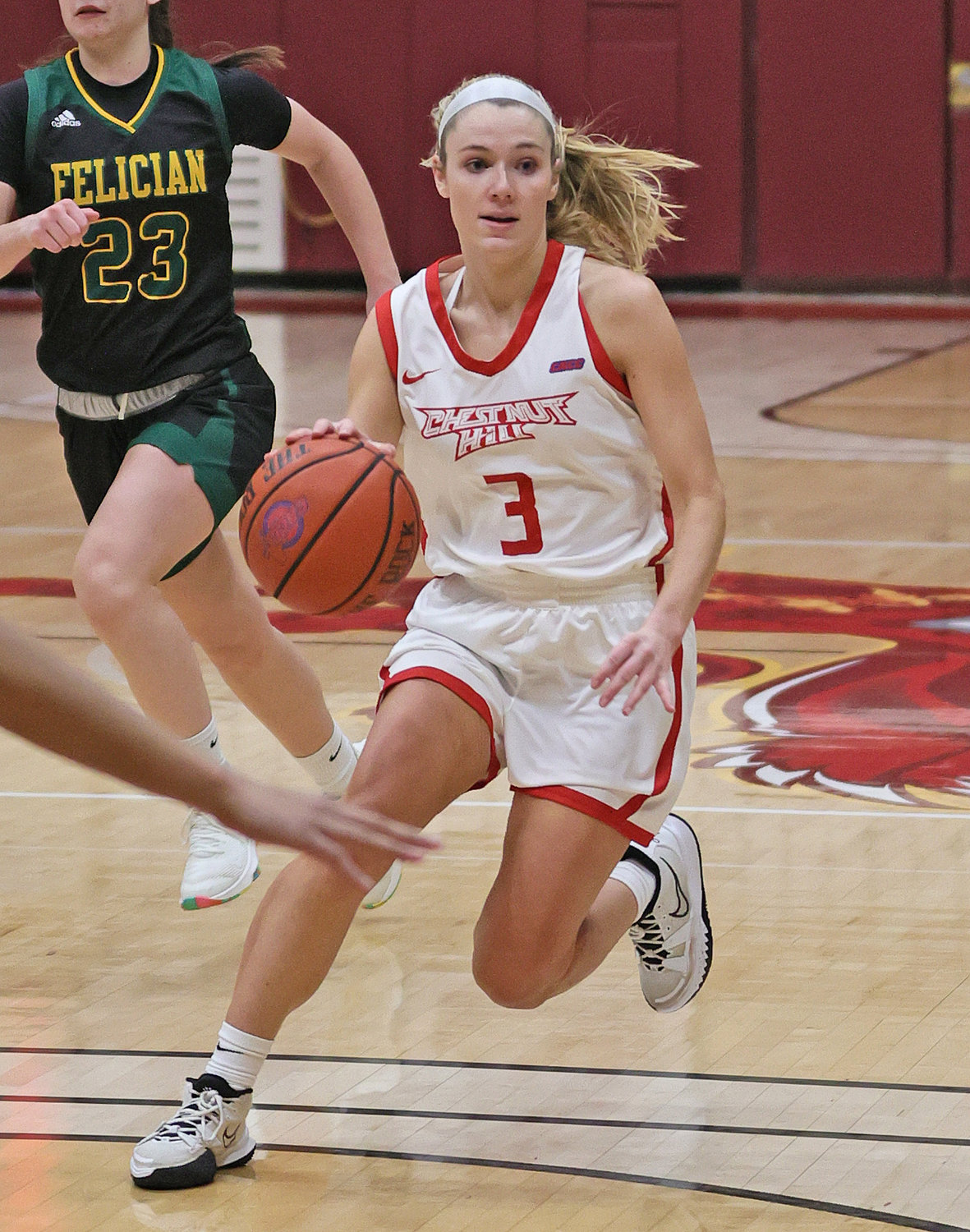 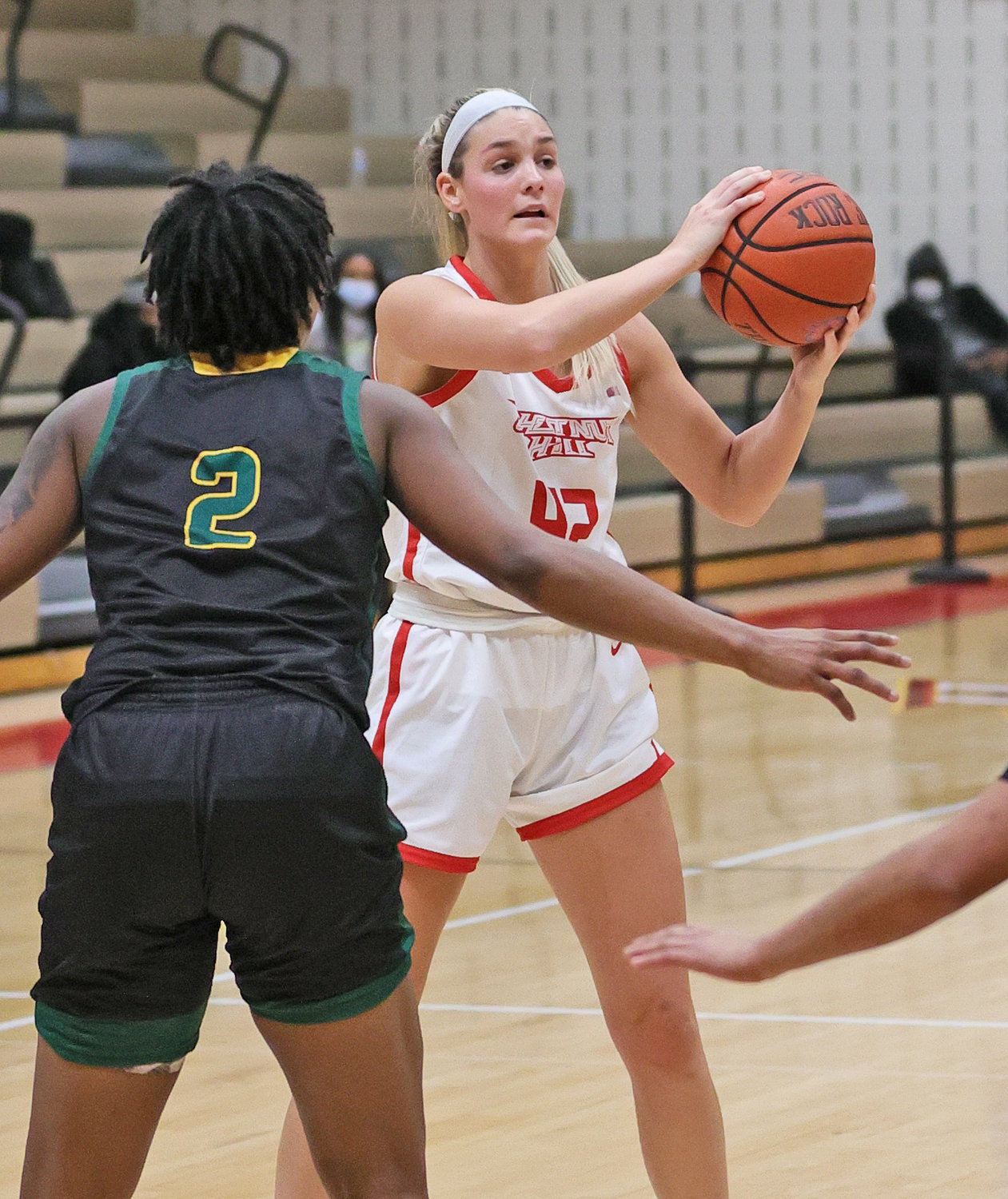 On the surface, the first week of 2022 looked to be a good time for Chestnut Hill College's opponents to take on the Griffins' basketball team. Many ball clubs have players out with COVID, but the CHC women have it worse than that.

They have a few players down with the virus, but mononucleosis and a knee injury will have other athletes out of action for much longer. Last Saturday, though, the eight remaining Griffins gave a clinic on overcoming adversity, pulling off a 61-57 overtime victory against visiting Felician University.

Like Chestnut Hill at this early stage, Felician had been undefeated in the Central Atlantic Collegiate Conference. After their victory over the weekend, the Griffins were 4-0 within the CACC and 10-3 overall. The Felician Falcons went back to northern New Jersey with a record of 2-1, 4-8.

Last winter, the CACC shut down the basketball season due to the Coronavirus. That meant that guard Kait Carter, who was starting out at Chestnut Hill College in the fall of 2020 after graduating from Penn Charter that spring, could not play as a freshman.

Although the team is active this season, the aforementioned medical problems have put personnel constraints on the Griffins. A big guard at 5'11", Carter has found herself in a starting role, and she also has to be ready to play different positions.

Among the six players sidelined at CHC are three seniors and two juniors, including the starting point guard and also a post player who was performing well enough to be mentioned as a possible conference player of the year.

"We became a much younger team very quickly," Carter noted. "With fewer players, we have to be prepared to play more positions than we usually do. I'm trying to transition to being a big three/four player, and being strong around the basket."

Two 6'2" freshmen named Emily (Chmiel and Sererak) have had to adapt to the collegiate post position in a hurry, and they've done well.

Neither started against Felician, and in the early stages of Saturday's game the Griffins were being outrebounded. The Lady Falcons were also a quick team who didn't give up many opportunities in the transition game as they hustled down on defense in a hurry.

Near the end of the first quarter, the visitors had built an 18-10 lead, and with a few seconds left Carter was to make an inbounds pass from CHC's own baseline. She found Chmiel across the midcourt stripe, and the freshman flung up a successful three-point shot from about 10 feet above the three-point loop.

Although Felician had two different players pick up a third personal foul during the second quarter, the Falcons stayed a basket or two ahead of Chestnut Hill most of the way. They led 29-24 going into the final minute of the first half.

CHC junior Lindsey Lane drove for a lay-up with 14 seconds left, then the visitors missed a shot at the other end. Once again the Griffins were in the position of having to heave a desperate final shot right before the buzzer. Senior guard Abbey Spratt was the shooter this time, and Chestnut Hill's luck held as her shot went in to tie the score at 29-all for the intermission.

At the half, CHC's scoring was led by Lane, with seven points, and Carter, with six. Coming off the bench, Chmiel topped the rebounding stats, with seven, and also contributed five points.

Neither team could make a meaningful break throughout the second half of regulation play. Felician took a 42-39 advantage into the fourth quarter, and that score stayed on the board for almost five minutes. The locals eventually pulled even at 47-all on a put-back by Chmiel with two minutes to go.

Lane drove up the middle to move the hosts ahead, and on the Griffins' next trip down the floor a missed shot was rebounded by Carter, who was fouled for a one-and-one. Her first shot bounced straight up off the back of the rim and dropped through the net, then the second missed, leaving CHC up by three as the final minute of the fourth round began.

Fruitless possessions for each team followed, and with under 10 ticks left the Falcons were working the ball around on offense. The Griffins had all the known outside shooters covered, but Tiara Mahorn, who hadn't tried a trey all night, now hit one from the left wing. The bout progressed into overtime at 50-50.

A three-pointer by a different Felician player launched the five-minute OT, and while Chestnut Hill only managed a single made free throw, the New Jersey club built a 57-51 lead. Chmiel fouled out, and Sekerak replaced her for CHC.

Chestnut Hill's comeback began halfway through the overtime round, when Lane freed herself with a spin move and put in a jump shot. A little later, a shot by Carter didn't drop, but Semerak followed it in to make it 55-57. After Felician turned the ball over with a walk, Semerak bagged a jumper from inside the foul line, tying things up at 57-57 with 1:14 on the clock.

The Falcons were whistled for another traveling violation, and were hit with a technical foul when they protested too strongly. Normally Chestnut Hill's outside shooting ace, junior Lauren Crim had been having an off night, but CHC coach Jim Connolly still sent her to the line to shoot the technicals. She came through on both shots, giving her team a 59-57 edge.

That was the score when the visitors called time-out with 18.5 seconds to play, and after Felician missed a jump shot from the right side, CHC called time with 06.8 on the clock. The Falcons tied up the ball off of the Griffins' inbounds pass, but Chestnut Hill had the arrow.

Felician's Mahorn fouled out of the game, sending Lane to the stripe to put away two foul shots with half-a-second to go. The Griffins had finished with a 10-0 run to capture the victory.

"Felician's a hard team to play against; they're very aggressive," Carter commented. "Our Kutztown game also went into overtime [CHC lost 60-55], so it was basically the same strategy this time. We're good on defense, so we wanted to get stops, and then be calm and focused on offense."

Majoring in chemistry with a minor in biology, Carter wants to become a dentist.