Students work at creating their own bouquets at a Love 'n Fresh Flowers workshop at The Woodlands in West Philly. by Elizabeth Coady The forecast called for a foot of snow on the first day of spring, … 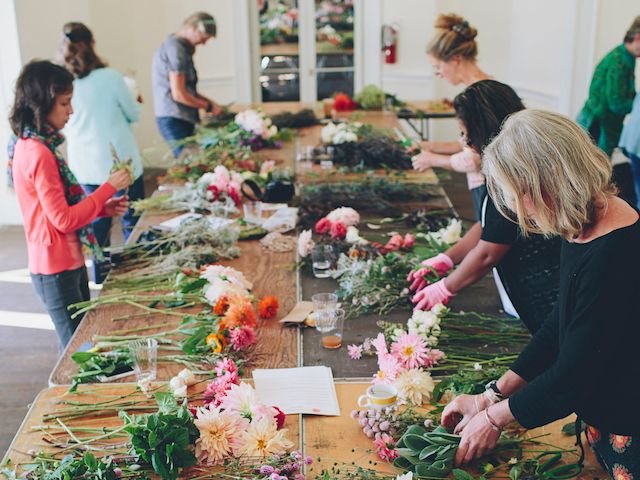 Students work at creating their own bouquets at a Love 'n Fresh Flowers workshop at The Woodlands in West Philly.

The forecast called for a foot of snow on the first day of spring, vexing Chestnut Hill's nationally renowned flower farmer Jennie Love. It's late March, and the land that will yield 200 different varieties this growing season under the auspices of Love 'n Fresh Flowers is still sleeping.

The cold and snow threatened the first blooms on the earliest tulips to break through the soil, and the dull gray skies made Love ''unhappy. It's definitely super dormant. It shouldn't be this dormant.''

Love will tell you that worry and the vagaries of weather are two constants in the life of a farmer. But the promise of bounty motivates. “I love flowers; there's no question about it,'' said Love, hailed by the Philadelphia Inquirer as an "urban farming pioneer.'' ... "They're my favorite thing on earth.''

If Love's meteoric success as a flower farmer is any measure, then the feeling is mutual. In the nine years since she planted her first seeds on two acres of leased land in Upper Roxborough, Love has catapulted to national attention for her wedding floral designs and her efforts to promote sustainable local farming.

Earlier this month she finalized the purchase of four adjacent acres on which she plans to expand her yield. Frequently described as "fresh," "unique," "textural,'' "lush" and ''unexpected," Love's floral stylings are like a boozy cocktail party where each lovely variety vies for your attention, and the wallflowers provide the necessary backdrop.

"It's been a really good journey,'' the 30-something (she declined to disclose her exact age) admits, "but it's a lot of hard work and a complex business that I run … It's a strategic game.''

Raised on a dairy farm in Central Pennsylvania, Love planted her first flower patch at age 4 — nasturtiums — in her mother's kitchen garden. "Farming gets in your blood,'' she confessed. 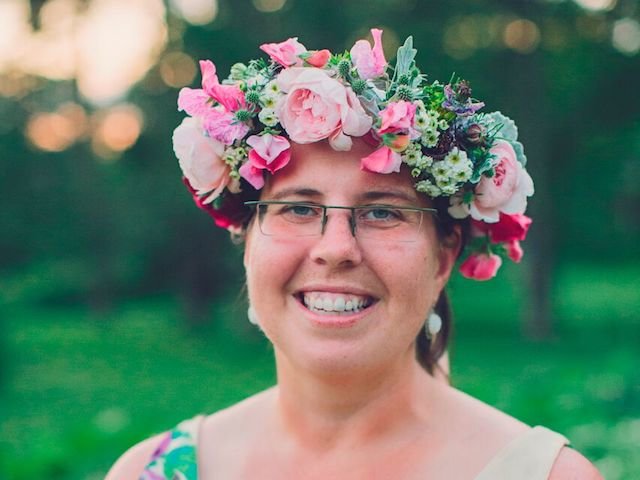 Jennie Love, of Chestnut Hill, has catapulted to national attention for her wedding floral designs and her efforts to promote sustainable local farming.

Yet when it was time to go to college, she couldn't wait to flee. She attended Muhlenberg College in Allentown, majoring in communications and comparative world literature. For nearly a decade afterwards she toiled as a writer in corporate jobs. "I dreamed of wearing high heels and suits for some reason,'' she said.

Then when the grind soured, she yearned to get her "hands in the dirt.'' She began volunteering at the Weavers Way farm near Awbury Arboretum in Germantown. She became a ''farm groupie'' who would rush home to work in the fields until the sun went down. She convinced Weavers Way farm staff to grow flowers and sell their yields at the Headhouse Farmers Market in Center City. She also dreamed of beginning her own flower farm and enrolled in a two-year program at Longwood Gardens to study "the science of flowers.''

In 2009, the year she collected her first yield, she was hired to create flower bouquets and arrangements for her first wedding. By 2015, she was booking 40 to 50 weddings per season and was touted in Martha Stewart Weddings as among the nation's top floral designers. Demand for her services grew, and at one point she contracted to handle 75 weddings per season but found that number stretched her seasonal staff of six too far.

"That was too much to manage,'' she said. "Now we focus more on quality than quantity.''

For her wedding designs she uses only in-season flowers grown on her farm. You won't find roses and gardenias, constants in wedding bouquets, in Love's arrangements because they don't grow well in Philadelphia's humidity and heat. Her bouquets and centerpieces reflect what's being harvested at the moment.

Love writes joyfully about flowers on her website, penning lines like "I fall head over heels for each new bloom that comes into season in the fields'' and "Floral design makes my heart sing. I dream about it at night.'' 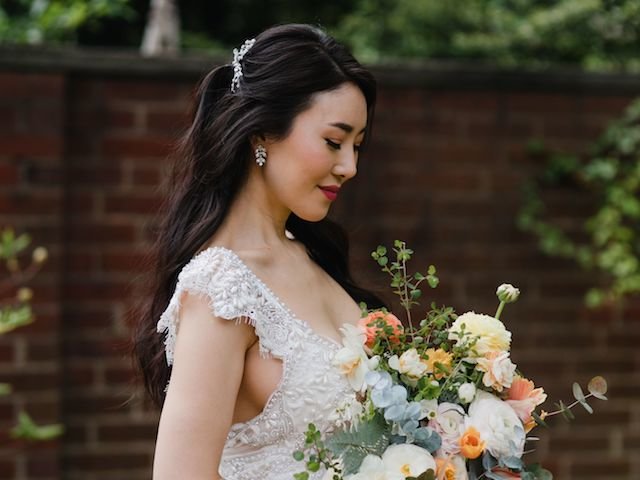 By 2015, Love was booking 40 to 50 weddings per season and was touted in Martha Stewart Weddings as among the nation's top floral designers. (This bride is holding one of Love’s bouquets.)[/caption]

But on this chilly gray March day at the farm, which is home to two stray felines named Leo and Tigre, Love gets most animated when she talks about succeeding at running a "profitable, sustainable'' business and helping other women floral entrepreneurs to succeed. Profitability, she says, is at the root of running her farm; otherwise, it isn't sustainable.

"You have to go past the pretty thing and go for the practical thing to make money,'' said Love, who is also the current vice president of the Association of Specialty Cut Flower Growers. "It's a constant puzzle.''

She eschews buying flowers that aren't locally grown, comparing them to "strawberries in February." She laments the ecological tax that the international flower industry imposes on local economies, what she calls "the sins of the global flower industry.'' In a long blog post at LovenFreshFlowers.com, she points out that chemicals, water demands, low wages and shipping all place burdens on land and communities.

"The international transit process also creates heaps of trash,'' she writes on the blog. "The flowers for a single FTD bouquet could generate enough rubbish to fill a curbside trash can! That’s trash that stays in our landfills for decades to come.''

Conversely, flowers grown locally "are usually grown organically or with very minimal chemicals. They grow in a field where the natural rain and sun support their growth, instead of in a hot house under plastic, being fed a slurry of synthetic fertilizers under artificial light. Locally grown flowers only require a bucket … and maybe a bit of paper for wrapping a bouquet."

Her own paper-wrapped bouquets can be bought in season at Weavers Way in Mt. Airy and Chestnut Hill. Love says she is enormously grateful for the support she receives from Chestnut Hill specifically and Philadelphia as a whole. "Chestnut Hill is important to me,'' she said. That people buy her bouquets at Weavers Way is "one of my favorite things … I just think Philly as a whole loves supporting the little guy … For whatever reason, the culture really roots for small businesses.''