The Mt. Airy duo will perform at the Folk Factory in the Unitarian Universalist Church of the Restoration, 6900 Stenton Ave., on Sunday, April 9. By Stacia Friedman There is no shortage of … 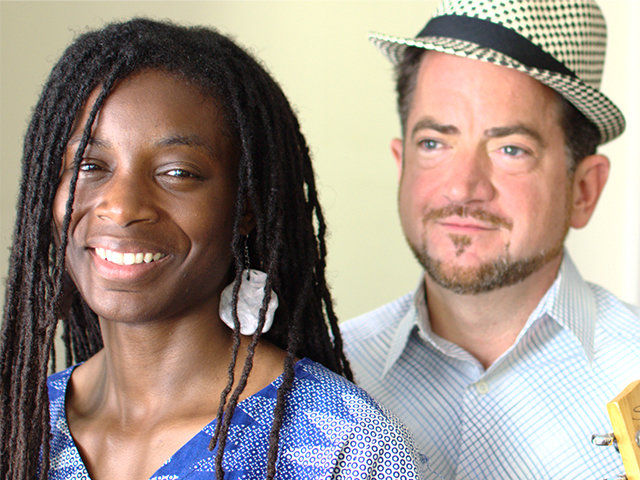 The Mt. Airy duo will perform at the Folk Factory in the Unitarian Universalist Church of the Restoration, 6900 Stenton Ave., on Sunday, April 9.

There is no shortage of singer/songwriters in the Northwest. However, the Mt. Airy duo “Bethlehem & Sad Patrick” breaks the mold every time they take the stage.

Stoic and bearded, Patrick Arkins, 53, could pass for a Penn professor who put down his brief case and picked up a guitar. Standing next to Bethlehem Roberson, 34, Arkins all but disappears when the lithesome singer’s waist-length braids start flying, her hands clapping and feet stomping.

Recently named the “next rising star” by WHYY/NewsWorks after the release of her first solo album, “Bigger Than Music,” Roberson describes her mix of song and body percussion as a “vocussionist.” The duo refers to their music as “Blues, Soul, Jazz, Love and Heartbreak.”

“Growing up in Germantown, I listened to my father and uncles sing gospel music, keeping the beat by clapping their hands and stomping their feet,” she said. When she performs, Roberson claps and stomps, but she takes it a step further by wearing tap shoes and accentuating the sound with a “tarima,” a wooden box that comes from the flamenco tradition. It’s a three by two-foot box made of poplar and pine that turns her footwork into a drum kit.

Before they met in 2011, Roberson and Arkins were seasoned singer/songwriters in their own right, each with their own individual style, influences and musical range. “I had just moved from Bella Vista to Mt. Airy and was looking for places to perform,” said Arkins, who came from the folk tradition and accompanies himself on guitar. “I met Bethlehem at an open mic night at the former Wild Beans (now Malelani Cafe).” And, yes, Bethlehem is her real name. “It means house of bread in Hebrew,” she said, “When I sing, I feel that I am feeding people’s spirits.”

While most singer/songwriters prefer to perform their own material, Arkins and Roberson saw the advantage in teaming up. “Bethlehem sings my lyrics exactly the way I hear them in my head when I’m writing,” said Arkins. “Plus, I tend to be overly serious, and she’s always positive.”

“When we perform together, I sing Patrick’s material, but when I perform solo, I sing my own songs,” said Roberson. But she doesn’t sing every song he writes. “If it doesn’t speak to me, I won’t sing it,” she said, “However, I appreciate Patrick’s simplicity, which allows me room to create.” Meanwhile, Arkins doesn’t mind if all eyes (and ears) are on Roberson, whose captivating voice conjures up the velvety, soulful sound of Sade. “I might open for Bethlehem, but I’d never want to follow her,” he said.

So why is Patrick so “sad?” “My brother once introduced me to the crowd in an Atlanta bar as ‘Sad Patrick’ because my early songs were long and melancholy. I thought it was funny so I kept it,” said Arkins, who is now far from sad about the path his career has taken since joining forces with Roberson. “We’ve received a lot of support from WXPN. They played us on ‘Sleepy Hollow,’” he said.

For now, Roberson and Arkins are holding onto their day jobs. He provides tech solutions for a major Philadelphia law firm while she runs Otenti Love, a natural hair care salon in Mt. Airy for which her head-turning coiffure is a walking advertisement