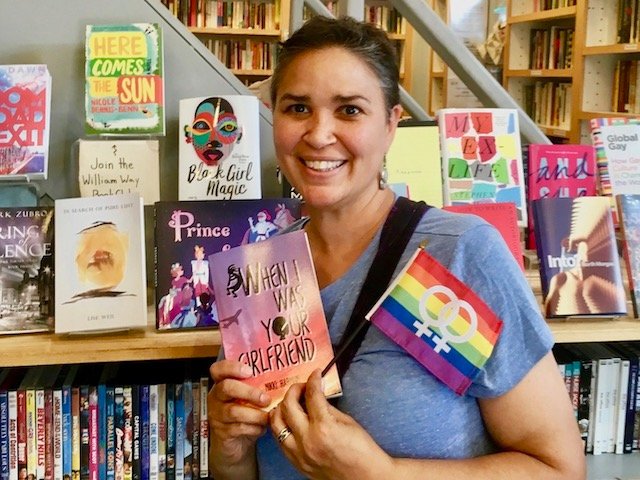 Novelist, film producer and former college professor Nikki Harmon will discuss her book, “When I Was Your Girlfriend,” on Sunday, Nov. 10 at 2 p.m., at Big Blue Marble Bookstore, 551 Carpenter Lane in West Mt. Airy.[/caption]

How can you be sure that your first love wasn't your true love? Successful black lesbian midwife Dee Armstrong leads a seemingly charmed life. But when Dee mistakenly believes she will have to confront her first love and first heartbreak, it sends her tumbling back into her memories to re-live the terrifying and exhilarating joy of being a teenager in love ... with another girl. Suddenly obsessed with finding her and reliving that time, Dee sets off on a tumultuous cross country journey in hopes of renewing their relationship.

This is the plot of “When I Was Your Girlfriend,” a compelling, brilliantly told novel by Nikki Harmon (publisher, Mt. Airy Girl Press), who will discuss the critically acclaimed book on Sunday, Nov. 10, 2 p.m., at Big Blue Marble Bookstore, 551 Carpenter Lane in West Mt. Airy.

Harmon, 49, who grew up near Lincoln Drive and Ellet Street in West Mt. Airy and now lives with her partner in Glenside, graduated from Girls High School in 1987 and Wesleyan University in 1991 and received her MFA in Media and Film Arts from Temple University in 1999. In addition to her writing, Harmon has written, produced, directed and performed in various technical positions on several documentaries, short narratives, educational and industrial films, music videos and feature-length films.

In 2002, she joined Banyan Productions and worked on three seasons of TLC’s “A Wedding Story” as a researcher, associate producer and finally as a producer. Harmon also worked on Oprah Winfrey's "Beloved," Aishah Simmons' "NO! The Rape Documentary" and the music videos Will Smith's "Freakin' It" and Jill Scott and Jeff Bradshaw's "Slide," among others.

“I definitely learned the most on 'Beloved,'” Harmon told us last week. “There's no education like working as a production assistant on a major motion picture. It was mind-blowing to see the organization, the hierarchies, the creative processes and the seriousness with which everyone took their job and responsibilities...

“I also made lifelong friends, and that's priceless. 'NO! The Rape Documentary' was probably the most important work I've done. It was an honor to be trusted with conveying those stories and to work with the amazing women and men (also lifelong friends) who were on that production. The 10th Anniversary Screening and Conference was/is this year, Oct. 24 to Nov. 1.”

Harmon has also taught video production and documentary studies at Drexel and Arcadia Universities, but the decision to switch to writing came “after I had been teaching for a while and missed creating my own work. I had small children at the time and not a lot of time to be away from them. Writing was a manageable way to create stories and still be able to care for my kids.

“I have always loved reading. My mom was an avid reader, I spent a lot of time at the Lovett Library growing up, getting out nine books at a time. I think that was the max back then. I also loved creative writing and have always kept a journal of some sort. I never had aspirations to become a writer, though. I wanted to be a mid-wife, then a doctor, then I didn't know, then a filmmaker. I came upon filmmaking through my love of writing and photography. Filmmaking seemed the natural next step.”

Harmon's novel, “When I was Your Girlfriend” is semi-autobiographical in a way. It is “about a girl kinda like the girl I was, but her life follows its own path. A few of the scenes in the book are drawn from real events that happened in my life, but the main character is her own person.”

Although filmmaking and finishing a novel are obviously stressful and difficult, there is something even harder for Harmon.

“Parenting is definitely the hardest thing I have ever done,” she said. “It still kicks my butt! Juggling parenting, working and trying to have an active creative life would be a close second.”

If Harmon could live anywhere on earth, where would it be and why?

“I would live somewhere warm and cheap, accessible to the beach. I also am enchanted by the southwest. New Mexico and Arizona are just so beautiful to me. They may be too hot in a few years, though! I would love to be able to just write or make films and not worry about money.”

What did Harmon most like and dislike (if anything) about growing up in Mt. Airy?

At Big Blue Marble Bookstore, Harmon will also be talking about her latest novel, “Neither Here Nor There,” a wild ride of a story about Kim, “a typical rebellious black gay nerd, biding her time in college until she can get her dream job at NASA.” Kim is later kidnapped and held in a remote farmhouse as “an unwitting subject of an experiment by the professor she is working for at the lab…" For more information about the Nov. 10 appearance, call 215-844- 1870. You can reach Len Lear at lenlear@chestnuthilllocal.com

The Sculpture Gallery: Fringe at the Circus Campus

Mt. Airy classes for older folks are a real stretch