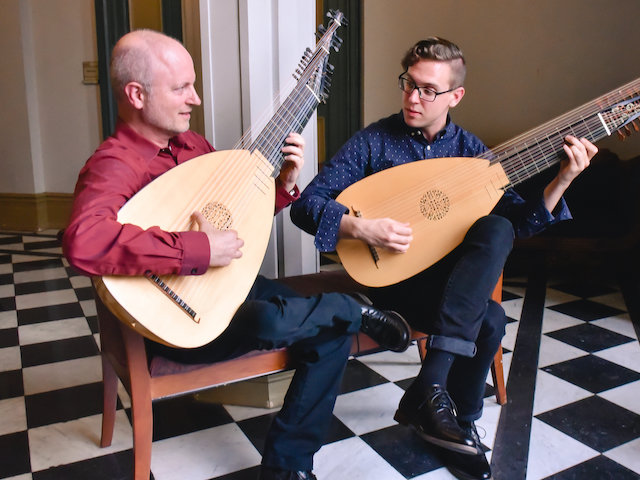 Lutenists Richard Stone and Cameron Welke performed at St. Paul’s Episcopal Church in Chestnut Hill as part of Tempesta di Mare's “Artist Recital Series." (Photo courtesy of Kendra Broom)[/caption] by Michael Caruso Tempesta di Mare, Philadelphia Baroque Orchestra, presented the first performances in its “Artist Recital Series” on Saturday, Nov. 23 in St. Paul’s Episcopal Church, Chestnut Hill, and Sunday, Nov. 24 at 3 p.m. in the Museum of the American Revolution, Philadelphia. The program featured the music of Silvius Leopold Weiss (1687-1750). Four Sonatas, one Ciaccona and one “Tombeau” were played by lutenists Richard Stone and Cameron Welke. Stone and recorder/flute player Gwyn Roberts are co-founders/co-directors of Tempesta. Welke is a student at the Peabody Conservatory of Music of the Johns Hopkins University, where he studies with Stone. Weiss was a contemporary of the two greatest Baroque masters, J.S. Bach (1685- 1750) and G.F. Handel (1685-1759). Although none of the six selections performed Saturday and Sunday afternoons rise to the level of genius displayed by both Bach and Handel in their chamber music, Weiss’ opuses are well crafted and persuasively expressive. Weiss was a master of the intimate gesture characterized by gracious elegance, effortless charm and a suave command over the shape of the individual movements of each score and the structure of their coming together as a unified whole. Interestingly, the four sonatas for two lutes exist as such due to Stone’s efforts. He fleshed out a “second” part from the extant “first” part, the original “second” part having been lost to posterity. The results are Sonatas for Two Lutes in A, D, C and B-flat that are of surpassing fullness of texture, fluency of development and generosity of lyricism. Stone and Welke played them with expert technical dexterity, consummate phrasing and endearing expressivity. Tempesta’s full ensemble will celebrate Christmas with “Carols, Vespers and Sonatas from the Archbishop’s Palace in Kromeriz.” Music of the 17th century for vocal quartet, trumpets, recorders, strings, organ and theorbo from the collection of Bishop-Prince Karl II von Liechtenstein-Kastelkorn will be performed. Two local concerts are scheduled for Friday, Dec. 6 at 8 p.m. in the Philadelphia Episcopal Cathedral, and Saturday, Dec. 7 at 8 p.m. in St. Paul’s. For more information, visit TempestadiMare.org or call 215-755-8776. ADVENT MUSIC The Episcopal Church of St. Martin-in-the-Fields, Chestnut Hill, will present its annual Advent Procession of Lessons & Carols Sunday, Dec. 8, at 5 p.m. St. Mark’s Episcopal Church, 1625 Locust St., Philadelphia, will mark the second Sunday of Advent, Dec. 8, with a Procession of Lessons & Carols at 4 p.m. St. Mark’s is the region’s leading “High Church” Anglican parish. After attending the Choral High Mass at 11 a.m., I stayed in town to attend Choral Evensong & Benediction at 4 p.m. Enhancing the simple beauty of the traditional liturgy of the English Church, music director Robert McCormick led his professional choir in splendid performances of the “Magnificat” and “Nunc Dimittis” from Philip Moore’s Third Evening Service, James MacMillan’s “A New Song” and Malcolm Archer’s “O salutaris Hostia” (O saving victim). St. Mark’s will present an Advent Procession of Lessons & Carols Sunday, Dec. 8 at 4 p.m. The Roman Catholic Cathedral Basilica of Saints Peter & Paul, 18th St. and the Parkway in Philadelphia, will celebrate the second Sunday of Advent with a concert of sacred music Dec. 8 at 3 p.m. The program includes Dove’s “Seek him that maketh the seven stars,” MacMillan’s “In splendoribus” and Gjeilo’s “Ave generosa.” PROKOFIEV ‘5th’ Guest conductor Susanna Malkki led the Philadelphia Orchestra in a pair of concerts on Nov. 29 and 30 in the Kimmel Center’s Verizon Hall. Her program included the Orchestra’s first performances of Betsy Jolas’ “A Little Summer Suite,” Beethoven’s Violin Concerto with soloist Gil Shaham and Prokofiev’s Fifth Symphony. Composed in 1944 with the end of World War II beginning to come into view, Prokofiev’s Fifth Symphony boasts two-quarters of brutalism, one-quarter of fantasy and one-quarter of lyricism. Its outer movements are harsh reminders of the horrors of war: slashing rhythms, crashing dissonances and broken phrases. Its second movement recalls the spirit of his masterpiece, “Romeo and Juliet,” and its slow third movement sings in his distinctive bittersweet melodiousness. Malkki conducted the notes of this powerful score without interpreting the music behind them. Jolas’ “A Little Summer Suite” proffered some interesting sounds but altogether failed to conjure up any feeling of the year’s hottest season. A frequent soloist with the Philadelphians ever since his 1988 debut with them, Shaham offered an elegant reading of Beethoven’s only Violin Concerto. What it lacked in visceral punch it gained in gentle intimacy. Malkki’s command over the accompanying orchestral part was uneven – including an entrance mishap at the start. Music director Yannick Nezet-Seguin will conduct the Philadelphia Orchestra and the Westminster Symphonic Choir in Bach’s “Mass in B minor” Dec. 5, 6 and 7 in Verizon Hall. ‘NUTCRACKER’ Pennsylvania Ballet will present “The Nutcracker” Dec. 6-31, matinee and evening performances, in the Academy of Music. Balanchine’s thrilling choreography to Tchaikovsky’s immortal score has long been a local Christmastime favorite. Visit PABallet.org for more information.
You can contact NOTEWORTHY at Michael-Caruso@comcast.net. Click here to read more of NOTEWORTHY online.